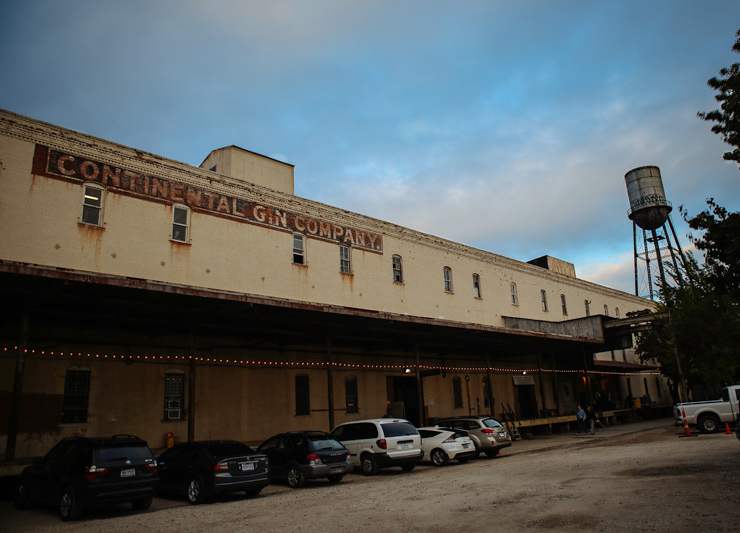 The exterior of the Continental Gin Building, which was recognized in the National Register of Historic Places in 1983, is a hodgepodge of painted brick, weathered wood, aging concrete and rusted metal. The largely unchanged exterior of the Deep Ellum building is a reminder of its former life as the largest manufacturer of cotton processing equipment in the United States.

A tour through the interior these days, however, quickly reveals its rebirth as one of the area's most important sources of local art. The building's three stories house studios for more than 40 area artists, each with a unique style and technique. And, this past Friday and Saturday, in celebration of the building's 25th anniversary as a studio hub, said artists opened their studios to the public, giving attendees a glimpse into the creative minds of the 125-year-old buildingâ€™s tenants.

It was a well-attended affair, and Bob Nunn, an original resident of the building and a longtime advocate for the arts in Deep Ellum, sat calmly in his studio amid the chaos of bodies around him on Saturday, impressed with the turnout.

“We had quality people,” he said with a smile. “We had interested people — not just kids who want a free drink and a snack.”

Indeed, the prestige of the resident artists foiled the typically low number of serious buyers that plagues most shows in the area. Both established and undiscovered talent proudly displayed their works on the stark white walls of the space — and took especial pride in the pieces adorned with prized “sold” stickers affixed nearby.

Artist David McGlothlin wowed visitors with his use of an everyday item in his work — notably brown paper bags. As he weaved through his crowded studio to point out specific pieces, he explained his inspiration: “I was trying to figure out something to put on my kids' lunch bags,” he offers. The result is a series of highly detailed images printed on individual bags or tiled to utilize a number of bags to form a larger composite work.

On the top floor, photo-realist painter Ty Milner stood in front of the largest canvas in the building — a 180-degree panoramic view of downtown Dallas. He spoke about his “labor of love” in a nonstop loop as the continuous column of admirers poured through his studio's entrance. The precise rendering of Dallas, painstakingly done on a 15-foot-by-4-foot canvas, began in September 2012 and remains only an estimated 65 percent complete due to the scale and the detail necessary to complete it; the piece is the composite of a small portion of the 833 photos taken by fellow tenant Heather Helen Ray through the clear glass canopy of a helicopter rented for $833.

In a first floor studio separated from the main entrance, painter Daniel Emmerick Pedigo joked about scaring people off with his lack of sleep and his unique style of art, which blends classical style with influences from horror, sci-fi and artists such as Odd Nerdrum. His space was adorned with larger canvases, the sort which take time to paint and even more time to perfect.

“I wanna be one of those guys that takes his time,” Pedigo said, pointing at the first piece in his new series. The work, which looked finished to untrained eyes, was apparently only halfway complete. Pedigo estimated that his new series, focusing on lake themes and specifically White Rock Lake, where he grew up, would take around a year and a half to finish.

Emerging artist Karla Ceballos, dressed as Jackie Onassis in a pink dress, pink pill box hat and white gloves, received mixed reactions for her JFK portrait hanging in the hallway outside her third floor space. The unmistakable image of Kennedy was marred by visible and bloody head and neck wounds. The walls surrounding the piece were marked by red fingerprints, the result of passersby who felt compelled to touch the still wet wounds. But Ceballos was visibly pleased with the evidence of interaction with the painting. Her choice in using JFK imagery was based on the reactions it would surely generate.

The intimate space rented by Andrea Guay was decorated with oils on canvas and a number of pieces from her latest body of work printed on thin metal sheets. She uses what she describes as “modern day techniques” that combine photography, printmaking, painting and a number of methods to create stunning and visually distinct pieces. Guay said she relies on a range of intentional and unintentional experiments to produce her work, and A number of her most impressive pieces were what she called “happy accidents,” including a mistake at the printers which led to the wrong piece being placed on a copper plate. Although the work of art originally intended for the process has yet to be recovered, the resulting error led her to a new series of experiments and a new approach to her work.

Dozens of other tenants lined the walls of their workspaces and hallways with photography, paintings, jewelry, prints, sculptures, clothing and virtually anything else that might be crafted in the creative process.

Photographer Leonard Volk filled the walls of his studio with his exceptional framed photographs, while the tenants of the fully furnished space belonging to Studio20Three used a mere fraction of its area to peddle a range of greeting cards with themes such as “I love you more than donuts.”

The red double doors of Heather Helen Ray's space led visitors inside to inspect her photographs of flaming objects. They were hanging neatly under a lit sign reading, “Take a photo it last longer,” with a minor grammatical correction added in and stuck to the wall above.

Sculptor Michael Sutton created the pieces he displayed as an attempt to replicate the urban environment just outside the building: “I love decay and the way it makes things look,” he said. Using a technique he developed over many years, he created effects on metal and glass with a variety of chemicals and patinas to make the precise technique appear accidental.

In the space directly above, the artist and trash makeover specialist known as VET peddled dumbbells made of CDs and bowls made of LPs outside of a space that looked more like a flea market than a studio.

The biannual event continues to serve as a successful method of uniting a community of artists with admirers and prospective buyers. And, of equal importance, it allows them to focus on creating more artwork for the remainder of the year in order to sustain the art scene in Deep Ellum for the next 25 years to come. 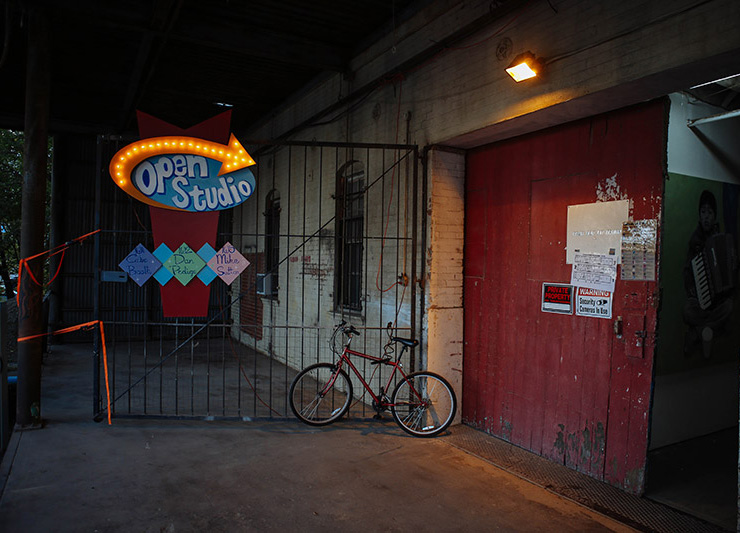 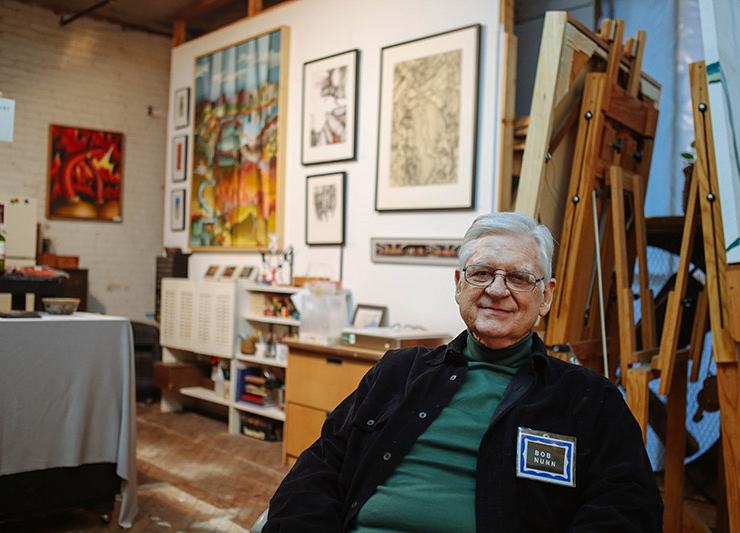 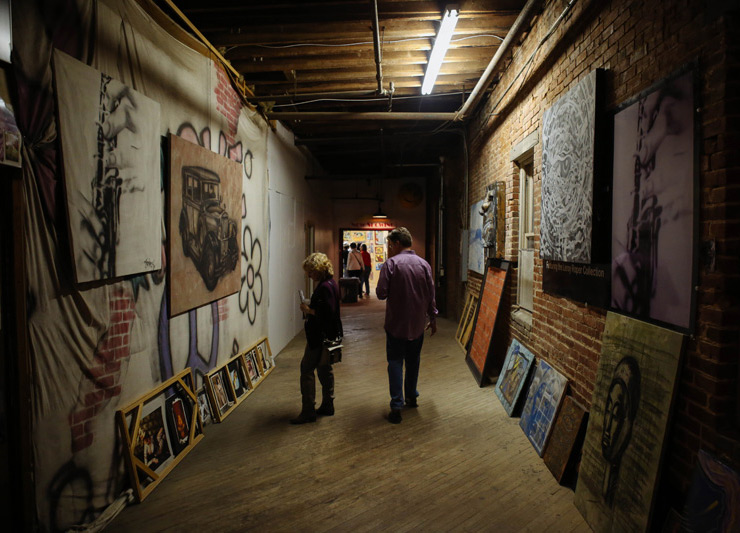 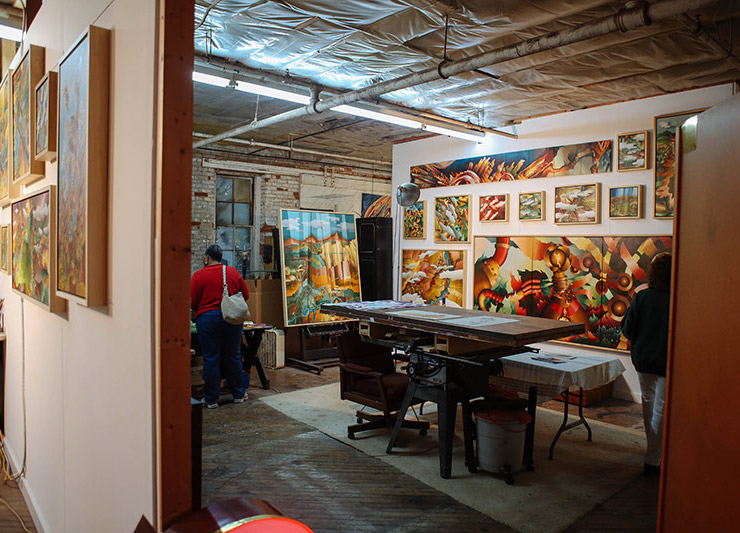 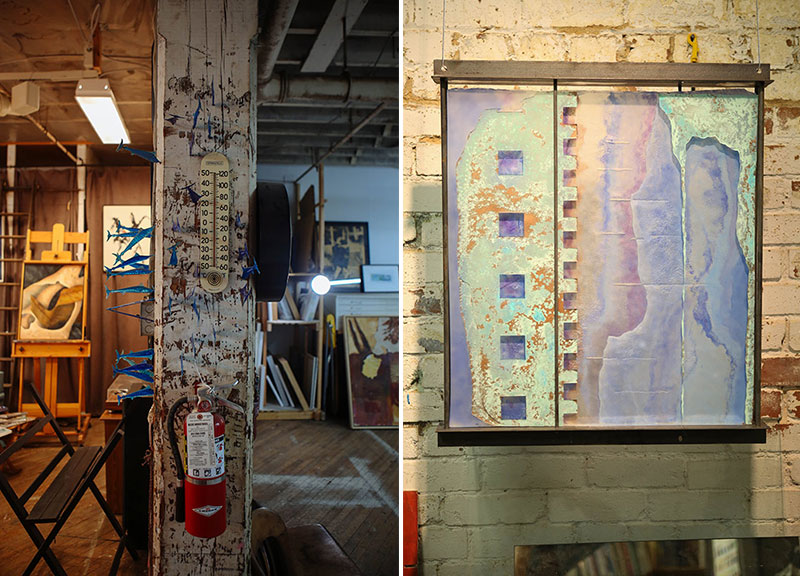 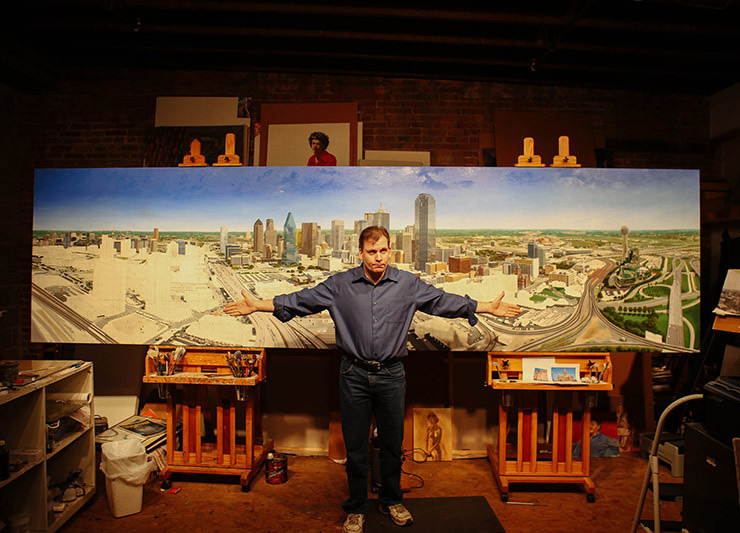 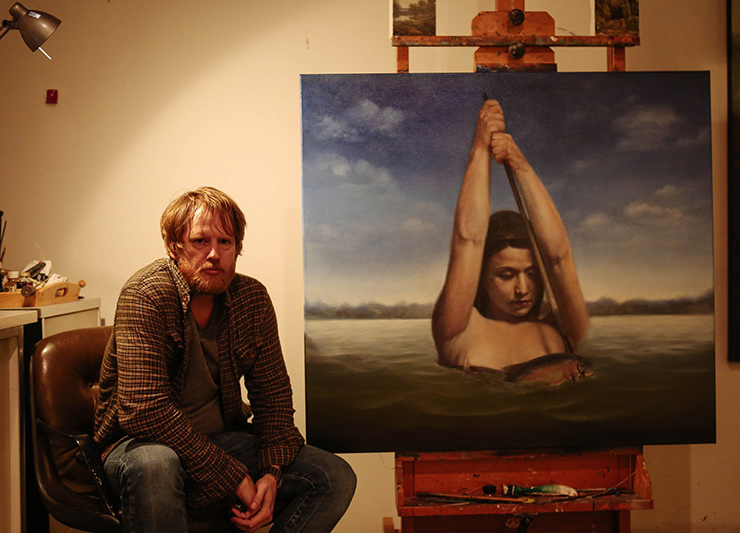 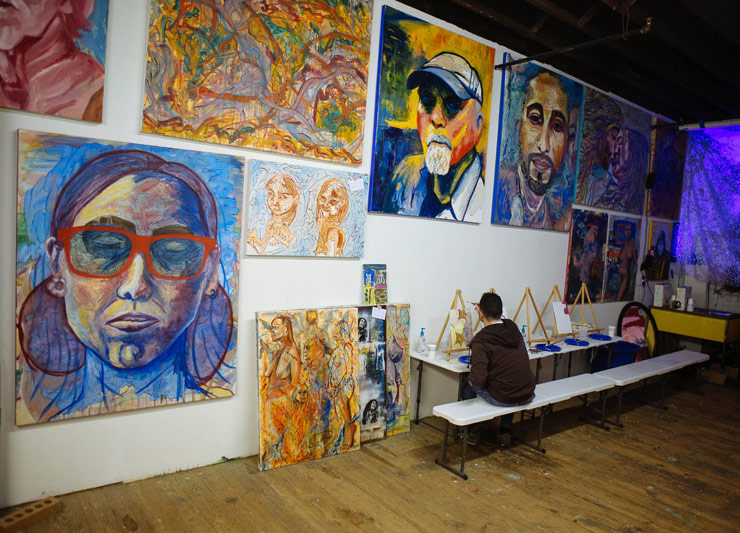 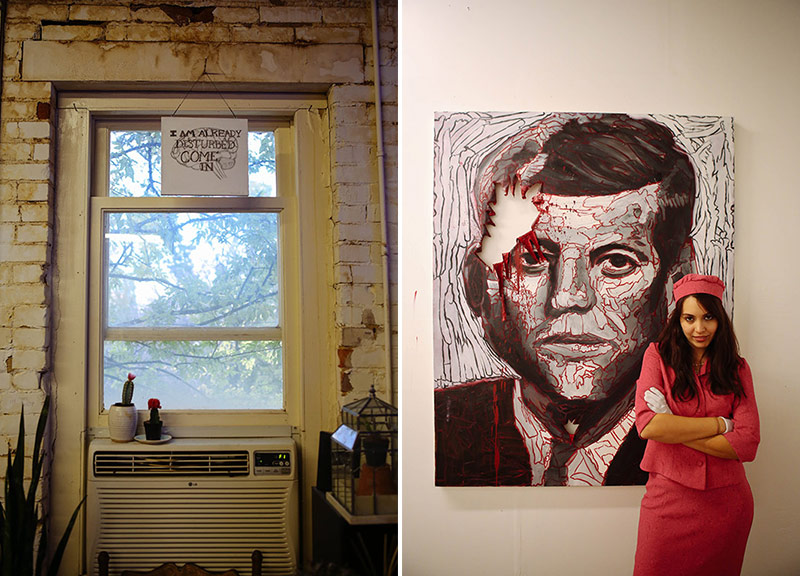 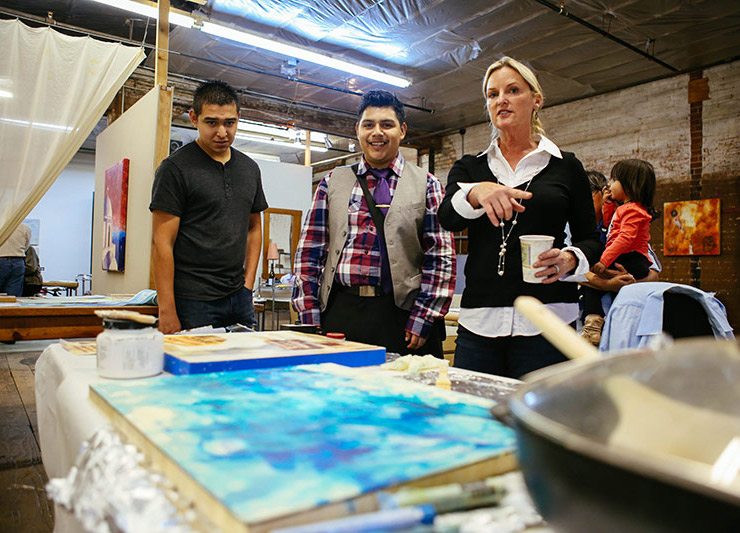 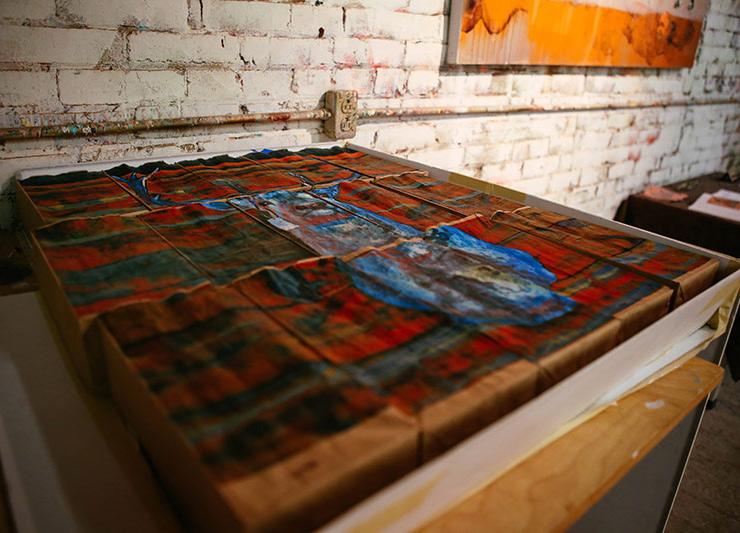 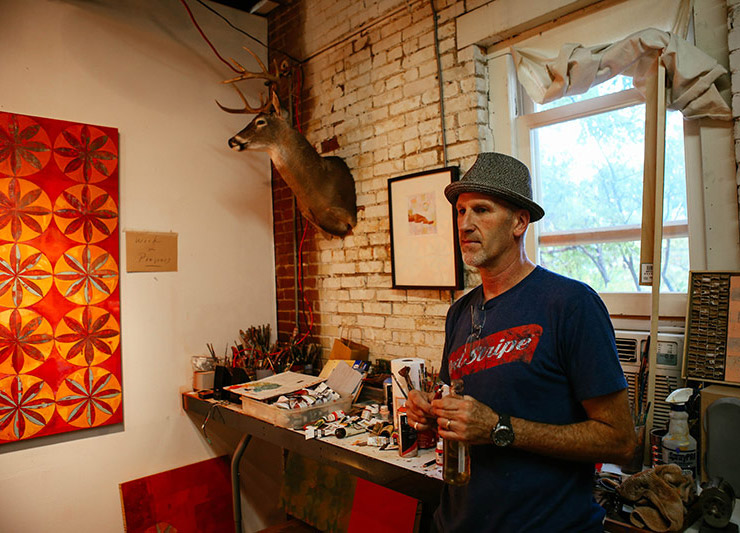 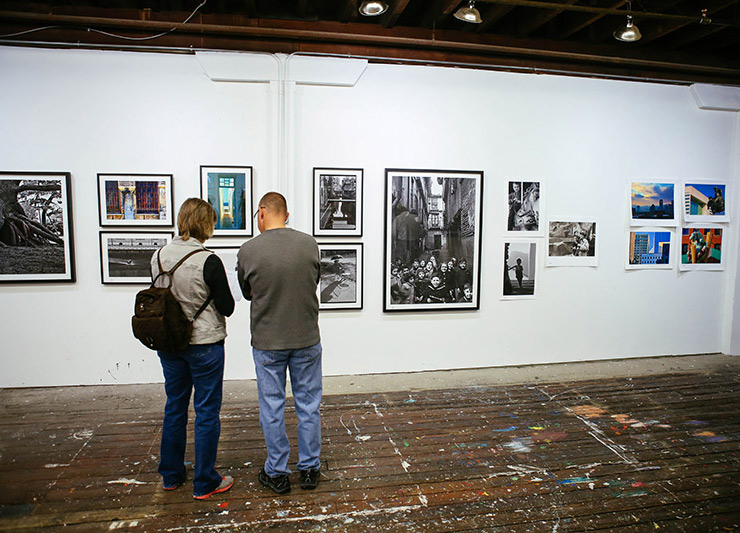 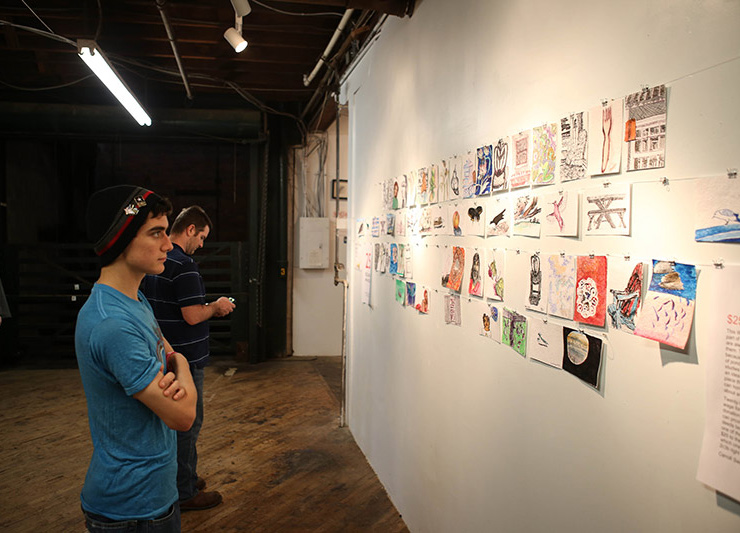 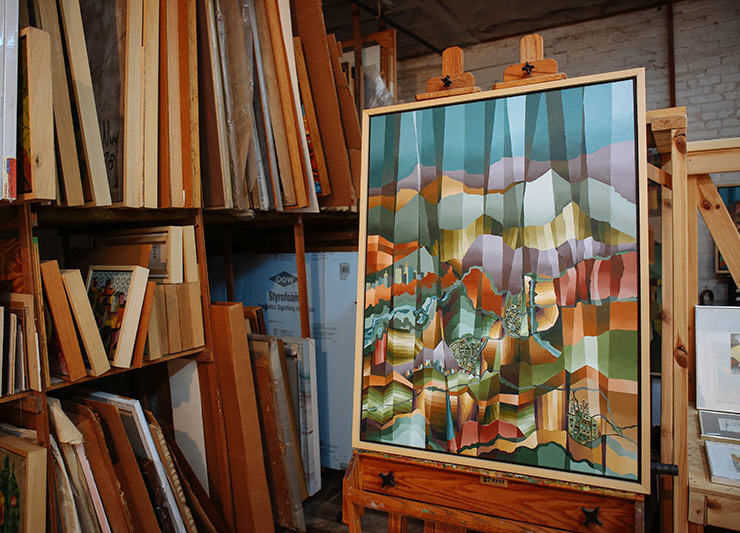 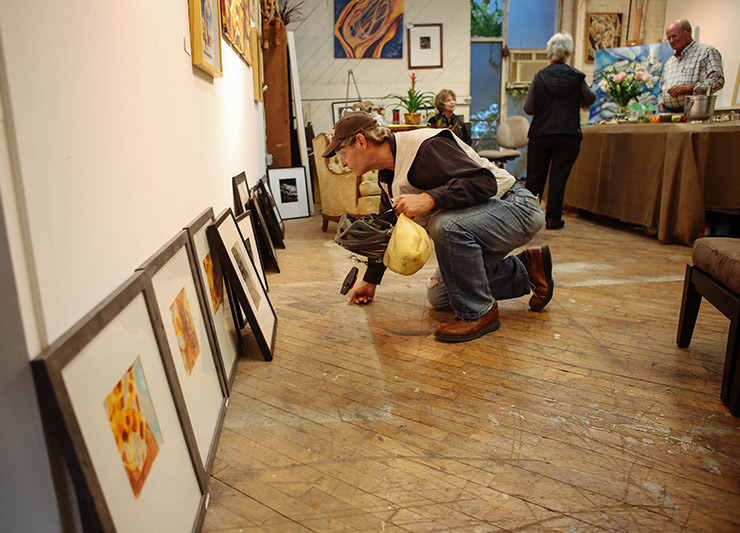 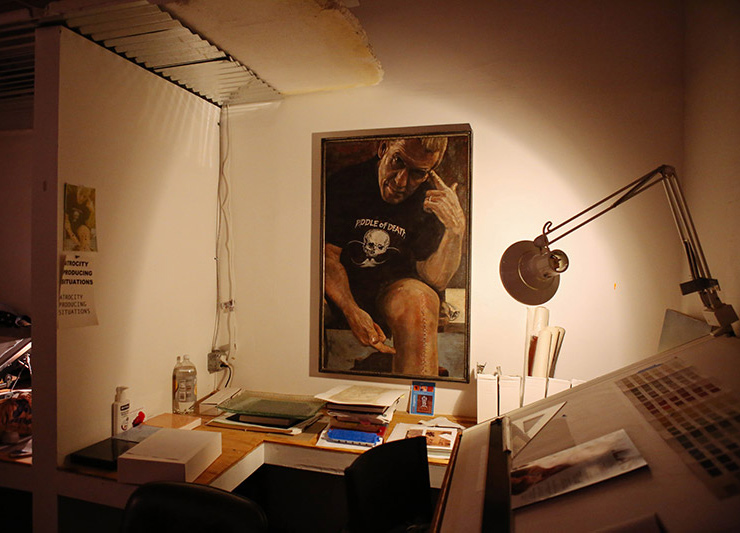 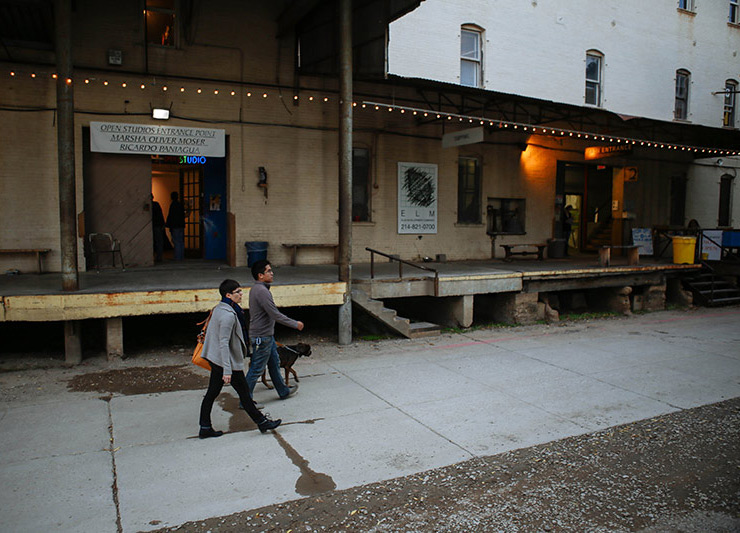