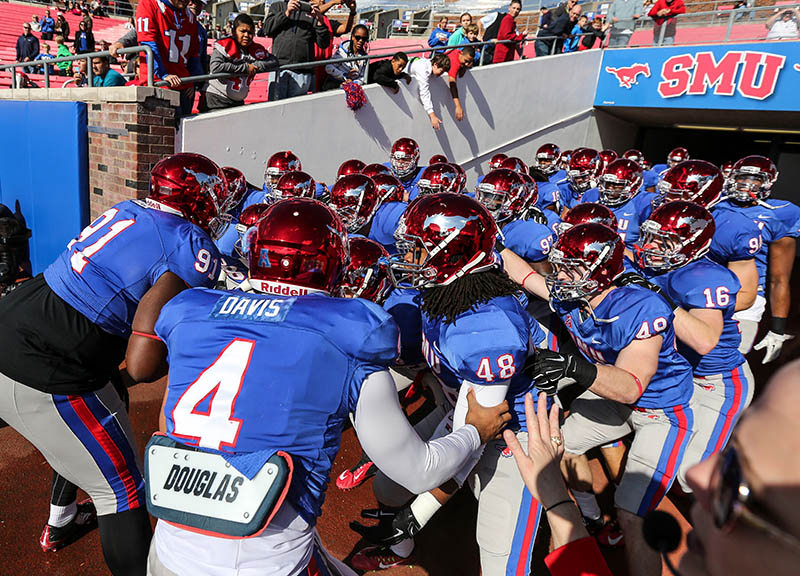 SMU's Injury Woes Aren't Helping The Team's Chances Of Getting A Win This Season.

Here's a harsh truth: The Southern Methodist University football team just doesn't have the players it takes to win a game. Not in the NCAA's Football Bowl Subdivision, at least. And certainly not with the number of injuries this team is being forced to deal with at the moment.

“The problem is we're so beat up,” interim SMU head coach Tom Mason said after his team's 35-9 loss against Houston — yet another game in which his team finished the second quarter with the lead, only to watch it dissipate in the second half .”We've got 16 kids out for the season. And I've never been around a team like that.”

Specifically, the Mustang defense is about as depleted a unit as it could possibly be. SMU only had two active cornerbacks going into Friday's game. In turn, sophomore wide receiver Nate Halverson was converted to play the nickel corner role as needed. And although it never got to that point, Halverson eventually did enter the game in his traditional wide receiver on the Mustangs' final offensive drive — only to then suffer a game-ending injury of his own.

No, it wasn't pretty. After the game, Mason acknowledged as much, saying that his team nearly reached a panic point when senior safety and “field general” Hayden Greenbauer left the game due to an injury of his own. Luckily, Greenbauer was able to re-enter the game and resume his play-calling duties on the defensive side of the ball.

But here's the thing: Even with the injuries SMU had to battle through in its secondary specifically, Houston couldn't particularly prey on the that weakness. Instead, the Cougars bruised the front seven — yet another Mustang unit missing a key part, in this case senior linebacker Kevin Pope. In turn, the Cougars racked up 282 yards and five touchdowns with its rush attack.

“We wore out a little bit on defense and couldn't get anything going offensively,” Mason said after the game.

Sophomore quarterback Matt Davis, who earned his starting spot after sophomore Neal Burcham, junior Garrett Krstich and freshman Kolney Cassell went down with injuries earlier in the season, tried to do what he could in that regard. Individually, he accounted for 96 percent of the Mustangs offensive yards on the ground and through the air. Davis certainly struggled throughout the afternoon with his accuracy and reads, but, for the most part, he worked miracles with his scrambles. At times, he appeared to be running for his life, but his ability to avoid a pass rush and skirt through a secondary remained one of the team's very few highlights. Davis' backfield mates contributed little to the cause. Sophomore Prescott Line and juniors K.C. Nlemchi and Luke Seeker combined for all of 13 rushing yards on a total of 10 attempts.

At this point, the Mustangs look as down-and_out as an 0-11 team can look.

But has a saving grace just arrived? Later today, it will be announced that SMU has hired University of Clemson offensive coordinator Chad Morris. Morris is a Texas native and Texas A&M graduate with longstanding ties to the state from his days as a championship-winning high school coach. The hire should help smooth over some local recruiting woes that have marred SMU's progression.

Before recruiting hits full stride, though, SMU still has to travel to UConn for a matchup next week. Then, mercifully, this nightmarish season will come to its close.

Houston running back Ryan Jackson (22) runs in open space through the Mustangs defense. Jackson averaged 5.7 yards per carry for 63 yards.

SMU defensive back Jesse Montgomery (10) drops back into coverage against a Houston Cougars wide receiver.

Houston running back Ryan Jackson (22) runs through an arm tackle by SMU defensive back Jesse Montgomery (10).

Houston running back Kenneth Farrow (35) runs for a touchdown in the second half against the Mustangs.

SMU quarterback Matt Davis (4) attempts a pass against the Houston Cougars. Davis finished the game 13-27 for 145 yards and zero interceptions.

SMU safety Darrion Richardson leaves the field with an injury to his shoulder. SMU has been depleted by injuries this season with 16 Mustangs out for the year.

Houston quarterback Greg Ward Jr. dives into the end zone for his third rushing touchdown of the game against SMU.

Houston running back Kenneth Farrow rushes in the end zone for his second touchdown of the game. The Houston Cougars defeated the SMU Mustangs 35-9. 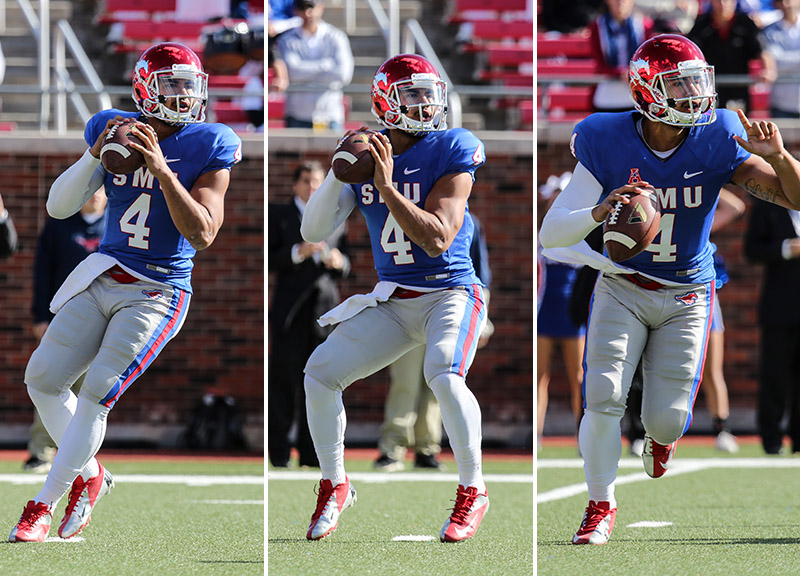 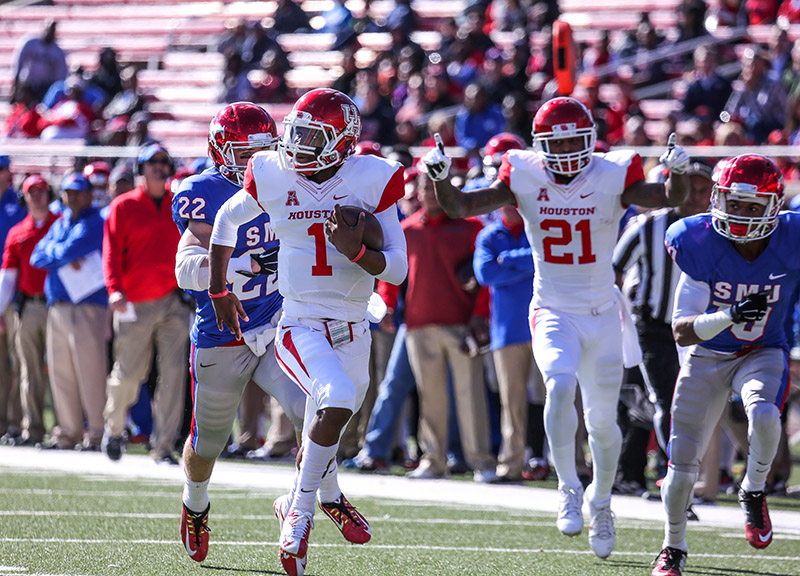 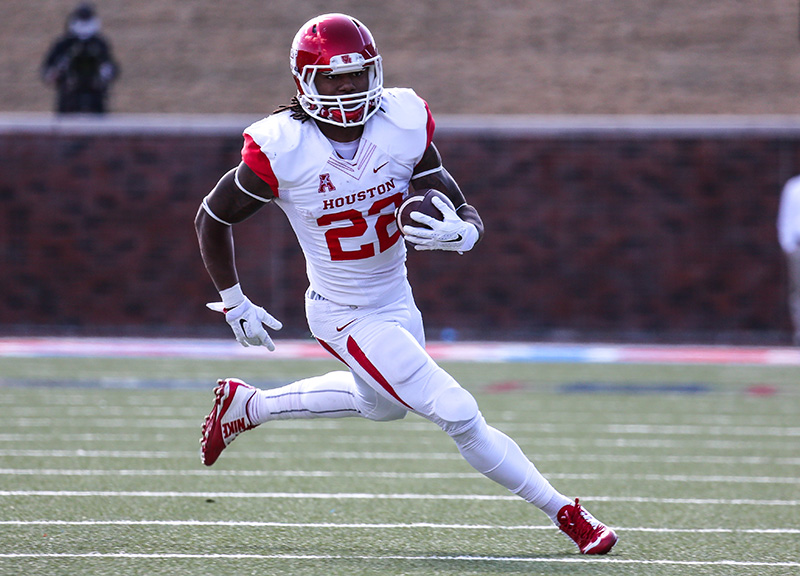 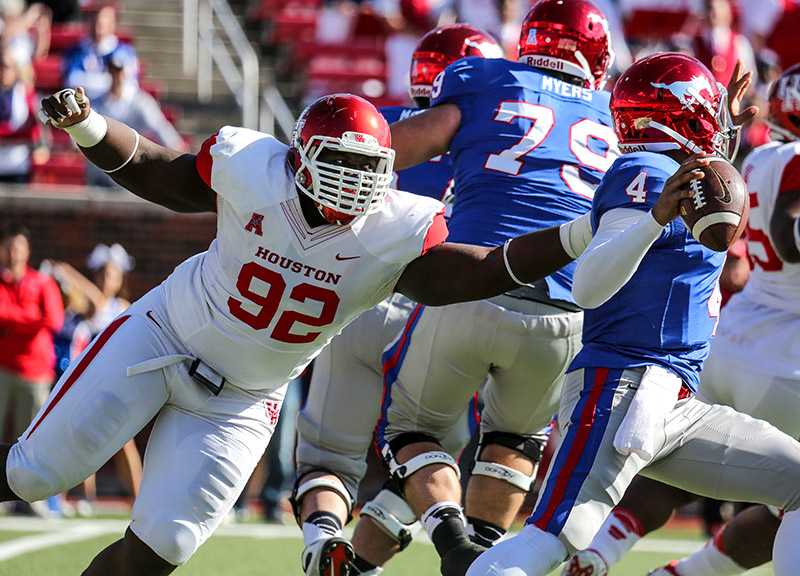 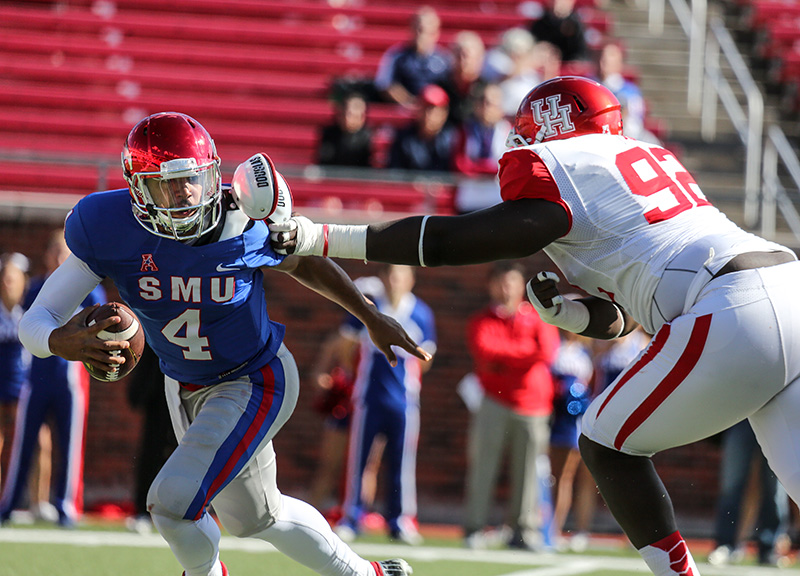 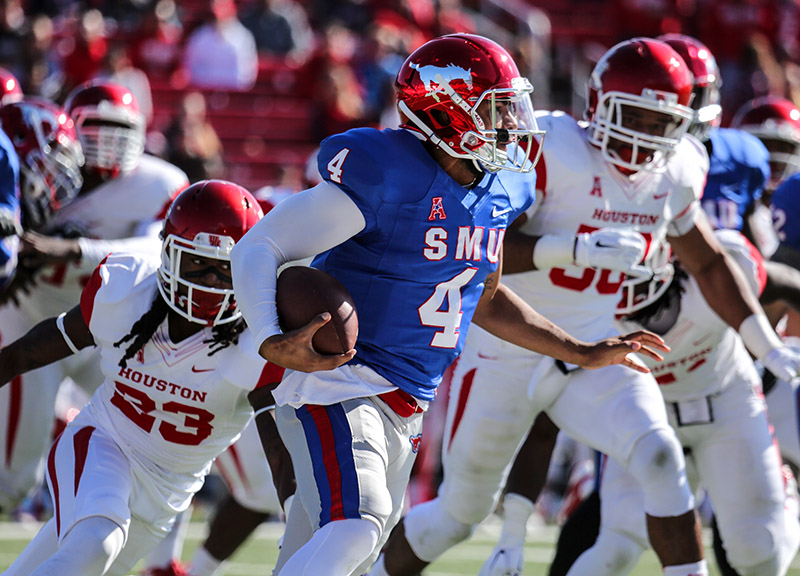 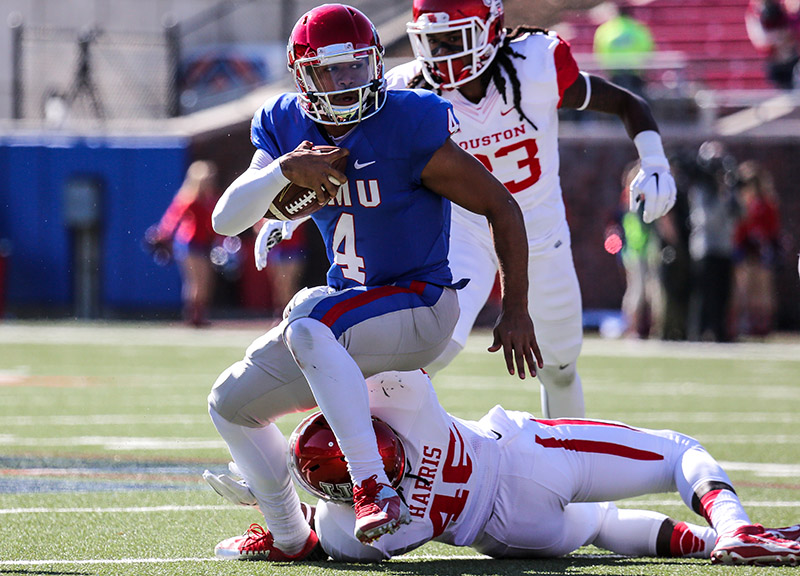 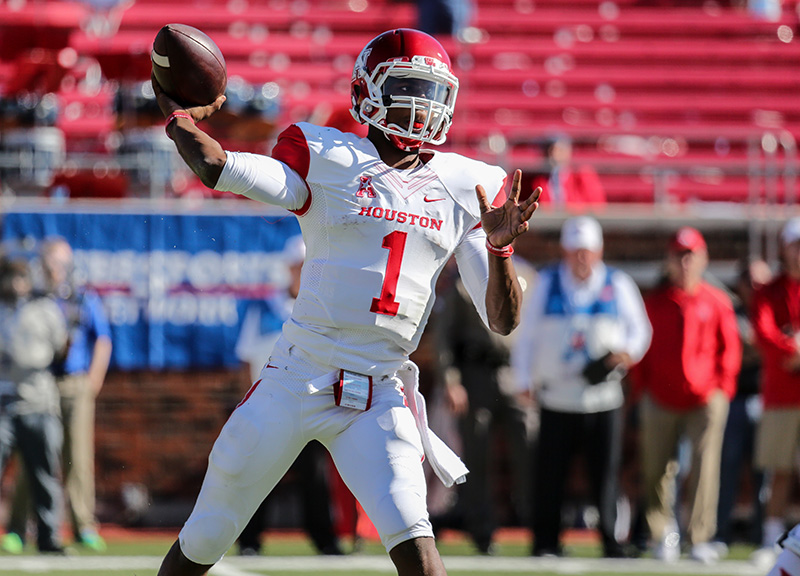 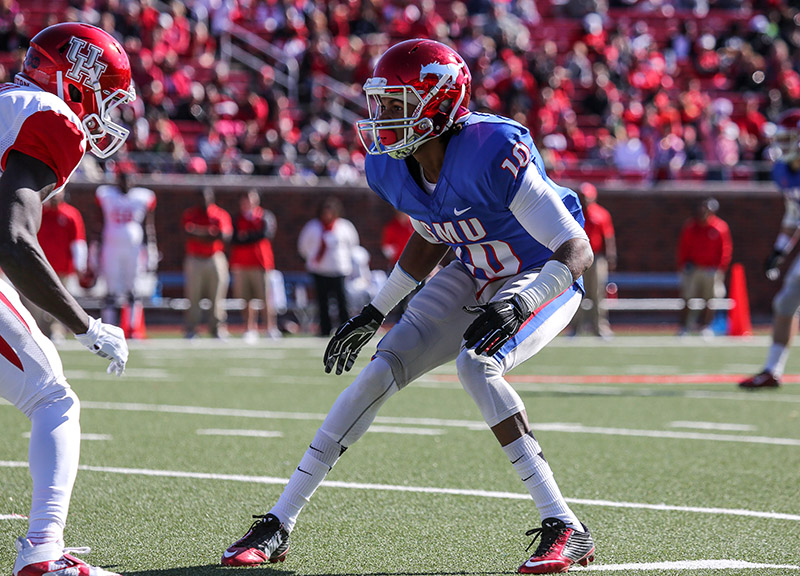 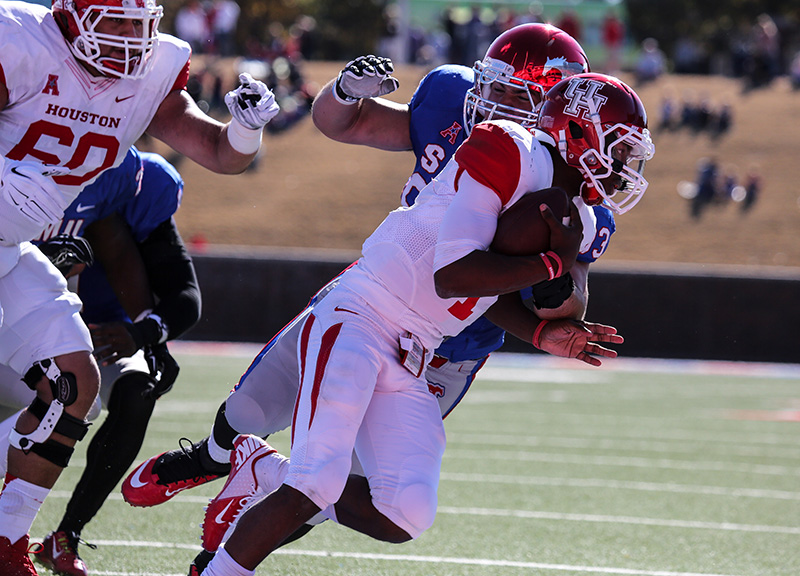 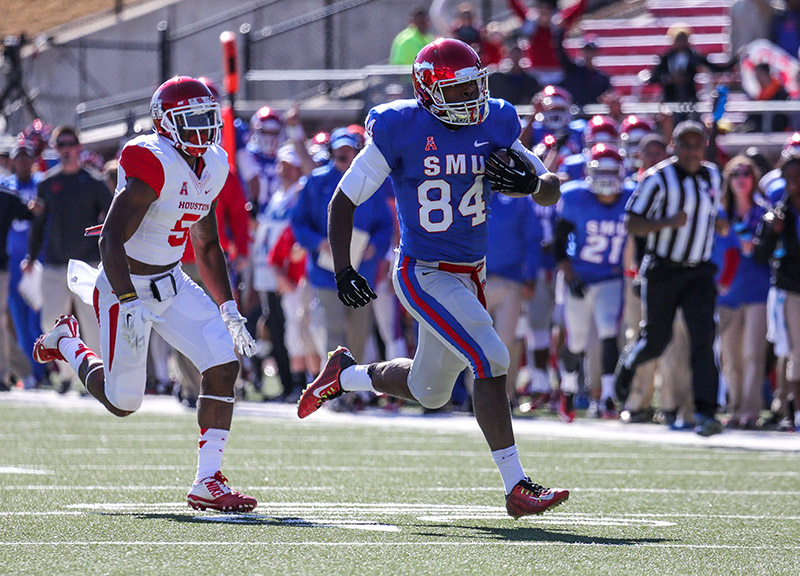 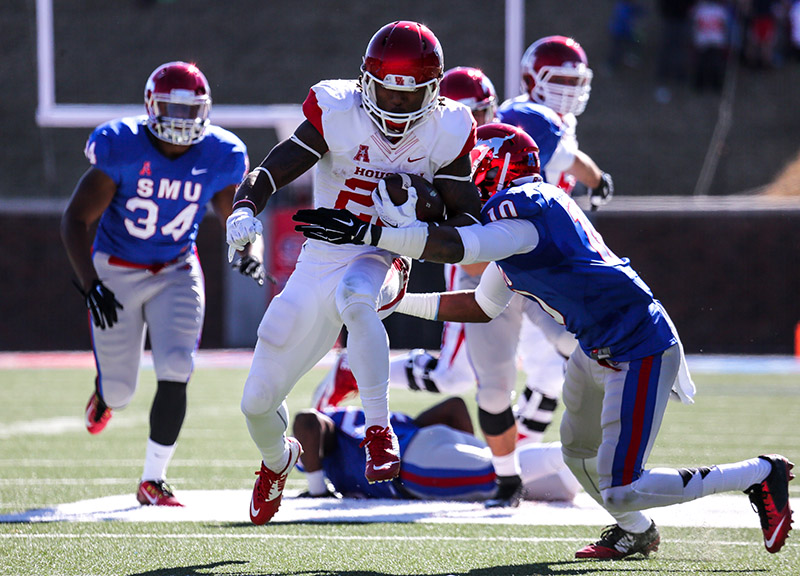 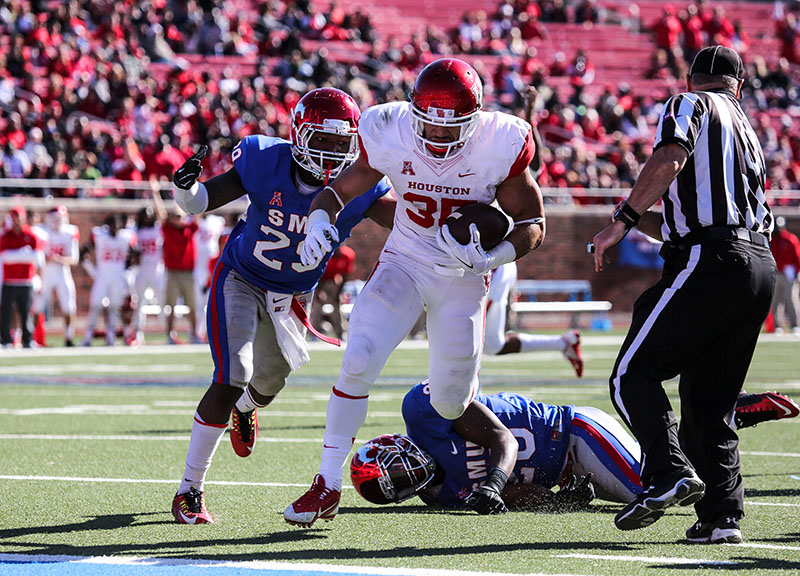 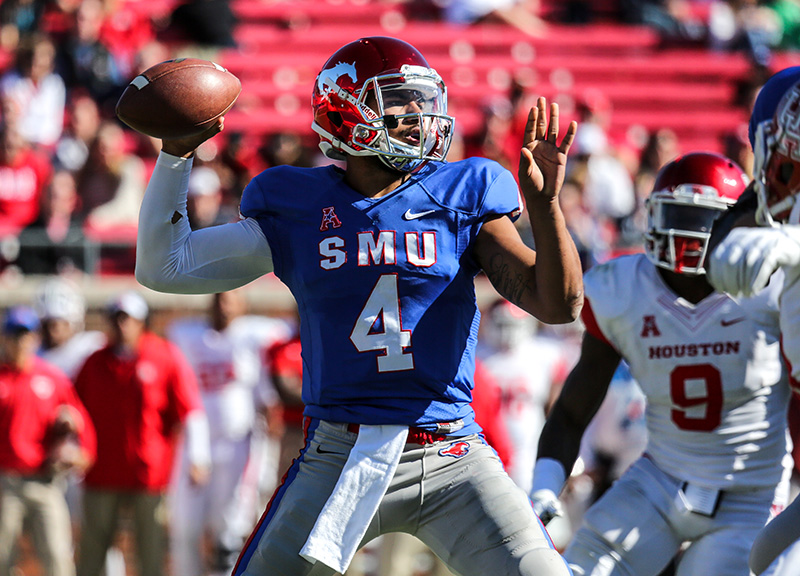 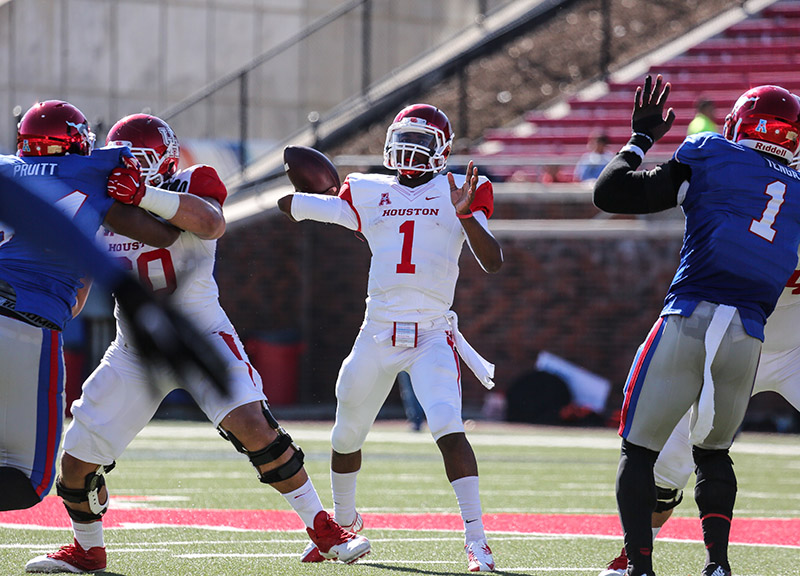 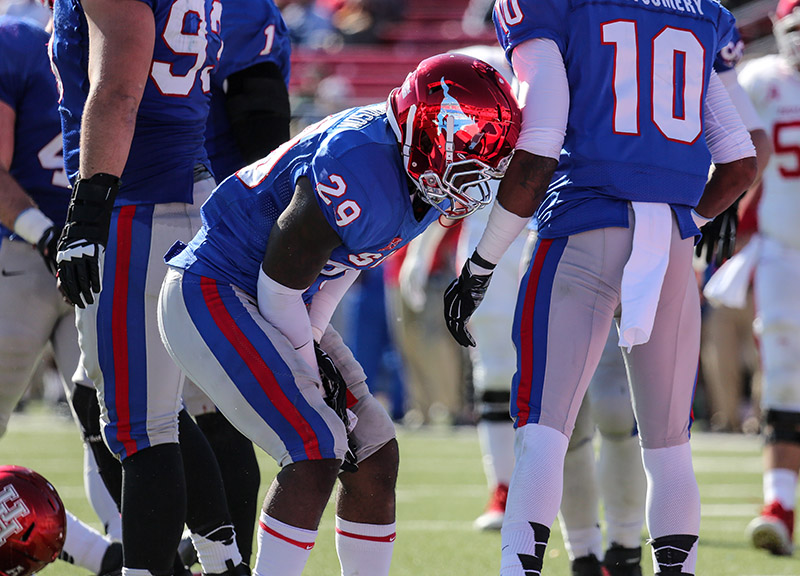 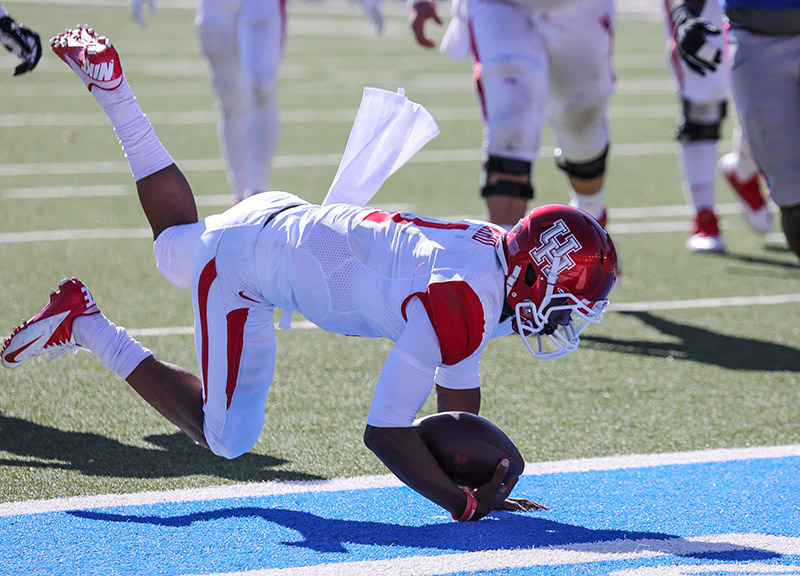 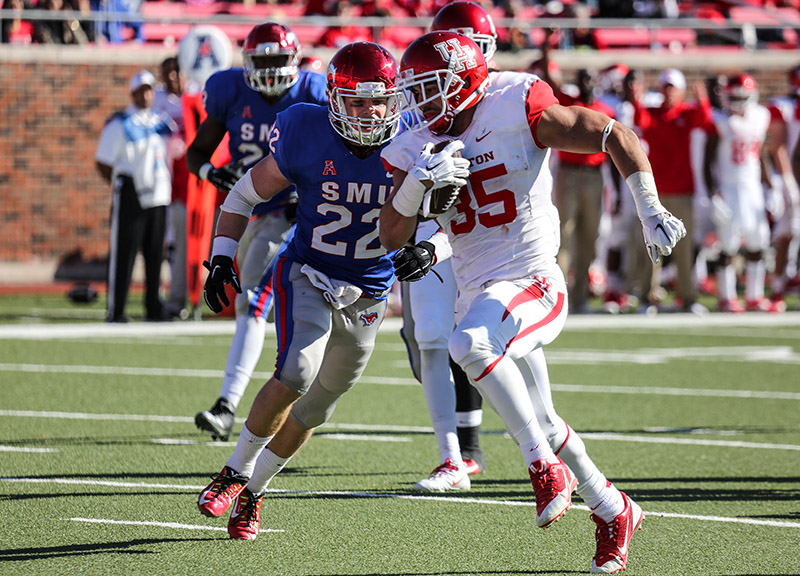