In Living Colour Studio Celebrates Black Culture In Its Teachings. 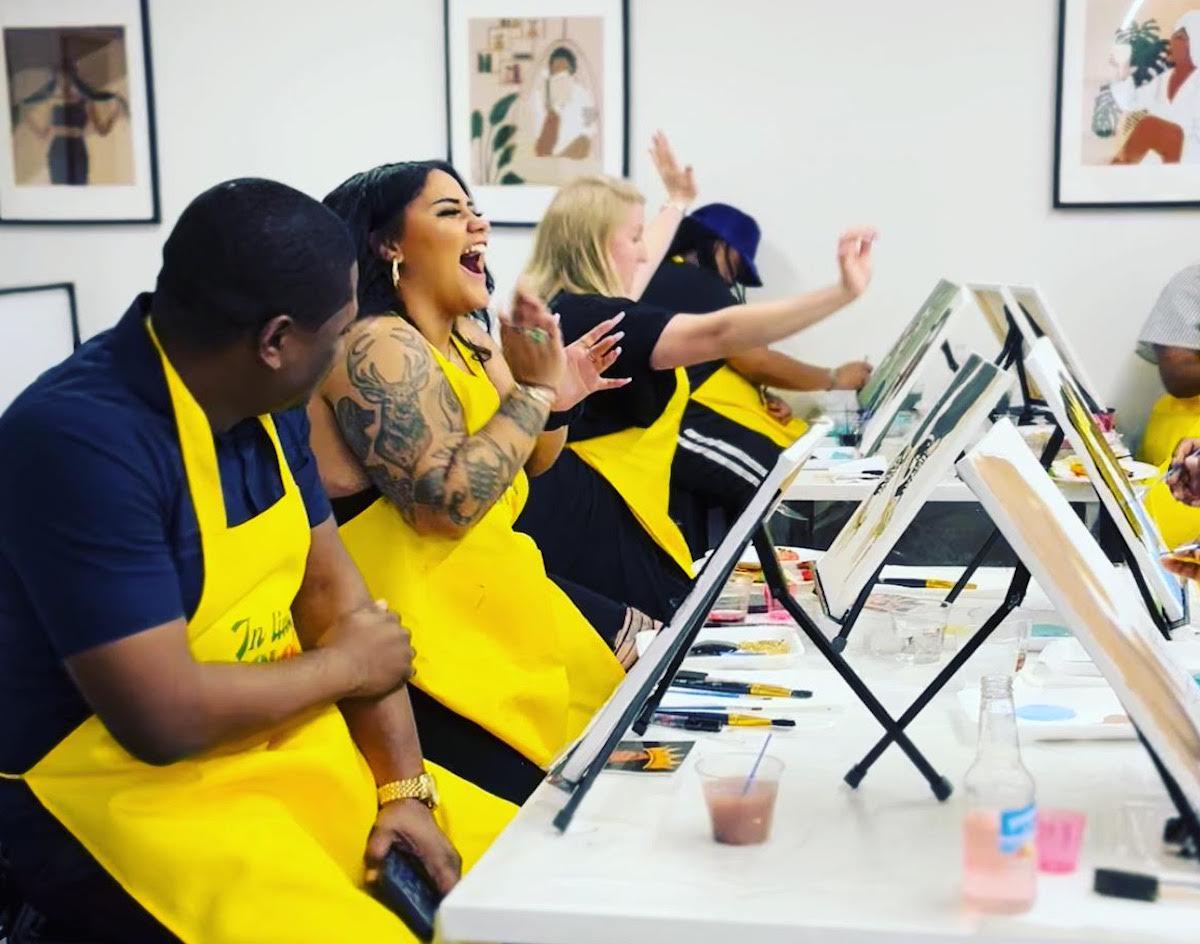 The Owner Of The Family-Friendly Studio Went From Holding Art Lessons On Zoom To Opening Her Own Headquarters.

At the beginning of quarantine, Las Colinas resident Lolita Potter found herself among 13 tiny screens on a Zoom call and leading her family members through a painting class. Within a year, she opened the doors to In Living Colour Studio to bring the same artistic excitement to more than just her family members.

In Living Colour hosts virtual, mobile and private paint & sip parties, as well as sell party paint kits. Its purpose is to bring community together by creating art together, but it stands it stand out from regular family-friendly art studios. In Living Colour, attends are given freedom of expression and representation.

Located on McEwen Road in Farmers Branch, Potter dreamed of the name “In Living Colour” in April 2020 but didn’t have anything to use it for. After receiving positive feedback from her first art students, her son insisted she turned her newfound hobby into a business, using the name she had dreamed of early on.

“We had the best time,” Potter says. “It was so fun. [My son] was like, ‘Well then, since we had so much fun, don’t you think other people might want to do a paint and sip with their families at home?’”

In Potter’s studio, she fosters an environment where Black people can paint images that represent their identities — instead of the normal nature paintings like other studios.

“A lot of times, as a Black woman, you don’t get the opportunity to go into different art spaces and paint canvases or pictures that look like us,” Potter says.

One of the studio’s regulars is Lauren Kelly Scott of Fort Worth, who’s been attending since the start of last summer. She says In Living Colour is a gem that’s perfect for baby showers, birthdays, book signings or any other celebratory occasions.

“When I tell you the vibes, intentionality of building relationships and creating a space to be who you are unapologetic is what In Living Colour is about for Dallas,” Scott says.

Potter also uses the space as an environment for people to practice self care, both emotionally and mentally, while creating their newest piece of art. Typical art studios tend to give participants blank canvases for students to follow along to an instructor, she says, but she wants to give them the freedom to just create.

“Even if you aren’t an artist, you become one when you come here,” Potter says. “The canvas is just like a big coloring book. You’re just using paint.”

When guests pop into the studio, Potter greets them by introducing herself and giving some background on the studio. She then leads them to the paint room where their supplies are set up and ready to go.

“I’m very personable, so I treat everybody like they’re my family,” Potter says. “[…] It’s like, when y’all come in, I’m going to welcome. I’m going to talk to you like I’ve known you for years.”

Once they’re settled, she turns on the music for guests to begin plastering paint on their canvases. When they’re complete, they can go into the photo booth to show off their creative masterpieces before heading out.

“I prefer you to be creative on your own, but sometimes people don’t know which direction to go, so I kind of give them that push,” Potter said.

Before opening her doors, Potter said she was fearful about stepping out of her stable teacher’s income to enter the unknown. But since then, she’s learned that although it was a challenge, it’s where she is meant to be. To keep things exciting, she holds themed events in the studio, including daddy-daughter painting dates and a plant and paint class — where participants can paint a “dope mannequin plant pot.”

She’s particularly looking forward to her upcoming neo-soul paint and sip that’s happening in early May, where Melanin American will be singing. Her events this week include Artist Therapy Thursday featuring Erykah Badu’s tunes, Martin Trivia on Saturday and the plant and paint event Sunday.

In the future, she plans to open more In Living Colour locations, both in the Dallas-Fort Worth area and outside the metroplex.

“It’s not like your normal paint and sip,” Potter said. “You feel like you’re at home and amongst family, and I want everyone to experience that.”