I Tried The Impossible Burger At Hopdoddy Burger Bar. 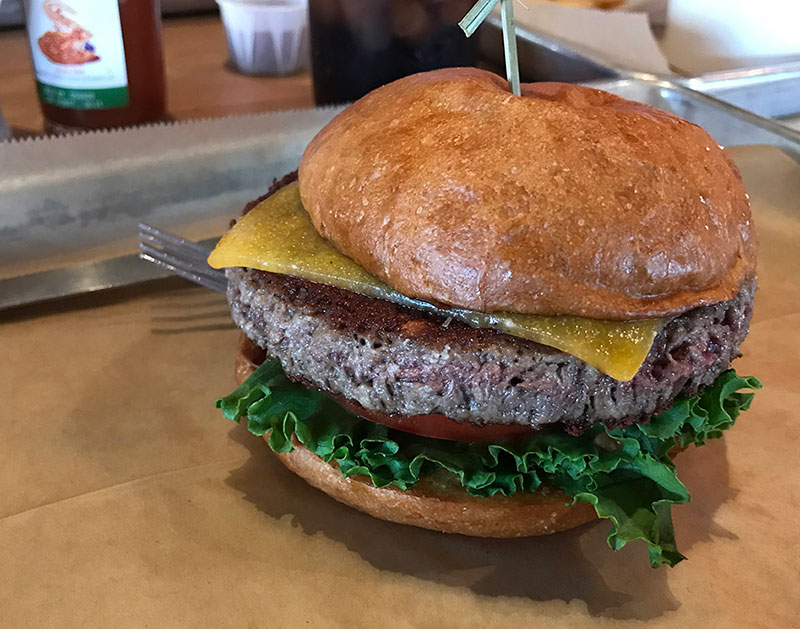 The Impossible Burger At Hopdoddy Is Turning Heads As The So-Called Most Meat-Like Vegan Burger Ever. Which It Kinda Is, Although It’s Expensive As Fuck.

First things first, let me just say this: In general, I am not really much of a hypebeast. For one thing, I’m just usually not in the loop about anything new that’s coming to Dallas. Honestly, I didn’t even know In-N-Out was moving in a few years ago until a bunch of my friends jumped on the California franchise’s bandwagon and began raving about its offerings in my vicinity.

That being said, I love me the fuck out of some burgers. All burgers, too. Beef burgers, turkey burgers, black bean vegan burgers. Honestly, you name a burger that we have around these parts — there are so many good ones, too! — and chances are I’m all about it.

So when my vegetarian/vegan-leaning/burger-loving girlfriend caught wind that the so-called Impossible Burger was coming to Dallas, she and I both agreed that we were damn sure going to try this burger as soon as we could. We have a hard enough time finding burgers she can eat without making any dietary sacrifices, so we were both pretty excited about trying it the very first Friday (June 23) that the burger was available in Dallas.

Unfortunately, once again, I was somehow late to the party: After a short wait in a line at the Addison location of Hopdoddy Burger Bar, one of the workers there notified us that they had run out of burgers — because of course they did; even on the very first day the burger was available in the city, I naturally found a way to miss out on the early-bird train.

Fortunately, I had better luck the following Monday. This time, we made sure of it, calling ahead to Preston Center’s Hopdoddy location, where a worker told us that, yes, they had plenty in stock. And so our journey for this impossibly meaty vegan patty was nearing an end.

But could this burger live up to its hype? 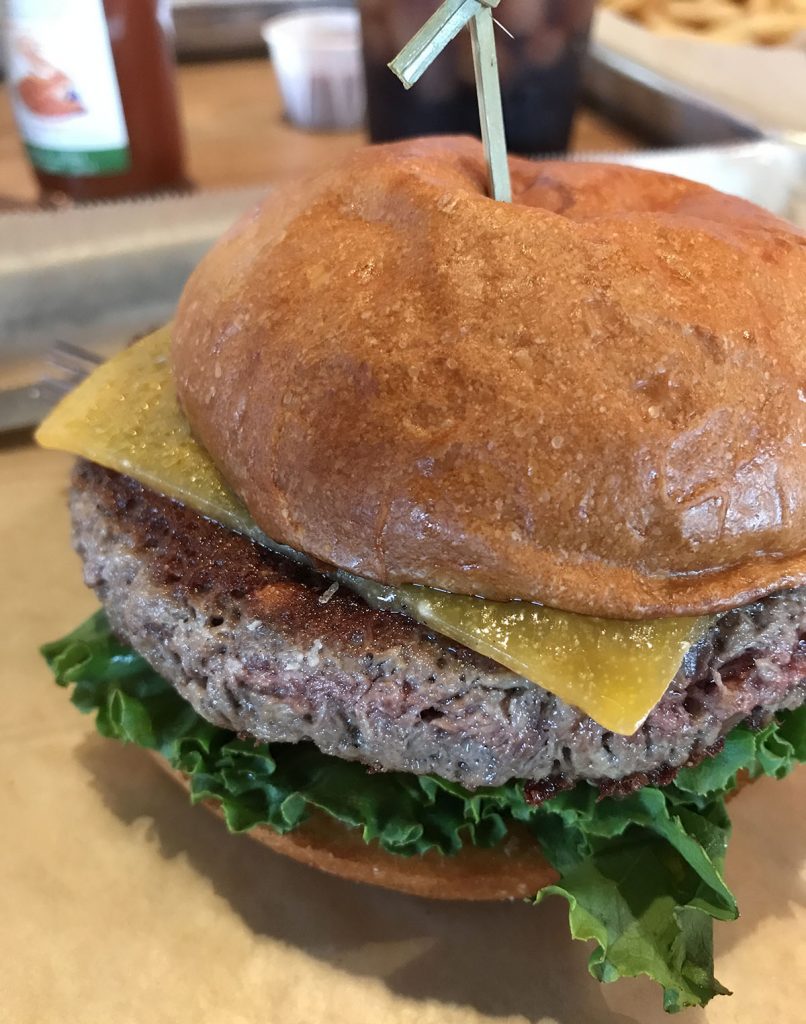 If the bar for veggie burgers is that they should taste like meat, well, that’s a just really shitty benchmark. Because, listen, there are thousands of shitty, overcooked and under-seasoned meat burgers in America — and they shouldn’t get a pass just because they’re meat burgers.

Hopdoddy, much to its credit, does its burgers right — even its meatless ones. It serves up its Impossible patties on lightly toasted buns with “sassy” sauce, cheddar cheese, tomato slices, white onions and a leaf of lettuce.

At first bite, I realized that the makers of this burger managed to craft a patty that is able to crisp on the outside while retaining a moist center. Most veggie burgers either crisp and dry all the way, or they stay soggy when undercooked — a sacrifice often made for the sake of moisture. 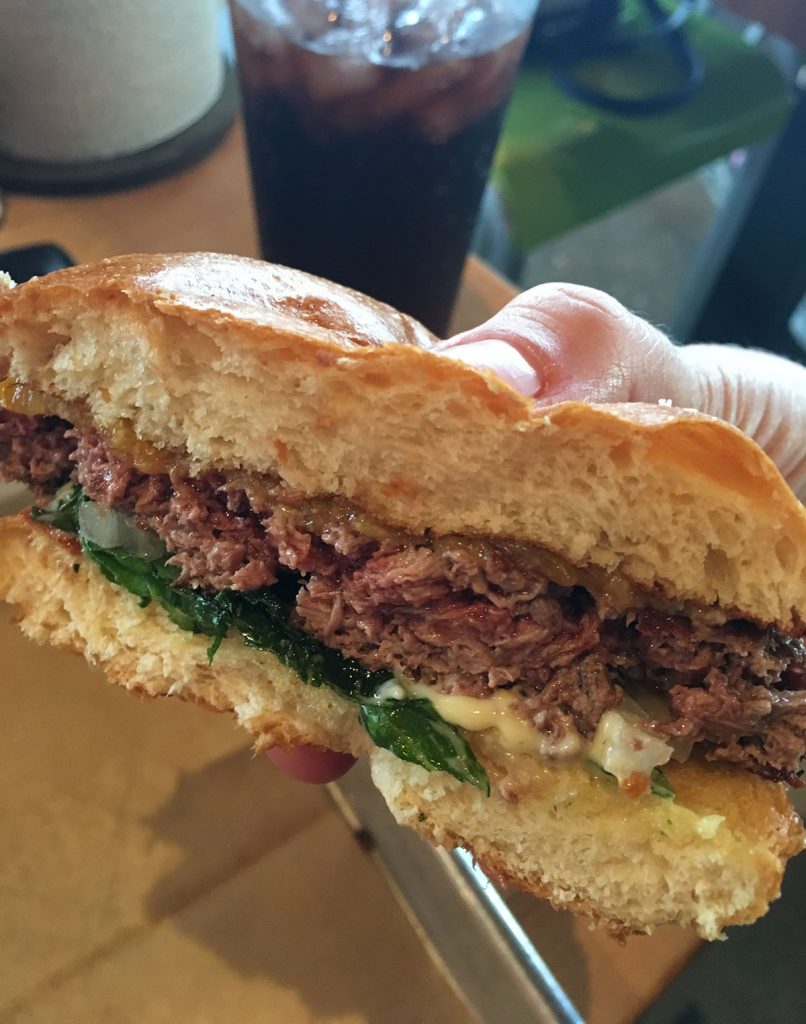 Therein lies the main selling point of the Impossible Burger. Because this burger “bleeds” like a rare-cooked meat burger (due to the high amounts of heme, an iron- and oxygen-rich molecule), we’re supposed to be fooled into believing it’s real beef.

And it really does comes close to that, because you don’t get any soy-like taste or spongy resistance here despite the patty leaning on soy for it build. Better yet, there’s no variance in texture like in veggie patties.

But, the thing is, neither the taste nor texture of the Impossible Burger are convincingly beefy. It’s still really good — don’t get me wrong — but, honestly, it comes closer to being a very rare-cooked turkey burger than it does a beef patty. (Pro tip: The burger’s even better when you dip it into some queso, which I learned after having ordered a side of fries and queso to go with the meal.)

It’s pretty clear that Impossible Foods sacrificed a lot of flavor potential in their attempt to make a meaty burger, but that’s not to say that this burger lacks in flavor. This is a very much a tasty burger, not to mention a viable culinary replacement for vegetarians or vegans — and one that has plenty of protein and iron, at that.

So: Did the Impossible Burger reinforce my love of burgers? No. But it did strengthen my dislike of hype. Why? Because this burger is clearly not for everybody on the socioeconomic scale. At $14, this burger isn’t exactly an easily affordable dining option for everyone, let alone anyone from a low-income household.

But, hey, I’m not trying to shit on anyone’s experience with this burger. It’s OK to miss cheeseburgers if you’re a vegan or vegetarian — and, though it’s an expensive means to justify that end, this burger definitely presents itself as an opportunity to be a delicious replacement for that part of your life.

As for me? In suppose I’ll just keep eating any burger life throws my way — not because I’m a stubborn meat eater but because I can. And because I love burgers, man.