Humor Us: Helen Hong Will Blow Your Shit Up. 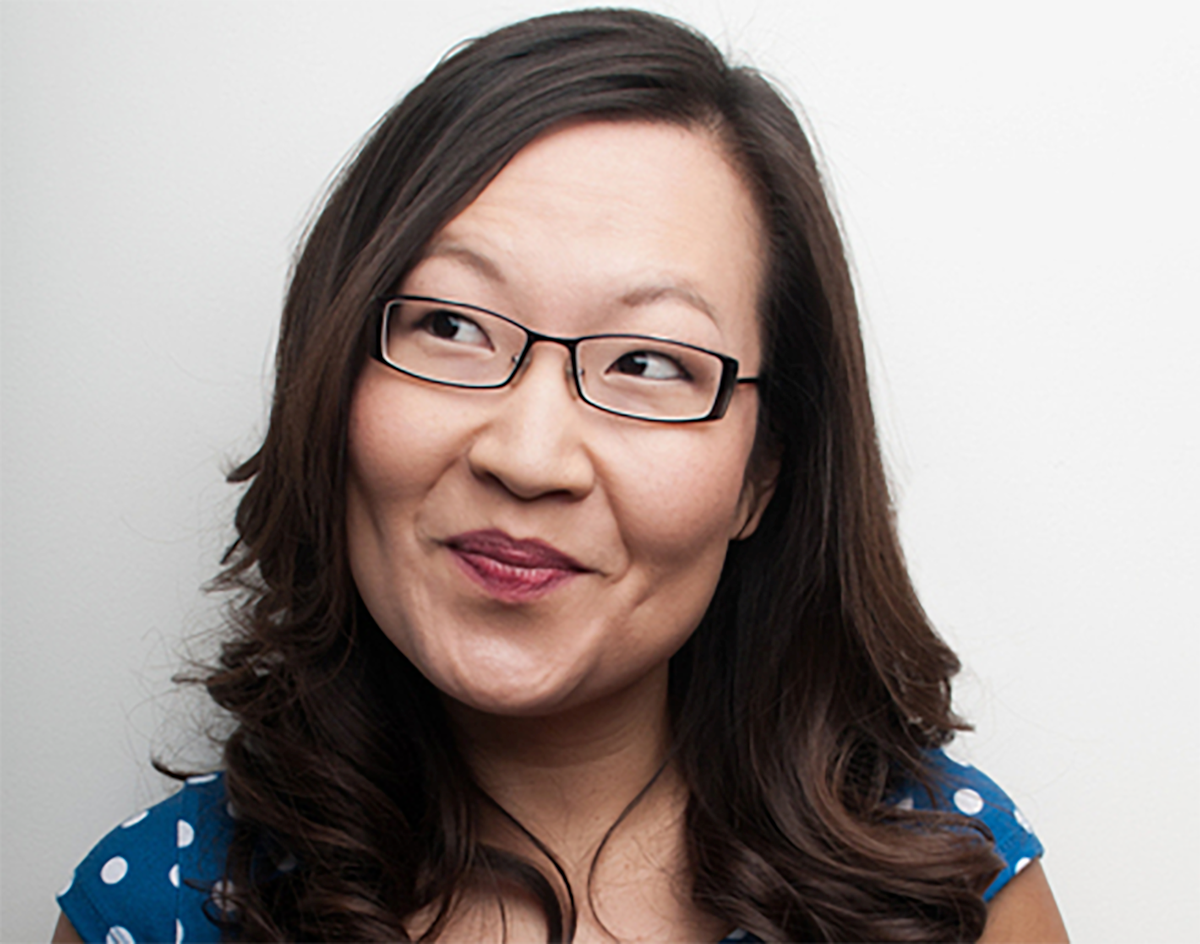 Before She Takes The Stage Of Hyena’s In Plano For Back-To-Back Sets This Week, Helen Hong Has Some Advice For Up-And-Coming Comics.

Helen Hong has been a comedian for two dog years — or fourteen human years. At least that is what she told me before my recording device went out mid-conversation for the second time.

Of course nothing can go right the first time I interview a big-name headliner. Luckily for me, I am a stand up comic (a little less than one dog year in, if you’re keeping count), and if things always went right, I wouldn’t be here. I would probably be where Hong is right now.

That being said, comparing myself to Hong would be a disservice to her. The daughter of two Korean immigrants, Helen went from a kid in New York City to one of the hardest working comedians in Hollywood today. From the many stages of Los Angeles’ comedy circuit — like “The Arsenio Hall Show” — to being one of the voices heard on NPR’s “Wait Wait… Don’t Tell Me,” Hong’s work ethic and contagious likability are just two of thousands of reasons why she has no problem booking a stage.

You can call Hong a lot of things — a comedian, an activist, an actress, a feminist, a podcaster — but I learned through the technical difficulties of this edition of “Humor Us,” the one thing you cannot call her, is impatient. Fortunately for me, the third time was the conversational charm.

Alright. Let’s try and pick up where we left off. As I was saying, you also use your comedy platform as an activist. Being a progressive, are you still in the Bernie Sanders camp for 2020?

Yes, I am. Although I might be the only one. [Laughs] In the last election, he was the only choice that we had if you were a progressive. Or even if you weren’t a progressive. I think there is too much being made up about him being a Socialist, or all of these stupid labels that freak people out. He’s talking about the things I think we should be talking about, which is jobs in America, healthcare for everybody, increasing the minimum wage and why the billionaires are getting richer while everybody else is getting screwed. That is the stuff that I really responded to. He is a visionary, and the reason we have options like Elizabeth Warren or Kamala Harris.

So you think things are different this time around because of him?

Despite your political stances, I have noticed, at least from what I’ve seen onstage, you pretty much stay away from politics in your act even though you’re passionate about it.

I’ve never been a political comic. I don’t enjoy political comedy too much and I think for it to be done well is really difficult and challenging — it’s just automatically going to be a little bit polarizing. So ironically, I don’t really talk about politics at all when I’m up there.

It’s interesting to see the different approaches comics take when talking politics on stage. So many people go about it in different ways. Personally, I stay away from it because I want everyone to be able to have fun. Sometimes you  just don’t want to bring that sort of energy into a room.

Absolutely. And because I am a nationally touring headliner [who also does] international shows, it’s just not appropriate. Even here in L.A., my home club is The Comedy and Magic Club. You know, Jay Leno’s club — it’s in a very Republican area [but] that’s my home club, so I’m not going to talk politics. That’s not my goal for comedy. I’m a professional comedian and it’s my job to make people laugh. People pay good money to come out and have a night out to enjoy themselves and I’m not going to use that to you know… piss people off. [laughs] I think there is a platform for all that elsewhere. I do my activism on my downtime — it’s my passion. It’s like a hobby for me. If I can use my comedy to support progressive causes, like if I get invited to a fundraiser or even to support a candidate, of course I will do that. But even then, my comedy is not political.

You don’t think sometimes that might shine through in your sets though? I mean even your joke with you being a feminist and finding the book “The Game” at some guy you were dating’s house. I feel like little things like that show a glimmer of your thoughts on social issues without splitting the room.

Yeah, and really that’s not me thumping a feminist message. That’s just me as a person telling my actual experience — that was a real experience I had in the dating world and I just thought it was funny. So inherently, I am going to be a feminist because I am a woman, and inherently I am not a racist, because I am a racial minority. Those are really just things that are me as a person with my perspective that come out in my sets.

Exactly. It’s my truth. My story. Everybody is going to talk about the stuff they know, and this is the stuff that I know.

You mentioned your home club is in L.A., so are you living out there for work? By choice? Maybe a little bit of both?

Absolutely by choice. I love it. I grew up in New York, but I really do love the lifestyle in L.A. I love the beach. I go to the beach every chance I get. Work wise, I make more money acting right now than I do [with] stand up, so yeah, this is where you have to be for that.

Speaking of that, I saw you’ve recently been filming for something?

I am! I’m very excited for that. (Hong couldn’t say too much about it — you know how it is.)

Is that why you were in France recently?

No, no. France was vacation!

So, you are going to be at Hyena’s Comedy Nightclub in Plano this week. Do you come out  to DFW to perform often?

Yeah, I was actually at the Hyena’s in Dallas not too long ago. I want to say maybe six months ago. It was great. I thought the Dallas crowds were really great — it was young and pretty diverse. There was one guy at one of the shows who was like, Mr. Texas. I was like “are you a real person or are you a caricature”. (Laughs) He looked like Yosemite Sam, had a giant ten-gallon hat, a Texas flag shirt and a Yosemite Sam handlebar mustache. I was like, “are you fucking kidding me right now. Am I being Punk’d right now? Did somebody send you here to fuck with me?” (Laughs) I did a little bit of crowd work with him and he was fantastic. He was there with his wife and they both just had a blast [and] I just couldn’t believe he actually exists. He looked like the mascot for Texas.

Plano should be fun. I’m stoked to get to work with you. I have to ask for the comics or comedy nerds reading: As a headliner who works with so many different types of comedians, what do you look for in an opener? Likes? Dislikes?

Really just to be funny. I once had an opener actually do anti-Asian jokes. (Laughs) I literally was like, “hey, in what universe did you think that would be a good idea? I am the one following you and you think you’re going to make anti-Asian jokes and I’m not going to freaking blow your shit up when I hit the stage?” You know what though? I think it was in Texas. It was! It was in San Antonio. At that big club that is in the mall — Rivercenter. It was a local guy, and I went on after him and crucified him. That’s the beauty of being a headliner, if you’re fucking up before me, I’m coming on after you and I’m gonna blow your shit up.

As an opener, you want to provide a wave for that headliner to ride. If you don’t, most headliners can still go up and do their thing, but it may come at your expense or confidence. The headline will always get the last word.

Absolutely. I think it’s really sweet when openers come up to me and ask if there is anything I don’t want them to do. Crowd work, this and that. But no, I am always like “you do you.” If I’m a headliner, no matter what you do, I will be able to follow you and make it funny. (Laughs) I was saying that for years, until I captured the guy doing anti-Asian jokes. I was like “ok, I’m still going to make it funny but you’re fucked.” You’re the one who is going to regret it. So yeah, that’s my only stipulation with openers — don’t make fun of Asian people and maybe don’t shit on women. And if you do, buckle the fuck up. (Laughs)

Man. I love the nightmare stories. We do stand up for the good nights, but I just think there is something inherently funnier about the bad ones. What was your biggest shit gig? The worst one?

You know, when you’re coming up, you play any chance you get. When I was coming up in New York, I used to do a like “black night.” Like a quote, unquote “urban night.” It was at this predominantly black comedy club in New York [with] a really large black and latino following, and my set was like super green. I just didn’t know how to handle myself [when] I went on. They didn’t even start to boo, they just started talking amongst themselves. (Laughs) And laughing amongst themselves about other stuff.

Ah, so it was one of those rooms where if you can just get them to look up and get their attention, it’s a victory. Forget a laugh at that point.

That’s exactly right. That was one of the hardest nights of stand up I had ever done. I was just an absolute disaster, because I just could not control the room and just could not get them back. I almost would’ve preferred if they had booed me rather than ignoring me completely. But, I will say, it was one of my proudest moments, because I went right the fuck back the next day — same club, next night, same type of audience [but] I didn’t back down. I didn’t let it beat me.

This interview has been edited and condensed for clarity.