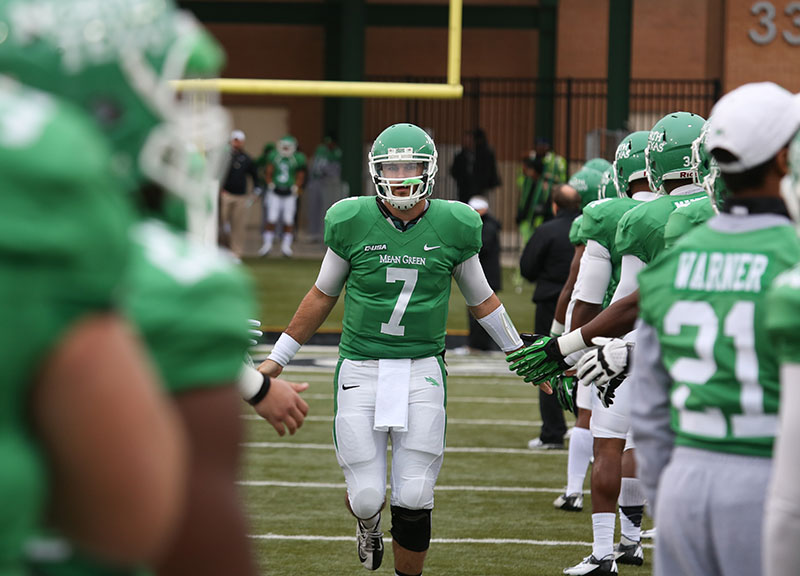 The final home game for the 2013 University of North Texas football team is going to sting for a long time.

Not only did North Texas' chances at beating conference opponent University of Texas at San Antonio seem within reach for all four quarters on Saturday, but the team's eventual loss in this Senior Day game cost the Mean Green an opportunity to finish its season undefeated at home.

Worse, it ruined the team's chances at winning the Conference USA-West division title.

From the get-go, North Texas struggled to get any productivity out of its offense, which has been led all season long by quarterback Derek Thompson, running back Brandin Byrd and wide receivers Brelan Chancellor and Darnell Smith — all seniors.

Credit the UTSA defense for that. The Roadrunners played a tough, physical game, especially in the defensive backfield. The UTSA secondary contested each and every catch attempt from North Texas' receiver corps — a group that seemed baffled by the lack of pass interference calls coming their way.

Bennett Okotcha and Triston Wade anchored the UTSA defense with Okotcha recording two pass break-ups and an interception and Wade leading the team with 11 tackles.

As much as the offense struggled throughout the game, though, the game never felt out of reach. North Texas' defensive played consistently, forcing UTSA into long third down situations all game long. But UTSA continuously came up big on those plays, successfully converting 14 of 20 third down attempts as compared to North Texas' paltry 6 of 15 conversion rate.

Still, somehow, North Texas still found itself within one score of tying the game in the fourth quarter.

With 1:12 left on the clock, North Texas, down 21-13, got the ball on its own 29 yard-line. Thompson then led the Mean Green down to the UTSA three-yard line after five quick completions. Finally, with one second left on the clock and a chance to tie the game with a touchdown and successful two-point conversion, Thompson dropped back and targeted his wide receiver, Smith, who led the team on this day with 13 catches for 115 yards.

As Thompson threw the ball to Smith, though, UTSA's Okotcha jumped the route, picked off the pass and began running toward his endzone. But, almost mercifully, rather than scoring on that play, Okotcha opted to end the game by running out of bounds instead.

This was the first meeting between North Texas and UTSA, but it played like an old rivalry. Both teams played physically, and players regularly jawed at each other after plays.

Clearly, UTSA knew it could come into Apogee Stadium and play spoiler for North Texas' to-this-point remarkable season, and its squad was relentless in making that happen.

Sure, this weekend's game may have been a loss for the North Texas. But the Mean Green may have gained a new rival in the process.

North Texas quarterback Derek Thompson (7) is met by teammates as the squad's senior players are honored on Senior Day at Apogee Stadium. Thompson was a three-year starter for North Texas.

North Texas wide receiver Brelan Chancellor (3) runs down the field after a pass thrown his way lands incomplete. Chancellor was targeted several times down the field, but finished the game with only two catches for 15 yards.

North Texas defensive back Marcus Trice (8) returns an interception for 14 yards in the first quarter. Trice leads the team with five interceptions on the season.

North Texas wide receiver Darnell Smith (80) has a pass to him broken up by UTSA defensive back Bennett Okotcha. Okotcha broke up two passes in the game and had one interception.

UTSA quarterback Eric Soza (8) runs into the endzone for his second rushing touchdown against North Texas.

UTSA defensive back Bennett Okotcha (21) breaks up his second pass of the game against North Texas wide receiver Carlos Harris (9).

UTSA defensive back Triston Wade (7) encourages his teammate as North Texas approaches the goal line during the final drive of the game. Wade led UTSA with 11 tackles.

North Texas tight end Drew Miller (86) dives into the endzone for North Texas' lone touchdown of the game against UTSA. 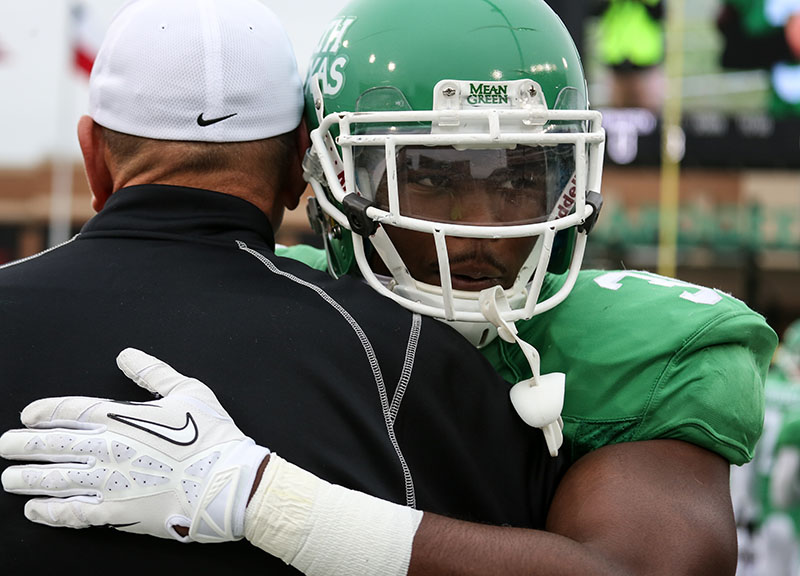 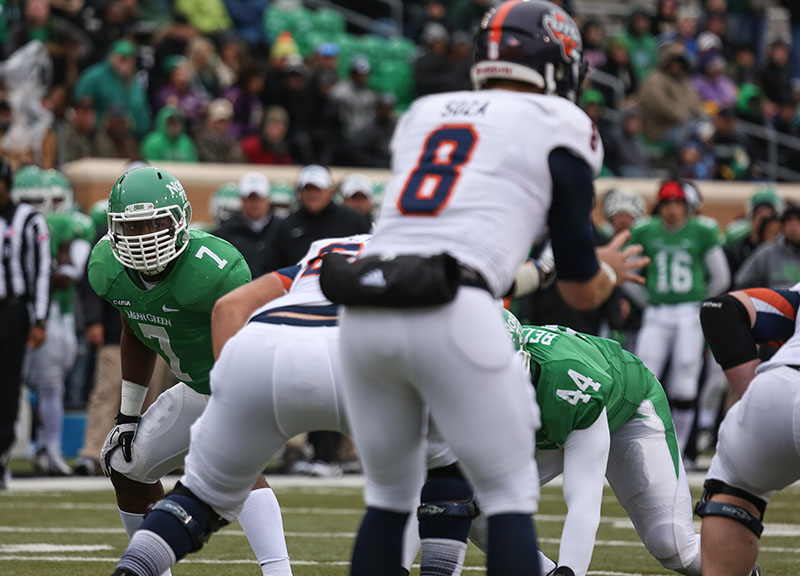 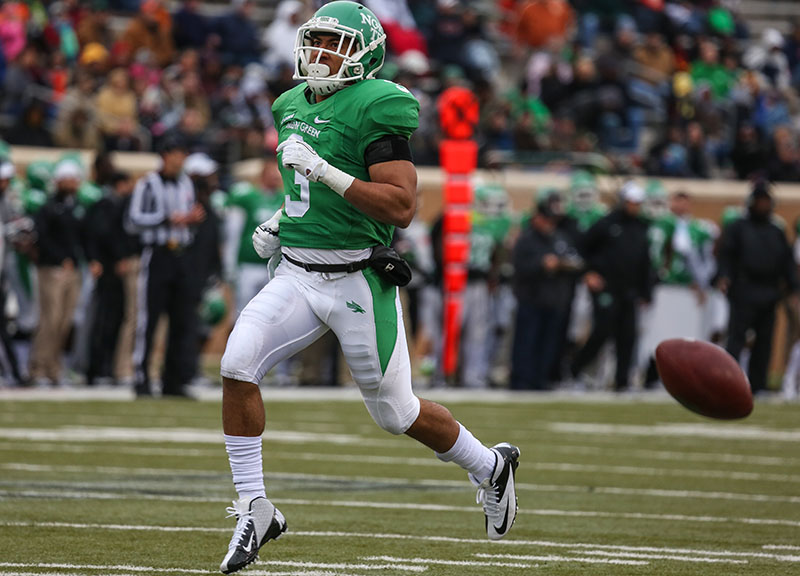 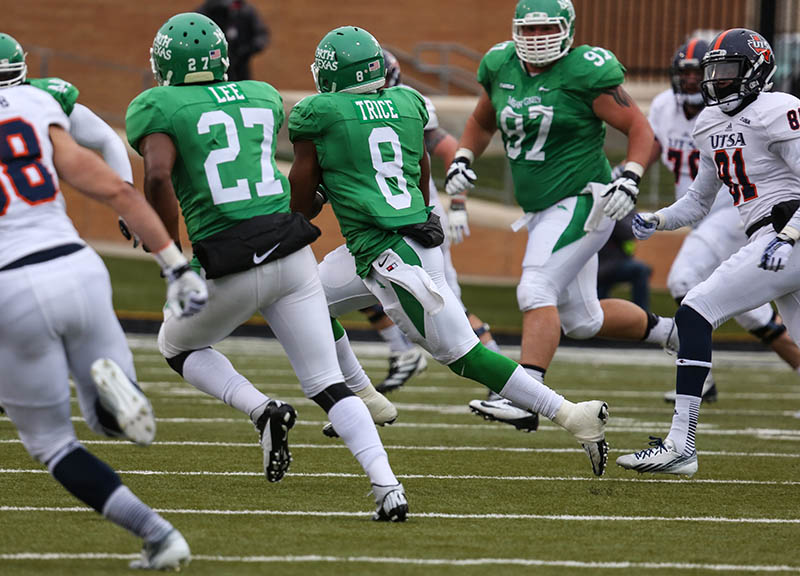 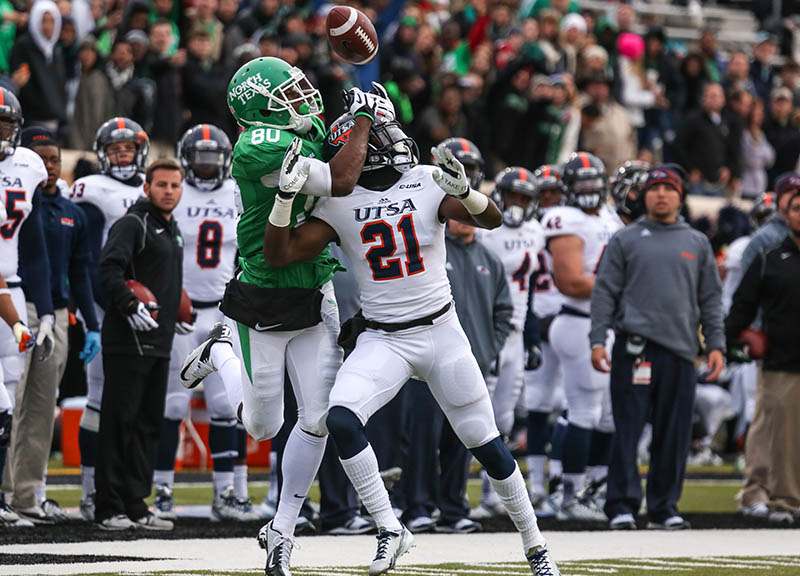 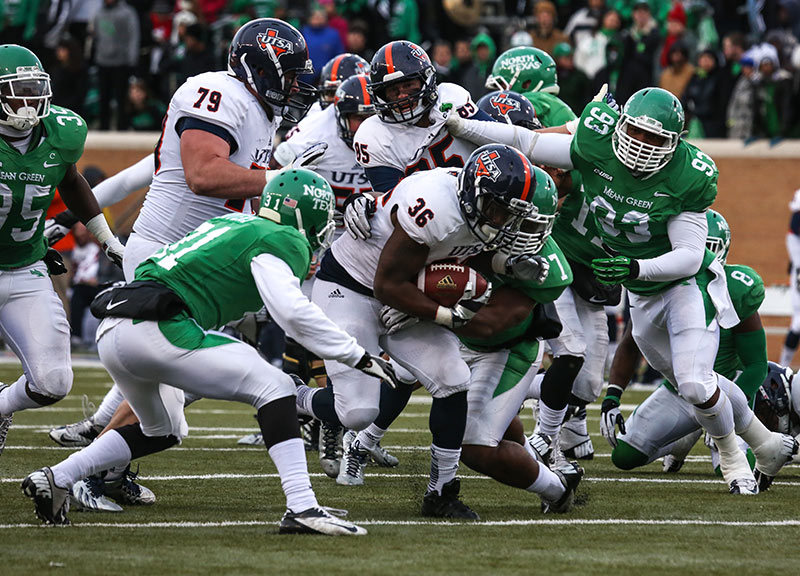 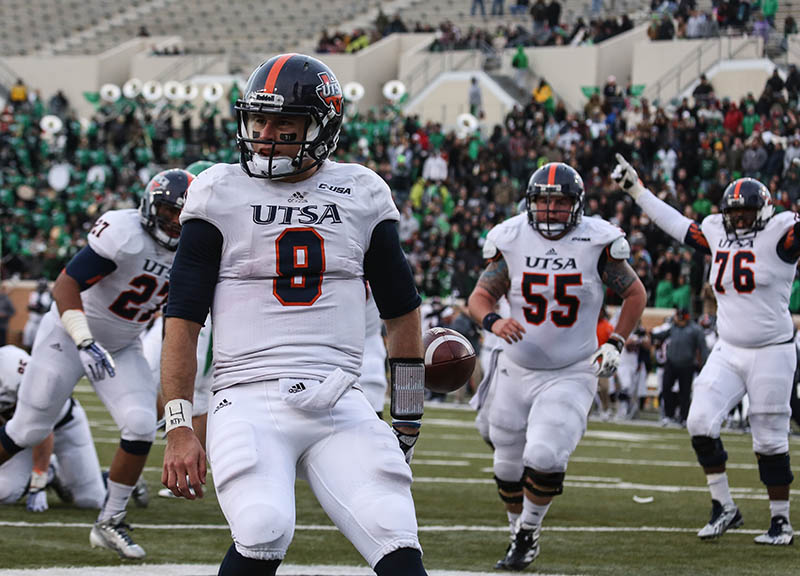 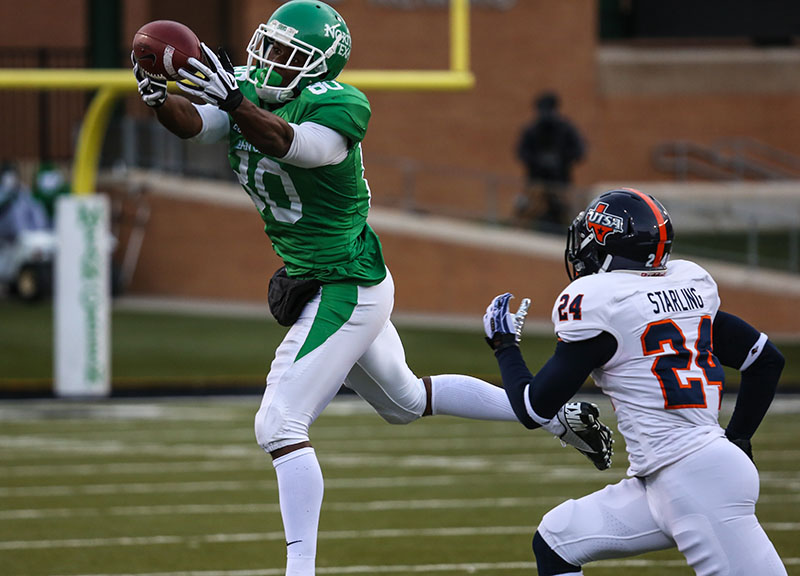 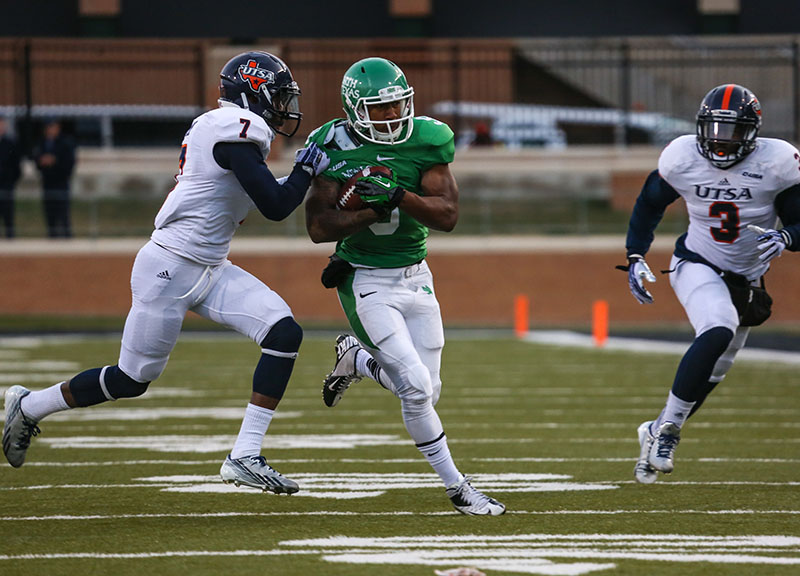 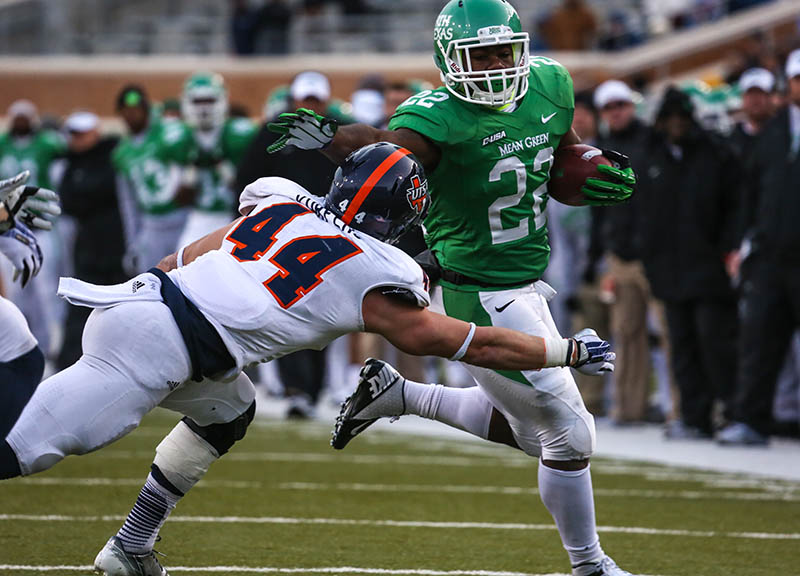 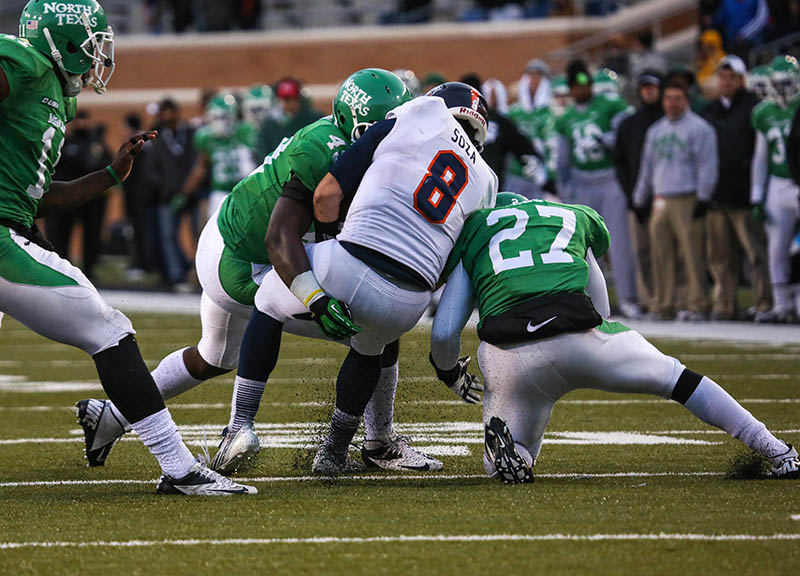 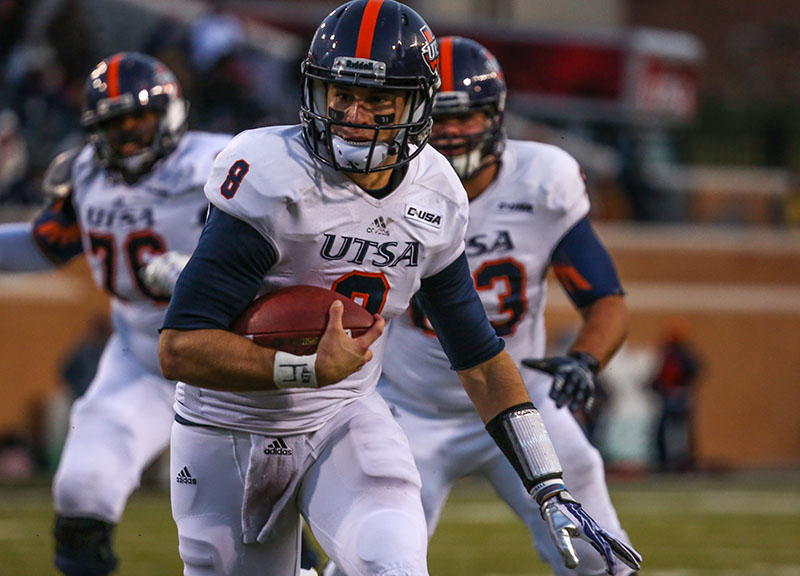 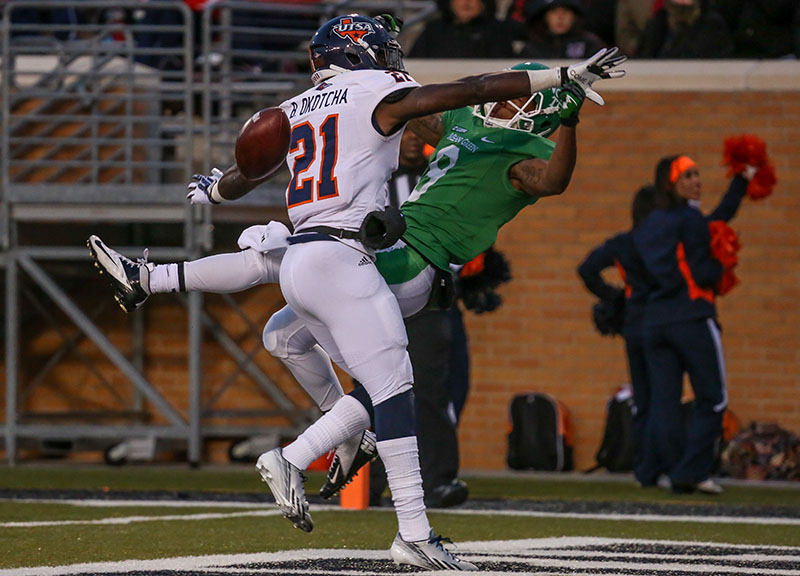 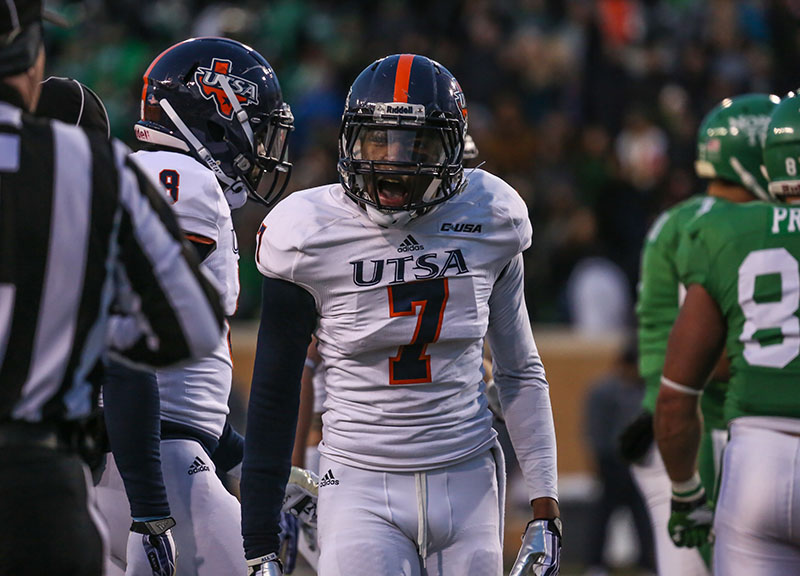 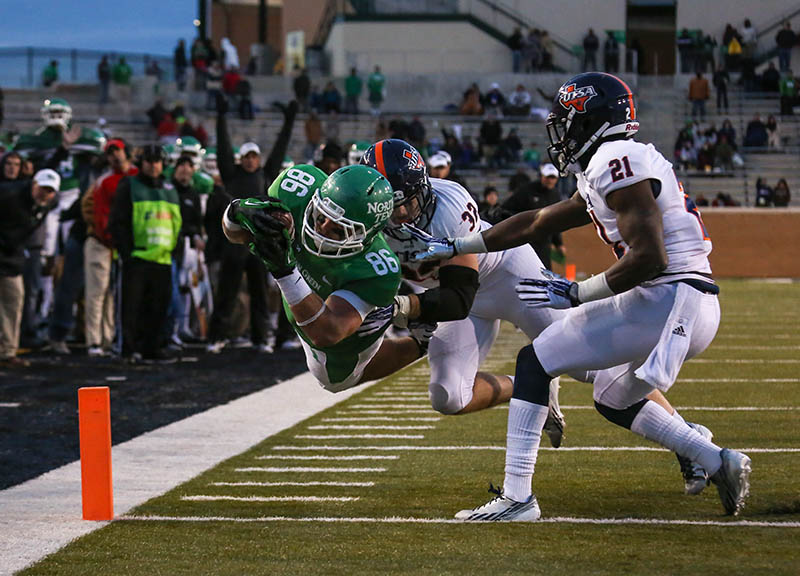 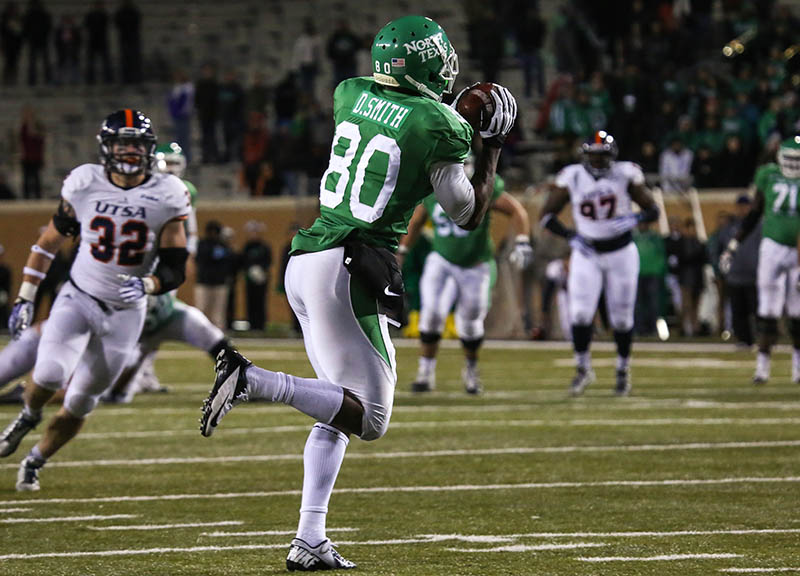 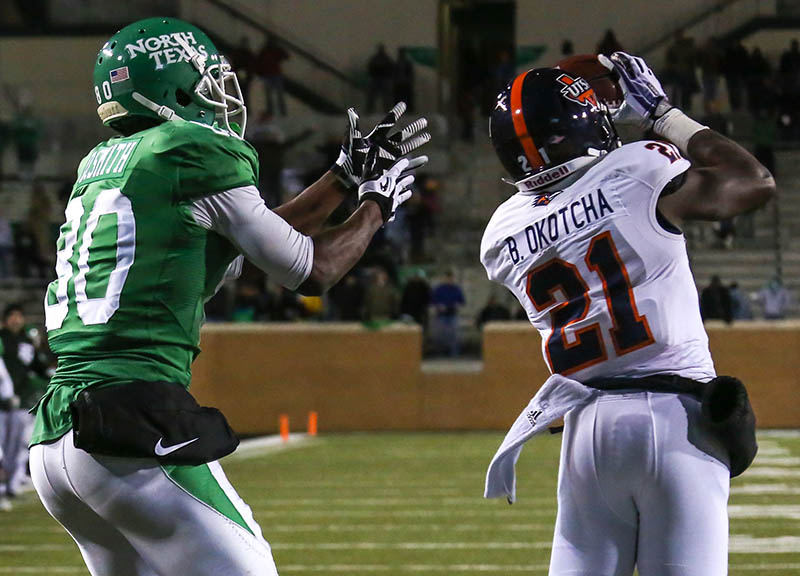 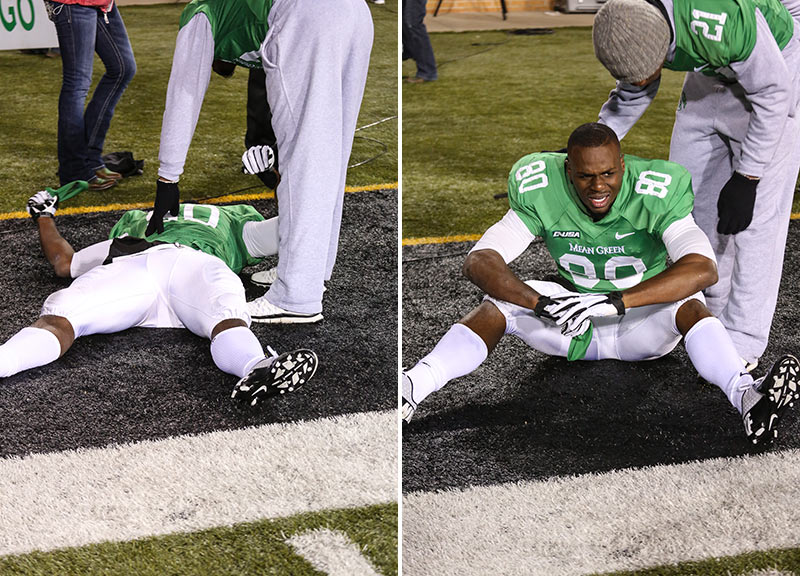