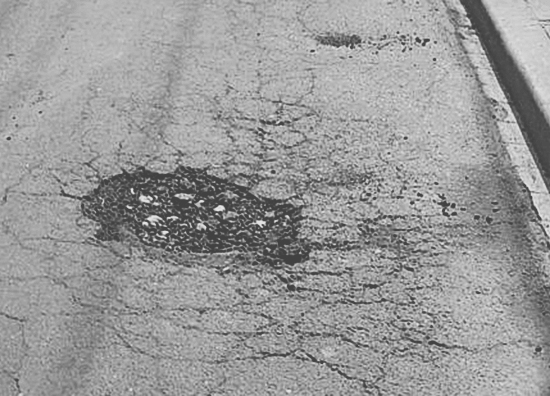 387 Pothole Damage Claims Were Filed With The City of Dallas In The Last Year. None Were Reimbursed.

There are a few things that are certain in Dallas: The NorthPark Center will always be packed; we will forever presume that the Arlington Cowboys are playoff-bound, even if reality guides us in the opposite direction; and there will be a countless amount of potholes wrecking havoc on drivers and their moving hunks of metal.

Last week, city councilman Philip T. Kingston took to Facebook to pen a lengthy post advocating for the City of Dallas to fix all that is “decaying” in the city — potholes, crappy streetlights, flooding issues — in the next bond election. The next bond election is two years away, Kingston notes, but these are pressing issues — and, for Kingston, personal ones. His post was spurred by the fact that he himself had hit a pothole with his car while driving along Matilda Street in the Lower Greenville area. The incident caused him to spill his coffee all over his car (boo-hoo) and speed through an intersection with a malfunctioning light (actually scary). Above all else, though, Kingston’s post was sensible. Here’s a big chunk that gets to the heart of his message:

The city of Dallas has approximately $1B in borrowing capacity to keep our debt service at a manageable level and, we hope, not further impair our bond rating.** The next bond package, if approved by voters, will be somewhere between $750mm and $900mm (total guess on my part, but this argument is going to hold up even if I’m off by 50%). The current streets needs inventory is $900mm.*** The current traffic signal needs inventory is over $300mm. Before I got fired as chair of the Arts, Culture & Libraries Committee****, I commissioned a study of the capital needs for Arts and culture facilities. It was $180mm not even including libraries.

You already see where I’m headed. This city must take care of the basics. Streets, signals, sidewalks, drainage, parks. The stuff we already own.

The thing about Kingston’s diatribe, though, is that it was pretty much immediately met with some subliminals from Mayor Mike Rawlings during his State of the City address.

“You will hear people say this is a rotting city,” Rawlings said in that speech. “These people want to pull in their horns and hunker down and fix the basics… [these people don’t] understand why people pick up and bring their families here.”

One of Rawlings’ main focuses as mayor is adding more and more admittedly cool amenities to Dallas — albeit ones that don’t exactly serve a real purpose for the city in any sense beyond pageantry. An all-too-obvious example: Rawlings is a huge fan of the proposed bullet train connecting Dallas to Houston. Never mind, of course, that North Texas has one of the most paltry public transportation systems out of every major American metropolis.

Still, Dallas is a drivin’-ass town, and all these potholes can’t be ignored. Of course, the city and Rawling are quick to say they aren’t ignoring the issue, claiming that Dallas actually does an OK job at patching up potholes, so long as they’re reported via 311. At the same time, though, Rawlings himself also describes the pothole issue as one that will take “decades” to solved through small, incremental steps. His stance? We all better suck it up and “strategize how we live in the new normal in the city.”

That’s easier said than done, and probably a sign of the mayor being more than just a little out of touch with his constituency. One needn’t search too far on any given day to hear a few Dallasites complaining about potholes. These complaints are serious: Pothole damage can be extremely costly to fix, despite rarely coming at the fault of the driver.

Elissa Genova, e-commerce manager at Hilton Worldwide, says she was subjected to two pothole adventures in two weeks — one that left her axle dented and cracked, and another that caused her alignment to fall out of sorts. These incidents, which both occurred in the Lake Highlands area and near Mockingbird Lane were out-of-pocket expenses she had to pay with her own wallet. Genova says she spent around $1,700 on damages caused by these potholes.

“I hope they get on it,” Genova says of the prolific pothole issue in Dallas. “I’m a single mom and that’s a big chunk of change.”

It’s also an amount that the city has no interest in paying itself. Our open records requests to Dallas City Hall show that 387 pothole claims have been filed with the city between November 1, 2014, and November 1, 2015. Not one of these claims have resulted in any reimbursements from the city.

But, hey, a decade or so from now, that won’t really be a problem. Right, Mayor Rawlings?