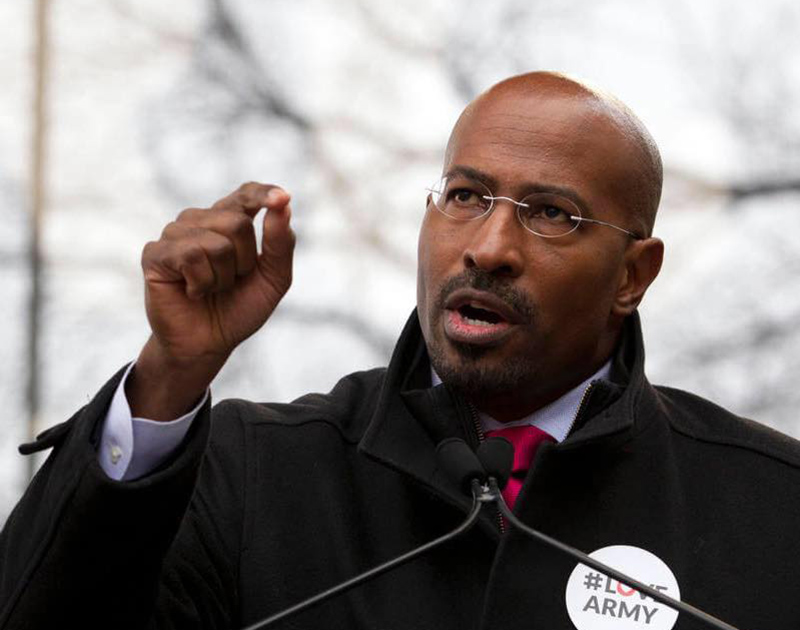 In the coming months, expect North Texas to be a hotbed for political theater as nationally renowned politicians and political commentators descend upon out region.

The trend officially kicked off this weekend as Van Jones, a CNN political commentator and former Obama Administration official, came through Dallas as his national “We Rise” tour stopped at the House of Blues.

Jones’ tour is just one of many ongoing ticketed political affairs set to take place across North Texas in the coming months as the notion of “politics-as-sport” begins to flex its muscle on area stages.

At Jones’ events, the famously even-keeled commentator aims to take the stage with community leaders, entertainers and athletes to discuss fighting racism, inequality and an array of social issues. It’s difficult to determine exactly what Jones or his audiences specifically hope to get out of these shows. Are they meant to change minds? Are they simple acts of preaching to a choir?

On Friday night at the House of Blues, Jones seemed to expect the former — only to be confronted by a crowded audience that desired the latter.

“[This is] red state territory and I’m proud to be here,” Jones said early on in his presentation, only to be confronted by an audience member who shouted out that Texas is maybe more purple than he realized.

“Hey,” Jones replied to that interruption, “I love purple.”

Soon after, he welcomed his big local guest for the night, billionaire Dallas Mavericks owner Mark Cuban, who has publicly feuded with President Donald Trump for years. On this night, he seized the opportunity presented him by Jones to criticize the president, and continued toying with the idea of eventually running for president himself.

“Is it a good day to sit in Washington, D.C., and deal with politicians?” Cuban said. “Hell no. But I’m an American first — and if it gets to that, I’d consider it.”

The Dallas crowd applauded that reveal, naturally. It’s doubtful that other upcoming area political figure appearances will be welcomed so warmly.

On September 27, President Donald Trump will come to town for a speaking engagement. Ticket prices will run $2,700 to $100,000 per couple, with proceeds going to renew Trump’s funds for his 2020 reelection campaign and to bolster the Republican National Committee’s reserves for what could be an all-out slog in the 2018 fight for control of the House and Senate. This will mark Trump’s first visit to Texas as president, with his previous visits coming in 2016 back when he was just Candidate Trump.

Things got pretty heated at those affairs, as the below video shows.

And, already, things are heating up in advance of Trump’s arrival. In a statement on the Texas Democrats website following the announcement of Trump’s Dallas fundraiser, Democrats quickly took to describing the Trump campaign as a “white supremacist-endorsed campaign,” with Texas Democratic Party Chair Gilberto Hinojosa even going so far as to jokingly rib Greg Abbott, Dan Patrick and Ted Cruz for already lining up to get their photos taking alongside the president.

Of course, Trump isn’t the only notable Republican headed this way soon. His oldest son will stop by the area on October 24 to kick off the University of North Texas’ Kuehne Speaker series. When that appearance was first announced, Don. Jr. was scheduled to appear at AT&T Stadium. Since then, that venue has been removed from the speaker series website. But while its exact location is TBD, the appearance is still scheduled to go on. When it happens, it will be the latest in a series that has historically boasted a decidedly conservative bent; past guests include Rudy Giuliani, as well as FOX News personalities Andrea Tantaros and Charles Gasparino. Melissa Francis, an anchor and host for the FOX Business Network, will join Don Jr. at this visit, with sponsorships for the event running from $5,000 to $50,000 and, if past history holds, no individual tickets being sold.

The left, on the other hand, will have its day when both Hillary and Bill Clinton appear on November 17 at the Irving Music Factory, with individual tickets running a a high, but substantially more affordable, $99.50 to $1,250. Presumably without campaign coffers to stock up, this event will be used at least in part to promote Hillary Clinton’s upcoming book, What Happened. Admission earns attendees not just a seat, but also the opportunity to fling a question or two at the Clintons during a Q&A session. Possible questions to be asked at that event are not limited to but surely include: “No, really, what happened?”