Has SMU Football Finally Figured Out How To Brand Itself? 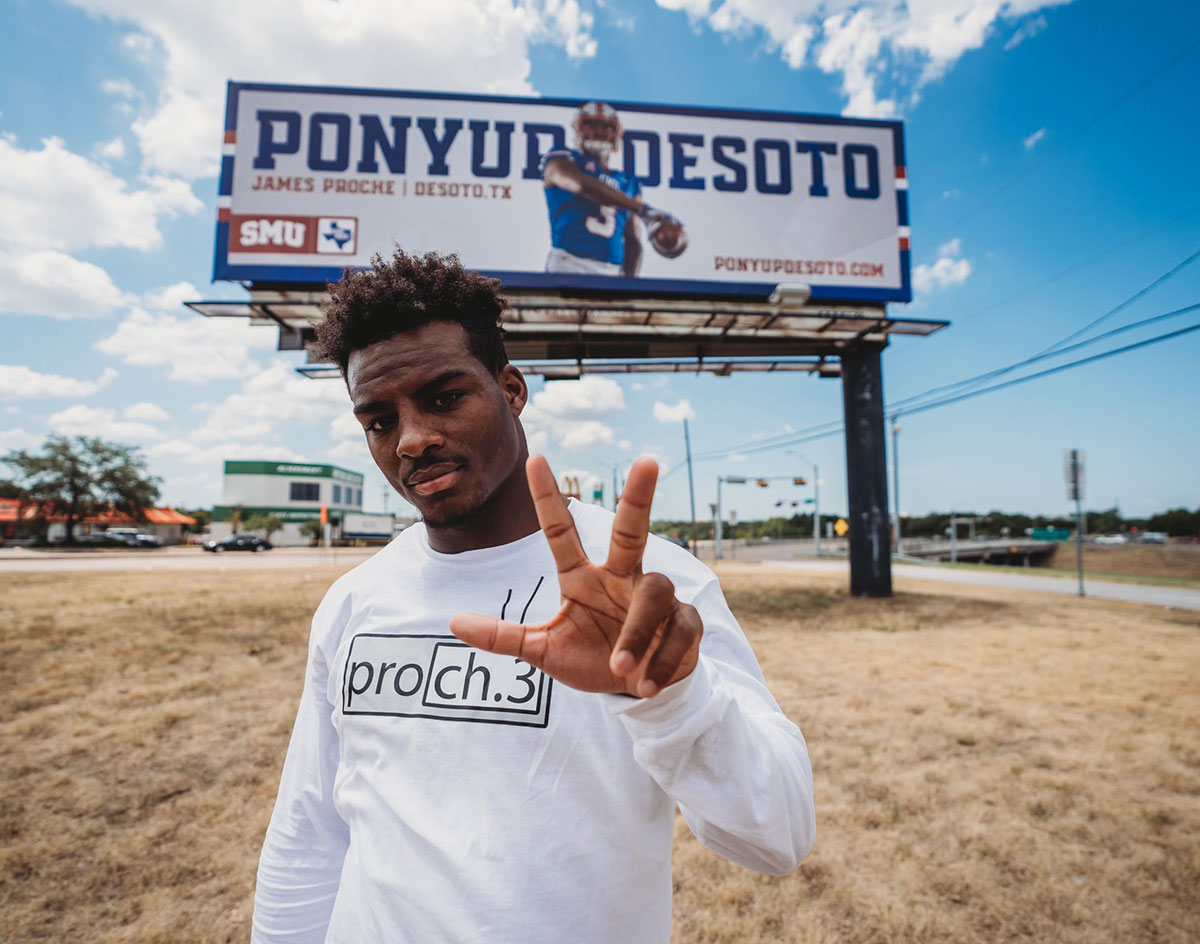 The SMU Football Team’s New Ad Campaign Is Built Around The Idea Of Dallas Pride. Could These Billboards Finally Bring The Program Back From The Dead?

At the time that they were handed down, no one really knew how much the 1987 sanctions levied by the NCAA against Southern Methodist University would affect its football program. But there was still a safe assumption that — even with the school being forced to cancel its 1987 and 1988 seasons, and essentially restart its efforts from scratch in 1989 — that the effects wouldn’t still be lingering over a program a full 30 years later.

How wrong we all were. Like an atomic bomb, the implementation of the “Death Penalty” (a rarely used, strikingly severe punishment handed down to college teams for repeated recruiting violations) truly devastated the collegiate program. It turned the once-respected college football team into a joke thanks to season after season of incredibly poor on-field showings. As the school’s many former conference rivals from the now-defunct Southwest Conference went on to enjoy various successes over these last three decades — including multiple bowl appearances, numerous Heisman trophy winners and even a few National Championships — SMU has amassed just five winning seasons.

But while recruiting tactics ultimately became the downfall of the SMU football program back in the day, it seems inventive and outside-the-box recruiting ideas may also be the very thing that could return the school to prominence in the future.

Over the years, SMU has been average (at best) at convincing Dallas-area high school recruits to stay in town and suit up at The Hilltop. In all fairness, the idea of playing for a fledgling football team just five miles from home pales in comparison to leaving town and shining on national TV for an SEC powerhouse. But current SMU head coach Sonny Dykes and the marketing team at the school have recently launched a new branding campaign that they believes they can turn their in-town recruiting luck around, and convince a few more Dallas-Fort Worth high school hopefuls to sign on to play for the Mustangs.

SEE ALSO: HOW TO BOULEVARD LIKE A PRO. // Everything You Need To Know About The SMU Football Tailgating Scene.

Earlier this month, the program launched a new “Born & RaiseDDD” billboard ad campaign. If you’ve recently been caught in one of Dallas’ world-famous traffic jams, there’s a chance you might’ve already taken notice of the it. It doesn’t really matter where your commute takes you; the billboards have been posted along highway stretches in Highland Park, Arlington, Mesquite, Cedar Hill, DeSoto, Pleasant Grove and Oak Cliff, the last two of which should play a major role in bringing more inner-city recruits that often go overlooked to SMU. Each of these looming advertisements features an action shot of an SMU football player or a coach who grew up in the region, while also listing their name, the area in which they were “born and raiseDDD” (the “DDD,” also known as the “Triple D” is a play on the popular City Of Dallas logo,) and the long-standing SMU mantra of “Pony Up.”

Put on for our city. #PonyUpDallas

What makes the idea incredibly refreshing is its billboard placement in the specific city each player represents. It allows every one of these players or coaches to become shining examples of excellence in their respective neighborhoods, and acts as a beacon of sorts for the university, helping it establish itself as Dallas’ college football team of choice.

Importantly, the campaign is an inspirational one for prospective student-athletes in the greater Dallas region. Young athletes look for opportunities to make an impact on the field, sure. But they also long to make an impact, and to be recognized, in their own communities. When budding area high school football superstars glance at billboards featuring defensive tackle Demerick Gary (of Oak Cliff’s Kimball High) or assistant coach Ra’shaad Samples (of Pleasant Grove’s Skyline High), they can start imagining their own likeness overlooking the town. It’s not a stretch by any means to think this could influence a potential recruits’ decision come National Signing Day.

When asked about the ads, Dykes recently told the Dallas Morning News that his team has “got to do a good job of branding ourselves as Dallas’ football program,” noting that his staff has to be competitive in the recruiting game if it wants to be competitive on the field. The “Born & RaiseDDD” campaign is clear step in the direction toward establishing SMU as a preferred destination among local high school athletes. Added Dykes about the message the billboards represent: “That’s just what we need to be: All of Dallas’ program.”

In many ways, this innovative approach to hometown recruiting resembles the bold strategy that the University of Miami set forth in the late ’80s when it committed to signing athletes from its own backyard, and especially within inner-city Miami. If SMU wishes to return to its own dominance of the 1980s and become the flagship school of Dallas once again, thoughtfully targeting players from this area is a great start.

“I felt like we needed to make inroads on Dallas recruiting,” Dykes also said. “We have some of the best high school football programs in the country within 10 miles of our campus, and we’ve got to have a presence recruiting there at those schools. We have to be the sexy school in Dallas at some point if we’re going to get things the way we want to get it.”

That term — sexy — can also apply to the ways in which this campaign is featured in the uniforms the team is wearing on the field in 2019. Featuring a script “Dallas” on the jerseys and the team’s traditional logo within a Triple D overlay, these uniforms are an extension of the same concept.

Coach Dykes and SMU’s staff seem to have the right idea to revive SMU’s football team. An acute focus on making SMU the “sexy” school choice for area recruits — as opposed to its usual space as the last option — naturally boosts its chances of landing top talent from the region.

SMU has long been a dead and mostly forgotten program. But these billboard ads could be the miracle touch that ultimately brings SMU back to life, and returns The Hilltop back to its rightful place at the top.

This story has been updated to reflect how the new marketing campaign also crosses over to the team’s uniforms. Cover image via SMU Football’s Twitter.