Anyone who grew up in any kind of alternative (read: punk, goth, metal) scene knows that, in addition to a lot of talk about “authenticity” and being “real,” these worlds are also filled with a lot of BS posturing done in order for people to fit in. It’s pretty brutal: Everyone assumes that you can’t be yourself around a certain group for fear of rejection; in turn, they themselves change and, in a sense, no one ever really shows their true colors.

Continuing 2016’s great run of nail-biting thrillers started by such entertaining films as The Invitation and The Witch, Green Room, instead of centering around an ominous dinner party or a 1660s witch hunt, focuses on a backstage standoff between a small-time punk band and some ruthless skinheads.

It’s a simple premise: Up-and-coming act The Ain’t Rights decides to take a gig at white power show for some easy money and the snide opportunity to share its liberal lyrics with the audience. That tense set, however, is only the start. Shortly after the show ends, the band accidentally witnesses a murder and is held hostage in the titular room for doing so.

The band’s main adversary here comes in the form of Sir Patrick Stewart’s Darcy. As the leader of the group running the venue, his calm demeanor is all too chilling — especially once you realize what he wants to do with the band to keep them from talking.

Director Saulnier has been a hot commodity since coming out with his “everyman revenge thriller” Blue Ruin, and the expectations were high for this movie. Saulnier delivers. As was true of Blue Ruin, Green Room plays on genre tropes in explosive ways. Let’s put it this way: No one is safe in this movie, and the story goes in places that you don’t expect.

And, no, this isn’t just a gimmick to keep people in their seats.

When Anton Yelchin’s Pat is injured during the initial attack of the room, his reaction to it gives us so much insight into his character. As the movie progresses, we get to learn a lot about the characters from the way they deal with the surrounding violence. A now semi-viral scene is going around where one of the band members, Reece (Joe Cole), who just gave an interview about wanting being a badass, confesses that his dessert island playlist would include Prince. These touches serve to make the violence inflicted upon the band all the more harrowing, and Saulnier makes it feel more visceral thanks to his use of a classy mixture of CGI and practical effects, as well as claustrophobic camera that brings the tension and brutality to its max. His pacing, meanwhile, never slows, only ramping up as more and more skinheads surround the venue.

Speaking of the skinheads: Sir Patrick Stewart’s role in this movie is guaranteed to be talked about for years to come. Given his usually benevolent and paternal roles, his inversion of that as a skinhead leader is jarring, to say the lease. He’s still calm, still confident and still doesn’t need to raise his voice to command a room, but in this context, these qualities are more terrifying than any slasher film villain in recent memory.

But there are levels at play here, too. Nothing is straight black and white. Darcy’s subordinate Gabe, played by Saulnier’s BFF Macon Blair, also explores the films themes of identity and groupthink. Just as The Ain’t Rights have created this tough image that betrays their actual selves, the same goes for Gabe. Meanwhile, Imogen Poots’s Amber, a show straggler who somehow finds herself caught up in this mess too, is a breath of fresh air that too isn’t what she initially appears to be; a damsel in distress, she ain’t.

There’s a lot to like about this film, which appears to just be the latest in Saulnier’s even-more-certain rise. The cinematography is effective, the writing is sharp and the depth of subculture knowledge flashed is impressive. The acting is great, the cast outstanding.
Thanks to the craft and technique with which it shares this simple but effective story, the movie practically begs for repeated viewings — an encore, perhaps?

Trust us: Green Room will melt your face. 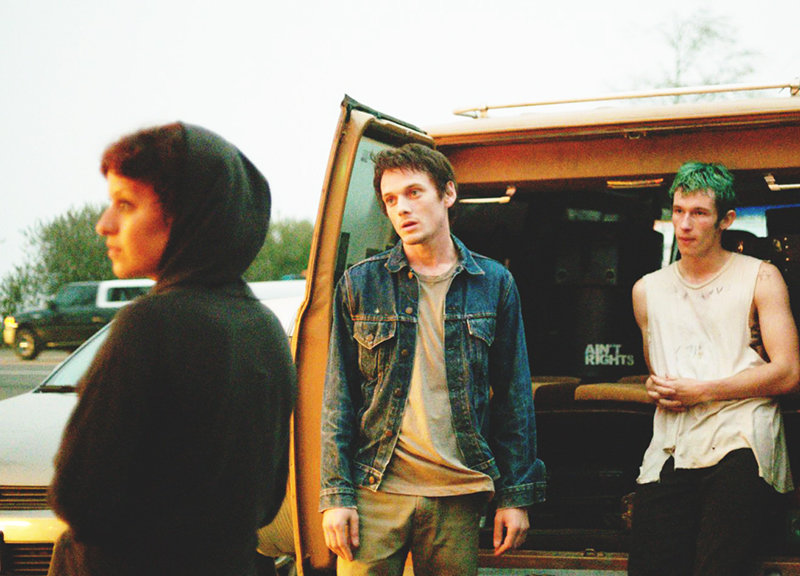