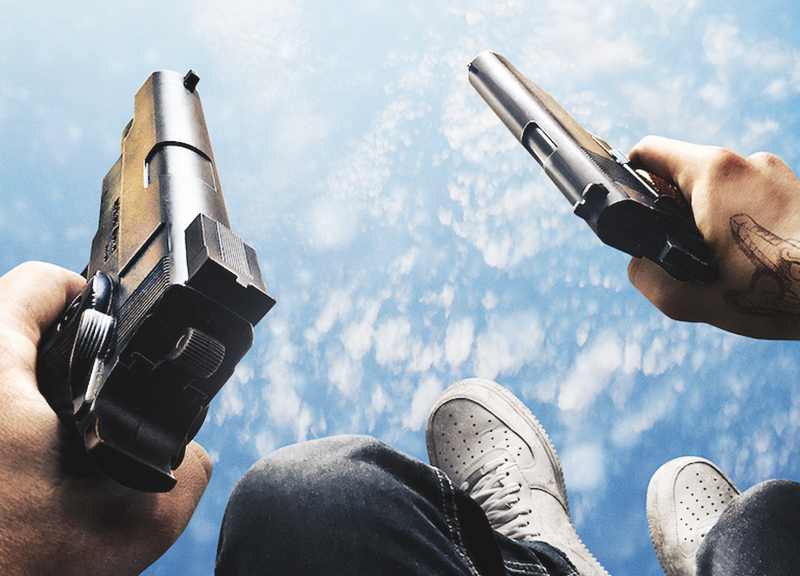 If you’re the type of person who plays first-person shooter video games and thinks, “Man, I would really love to immerse myself in this on a bigger screen!” then, boy oh boy, have your dreams come true with Hardcore Henry, an in-your-face, bloody, somewhat headache-inducing but super fun film.

This film, uniquely told through the eyes of our protagonist Henry, opens with our hero waking up in a lab, not remembering how he got there or, well, anything at all. Somehow, he’s lost part of his arm and leg, and has been given new robotic limbs from his scientist wife, Estelle (Haley Bennett). Within minutes, an evil scientist, Akan (Danila Kozlovsky), comes in, looking to cause trouble and steal the technology behind Henry’s new parts, I guess? It’s unclear at first what his intentions are. But such is the point of the film: We’re seeing everything completely from Henry’s perspective and we’re supposed be confused.

The action is pretty much non-stop from the first five minutes on. Since this film was shot completely on a Go-Pro camera, seeing all the action from a first-person perspective is indeed a little dizzying, and people with bad motion sickness better stay away. But, overall, this experiment results in a neat perspective we’ve never really seen in action films before. We’re focused on our main character firing gun at some thug from the front — then, all of a sudden, he’s hit by a car or punched from off-camera.

No, this movie isn’t afraid to put you right in the middle of the action. In fact, doing so is essentially the whole idea. With this perspective, some of the action sequences can lose a little bit of their tension, though; the audience is forced to take so much time trying to figure out what’s going on during these fight scenes that it’s easier to check out for a bit than to try quickly shifting their focus. Still, there are some fresh ideas shared in these scenes, as well as a couple of fantastic moments, including a legitimately great foot chase sequence.

The real scene-stealer here is Sharlto Copley, who plays Henry’s ally, Jimmy. Copley has proven himself to be a capable actor in the past, but this film shows his versatility. I don’t want to say much more, but there are some points in the film where he’s complete unrecognizable.

Director Ilya Naishuller has done the almost impossible here: He’s created a fresh entry in the action film genre. Though it would be easy to write off this movie as just a string of action set-pieces, there’s enough mystery surrounding Henry, Jimmy, and Akan to keep the audience engaged and guessing. Is it the most profound and/or groundbreaking story ever put on screen? Hardly. But it’s probably better than it has any right to be given its gimmicky premise.

Overall, this film is a must-see for any fan of the action genre. Just be sure to take your headache medicine or Dramamine in advance.