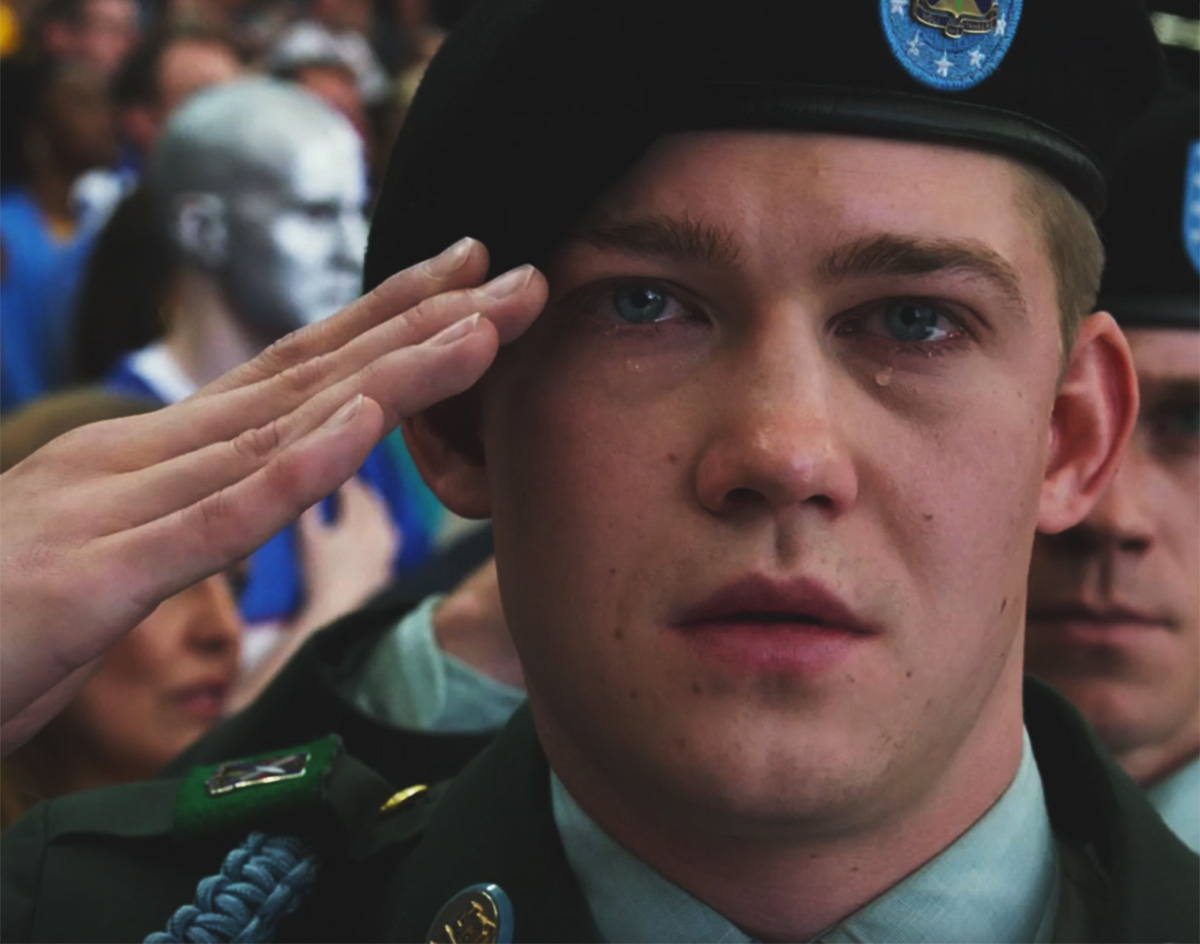 Billy Lynn’s Long Halftime Walk May Be A Great Book, But Its Nuance Is Wholly Lost In Ang Lee’s Big Screen Adaptation.

There’s a moment in Billy Lynn’s Long Halftime Walk when the titular character (Joe Alwyn) and the object of his affection — not his sister (Kristen Stewart, and more on that later), but rather a Dallas Cowboys cheerleader he’d just met named Faison (Makenzie Leigh) — are walking along the field at Texas Stadium (RIP) in Irving, having a very sincere chat.

It’s game day during an early ’00s Thanksgiving Day Dallas Cowboys game. Here, Texas native Billy and his fellow soldiers of Bravo Squad are being honored for a subjectively successful skirmish in Iraq that was somehow caught on camera and shown on cable news. It’s the final stop on the soldiers’ two-week reprieve from the war, and, in many ways, it represents a different but still troubling fight: Unprepared, Billy and his war pals are forced to endure press conferences, a halftime show from Destiny’s Child, vaguely evil billionaires, a slew of American Idiots whose words aren’t especially helpful, and an inexplicably vengeful group of security guards. But, hey, there’s also the scantily clad Faison, who neither Billy nor his fellow Army men can believe is as romantically interested in him as she appears to be.

And so here Billy is in this scene, walking alongside the pop culture ideal of a what society says a woman should be, hanging on her every dumb word — mostly because Billy, an aw-shucks virgin and not too stoked about it, doesn’t know what else to do. He smiles along and listens intently as Faison, eyes apparently now open thanks her sudden familiarity with Billy, tells the camouflage-clad solider with all the seriousness in the world that, until she met him… well, I’m not exactly sure what she said had since changed. Everything, maybe? I was too busy eye-rolling at the notion that her politics been altered by sharing a few words and tongue-swaps with Billy for a few minutes behind a press room curtain earlier in the day to hear her statement in full. But I think she said something about how her perspective was somehow greater at this point than it had been all those handful of scenes ago. That would fit the arc of her character.

Honestly, what she said isn’t ultimately all that important. It is an unintentionally hilarious moment regardless, specifically because it does not appear to so readily be going for laughs as some of the film’s other scenes featuring Americans mistaking sympathy for empathy more clearly do.

It’s a shame, really: This adaptation of Billy Lynn’s Long Halftime Walk from the sometimes great Ang Lee (Life Of Pi, Brokeback Mountain) has every opportunity to harangue America’s feigned efforts at supporting our troops — a subject ripe for the ripping, no doubt — but it’s so monotone in its overall presentation and so emptily earnest in its more emotional moments that its nuanced efforts at satire and commentary just flat-line.

In book form, nuance like this has time to fester. In a film that barely approaches the two-hour mark and has so much to say, it’s just glossed over in an attempt to push along a plot that lacks any real undulation or climax.

Yes, it’s at least a little ironic that that a film ostensibly about the effects of war forgets the old rule that winning a battle becomes almost impossible when one side is simultaneously fighting on multiple fronts. Alas, there’s just too much going on in this film for any of it to bear any real weight.

It’s too bad, but Billy Lynn’s Long Halftime Walk never had much chance to succeed in any sort of true-to-book film adaptation. As a story, it just touches on too many things — war, PTSD, American obliviousness to global ills, the loss of innocence, virginal perspectives, greed, selfishness, mistaken heroism and an obsession with spectacle — to bring much heft to any of those subjects in a condensed format.

There is, I suppose, a case to be made that, by bombarding and ultimately dulling the audience’s senses to these themes, the film is placing the audience in the shoes of Billy and his fellow soldiers in Bravo Squad, who’ve become used to feeling overwhelmed by the circumstances surrounding them. That appears to have been the film’s intent, anyway: Repeatedly throughout the film, various people Billy comes into contact with speak to him by looking directly into the camera. But this effort at humanizing these perspectives utterly fails; perhaps it succeeds in the 120 frames-per-second, 4K, 3D format in which Lee shot it, but in the standard format in which it will be mostly shown, it doesn’t, not even in the slightest. It’s just corny.

The film does have some strong points. Kristen Stewart is compelling (if underused) as Billy’s guilt-ridden sister, who he may or may not be sexually attracted to; she’s both the reason Billy signed up for service in the first place, and why he’s unsure if he wants to return to war. Vin Diesel, who is becoming increasingly valuable in small roles (see: Guardians of the Galaxy), is too rather likable (if also underused) as Billy’s late, shamanistic army mentor. Garrett Hedlund also does commendably, bringing some gravitas to his role as Billy’s immediate superior and biggest champion.

But most everyone else is awkwardly cast against type — as laughable a character as Jerry Jones may be in real life, Steve Martin’s portrayal of fake Cowboys owner Norm Oglesby just never really hits, and Chris Tucker’s hyper-kinetic talents are wholly lost as the agent trying to sell the movie rights to the Bravo Squad story — and lost in the greater shuffle. Even NFL stars Richard Sherman and J.J. Watt look lost in their attempts to essentially play themselves.

Especially around these parts, there appeared to be so many reasons to be excited about this film’s release. By penning the novel upon which this film is based, Dallas’ own Ben Fountain has become a bona fide literary star. Who wouldn’t root for him to see continued (if unlikely) success out of the decidedly non-hot bed of literature that is North Texas? And then there is, of course, the story’s setting, which is due for some satire indeed, especially as the Cowboys are concerned.

If there’s a saving grace here, it’s that, unlike 2014’s American Sniper, Billy Lynn’s Long Halftime Walk isn’t an area-tied military film that outright glorifies war. But that’s about all that can be said about it.

The acting is mostly subpar, the story is mostly lacking, the message is moslty muddled and its overall presentation is mostly awkward.