Going For The Gold. 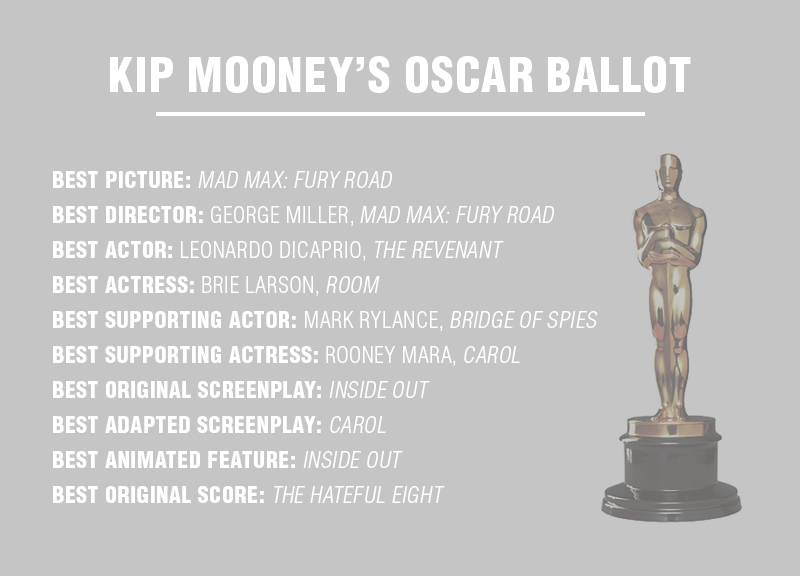 Our Film Critics Talk Predictions, Hopes and Fears For The 88th Oscars.

On Sunday evening, Chris Rock will host the 88th Academy Awards, which, yes, are controversial once more. But, even in the face of counter-programming meant to shame the festivities, the show will go on. Meaning? The uncomfortable jokes, gorgeous dresses and inevitable major screw-ups by voting members will go on.

See Also:
• The Year In Movies. // Our Movie Critics Pick Their Favorite Films And Performances of 2015.
• Summer Better Than Others. // On The Summer's Best and Worst Movies.

So, in anticipation/dread of the movie industry's biggest night, our critics got together to share some thoughts on the nominations. We also give our picks as if we had a say in the matter. Read on for our takes. — Kip Mooney

Kip Mooney: For once, I don't feel like there's a single dud among the Best Picture nominees. Some I clearly prefer more than others, but I don't think we're going to look back in 20 years and ask “WTF were we thinking?!?!?” — at least so far as the the nominations go. Everything from top-shelf popcorn movies (The Martian) to intimate family drama (Room) and comedy (The Big Short) to soul-crushing bleakness (The Revenant) is represented. While I still wish the Academy could've found room for Carol or Inside Out, this is a very good crop of movies. Do y'all agree? Are any of the Best Picture nominees baffling to you?

Javier Fuentes: I mostly agree with you. But I have not yet seen The Big Short, and that seems to be one that most critics can't agree on. Including Brooklyn does bug a little bit mostly since it felt like it was such a lightweight and harmless movie — and, being an immigrant myself, that aspect of it felt like complete B.S. I would have gladly taken that one out for Carol. That is a total masterpiece. But I'm super glad Mad Max: Fury Road at least got a nomination. I would looooooove for it to win. But I doubt it will.

Angela Jones: I agree that none of the Best Picture nominees felt out of place or random. It's a good mix. I'm also probably most surprised by how much love Mad Max got. Not because it's not great — obviously, we all agreed on that — but just because action films aren't normally recognized. I would love for it to win, but I'm with Javi: I don't think it will. I could see [George] Miller getting Best Director, though. The Academy seems to like to spread the love around with the awards. We don't really see one movie sweeping eight, nine or 13 awards anymore. Most are lucky to get two or three. Even with [Leonardo] DiCaprio almost surely getting Best Actor and The Revenant having the momentum going into Sunday, I could totally see Miller getting director.

Javier: Now that you mention Leo, do we actually think that he'll win for real or is this merely a narrative perpetuated by online bloggers?

Angela: I think he will win for real. It could be more for a lifetime award rather than just for this performance, though. He's deserved it in the past, so I have a feeling he will get his due on Sunday.

Kip: I think it's set in stone. If DiCaprio doesn't win for this role, I don't think he'll ever win. The narrative that I hope doesn't come true is Sylvester Stallone winning Best Supporting Actor for Creed. This is a role he's already played six times before, and while he has almost always been charismatic in his performances, Stallone has never been a great actor. The Supporting Actor category is stacked with talented folks who didn't even make the cut — Jeff Daniels and Idris Elba in particular — but, of the nominees, if we're judging purely on performance, I don't see how anyone can beat Mark Rylance in Bridge of Spies. The British stage actor is simply phenomenal in his role as a Soviet spy who never wastes a word. But let's talk snubs now: Which actor was the most deserving of a nomination, but came up short? Mine is definitely Jacob Tremblay in Room. As incredible as Brie Larson is in that one — and I presume she will win Best Actress — if Tremblay, in his first major role, isn't absolutely believable as her son Jack, then that whole movie would fall apart.

Angela: I haven't seen Room yet, but from what I've heard, Tremblay carries the film as much as Larson did. I would be shocked if Stallone won. I know that's what people are saying will happen, but it seems like he might win just so the Oscars can say a person has won a Best Actor and Supporting Actor Oscar for the same role. Yay for weird records no one really cares about! I'm surprised, and a bit sad, that Charlize Theron didn't get nominated for Mad Max. It's really her story, and she portrayed one of the strongest female leads last year with Furiosa. There was so much depth to her character, and I'm sad that the fact that it was an action movie may have overshadowed her performance.

Kip: Out of all the categories, big or small, what win would make you the happiest? For me, I think it would be Inside Out winning Best Original Screenplay. It was my favorite movie last year, and it might be the best thing Pixar has ever done. And no animated movie has ever won for its writing. But Inside Out absolutely deserves it.

Javier: Man, I still don't get y'all's love for Inside Out. It's no Up or WALL-E in my opinion. But, anyway, I would love for Anomalisa to win Best Animated Feature, Spotlight for Best Picture (because Mad Max won't), George Miller for Best Director, World of Tomorrow for Best Animated Short (It's on Netflix! See it now!). Roger Deakins for Sicario's cinematography and, finally, I would love for both of the Carol actors (Cate Blanchett and Rooney Mara) to win in their categories.

Angela: Miller for Best Director would set the Internets on fire. I think Twitter would melt down because everyone would be so excited. But, all gushing aside, I honestly think he deserves it. I’m also on board for Spotlight to win Best Picture since Mad Max probably won’t. Also, anyone else besides Jennifer Lawrence for Best Actress. 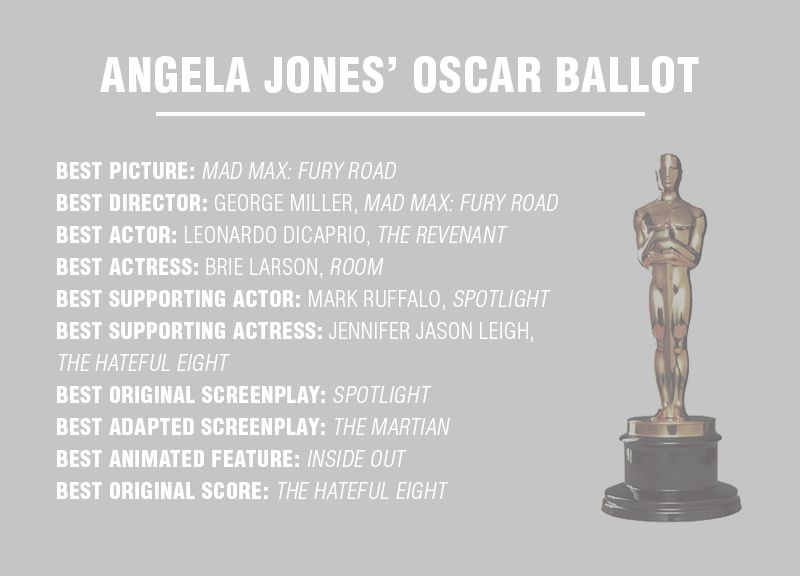 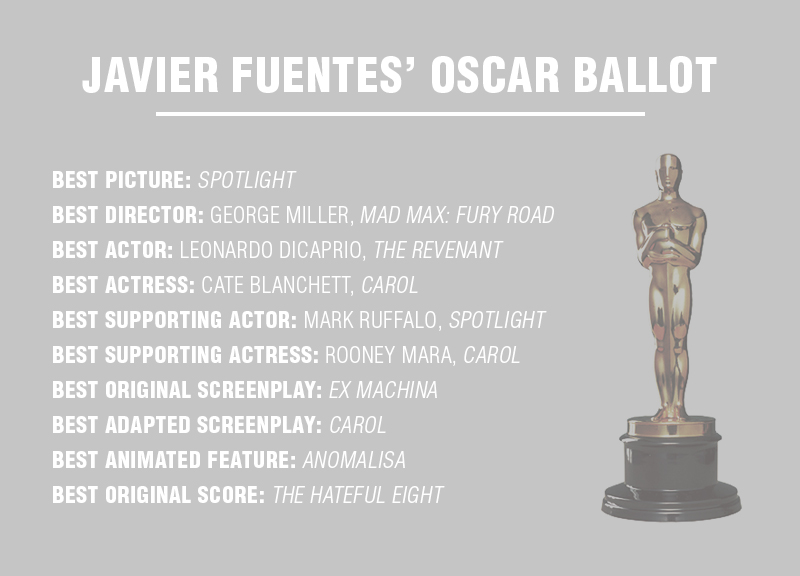