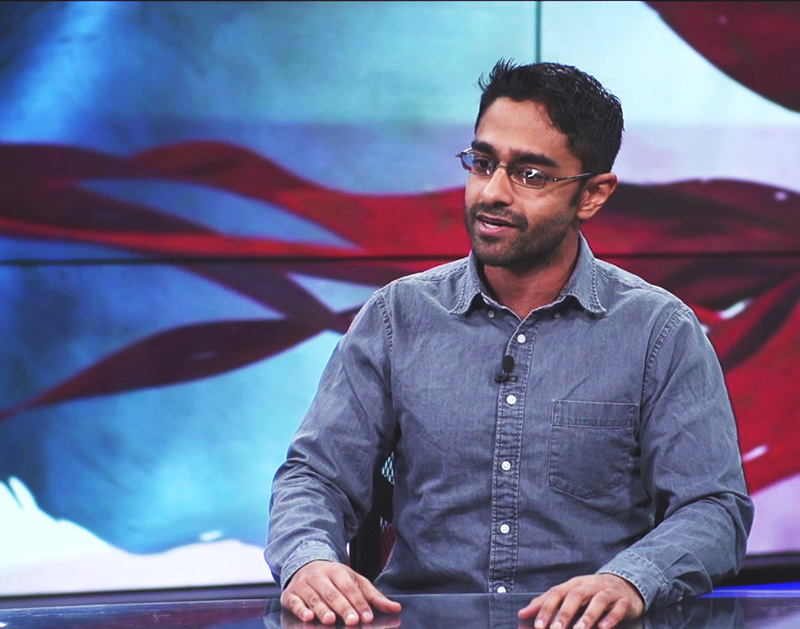 Meet Saikat Chakrabarti, The Fort Worth Native Who’s Helping To Launch The Justice Democrats, A New Bernie Sanders-Inspired Wing Of The Political Left.

You have now entered a parallel universe, one where a serial-tweeting real estate mogul beat the most qualified, true blue Democratic candidate ever to ascend into the most powerful seat in the world.

Now imagine, if you will, two-newborn parties fed up with politicking as usual, two new entities that want to take up the mantles from here by attempting to kick their way out the bellies of their partisan hosts.

In the far right corner, there’s the maturing Trump-wing, which is shedding the skin of conservative tradition while sprinting through the White House front door. On the far left, there’s the even-younger challenger, an entity born to wage a revolution at the front gates of their big (donor) brother, and one that goes by the name of Justice Democrats.

Within the first 48 hours of this organization’s inception, 50,000 members signed up for the cause, over $200,000 was raised and 950 candidates were chosen to oppose their “corporate” counterparts in elections slated to take place across these United States.

If its policies recall the platform of a certain white-haired Democratic-Socialist senator from Vermont, well, you’d be spot on. The ideas presented by the Justice Democrats are indeed almost identical to Sanders’. Specifically, the group aims to crystallize the “political revolution” that Sanders rallied for throughout his presidential campaign. Justice Democrats say they want to “continue the movement that Bernie Sanders brought about, further it and embrace it.”

That’s no accident either, says Fort Worth native Chakrabarti, who was a major component in the success of Sanders’ presidential run through his work in that campaign’s technology realm and who now serves as Executive Director of Justice Democrats. Sanders’ run won 40 percent of the Democratic Party vote while raising $218 million and breaking campaign finance records before conceding to Hillary Clinton in the Democratic Primary.

But rather than be discouraged by that outcome, Chakrabarti now wants to take the lessons he learned from that effort and build upon it.

“I think the Democratic Party will continue to lose if they don’t realize there’s a fight going on in their party right now,” Chakrabarti says. “There’s one side saying we’ve lost our vision and need to go back to being the party that represents working people, and there’s another that thinks what we saw was just a blip on the radar, [that see] economic inequality and corruption in politics as just an issue at this time. And that side, I believe, is woefully wrong. If they keep believing that, they’re going to keep losing to people who put forth something — even if it’s an ugly vision — like Donald Trump.”

During a recent Town Hall meeting, Republican Senate Majority Leader Mitch McConnell was quoted as saying that “winners make policy and losers go home.” It was a snide and hypocritical remark, but one that’s grounded in truth. And the Justice Democrats know that. They’re fully aware that their initiatives can only solidify after they’ve ousted their competition — a difficult heist to pull off, says University of North Texas political science professor and department chair Matthew Eshbaugh-Soha.

“If you have enough support for your view, then you are the majority and get to more or less dictate platforms and priorities,” Eshbaugh-Soha says. “But until that point, you need to work with those in the majority and look for opportunities to achieve your goals, keeping in mind that you’re not going to transform the political party or achieve all of your goals overnight — or potentially ever.”

But what separates Justice Democrats from other liberal-minded, grassroots organizations is their refusal to work with corporate democrats at all. Like their icon Sanders before them, the Justice Democrats have pledged to shun millionaire and billionaire donors for small contributors with their end-game being the complete eradication of corporate money in politics, which they fear can breed corruption.

That is, of course, a honorable goal, especially given how so many fear that our current government is shying away from the democratic roots that our forefathers planted and trending toward a functioning oligarch in which a small group exercises control especially for selfish purposes. With President Trump’s nominations of Exxon-mobile CEO Rex Tillerson, former Goldman Sachs senior executive Steve Mnuchin and former Windquest Group chairwoman Betsy DeVos into his cabinet, these concerns are not without merit, even among more traditional political organizations.

But Texas Young Democrats National Committee Woman Jara Butler worries that, after a presidential race in which many minorities chose to stay home and not vote, taking such a stance, needed as it may be, could be for naught.

“We have a really bad habit of being on our high horse because we think we’re morally superior,” Butler says. “And with this Congress, it’s easy to think that. But we are not. Recognizing and realizing who the base of our party is means that we can’t have a message tailored to one group of people. We need to remember that our base is brown and black, and we need to remember those people before we lose a generation of young black and brown activists who do not feel heard. They’re not going to go to the Justice Democrats; they’ll just stay home.”

“We’re not looking for mayors,” Chakrabarti says. “We’re looking for well-respected members in their community.”

Then, once that base is established, the sky, perhaps, could be the limit.

Says Chakrabarti: “We very much do see ourselves as a successor to Bernie Sanders, both in terms of our strategy and platform.”