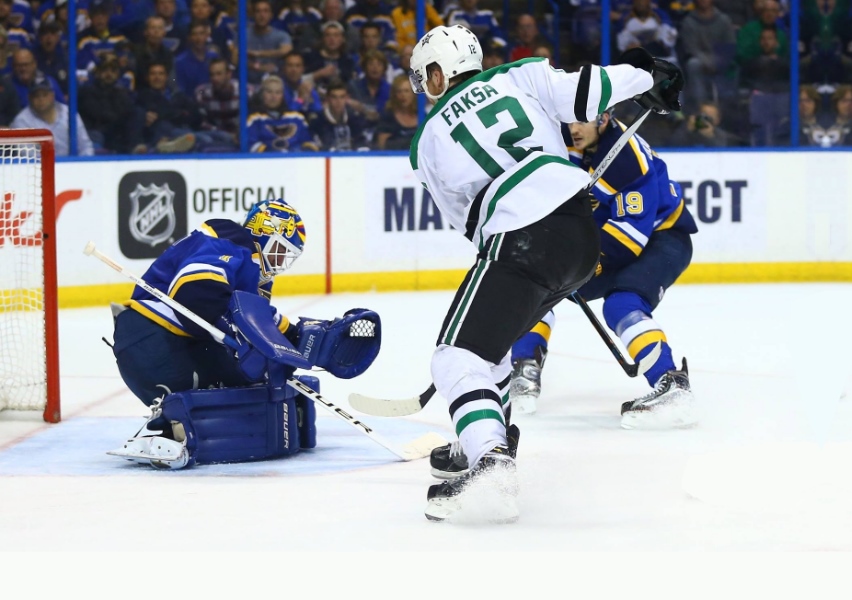 It’s Skate or Die Tonight For the Dallas Stars.

Your Dallas Stars are up against it in their second-round playoff match-up. The battle of styles between the swashbuckling St. Louis Blues and the high-octane Stars has been entertaining enough, sure, but if the boys from Big D can't steal Game 6 tonight, it's all over but the crying.

It will take something special to tie the series, to be sure. Some outside-the-box thinking, perhaps.

Hey Coach Ruff, how about we slide the captain himself, Jamie Benn, between the pipes?

• Darkness Music at St. Louis Blues, 1-6 This game had everything. Bad goaltending? Check. Poor special teams? Check. Ineffective zone exits? Check. Rattled defense? Check. Questionable coaching decisions? Check. We can keeping checking off all the crap that went wrong in Game 3, but you get the idea. Last week, we referenced a Blues player kissing a Star out of admiration, but this week we had a blown kiss of domination. Colton Sceviour had the lone goal for the Stars and was one of the few skaters in Victory Green™ who played well. Strangely enough, Dallas was credited with only one giveaway on the night. Maybe I'm not sure what a “giveaway” actually is, because it looked like the proverbial cheese was sliding off the cracker with regularity. The Stars have done a good job in keeping sniper Vladimir Tarasenko relatively quiet in the series, yet are losing battles down the lineup to the Blues' depth players. But, honestly, there's no reason to go on discussing this game anymore, ya dingus.

• Victory Green™ at St. Louis Blues, 3-2 (OT). The Stars don't take very kindly to ass-whoopins like the one they suffered last Tuesday. This season, the Stars are 6-3 after a loss with 6 goals against this season. Hey, make that 7-3! Cherry-pickin' Tarasenko opened the scoring on a cringe-worthy sequence that saw 18 Dallas skaters allow the dangerous Russian sniper an uncontested breakaway. If you can stand to watch it again, there's a great breakdown of that specific play here. It was ugly, and a continuation of the embarrassment from the previous contest that had the CBC (Canadian Broadcasting Corporation) commentators laughing at Your Dallas Stars' ineptitude. But a funny thing happened on the way to the Blues' Stanley Cup parade: Kari Lehtonen turned an ice cream headache into ice cream war paint. While Dallas was scrambling around in full Keystone Cops mode, Kari was quietly stringing together save after confident save. You can tell when the big Finn is going to have a solid outing when he limits his movements and trusts his positioning. St. Louis continued to assert their will physically (and in the faceoff circle) as the Stars tried to limit the quality of the opposition's chances, finally catching a break on an egregious turnover by a Blues rookie d-man that set up a Radek Faksa wrister that caught Brian Elliot off guard. The tally put the Stars on the board, but more importantly, it acted as the Texas Rangers steroid shot in the butt that they desperately needed. The veteran-laden Blues squad responded by taking a penalty that resulted in Dallas' first power play goal of the series. And, just like that, St. Louis looked beatable. Paul Stansty tied it up midway through the second, and that's all the scoring we saw for 30 minutes, with Kari coming up huge in the closing seconds to send the game to overtime.

“The beauty of it is we just stuck with it, anything can happen, so you just have to stay with the game plan.” — Cody Eakin

Admittedly, when I saw Eakin trip in his own zone and turn the puck over to a barreling Tarasenko, my heart sank. “This is the final nail in the coffin for us,” I thought. “Kari won't be able to stop this. Another Eakin screw up. How will I ever be able to love again?!” The Blues' leading scorer snaked his way behind the net and tossed a centering pass to a wide open Jori Lehtera. “So this is how it ends.” As the Blues centerman released his shot, however, a Cody Eakin whack impeded its progress, allowing Kari to make a save on the low-speed projectile. The Stars regained possession, John Klingberg quickly passed the puck up to Benn, who then moved it over to Patrick Sharp, who passed it back to Eakin. After a slight hesitation, he shot, he scored! Cody looked to the heavens in relief, from goat to G.O.A.T. in a matter of 17 seconds. The Stars win, tie the series and, yes, Sadie, daddy's comin' home.

• Darkness Music vs St. Louis Blues, 1-4. With the Stars back in Texas, a state that values property rights and true free-market capitalism (or at least that's what the good ol' boys will tell you), Benn and Co. were hoping to frack the Blues into submission. The mafia errand boy-looking Robby Fabbri got the scoring going for St. Louis six minutes into the game, and while Goligowski tied the game up later in the first, the Blues never trailed, kept on scoring and, hence, won the contest. It sucks, it really does. Dallas outplayed its competition for long stretches in the ridiculously early matinee tilt, but puck luck was the real difference-maker as the second period uncharacteristically fell apart for the home team. It fell apart and made a hole, and that hole was not something the Stars could not dig themselves out of, if that makes any sense at all, and it really doesn't. There were many opportunities for Dallas to light the lamp, but between hitting posts, a strong Elliot performance and Jason Spezza missing the net on nearly every shot he took, the scoresheet looked awfully bare for our heroes.

“It's not even close to a 4-1 loss. We pretty well played close to our best game, we just didn't finish. Made a couple mistakes where they got a couple great bounces.” — Lindy Ruff

An absolutely crucial “skate or die” Game 6 awaits the Stars tonight in St. Louis. Win, and a grand finale will commence back in Big D, lose and, well…

While thumbing through The New York Times last week, many Stars fans were appalled, yet not surprised, at the disinformation spewed in the publication. This liberal rag had the audacity to report that Your Dallas Stars hadn't won a first-round series since 1998. I know, I had the same reaction as you.

“The only thing necessary for the triumph of evil is for good men to do nothing. — Edmund Burke” — Michael Scott

As the unofficial journalist of Your Dallas Stars on Central Track, I felt it incumbent to set the record straight, so this is what I did. I hopped on the next available flight to New York (first class, of course) stormed into the editor's office and demanded a reprint of the offending edition with the appropriate corrections by the morning. Or, I sent them an e-mail highlighting the error, which was addressed in the corrections section several days later.

Either way, I'm proud of my efforts to keep the flame of journalism ethics flickering in these editorial end times.

No justice, no peace.