The Stars And Blues Are All Knotted Up.

Your Dallas Stars are all tied up with the St. Louis Blues in Round 2 of the Stanley Cup Playoffs, splitting the first two games at home.

Despite being anointed underdogs by the lamestream media, Dallas has matched the Blues punch for punch early in this thrilling series, proving they aren't just a one-trick pony.

A battle of styles will come down to a battle of will as the Stars look to steal a game or two in St. Louis this week. Speaking of Missouri: Did you know that one of America's first public-housing projects, Pruitt-Igoe, was designed by World Trade Center tower architect Minoru Yamasaki? Pruitt-Igoe was built in 1956, plagued by many issues and demolished on live TV in 1972 — a moment described as “the day modern architecture died.” Former occupants of the housing complex developed life-threatening maladies that culminated in a successful lawsuit against the United States government for allowing the military to spray carcinogens over Pruitt-Igoe and other dense, low-income areas of St. Louis. At the time, civilians were told the Monsanto-manufactured spray was a smoke screen test to thwart a potential aerial attack from the USSR. Disturbing stuff to say the least, and quite the case study in architecture, social engineering, class warfare, business ethics and government cover-ups.

But hey, these primaries, am I right?

• Victory Green™ vs St. Louis Blues, 2-1. Is y'all done, or is you finished? I wanted to talk to you as a man in your face, you understand me? When Radek Faksa name come up, you better put some respek on it. I knew a few places you was at, I coulda pulled up but I didn't think that was gangsta, I wanted to come look at your face like a man tell you how I feel. Stop playin' with Faksa's name, I ain't gonna say it no mo. All tree of y'all. There ain't no issue. If there was an issue, you'll feel me. I just came to let y'all know to put some respek on Radek Faksa name. I ain't got no mo talkin', let's rock. (Trigger warning: Salty language.)

I said it already, but I bought lots of Faksa stock this season, and I'm up like a million percents on the Dow Jones 500. He's one of the few first round draft picks in Dallas Stars history to be worth more than a bucket of warm spit. His time spent in the AHL has shaped his game from offensive dynamo to an all-around “Canadian”-style hockey player, something Valeri Nichushkin desperately needed. But, alas, Radek was instrumental in the Dallas victory, assisting on the Antoine Roussel goal and slamming home the eventual game winner. Great effort by our heroes overall to force the Blues into an up-tempo, north-south game with backchecking and blocked shots galore. Outside of the initial 10 minutes, the Stars dictated the flow of the contest, finishing the game with 42 shots on net while conceding 32 — highs for both squads so far this postseason. Kari Lehtonen and Brian Elliott were superb, both making timely saves for their respective squads. The power play was uneventful with neither team finding the back of the net, and somehow Dallas outhit the Blues, which I suspect will not be the norm this series. It was fun to see Steve Ott back in the AAC doing Steve Ott things, even if he only saw five minutes of ice time. I had a mildly entertaining off-ice interaction with Otter back in 2006, and I'll share it with you once we defeat these clowns and move onto the next round. Until then, they are all poopy faces to me.

“We didn't end up where we were at the end of the year by playing weak defensively.” — Lindy Ruff

• Darkness Music vs St. Louis Blues, 3-4 (OT). It all started so nicely. Alex Goligoski opened the scoring on a wicked one-timer from a no-look Jamie Benn pass early in the first. It would have been nice to build on that momentum, but the Blues' Patrik Bergland quickly answered with a beauty of his own less than a minute later. Dallas ended the first period with three goals against and a change in net to start the second. Now, mind you, I don't believe Kari Lehtonen was to blame for the first period collapse, but Antti Niemi stepped in and did his part to keep this game within reach and, to Lindy Ruff's credit, the goalie swap seemed to ignite a bit of fire under the Stars. Dallas was able to tilt the rink towards the Blues as they scratched and clawed their way back on the heels of Mattias Janmark and Benn's goals to send the game to overtime on a high note.

The brief overtime featured mostly even play, with both teams getting quality scoring opportunities — until Roussel completed his hat trick of penalties. I know many Stars fans were up in arms about the interference call that led to the game-winning Blues power play goal, even moving the Dallas faithful to chant “refs you suck.” But it was a penalty. A dumb penalty. The Stars deserved a better outcome after storming the Blues in the third, while scoring as many goals as the Blues had shots in the frame. Yup, the Blues mustered a meager two shots on goal in the third. Keep playing like this and the wins will come for Your Stars.

Also, Nichushkin made his first appearance of the series in place of an injured Patrick Eaves, and looked terrible. I'm not sure he even saw the ice after the second period. On the other hand, Cody Eakin turned in an excellent performance, even prompting a hockey novice friend to text me “that ekin dude is fast.” Cody will have to continue to provide inspired play in the absence of the still-recovering Tyler Seguin for the Stars to be competitive.

“We had our power plays and didn't do a good-enough job.” — Lindy Ruff

To put it simply, we've gotta win at least one in Nelly's backyard. There'll be three opportunities this week to that. On Tuesday, the teams head to St. Louis for a Game 3 that doesn't start until 8:30 p.m. Isn't it a bit ridiculous to start a game that late on a school night?! Then the puck drop for Game 4 is at a much more reasonable 7 p.m. on Thursday. The now-necessary Game 5 happens at a yet-to-be-determined time on Saturday.

Game 2 saw Jason Spezza hit a headshot that knocked the contact right out of Brian Elliot's eye. If you'll recall, Spezza rang a shot off the noggin' of Minnesota goalie Devan Dubnyk in the last round that sent the netminder on a totally legitimate, normal, fire-related free fall. Coincidence? I remember a video clip of Spezza in Ottawa where he “accidentally” slashed the hell out of the ref's shin during a faceoff with a meaningless eight-tenths of a second left in the period. I'd show it to you, but it has mysteriously succumbed to copyright violations and is now unavailable on the YouTubes after it started to pick up a modest amount of popularity. Coincidence? Is Spezza hiring an internet firm to try and clean up any less than favorable content on his behalf like the Hillary Clinton campaign? I really doubt it. Is Spezza a dirty player? Of course not. But I don't want to hear that he's this innocent little girl with a basket headed through the woods from grandmother's house. I don't want to hear it.

Blues captain David Backes certainly had eyes for your captain, Jamie Benn, forcing his body all night at the frontrunner for the new EA Sports NHL 17 cover (#NHL17BENN). At one point, Backes challenged Benn to a fight (presumably from the frustration of his unrequited advances), to which Benn politely declined. He was later seen kissing the nape of Benn's neck during a stoppage of play. Ew, so gross. There's no way of knowing if that bit actually happened, but if you pictured David Backes kissing the back of Jamie Benn's neck, then I'd say my work here done.

Behold, the start of my career as a faux reporter for the Dallas Stars back in 1997, full of bad grammar, misinformation and Microsoft clipart. Some things never change… 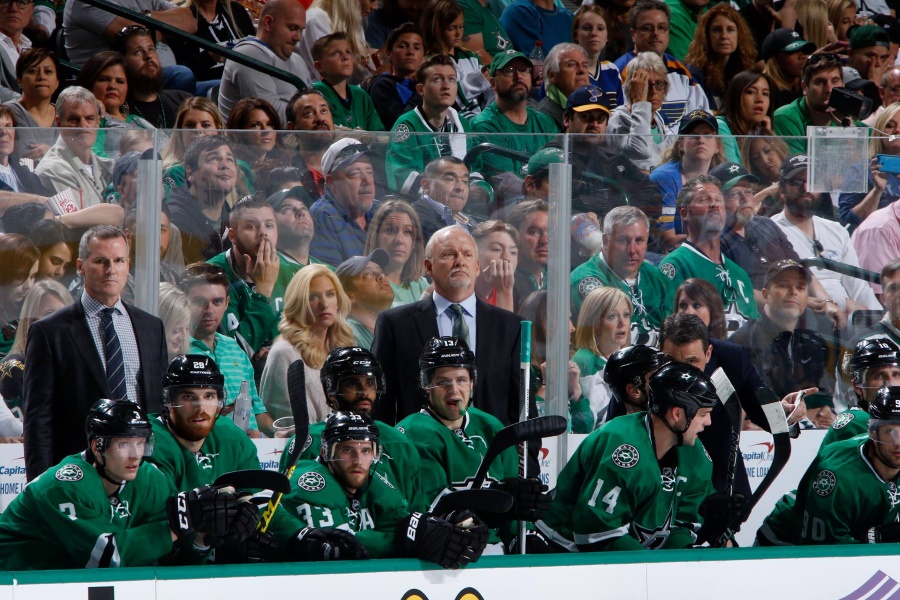