For Its Next Act, Emporium Pies Is Hitting the Road. 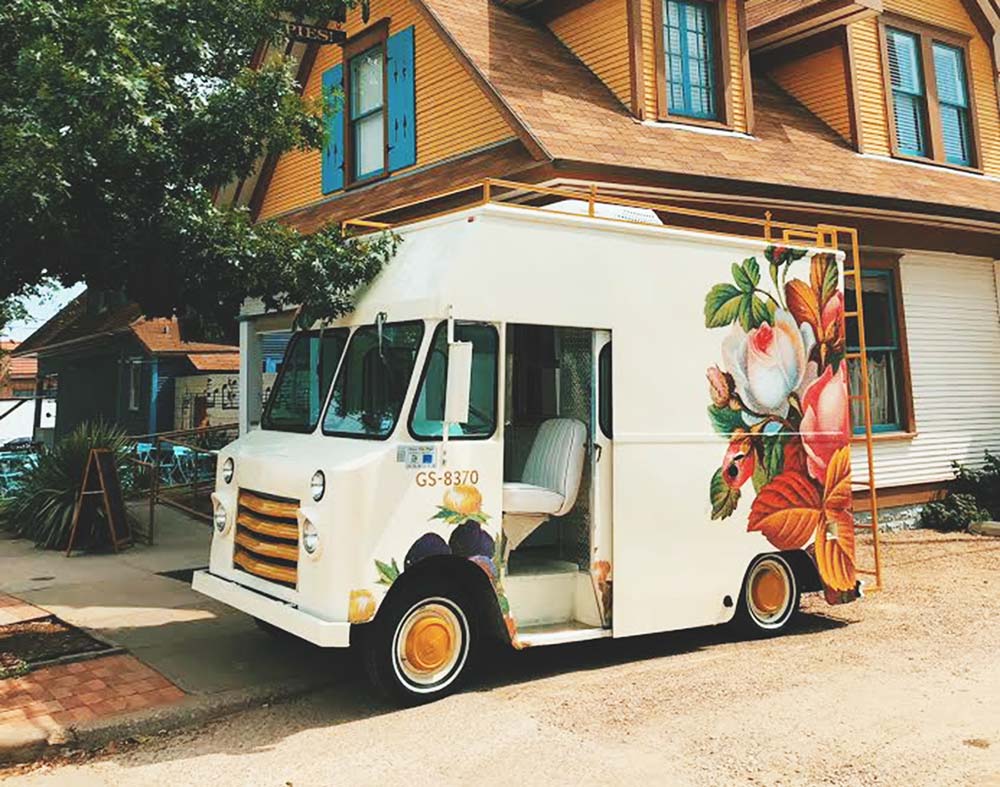 Co-Owner Megan Wilkes Tells Us Why, With Three Stores Under Its Belt, Emporium Pies’ Next Move Is A Truck That’s Bringing Pie And Ice Cream To The ‘Burbs.

Over in North Oak Cliff, right on the edge of the Bishop Arts District, sits the most adorable yellow-and-blue house — a cute little abode that, well, was never really supposed to be the headquarters of a burgeoning empire.

And yet, here we are, six years after the Emporium Pies team took over that location, which they initially opened as a pop-up shop. Now, not only is that spot a place where folks with a taste for pies have long known they can find everything from classic fruit-filled options to buttermilk delights, it’s also the eldest child in the Emporium family, which has since expanded to a three-location operation across North Texas.

Turns out, though, those first three stores could just be the start of Emporium empire. We recently caught up with Emporium Pies co-owner Megan Wilkes to discuss how her company became convinced that diners would pay top dollar for especially well-done pies, why the store hasn’t opened as many locations as certain customers may have hoped it would and why, in the coming years, that all could soon change.

Before what get into what the company is up to now, can you tell us how Emporium Pies got started?
Emporium Pies started out as a dream shared by myself, and Mary Sparks. I was in the interior design industry and Mary was studying hospitality management when we were introduced at the Amsterdam Bar by a mutual friend who knew we both had dreams of owning our own bakery. We quickly realized that Dallas could use a bakery that focused on creating a single, perfected product from scratch, by hand, that also focused on a community environment, providing seating both indoors and outdoors with the invitation to stay a while. The humble beginnings of Emporium Pies began in two East Dallas apartment kitchens, and slowly grew selling pies for the holidays in 2011. By September 2012, we had our first brick-and-mortar shop at 314 North Bishop Avenue. When the shop first opened, there were only three of us running the entire operation. We quickly determined that there would need to be a much more robust staff to handle the pie hunger in Dallas, and so the shop began to grow. After the first Thanksgiving, which involved an air mattress on the floor in the dining room of the shop and an all-nighter, the decision was made to build a larger kitchen and open a second store in the historic downtown McKinney Square. Since then, we have added a third store in Deep Ellum.

Why did you start your business in Oak Cliff?
When we first started baking and selling at shops and farmers markets, we did so with the intention of gathering data to see where we would fit in best with the neighborhood. We were selling pies that are five to 10 times the price of pies at the grocery store, and we needed people who saw the value in what we were making — hand-made pies with quality ingredients and integrity. The folks in Oak Cliff were very receptive to our product. We sold a ton of pies out of Urban Acres in our first holiday season, and all of the neighbors picking up their farm shares were excited to try a pie that was not full of unnecessary ingredients. Oak Cliff did what it does best: It welcomed us in.

Happy New Year’s Eve! Our shops will be closing at 6pm this evening. Everyone have a safe and happy holiday. We will also be closed tomorrow for New Year’s Day.

Since then, Emporium Pies has become a bit of a Dallas institution — so much so that, when Shake Shack came to Dallas a few years back, it incorporated your pies into one of its signature Dallas milkshakes. Can you tell us how that partnership came to be?
I stood in line at Madison Square Park in Manhattan for 45 minutes — a short line for Shake Shack! — on my first trip to New York City in 2010. I fell in love with the idea of a place that makes something so good that people were willing to stand in line for a long time to get it, even if they could get a burger at 50 other places in the same three blocks. Shake Shack was, and is, a huge inspiration to us as a success story of people who are doing it right. When Shake Shack reached out to us about a partnership, we were thrilled — because we would be able to work with a company that has inspired us, but also because that meant we were going to be getting some of those cheese fries in Dallas ASAP. They had heard about our pies through the grapevine, we shipped some to their headquarters, and the rest is history. It is an honor to have our pies featured in such a cool and well-run restaurant, and it is always fun to take a selfie in front of the Emporium Pies name on the menu when I am in line for a Shack Stack.

I personally can’t think about Emporium Pies without asking you about your gorgeous branding, and that cute little house in Bishop Arts that serves as your flagship store. Who makes all these smart creative decisions?
I have a background in interior design and construction, and my husband was a partner in a branding firm when our shop opened. I design and build our shops, and Paul oversees the design and brand. We have worked with many talented designers over the years. Scott Hill did our original brand, and we have had updates by Steve Schroeder, and help with our social from Gabriella Thompson. Our website was built from scratch by the insanely talented Kyle Turman. With everything we do, we try to invoke a sense of nostalgia and inclusiveness while still creating modern spaces and feelings.

Beyond that original Bishop Arts location, you’ve since expanded to open locations in Deep Ellum and in McKinney. What’s next?
We have had people in smaller towns like Waxahachie and Southlake asking us to open stores in their towns for years. We would love nothing more than to put a lovely pie shop in every town! But since we are owner-operated, it really is not feasible to grow that quickly with integrity. Our new PiScream truck concept is our solution for that! We can take her  — her name is Bessie — to towns far and wide to spread pie love wherever she goes! That is our plan for now, anyway. But, like we did in the beginning, we will probably use the truck to test markets that might be good for a new shop. So, if you see us in your town, come see us so we know you’d come to the shop!

Hi I am Bessie, a 1962 Chevy P10 shorty, I have recently had “some work done” and now I am here to deliver ice cream and pie to hungry Pie Holes everywhere.  Follow this account if you want to stalk me and get something delicious.

That sounds amazing! What else can you tell us about the truck?
It’s our newest branch of EP. We have always sold ice cream for an a la mode option at our shops, but for a while we have thought that we should make our own ice cream so we can be true to our brand’s promise of not adding unnecessary preservatives and making all of our items from scratch. Things just taste better that way and it is always best to have your own control over as many things as possible. After we developed a killer vanilla ice cream to sell in the stores, we decided we should start mixing pie in — and that was a great decision. Because we have so many fans of our traditional pie menu, it is often difficult to come out with new pies or switch up flavors without ruffling feathers. With PiScream, we can do limited batches of flavor combos — like our Drunken Nut and Smooth Operator Pies mixed with chocolate ice cream, or our Ebony & Ivory pie mixed with strawberry ice cream —  and we can switch them up with more daring flavor profiles. It is a win for everyone. We are selling the PiScream in 1/2 “PieNTS” at our stores, but with something this delicious, we have to take it on the road. So we found ourselves a little 1968 Chevy P10 rust bucket, and we have lovingly restored her into the tiniest truck you ever saw. We are so excited about how it turned out, and we hope that everyone else is too. We had our soft-ish opening last weekend in Bishop Arts, and we will be taking the truck to festivals and events all over in the coming months. She is also available for rental for weddings and events, and the schedule [will be updated] on Instagram.

Image courtesy of Emporium Pies.  Know another food business worth highlighting in this space? Message foodbitch! Like a good cover band, she takes requests (so long as they don’t totally suck).