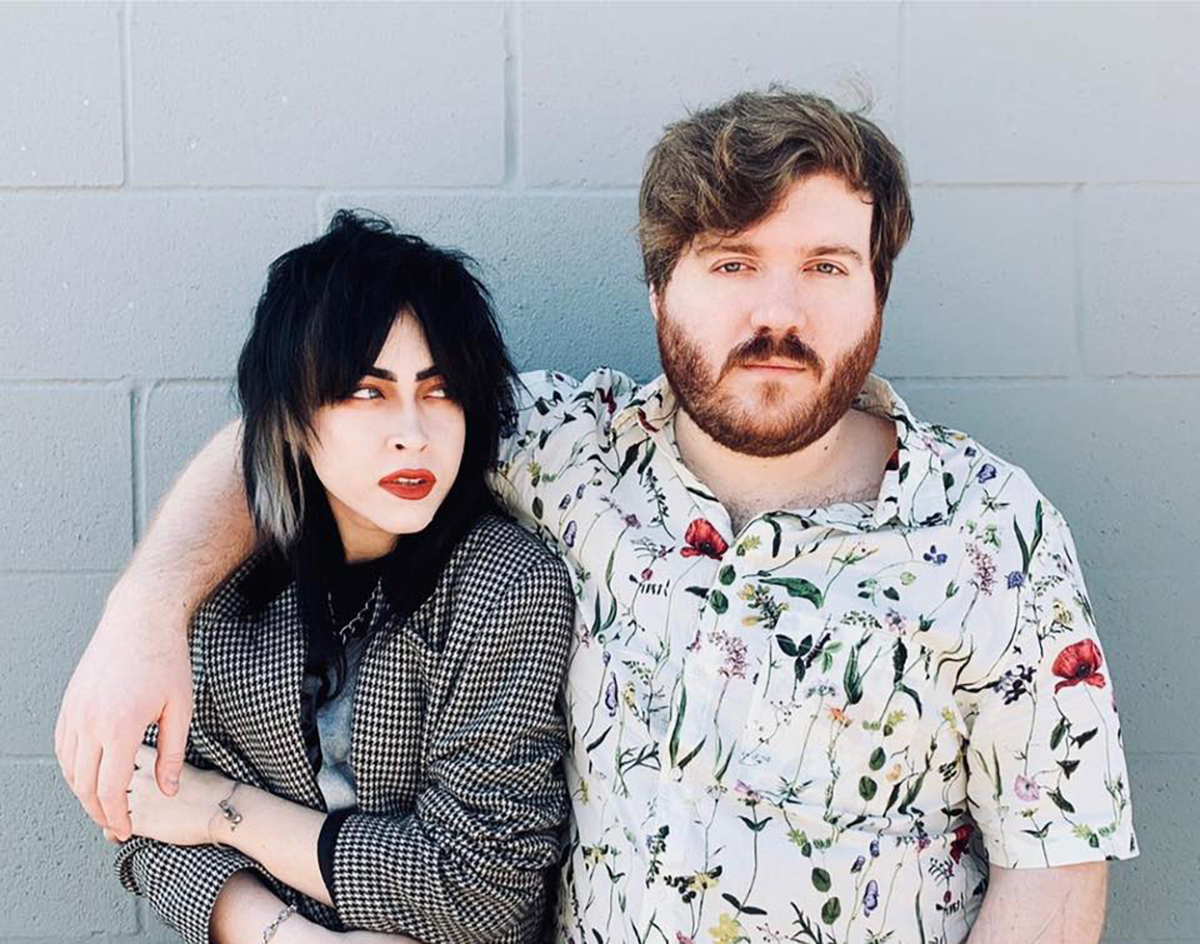 Scott White and Leah Lane couldn’t be any more different upon first impression.

But, despite their differing appearances (Lane jokes that she looks like White’s “weird goth cousin you only see at a family reunion”) and decidedly contrasting personalities, the duo has found common ground through their collaborative music project Deep Red, which thrives as a balance of antithesis.

Now, a band we have already described as one of the most exciting new acts in North Texas is on the eve of releasing its debut EP.

Neither member is a stranger to the Dallas music scene in the slightest. White is the bassist for mammoth rock band Duell, and Lane is the charismatic frontwoman of rising goth-rock outfit Rosegarden Funeral Party. Over the years, those acts have regularly shared bills at various North Texas venues, including a show at Ruins in Deep Ellum, which ultimately lead to the inception of Deep Red. That night, Duell performed a cover of My Bloody Valentine’s “Only Shallow,” much to the delight of Lane and her Rosegarden Funeral Party bandmates.

“A week later, I posted on Instagram about wishing I knew people I could start a band like that with,” White says. “[Lane] was the first and only person to respond, and we went down the ‘You’ve heard this fucking band, right?!’ rabbit hole for a while, and then we got together and wrote ‘Things We Can’t Say.’”

Lane’s immediate interest emanated from her early interests in shoegaze purveyors such as Pale Saints and Lilys — a sound she says she had always wanted to delve into. Seeing White’s Instagram post, she recognized the opportunity for finally tinker an aesthetic she’d long fancied.

“I sent [White] a demo for a song that I had written and, within a day, he sent me the song [back] fully filled out,” she says. “I remember sitting in my car and my eyes welled up with tears — because he’s such an incredible composer.”

A year and a half later, the two’s collaboration has born a fresh, fuzzy and authoritative sound — one bolstered by White’s Duell bandmates Mike Doty on bass and James Van Damme on drums — that includes copious shades of shoegaze in its blend.

For White, his interest in such a sound dates to his pre-Duell days, back when band after band he was part of failed to take off in a ways he’d hoped for any number of reasons. His biggest frustration with those bands, though, was his perception that no one really gave a shit about what he was writing.

“I would present songs to other people after those bands broke up and tried to start something up and always either got dodged, or people just didn’t want to do it,” White says. “So there is a huge level of fear in putting this out.”

In Deep Red, though, Lane’s strident excitement balances White’s default skepticism. White credits Lane’s perspective, along with the studio guidance of in-demand Denton producer Michael Briggs, for chipping away at his self-doubt and allowing Deep Red to saturate.

“It’s good to have those two around,” White says. “They believe in it.”

Ultimately, its members’ stark differences aside, the crux of Deep Red’s inspiration comes from the duo’s most significant similarity: their ability to connect through each other’s honesty and shared experiences of trauma, heartache and mental health struggles. White says that his longstanding self-doubt has started dissipate through the bond he has discovered with Lane. Both members say that Deep Red is, above all else, a form of catharsis for them.

For her part, Lane is hyper-aware of the therapeutic purpose of her artistry and of the differences between Deep Red with her other outfit. While she describes her work in Rosegarden Funeral Party as evocative of pulling yourself back together, she sees Deep Red as an initial, unfiltered reaction to pain.

“I don’t think I would have made it through the last year without Deep Red,” Lane says. “It allowed me an emotional outlet that I really needed — and that’s why I think those songs are so lyrically volatile. Scott and I are both expressing heartache in a very similar way in this project.”

As for White, he’s finally enjoying the chance to express himself in the way he yearned to for so long.

“The lyrics are just about finally getting to say a lot of things that I didn’t say to people before,” he says. “So this is kind of my attempt to pull myself out into some form of a light.”

Before Deep Red’s debut EP, Before You Leave, drops on Friday, March 6, enjoy an exclusive premiere of the Deep Red song “Box of Memories” below.