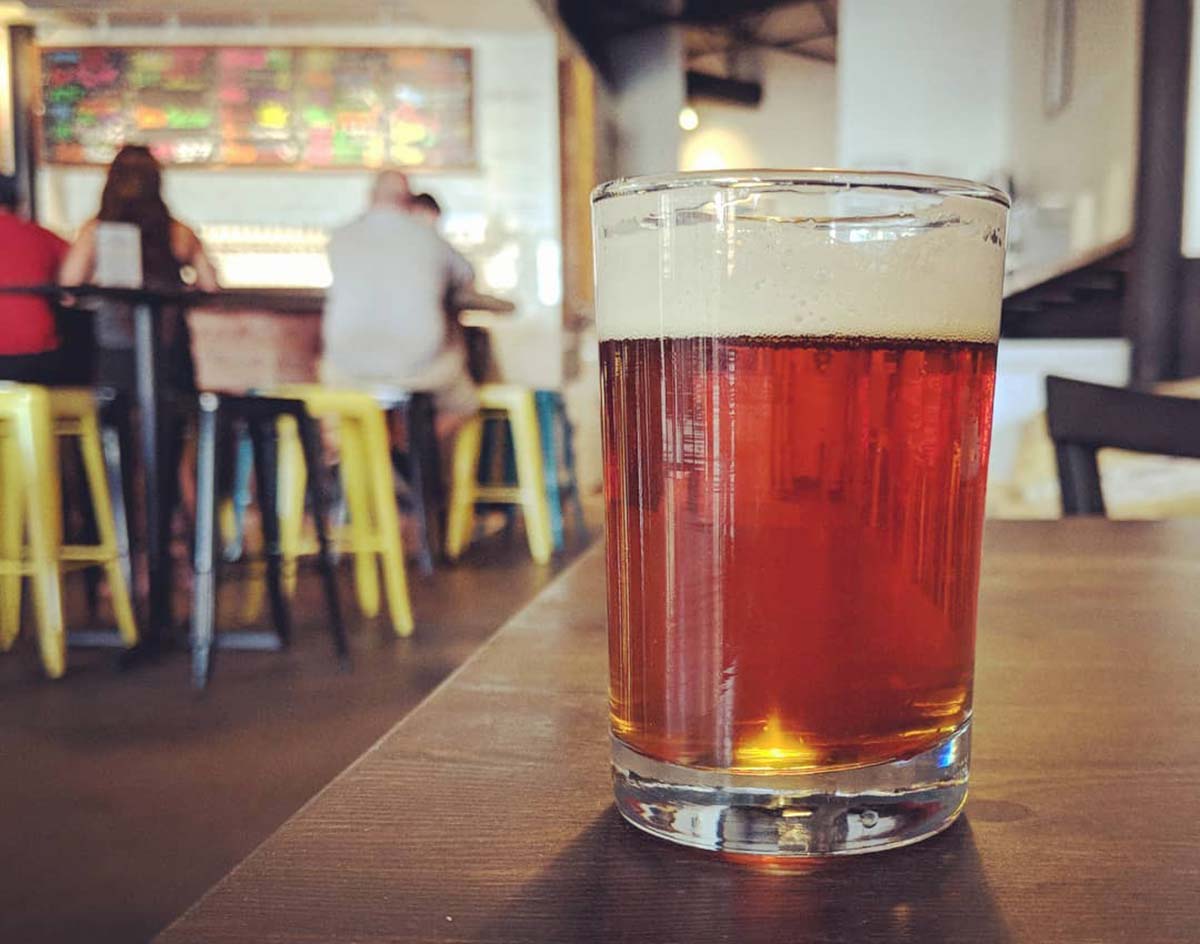 Most Of The Brews From This Lakewood Hole In The Wall Never Make It Past The Doors, Making Its Efforts To Go Above And Beyond All The More Impressive.

The East Dallas brewery, taproom and filling station On Rotation was born a familiar beer love story. Yes, this spot’s boy-meets-girl-meets-home-brewing-kit-meets-opportunity story is a tale as old as craft beer time.

Although Jacob Sloan is quick to describe the business that he and his wife Lindsay launched in early 2015 as a “typical” story, the success of their tucked-away location in Lakewood is anything but ordinary. Which is fitting, actually: One thing that truly sets On Rotation apart from the rest of the Dallas craft beer scene is Sloan’s insistence on experimentation in his brews.

For example, did you realize that beyond the guest beers and ciders it hosted in its 40-tap space, On Rotation also served up 53 separate brews of its own in 2017? And did you know that the brewery is already on pace to top that output in 2018?

Well, now you do. And, well, those are just a few of the many interesting things we learned during our recent catch-up chat with Sloan. For more intoxicating nuggets along these lines, take a sip on the below Q&A.

On Rotation hit the scene in early 2015. Can you tell us how the place came to be?
We have what some might call a “typical” backstory when it comes to opening a brewery or brewpub — but we at least finish it with a twist on the end. Lindsay bought me a homebrew kit as a gift that went unused for several months before we ever broke it out. But, once we did, we were hooked. Over the following years, we got more and more into developing our own recipes and trying unusual ingredients in a beer. Near the end of our “homebrew era,” we upgraded our home kegerator and had four beers on constant “rotation” in our guest bedroom. We also took several beer-cations to some of the best craft beer towns in America — places like Portland, San Diego and Boston. We fell in love with “brewpub culture,” and the neighborhoods that embraced and became as much about the beer as the beer was about them. Our favorite part of homebrewing was coming up with new recipes and trying a variation of a brew we’d done a few times before. So we were never really interested in your typical brewery startup that brews a “core four” beers and ramps up production to get those beers into the hands of more folks. If we ever got into the brewing business, we wanted it to be part of the neighborhood and the city itself — for the love of the craft as much as love of the neighborhood — and full of the creativity we found in brewing. It took us two years to find the perfect spot in Lakewood, the neighborhood we call home, but, once we did, we flipped the normal construction model on its head by building the taproom first, and brewery second.

OK, I definitely didn’t realize that. What else don’t people realize about On Rotation?
There’s a lot to not know when it comes to On Rotation! As a brewpub without food, we confuse a lot of people in Dallas. But I’d say the thing most people don’t realize is that we are a unique business with only one location. We’re as local as it gets! Most of our beer lives within a 20-foot bubble its whole life and is only served in our taproom. Many people also don’t realize that we brew our own beer on-site, which is becoming harder not to realize with the number of taps we’re taking over with our own beers. These days, we fill more than 10 of the 40 taps we have with our own in-house beers. We’re unique to the Dallas scene in having as many taps as we do, and in offering growlers and crowlers in addition to serving our own beers. So many of the other beer producers in this market are breweries who cannot sell packaged beer to go or that have guest taps in their taprooms.

Given how much beer-drinking consumes your work life, do you drink much at home? If so, what’s your poison?
We tend to be equal-opportunity drinkers. We’re always inspired by new flavors or creations, be it cocktails, beer, wine or other beverages. These days, we drink a lot of IPAs and beers of the hoppy kind at home. But we also love saisons and sours! Our latest empty growlers were full of upcoming releases for our anniversary. We also drank some cans we scored at Modern Times when we were in San Diego.

What about your favorite spots for eating around town?
You can usually find us at Goodfriend, The Common Table, Meddlesome Moth or LUCK. We tend to stick where the craft beer selection is top notch. But we also spend a lot of time at Taco Joint with our 19-month-old. Parents have to heart the fast casual.

What’s the most exciting thing you’re working on right now?
We’re working on a few collaborations with local businesses in East Dallas to really expand the reach of the “brewpub culture” that we love so much. We’ve just got a lot on the horizon this year as we’re working towards selling our beer outside the taproom for the first time and being on taps at local, surrounding businesses. It’s a challenge for us, being on an extremely small system to have beer for our taproom as well as for accounts that we’ll sell to, but we want to show more people what we’ve been up to and we feel as if having our beer on tap [elsewhere] should help that. We’ve got plenty of new beers in the works, too. We released 53 unique beers last year, and we have plans in 2018 to surpass that while also working in some more specialty beers and having our beer available more places. In short, it’s going to be busy around here! But we hope we still have some time to high five some folks in our taproom and get feedback on our recent releases. That’s our favorite part of this business — sliding a glass across the bar and talking to someone about the beer we’ve made. We feel like we’re brewing the best beer we’ve ever brewed at this point, three years in. And we still enjoy seeing the face of a new customer as they try our beer for the very first time.

Cover photo via On Rotation’s Facebook page. Know another food business worth highlighting in this space? Message foodbitch! Like a good cover band, she takes requests (so long as they don’t totally suck).