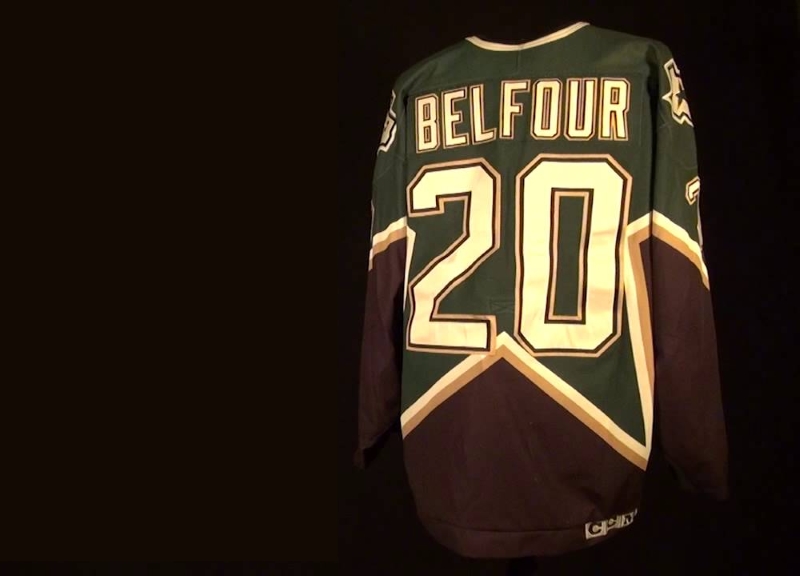 Eddie “The Eagle” Belfour has been known to enjoy a drink or two in his day. Those around for the Dallas Stars’ best years no doubt remember how the first-ballot Hall of Fame goalie once attempted to bribe a cop with $1 billion following a drunken incident at a Dallas hotel early in the 2000-01 season, following back-to-back appearances in the Stanley Cup Finals.

More recently, Crazy Eddie has found a way to turn that passion into a money-making opportunity. Along with his 26-year-old son Dayn — a former Junior Hockey League player himself, who played for his dad’s old Winkler Flyers squad — the pair plan on opening a distillery in Little Elm by early 2017. The Plano suburb, the younger Belfour says, is one of the only alcohol-friendly places in the Metroplex.

For his old man, it’s just an opportunity to do something a couple things loves — hanging out with his son and sipping whiskey.

“This is a chance to get together with my son and start a business, the next chapter of our lives, and hopefully turn it into a world-class distillery where our bourbon is known all over the world,” Belfour (the elder) recently told the Associated Press.

It’s something he’s betting on, in fact. He’s even putting his own memorabilia where his mouth is, in a sense. To earn the seed money to start Belfour Spirits, the two-time Vezina Trophy winner auctioned off 66 pieces of his personal NHL memorabilia back in February, netting nearly $179,000 in the process.

The most coveted item in the sale? The Olympic gold medal he earned in the 1992 games. They netted $34,777. Elsewhere, masks he wore while playing for the Chicago Blackhawks and Dallas Stars brought $15,307 and $7,853 respectively. Belfour also parted ways with a sweater he wore while playing against the Buffalo Sabres in the 1999 Cup year, autographed sticks and his replica Vezina Trophy.

For the father-son pair, though, they say it’ll be worth it. For one thing, Eddie says whether or not he held on to all that stuff that was collecting dust in his attic, he’ll always have the memories.

Adds Dayn, the new distillery, located north of Old Highway 24 and east of Oak Grove Parkway, is going to be “a central hub for fun.” Aside from making vodka, whiskey and gin — with designs on adding rum and tequila to that lineup sometime down the line — they’ll be able to host weddings, concerts and other events while serving cocktails on site.

“I want a group of people to be able to talk too loud and have too much fun here,” Dayn tells The Little Elm Journal.

We’d be inclined to believe him, too. If anyone knows anything about having “too much fun,” it’s unquestionably his old man.