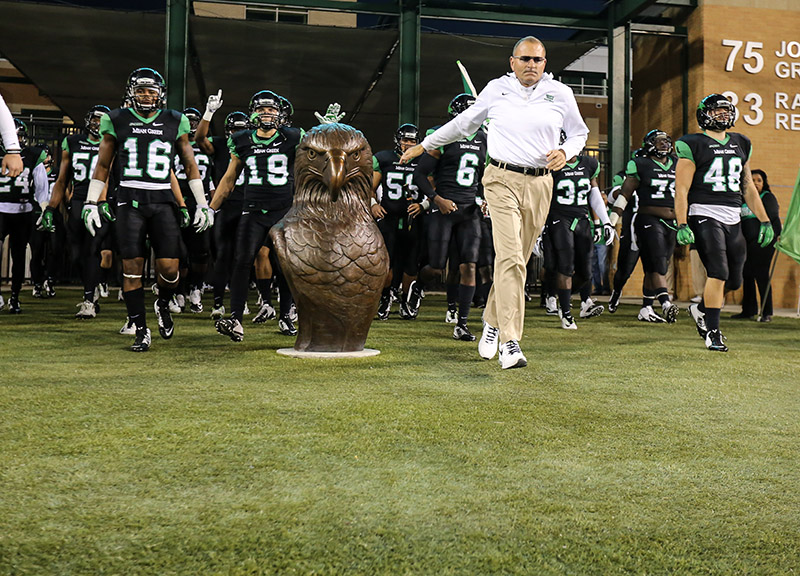 Saturday night’s 31-10 win over Florida Atlantic University was huge one for the University of North Texas football program. Also huge? The sentiments head coach Dan McCarney expressed after the win at the team's home stadium.

No, the talking heads at ESPN weren't going to be staying up late, talking about North Texas' first conference win of the season or how this win maintains their bowl eligibility or anything like that. That air time, it was predetermined, would be reserved for Alabama's win over LSU or Kansas State loss to TCU. But this win still meant a lot to the team, which sits now at 3-6.

“A lot of people on the outside of this football family were probably throwing dirt on us, [saying] 'The season is over,' 'You're not worth a damn,' 'You haven't won a conference game,' [and] 'You stink,'” McCarney acknowledged after the game. “But don't throw dirt on us around this place.”

Since McCarney took over this North Texas program in 2011, he's worked hard to change the culture — a culture that once accepted losing seasons and low attendance.

Now, the team accepts nothing less than hard work, dedication, camaraderie and winning — something that can be seen in the program's Beyond The Green web video series. And McCarney's very much to credit for this change in direction. His slogan for the team these last two seasons has been “Hit Six” — as in, his team's goal is, flatly, to win six games and earn bowl eligibility.

It hasn't been easy. At this time last year the team, led by a large senior class, had already reached bowl eligibility and was battling for tops in the Conference USA. This year, a team of mostly underclassmen has fallen flat on those aspirations. Coming into this weekend;s homecoming game against FAU, the team was 2-6 and facing elimination from post-season play with a loss.

“The dog is most dangerous when its backed into a corner,” senior offensive lineman Mason Y’Barbo stated after the game, in which the team pulled out a must-win. “That's where we’re at: It's win or go home every week and that’s how we took it.”

Earlier in the week, McCarney challenged his offensive line to dominate the line of scrimmage and get the Mean Green back to its recent identity of tough, clock-control running. Y’Barbo and the line responded by paving the way for 235 yards on the ground and three rushing touchdowns for the offense.

“You challenge the O-line, [and[ it's like challenging a pack of wolves to eat some food,” junior running back Antoine Jimmerson said when asked about McCarney and the offensive line. He would know, as he benefited the greatest from the offensive line's domination, earning 114 rushing yards and a touchdown on 17 carries. But he wasn't also: Starting running back Reggie Pegram also ran for 98 yards.

And the defense played well, too. Florida Atlantic may not be a powerhouse program itself, but its skill players are speedy and capable of big plays. But the Mean Green defense kept that offense in check, holding it to just 95 yards rushing and 102 yards passing. The defense pinned its ears back, too, walking away from the game with five sacks, an interception (by Buyers) and a forced fumble.

From here on out, the defense and offense alike will have to maintain these levels of play as each game North Texas will play — starting with its next matchip, in which the team faces conference foe UTEP in El Paso next weekend — is a must-win game if bowl-eligibility is to be achieved.

“Hit Six looks like its way out there and it's a long ways off and all those things,” McCarney said after the game. “But don’t sell these guys short.”

Added junior defensive back Kenny Buyers: “It's do or die now.”

Head Coach Dan McCarney leads the Mean Green on the field for their homecoming game against Florida Atlantic University. This was the 1,000th game for the North Texas football program.

North Texas running back Antoine Jimmerson (22) runs past FAU defensive back D’Joun Smith (21). Immersion ran for 117 yards and a touchdown in the game.

North Texas tight end Marcus Smith (18) celebrates after catching a touchdown pass in the first half. The touchdown catch was Smith’s fourth of the season.

North Texas linebacker Derek Akunne (7) celebrates after a tackle. Akunne led the team with 10 tackles and a sack.

FAU quarterback Jaquez Johnson (12) scrambles away from the North Texas defense and attempts a pass. Johnson, a dual-threat quarterback was limited to 99 yard passing and 11 yards rushing.

North Texas running back Reggie Pegram (2) lowers his shoulder near the goal line. 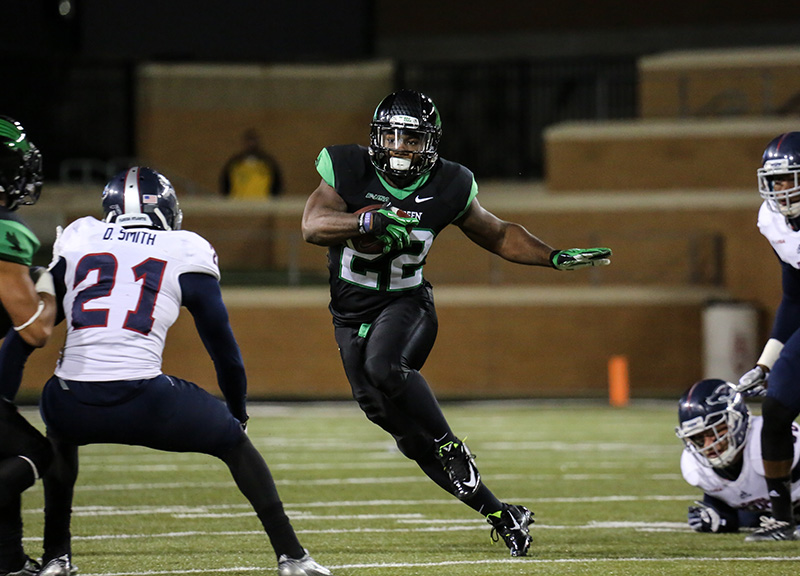 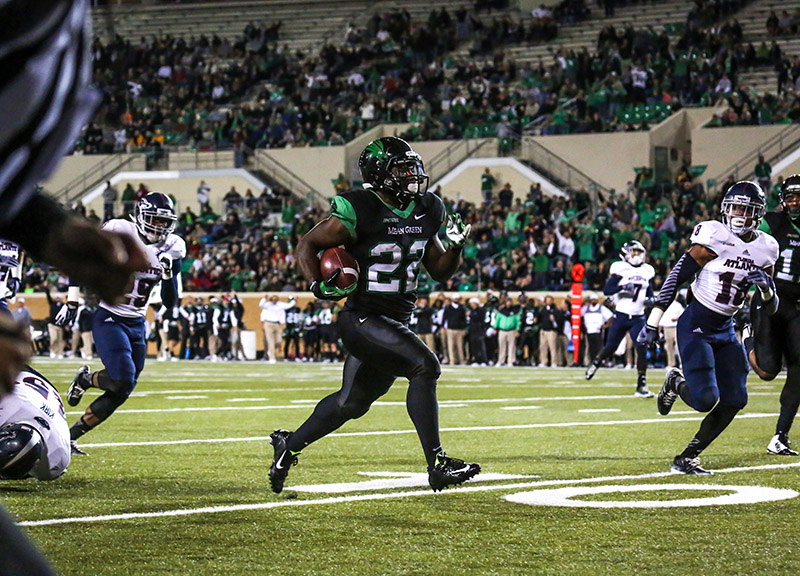 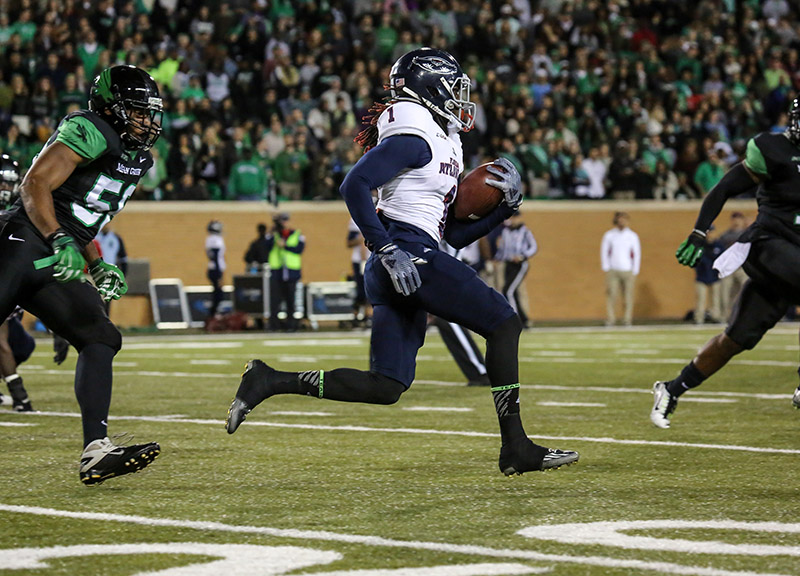 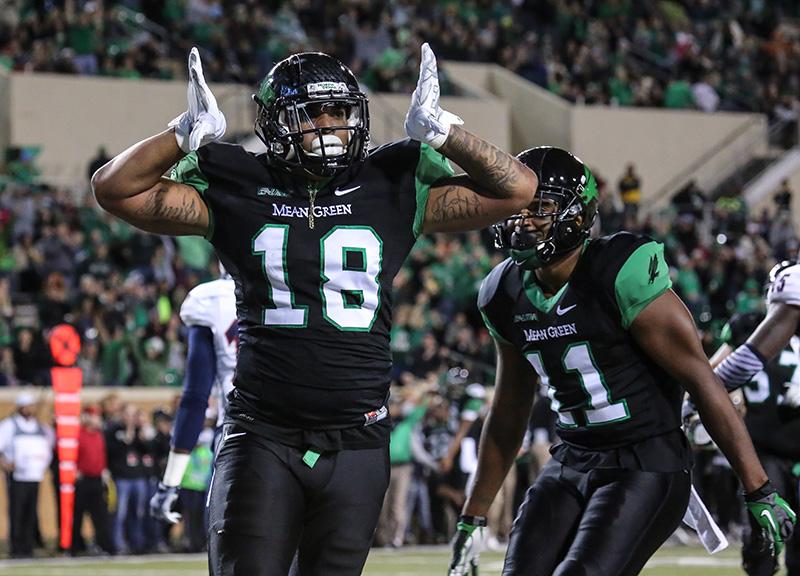 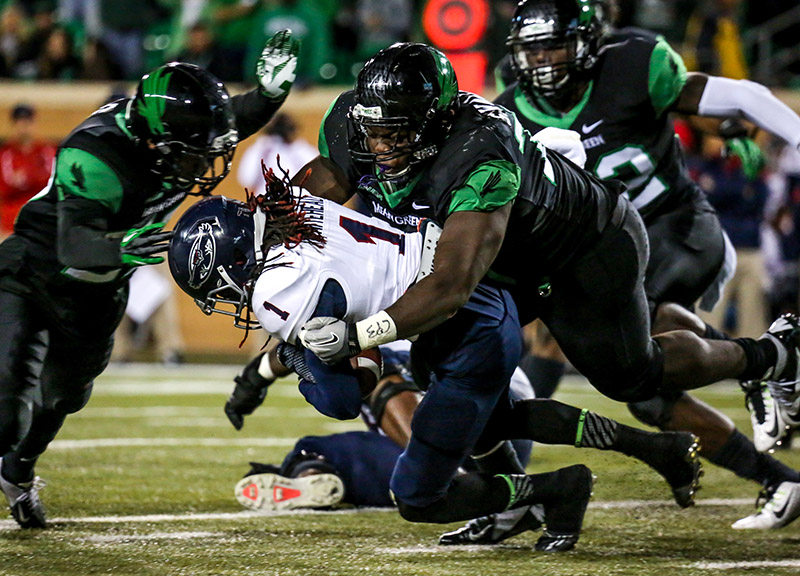 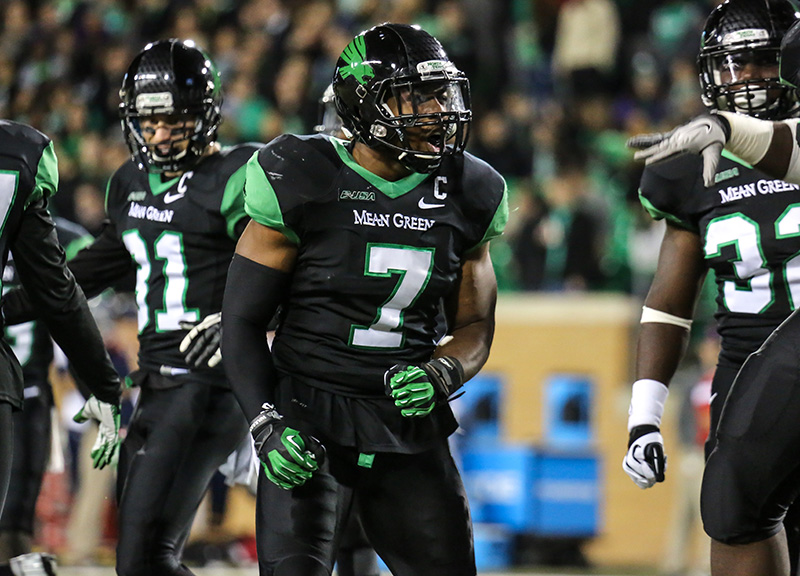 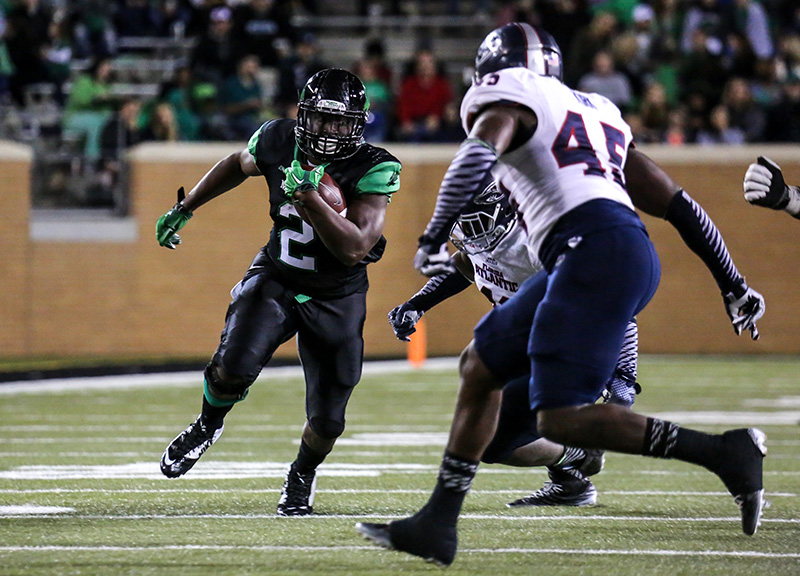 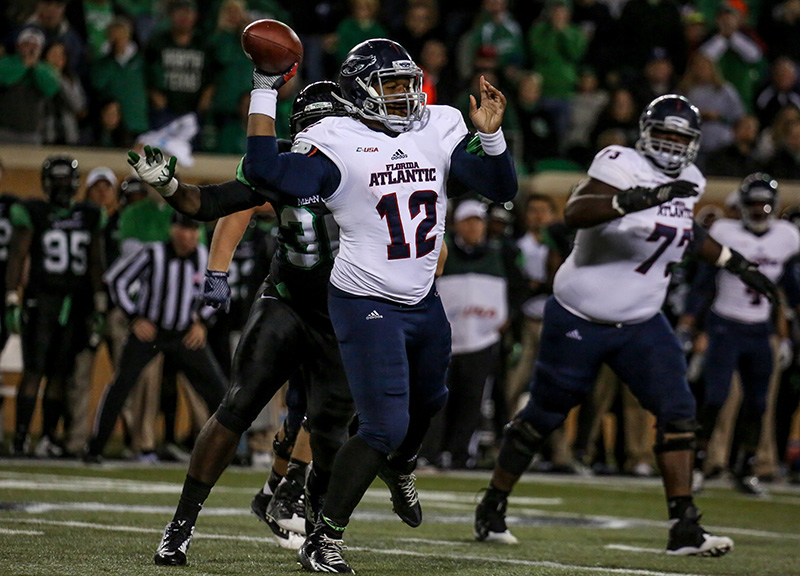 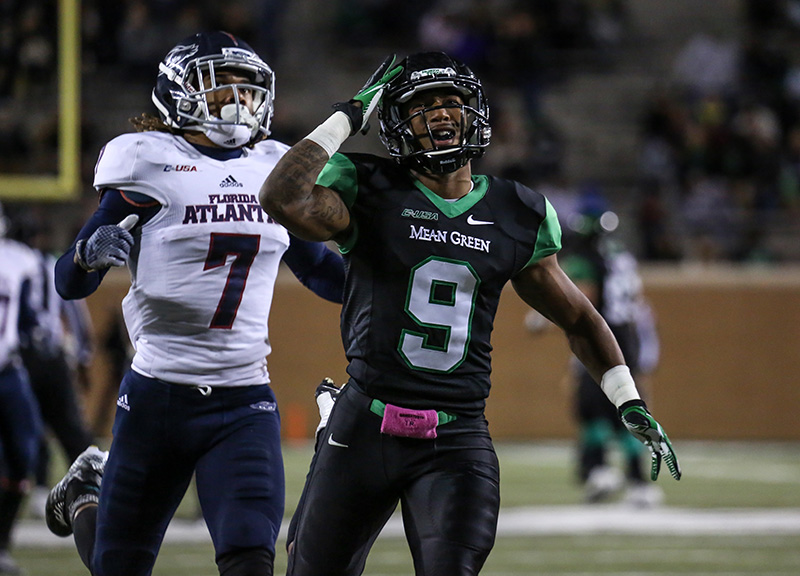 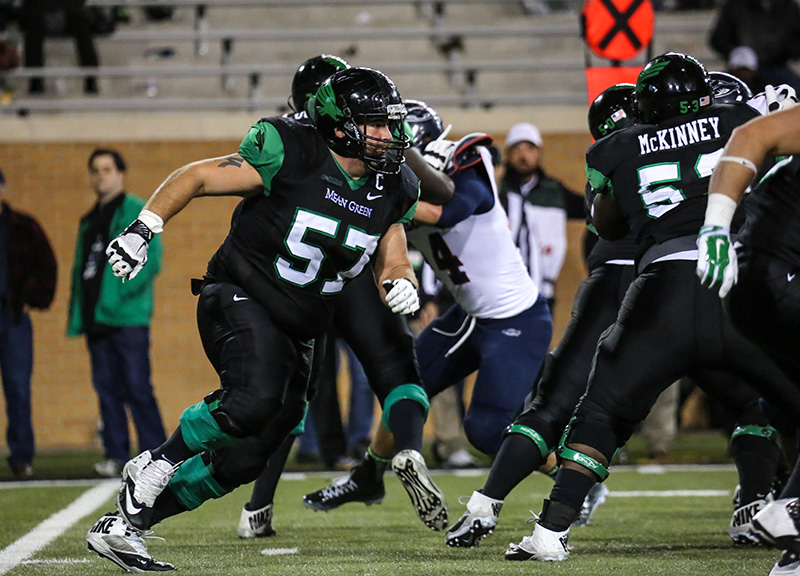 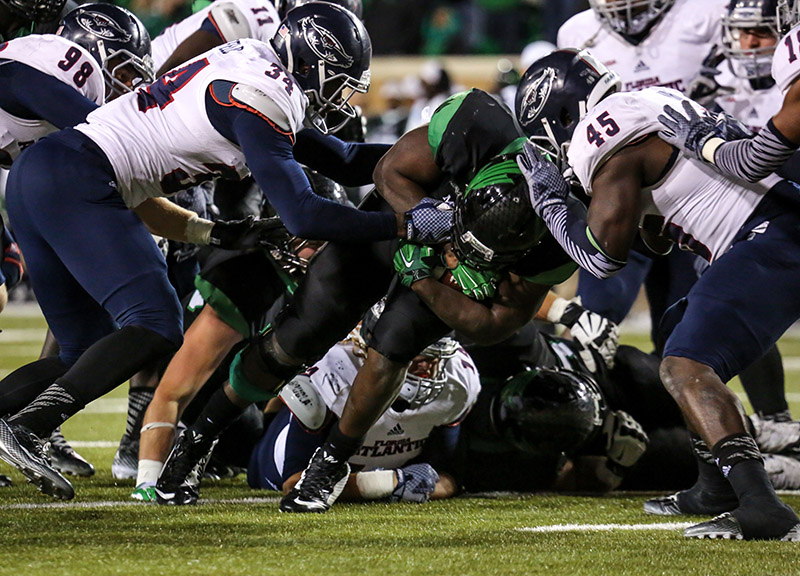 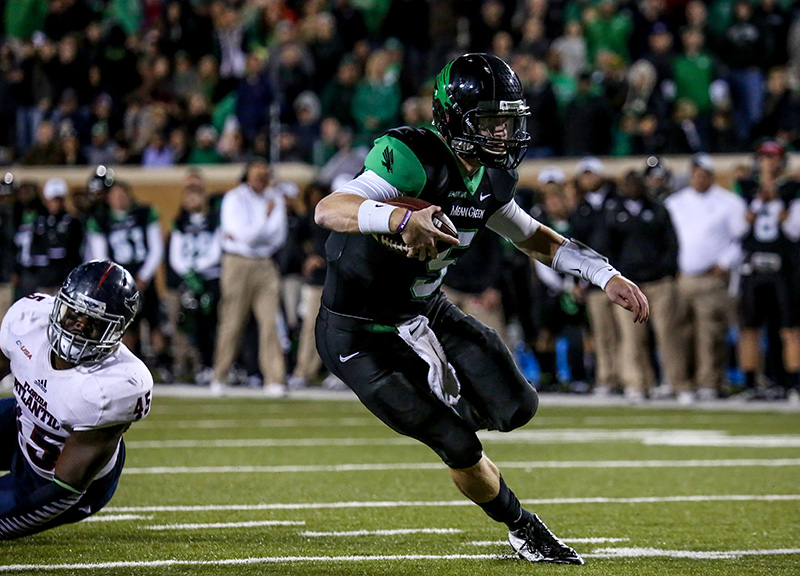 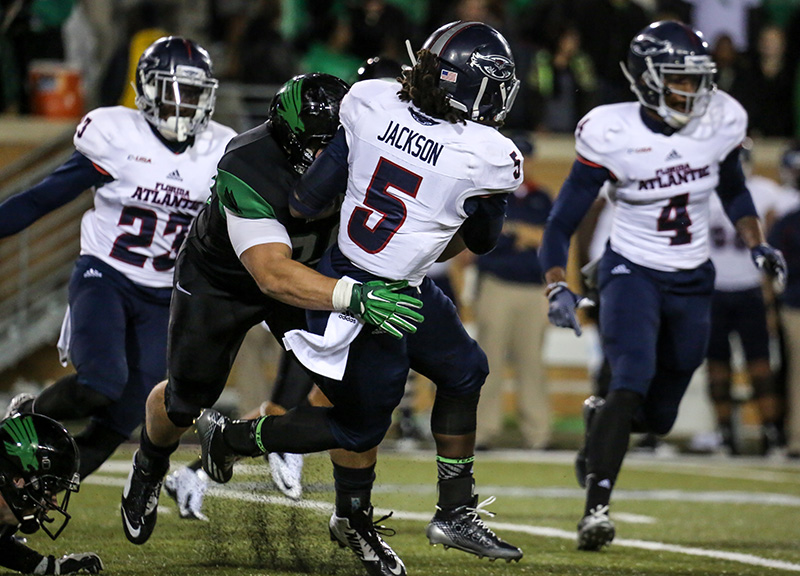 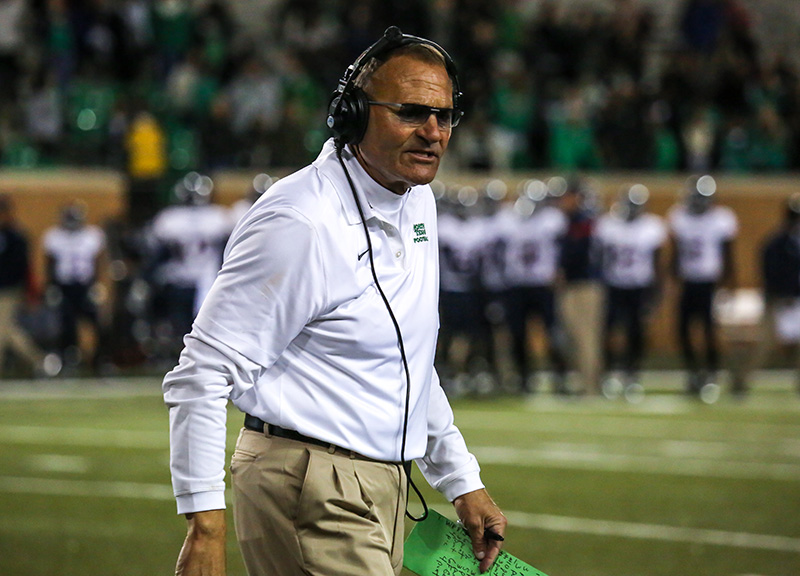 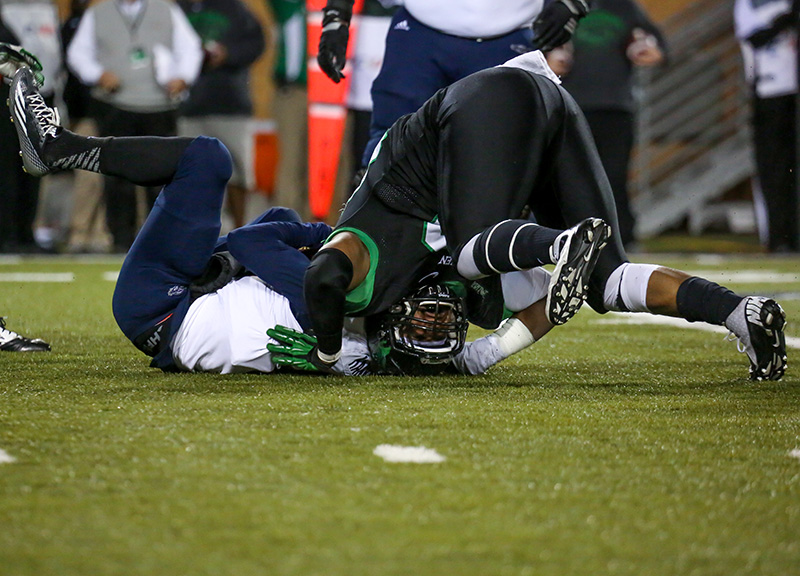 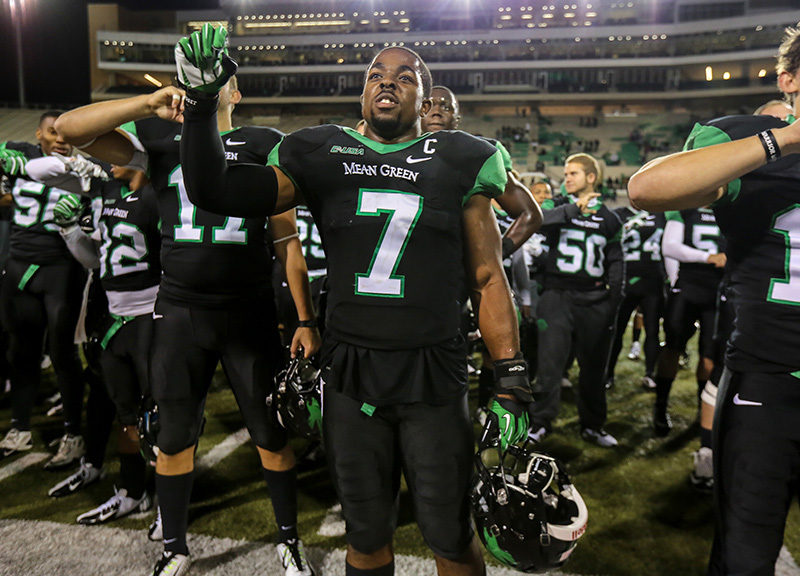