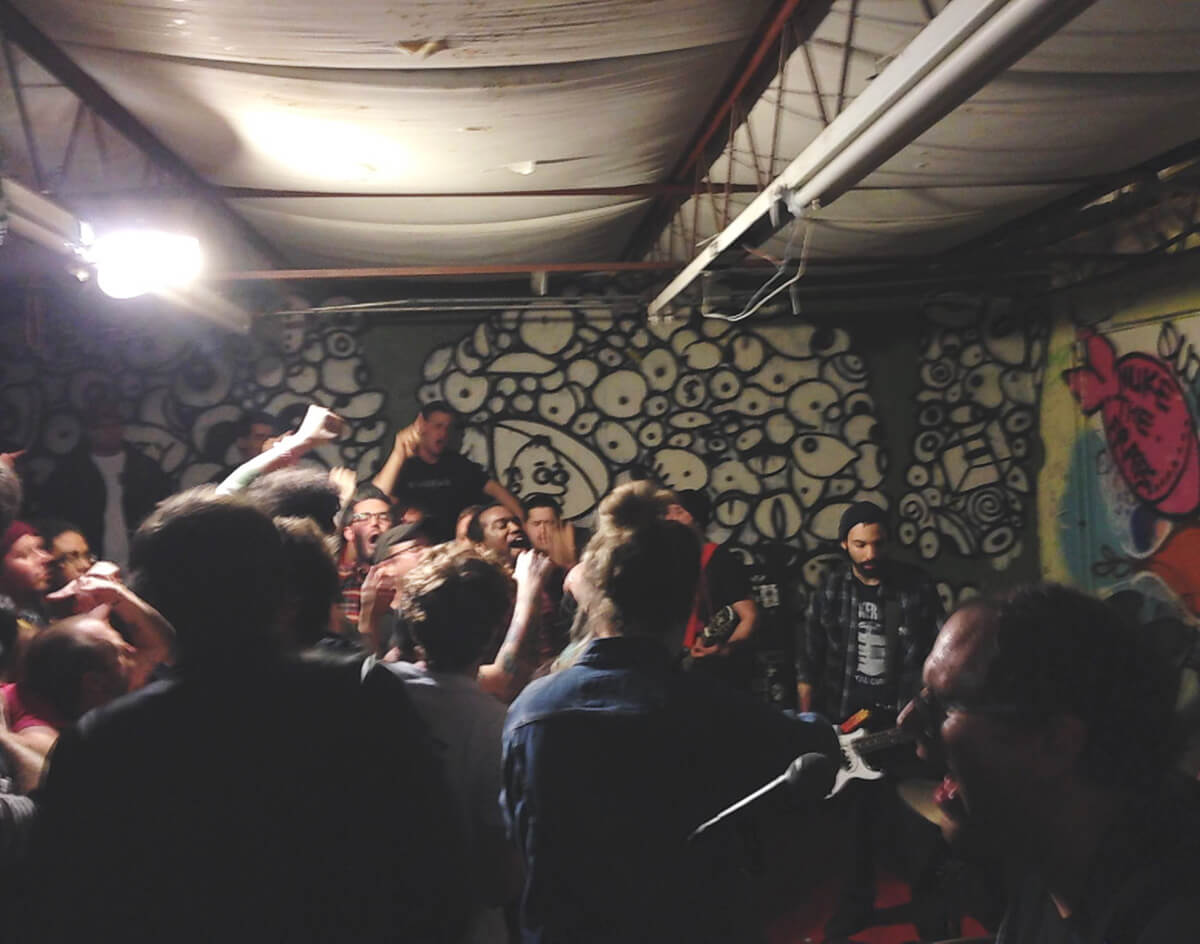 Fort Worth’s 1919 Hemphill Might Be Forced To Shut Down After Far-Right Internet Trolls Targeted It And Other DIY Spaces.

Earlier this month, the volunteers at 1919 Hemphill, the much-respected all-ages Fort Worth DIY concert and gathering space that has been in operation since 2002, received an out-of-the-blue phone call from the Fort Worth fire marshal office.

“They reached out to us because someone had reach out to them and filed a complaint,” says Christopher Kent Cotter, one of 1919 Hemphill’s 23-year-old volunteers and its de facto spokesman. “Well, not one complaint — it was actually seven complaints from seven different people in 48 hours.”

Right away, it struck Cotter as an unusual phone call, considering that he says 1919 Hemphill — a much-needed safe space for many a young creative and wayward youth throughout the region, and a spot that has helped kickstart the careers of a number of area bands — makes sure to keep up with its annual fire inspections year after year. Almost immediately, Cotter wondered if something more nefarious was at play. Turns out, he was right to be suspicious: Along with a number of other DIY spaces across the country, 1919 Hemphill’s information had been shared within a thread created by a group of far-right 4chan users who were looking to manipulate the tragedy of Oakland’s Ghost Ship fire into a way to, in their words, “crush the radical left.”

“These places are open hotbeds of liberal radicalism and degeneracy and now YOU can stop them by reporting all such places you may be or may become aware of to the authorities, specifically the local fire marshel,” the first, now-deleted 4chan post of many read. “Watch them and follow them to their hives. Infiltrate social circles, go to parties/events, record evidence and report it. We’ve got them on the run but now we must crush their nests before they can regroup!”

Concerned, Cotter and the rest of the 1919 Hemphill crew took to their own social channels to spread word that they had fallen under attack at the hands of the radical right:

Furthermore, they embarked on a fundraising campaign meant to ensure that, even in the face of past inspections, their building would be made even safer in the eyes of authorities through improvements to lighting fixtures, walls and bathrooms. Fans of the space — with its “no booze, no drugs, no jerks” motto — rushed in to help, quickly getting that campaign well past its initial request of $2,000 in donated funds.

But the attacks kept coming. Since the initial complaints were filed, the 1919 Hemphill crowd has watched on in horror as their names, phone numbers and email addresses have been spread around the internet by the 4chan trolls.

“It’s not just about the venue any more,” Cotter says. “They’re targeting us, specifically. It’s about us now. There are posts out there where people are talking about burning down some DIY venues.”

Still, Cotter and his team have kept battling to keep their doors open, even as their opponents have been laughing in the face of their plight.

“We’re gonna fight this,” Cotter told us earlier this week. “If there’s some bullshit that goes down, we’re not going to sit here and let it happen. We’re very adamant about maintaining our place and role in the community. Those fascist assholes are going to lose, and we’re going to win.”

During a phone call last night with Cotter, however, he came off as far less enthusiastic, given the most recent bad news that had come to pass. Despite earlier assurances from various City of Fort Worth employees that it wasn’t a huge deal that 1919 Hemphill’s certificate of occupancy had expired a few years ago, officials are now telling Cotter that the C.O. that he was looking to renew — one that designated 1919 Hemphill as a bookstore, given the fact that there is indeed a free library within the space — wouldn’t cover it as a place that hosted assemblies moving forward. A sign posted by a city employee yesterday to the venue’s door explains that the space now has 30 days to obtain a proper C.O. that will allow it to legally host assemblies, or else it will be fined $2,000 per day that it remains in operation beyond that deadline.

That’s a roadblock Dallas art space operators are now fairly familiar with, given the similar struggles they faced from the fire marshal throughout 2016 when it came to hosting events in galleries, lofts and warehouses around town. But Cotter, for his part, isn’t assured much by whatever camaraderie is afforded him in joining that lot.

“They got us,” Cotter said of his troll opponents over the course of that phone call last night. “We might be fucked.”

Well, maybe. A path toward 1919 Hemphill’s doors staying open remains, although Cotter fears that traversing it may not be a realistic option. For one thing, even to just establish 1919 Hemphill as a space that can host assemblies, Cotter has been told that they’ll have to establish the building as the operations base for some sort of business entity — and that the 501c3 nonprofit organization under which the building is currently operated will not suffice under Fort Worth’s city codes. They’ll also have to overhaul the building’s mechanical and electrical wiring — updates that early estimates say will cost at least $10,000 to complete.

At this point, Cotter’s not sure how he plans on proceeding, or what the future holds for 1919 Hemphill.