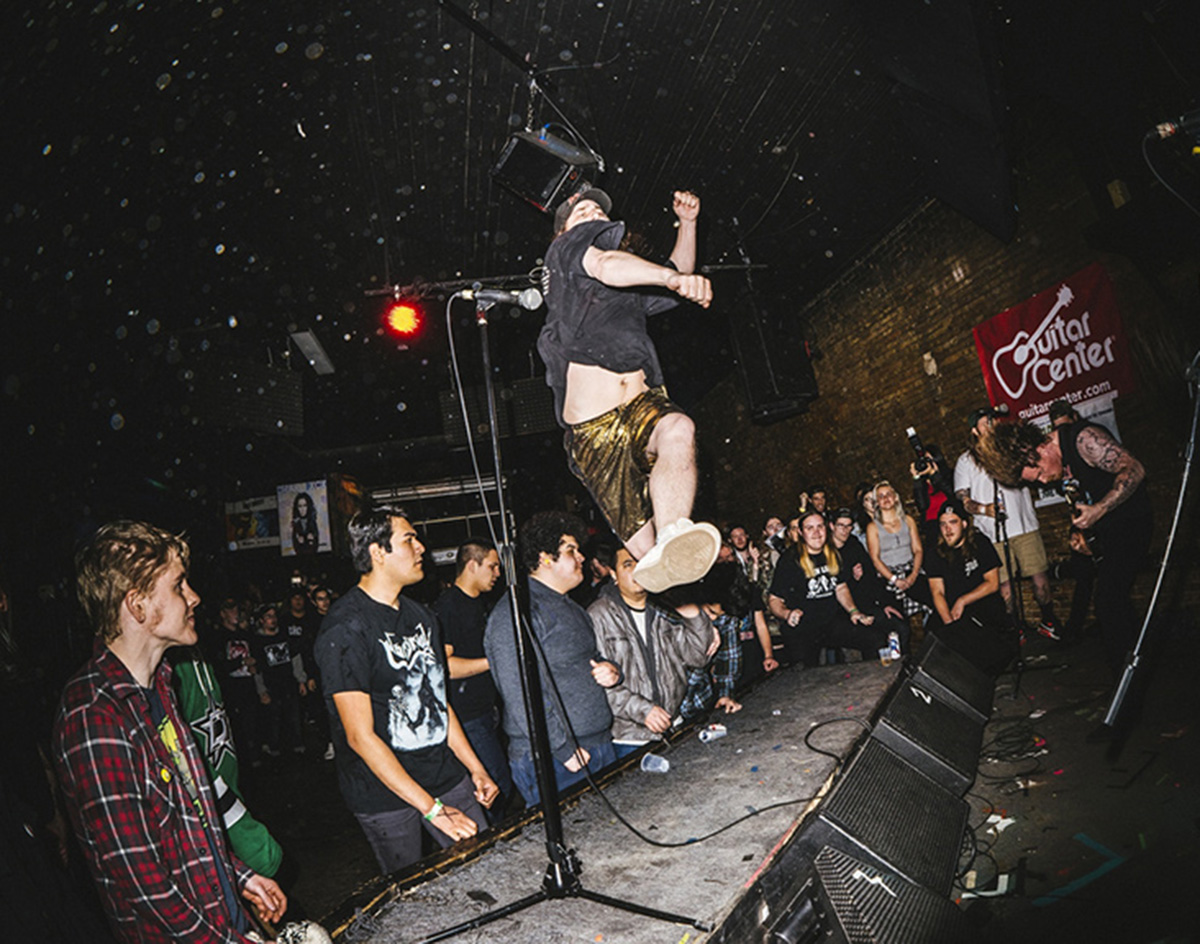 1919 Hemphill Is Under Attack, St. Vincent Tells Guitar World About Her New Album And Spillover Rebrands Yet Again.

In the wake of the recent fire at Oakland DIY venue the Ghost Ship in which 36 people were killed, a group of extreme right 4chan users calling themselves the “Right Wing Safety Squad” have been calling fire departments across the country to complain about DIY venues in the hopes of getting them shut down. These trolls refer to such spots as “hotbeds of liberal radicalism and degeneracy,” and encourage their cohorts to “watch [liberal activists] and follow them into their hives.”

Locally, these extremists have set their sights on Fort Worth DIY space 1919 Hemphill, one of North Texas’ oldest and most prominent all-ages spaces. A number of calls to the local authorities have put the “volunteer-run, not-for-profit, inclusive community safe space” on the hot seat. In response, the venue’s been making all manner of repairs and getting its paperwork in order so that it’ll be able to pass even the most rigorous city inspection.

“We’re gonna fight this,” says 1919 co-operator Christopher Kent Cotter. “If there’s some bullshit that goes down, we’re not going to sit here and let it happen. We’re very adamant about maintaining our place and role in the community. Those fascist assholes are going to lose, and we’re going to win.”

They’ve been raising money to pay for the aforementioned upgrades and paperwork filings online, and donations can be made here.

All this comes just days as former Dentonite and Shiny Around the Edges frontman Michael Seman gave an in-depth interview on the subject to the Denver’s Westword. With a doctorate in urban planning and public policy, Seman had many fascinating insights on the potential value DIY spaces can add to a community.

“Having these spaces on your radar as a city and being able to step in is important — these aren’t a nuisance,” he says. “They are the building blocks of your entire creative economy.”

At the opposite end of the spectrum, Fort Worth’s least DIY venue — Billy Bob’s — is set to host Kacey Musgraves’ Christmas show tomorrow night. Ahead of that performance, Musgraves gave Billboard a behind-the-scenes look at how her recent Christmas album was made, including what it was like to work with album collaborator Leon Bridges.

“His voice is like velvet,” Musgraves says. “I mean, every take we were just like dying in the control room. It was very hard to pick exactly which take we wanted, because they were all great.”

Hey, maybe like he did with Nick Waterhouse last week, Leon will show up unannounced to help Musgraves perform their duet live? Maybe!

Another badass expat with an interview in a national magazine this week is postmodern guitar hero St. Vincent, who is the current Guitar World cover girl. There are a couple of cool things about that, too. First, on the cover, she wears a kitschy bikini print T-shirt to call out the magazine’s misogynistic past. What a total badass.

“I did a quick Google search of women on the cover, and all I really saw was girls in bikinis holding guitars like they’ve never held a guitar before,” she says. “I started thinking about that and just wanted to make my own absurdist comment on it. I couldn’t really let it slide without poking a bit of fun and taking the piss a little!”

The other big reveal in the piece is that she’s got a new album due out in the spring — one that she describes as a “real sea change” in her sound, due to the fact that, for the first time in 10 years, she took a break from the tour-record-tour lifestyle.

“I think it’ll be the deepest, boldest work I’ve ever done,” she says. “I feel the playing field is really open for creative people to do whatever you want, and that risk will be rewarded—especially now that we have such high stakes from a political and geo-political standpoint. The personal is political and therefore the political can’t help but influence the art. And only music that has something pretty real to say is gonna cut the mustard.”

Another thing that’s not going to cut the mustard is the Spillover name. After four years of throwing post-SXSW fests under that name (plus another three before that as Bro Fest, plus another as South by South Flesh) Parade of Flesh’s annual spillover event is changing names again, rebranding for its 10th go-round as Not So Fun WKND.

As for why he chose the new name and ditched the old one, Parade of Flesh head John Iskander tells us the following: “It wasn’t fun. It’s a goddamn headache. And I’m done with the word ‘fest.’ The minute you put the word ‘fest’ on it, you need to charge $80 or $90.”

As such, while this year’s various shows at Three Links, Trees and Dada this March 17-19 will all exist under the #NSFWKND banner, tickets to them will all be sold separately, with prices ranging from $10 to $25 per show, right here. The first round of confirmed performers is pretty solid, though, including Thou and Aseethe, Temples, Night Beats, Deap Vally, Froth, JJUUJJUU, The Drums, Chastity Belt, Weaves, Downtown Boys, Priests, Flasher, Wand, Splashh, Chain of Flowers and Har Mar Superstar.

Meanwhile, Third String Productions‘ own March fest, the spring version of its So What?! Music Festival, is indeed hanging onto that “fest” branding. But it too is adding some changes to its March 24-26. Inspired by the new model of its fall entity, this year’s version will include a night of shows in Deep Ellum venues on Friday night before moving back to its usual home at QuikTrip Park in Grand Prairie for its Saturday and Sunday offering. The Deep Ellum shows have yet to be announced, but the weekend offerings are solid if right up the expected alley for this deal, featuring sets from Mayday Parade, We The Kings, I See Stars, Knuckle Puck, Dance Gavin Dance, Escape The Fate, Every Time I Die, Set Your Goals, Four Year Strong and The Story So Far. Local hardcore/thrash heroes Power Trip are also on the bill, as are reunions from Dallas pop-punk acts Forever The Sickest Kids and Kid Liberty. Tickets and more lineup reveals can be found here.

In some other cool news, 19-year-old producer VohnBeatz earned this week his first Gold record for his work on Lecrae’s Anomaly album, which has now moved over 500,000 copies.

First up is this new Champs Sports and Adidas spot that sees Cowboys QB Rayne Dakota Prescott cruising through Deep Ellum and hanging out in the control room of Ferralog Recording Studios with “Panda” rapper Desiigner, of all people.

Next up is this clip from Ryan Hamilton and his new backing band The Traitors. The lyric video for “We Never Should Have Moved to L.A.” is the first single from their Devil’s in the Detail LP, which is due out February 14.

Next up, our 77th favorite song of 2016 (read: Rei Clone’s “Ready to Die”) got the video treatment this week! Their clip notably starts out with clips of promoter Jeff Brown getting brown gravy poured on his head at a recent charity fundraiser his King Camel brand recently threw.

Also, the group behind our 23rd favorite song of the year (read: Jesus Chris + the Beetles) has a new live clip out previewing a ballad from their next record that’s “coming out eventually.”

Elsewhere, local heroes Sly Stone and Charley Pride are being honored with lifetime achievement Grammy awards; a blogger put together an informative chart of the Marked Men’s various spinoff and side projects; and Maren Morris revealed to Chelsea Handler on a recent episode of her Netflix show that “it’s so liberating is when you realize no one knows what they’re doing.”

Cover photo of Power Trip performing at Spillover ’16 by Karlo X. Ramos. Got a tip for White Noise? Email us!