Dead For A Day. 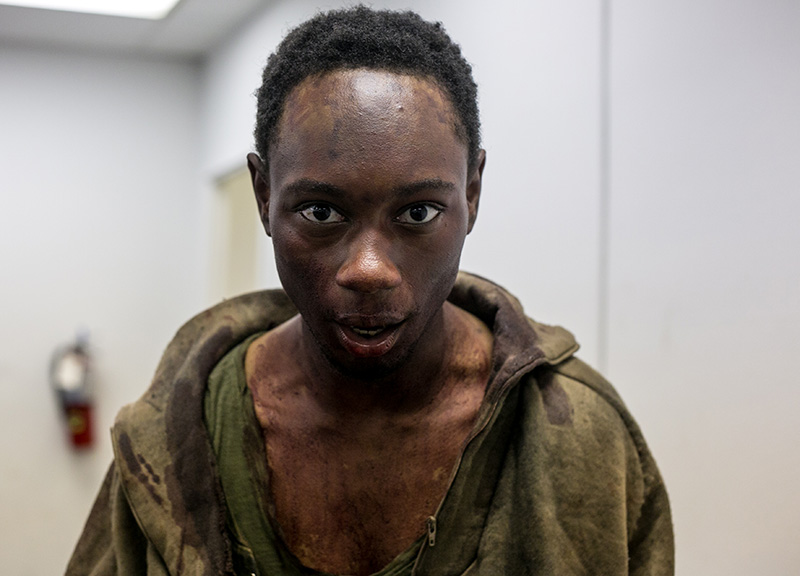 I Was An Undead Extra In A Zombie Movie.

It was hotter than the special section of Hell entrusted to Adolf Hitler when I walked into the the Dallas Municipal Building on 106 South Harwood Street in Downtown Dallas.

This is a landmark — the place where Lee Harvey Oswald was jailed, screamed “I’m a patsy” and was subsequently shot and killed. Upon entering the building, I see a guard and a metal detector. I start to wonder if I’m actually in the right place.

I’m supposed to be here as an extra in a zombie movie. Where exactly is the extras coordinator, Ashley? Where’s the rest of the crew? The craft services table? The sunglasses-indoors talent?

“Is there a movie or something that’s being filmed here?” I ask the guard as coyly as possible.

He says yes, unclings a rope blocking off a staircase and tells me to head up.

I’m equal parts excited and nervous. It’s time to make my motion picture debut. What will I say when I accept my Academy Award? 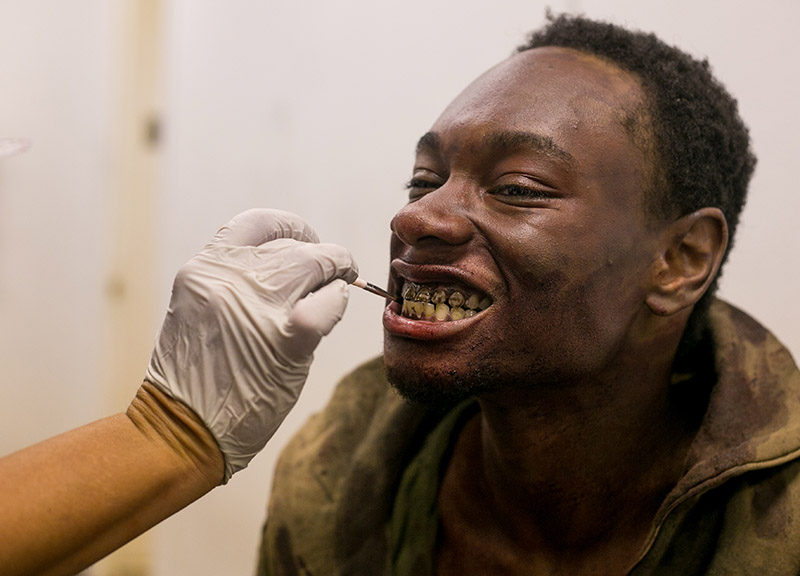 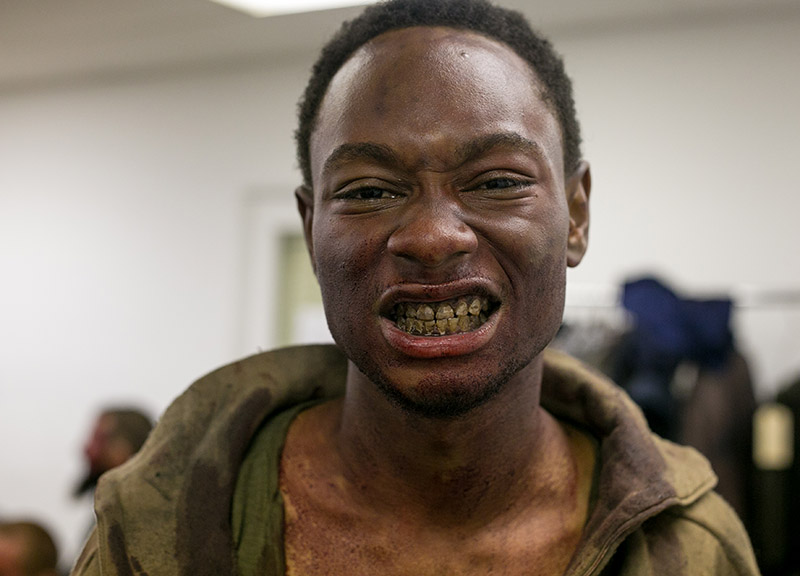 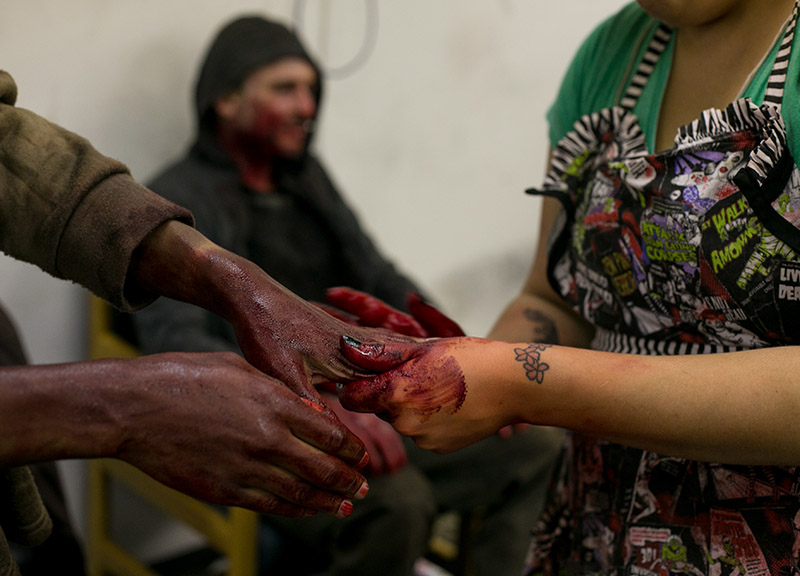 * * * * *
The movie in question is called Daylight’s End and IMDB’s plot summary goes as so: “Years after a mysterious plague has devastated the planet and turned most of humanity into blood-hungry creatures, a rogue drifter on a vengeful hunt stumbles across a band of survivors in an abandoned police station and reluctantly agrees to try to help them defend themselves and escape to the sanctuary they so desperately need.”

It also stars a number of professional MMA fighters.

The extras’ green room room is packed with roughly 20 of us. Most here found out about this gig through Craigslist. When I arrive, most are already in full blood-hungry creature garb — fake blood, rotting teeth and all.

I track down the costume designer and begin the first step of my own transformation. I’m taken over to a rack brimming with dingy, fake blood-stained clothes and get handed three items: a two-sizes-too-big sweater; a cleavage-ready, swoop-neck women’s shirt; and a bedazzled women’s henley. They each exude an unfamiliar odor. It’s not the best of smells. I suspect it is just zombie sweat or whatever.

Either way, it’s not going to be my best sartorial moment.

In the changing room, Nick, a fellow extra who’d been on set the day prior too, tells me what to expect from my day.

“They film you runnin’ around and shit, actin’ like a damn fool.” 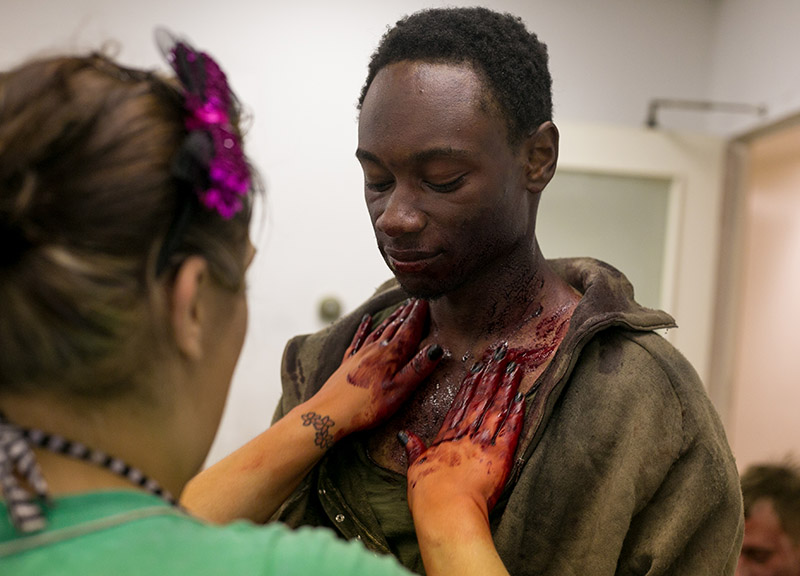 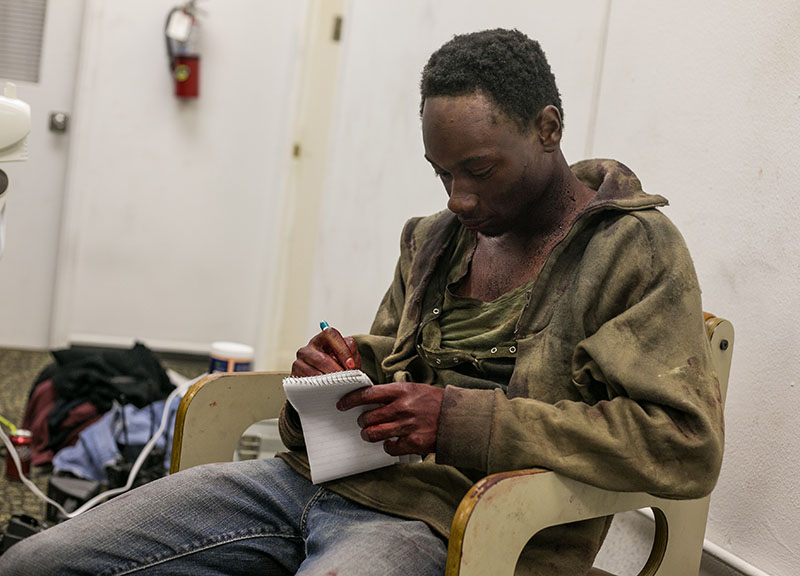 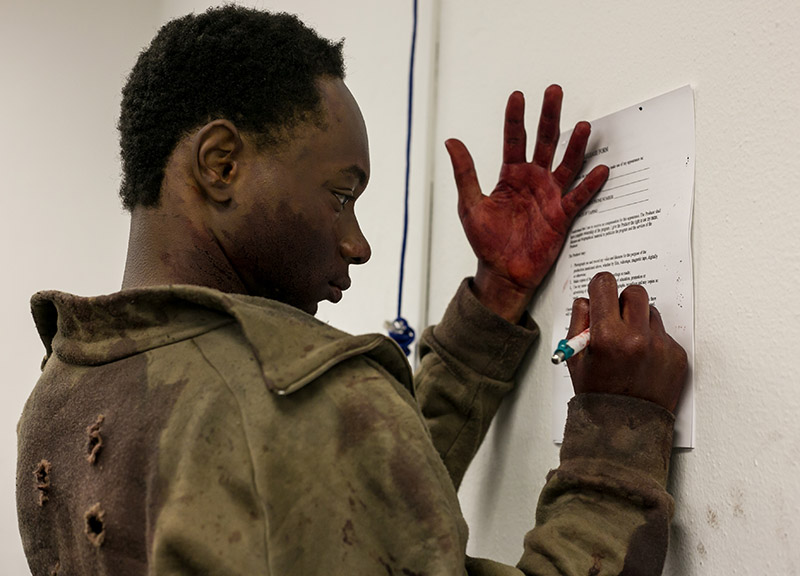 * * * * *
His description is spot on. Save for a short scene we film that features some fake gunshots, we most just run from Point A to Point B.

Still, there’s definitely an art to being a zombie.

It starts with the make-up process, which kind of sucks. These are your first-world problems: sticky blood that feels like it will never vacate your facial hair follicles; a “dead dental palate” that burns and tastes like alcohol when it’s swabbed along your teeth.

Certainly more important, though, is your movement.

In an abandoned part of the building, second unit director James explains how it works. He gives pristine direction. We’re not just supposed to run; we’re to growl and slobber up and down stairs, too. He’s fairly specific about what he wants. At one point, some fellow extras — parkour expects in their spare time — start doing some wild shit. They jump on walls, they do flips. It’s all horribly un-zombie like, and James has none of it. Still, he let’s them down easy enough, simply telling them to turn thing down a notch or maybe four.

James knows what he’s doing. In another life, he was a marine. He’s been to war.

This is child’s play for him. He has no problem getting the shots he wants. 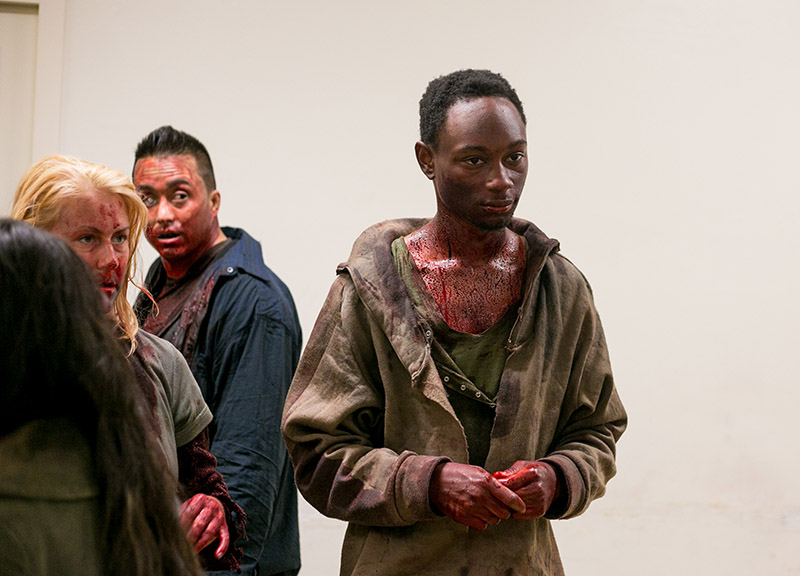 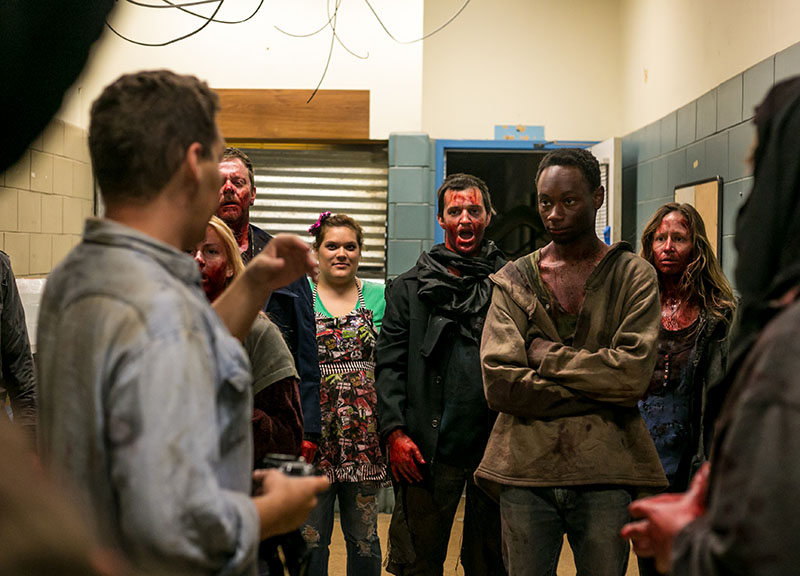 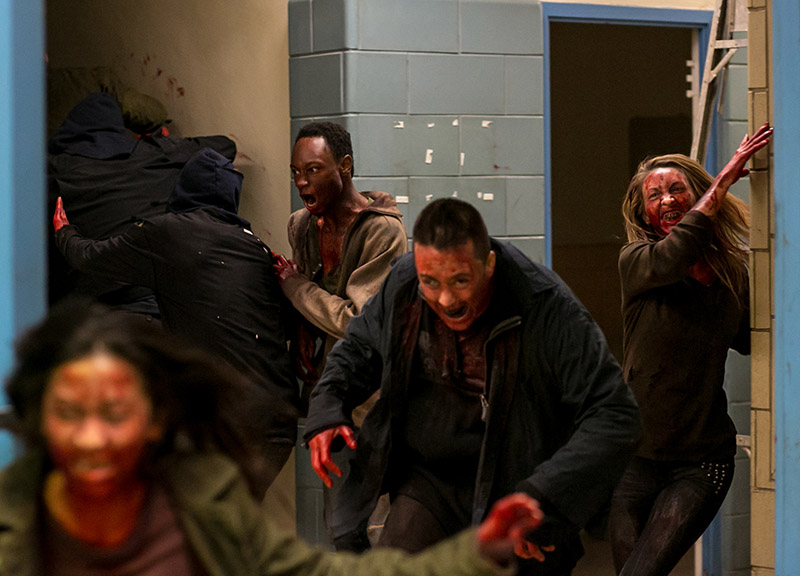 I leave the building, pop on my head phones, turn on some Drake and step out into the real world. I’m wearing my own clothes, but candy blood still sticks to my face and chest. Upon closer inspection, I find that the blood’s actually seeping through my T-shirt. The rotten effects are still painted onto my teeth, too; I couldn’t wipe those off in the bathroom.

I embrace it. I smile ear to ear, act overly gregarious and hope to scare the living shit out of the people I pass on the street.

But, walking along the streets of Downtown Dallas, nobody even pays me any mind. Not one bit.

I start to wonder if maybe I’d been too harsh on the clothes the filmmakers had asked me to wear back on set. Maybe they knew what they were doing with those, too.

After all, in that building, in those clothes, with that makeup, I did kind of look like a zombie. Out here, in my own clothes, wearing the same makeup? I looked like something else entirely.

I guess I just looked homeless. 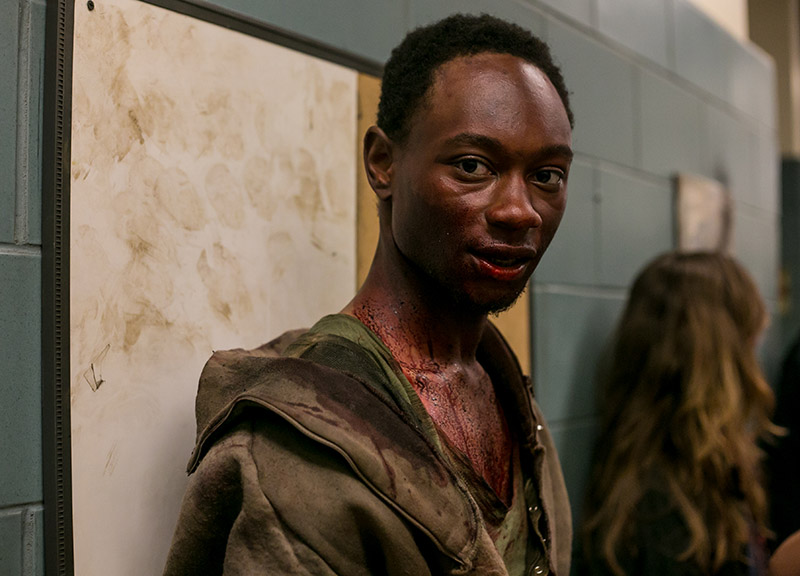 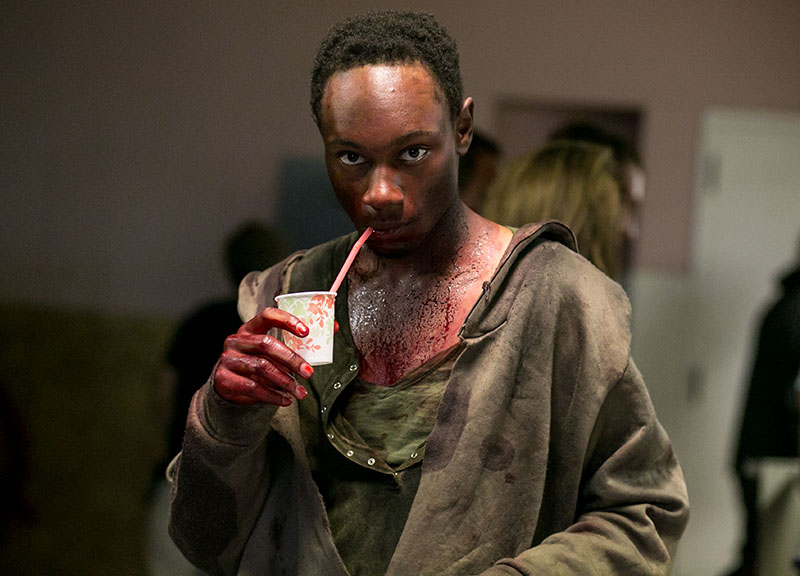 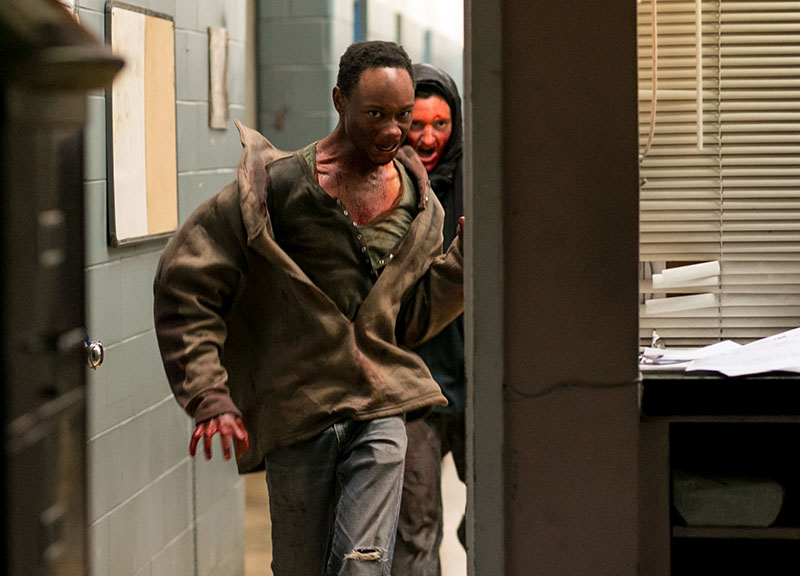 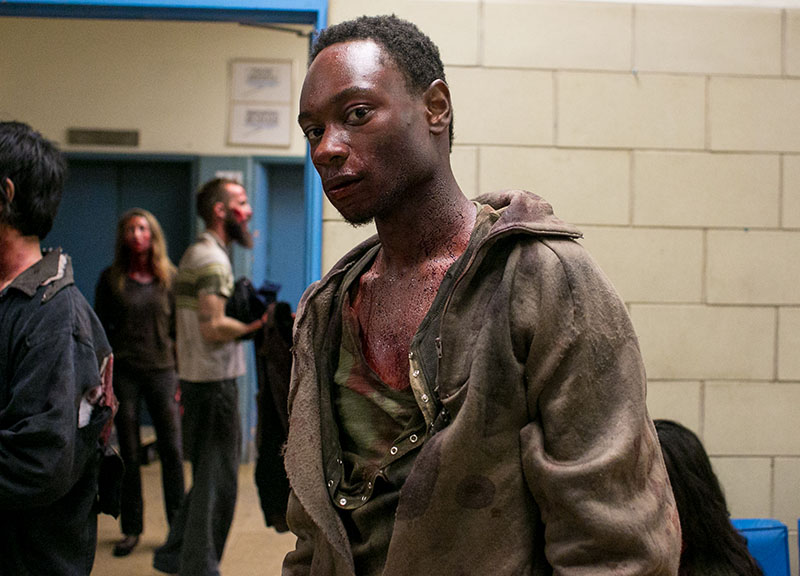