Dallas’ Most Iconic Christmas Eve Party Is No More. 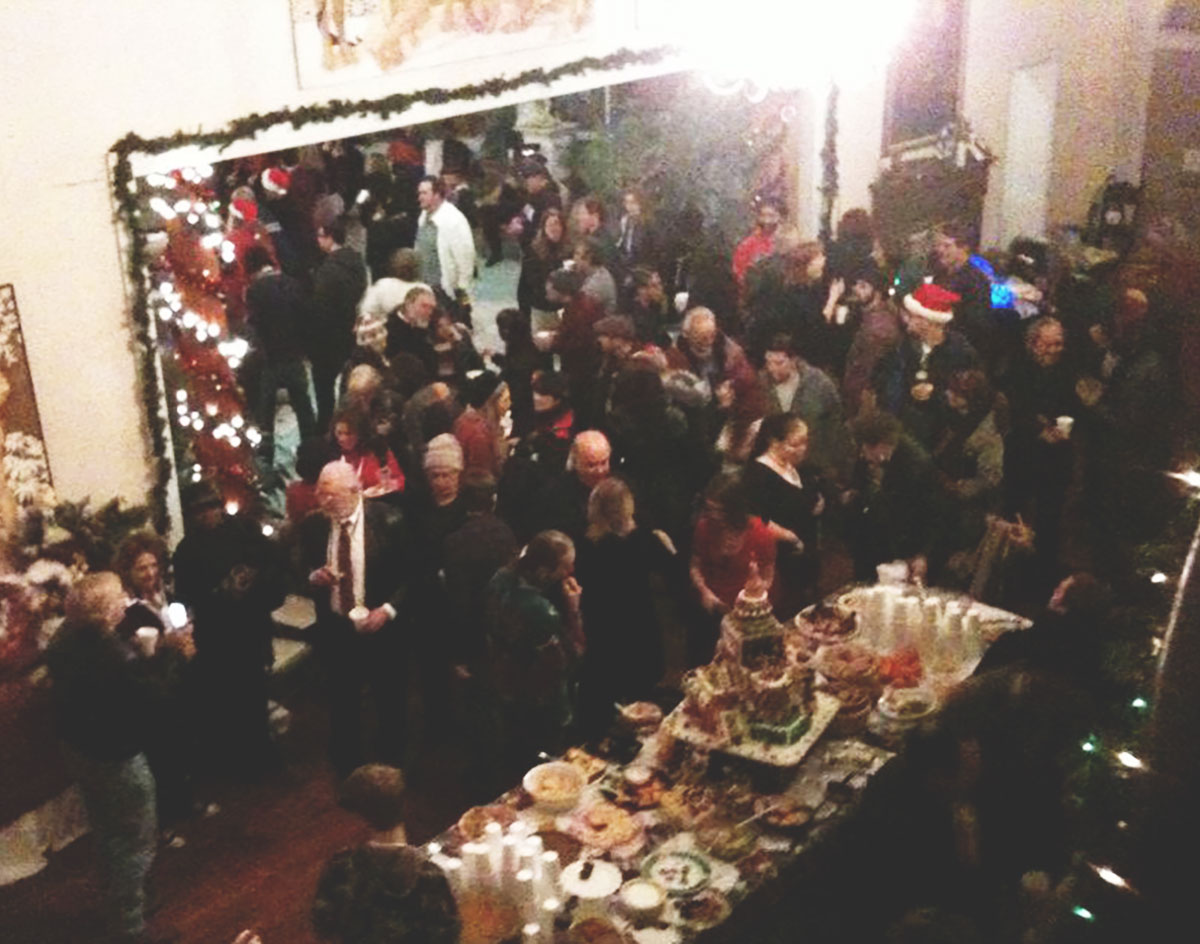 John Ashley Bellamy Passed Earlier This Month, Putting His Moon Mansion’s Future In Jeopardy And Closing The Book On One Of Dallas’ Great Annual Events.

For more than 40 years, Dallas’ hippest creatives and scenesters have flocked to the East Dallas enclave known as the Moon Mansion each Christmas Eve — and, just as important, the residents of this former Methodist Episcopal Church built in 1905 have without question warmly welcomed these guests into their magical and festive scene filled with sing-alongs, libations and a bevy of kindred spirits.

Unfortunately, though, it seems this cherished and longstanding Dallas tradition has now arrived at its end.

Earlier this month, John Ashley Bellamy, the Moon Mansion’s steward of 48 years and the visionary behind this iconic annual bash, passed away due to complications relating to Alzheimer’s Disease.

The fate that awaits this most revered of Bellamy’s handful of quirky Dallas properties remains uncertain — after years of fighting encroaching development, and seeking a historic overlay designation for the building, its ownership was transferred to a trust in July. It has been largely accepted at this point, especially in light of the ongoing coronavirus pandemic, that his passing signals the end of his legendary annual Christmas Eve shindig.

Unlike so many other cultural touchstones Dallas lost in 2020, the loss of the Moon Mansion’s annual Christmas Eve party — called “Fezziwig” as a nod to the jovial character immortalized in Charles Dickens’ A Christmas Carol — might at first blush seem like a trivial loss. Not so, however, to those who once lived in the “swank” space (among them members of Dallas’ seminal rock outfit Edie Brickell & The New Bohemians) and/or those who made it a point to repeatedly attend the building’s Christmas Eve celebrations year after year.

In its own retrospective of the now-bygone yearly attraction, the Lakewood Advocate recounted that annual scene: “Local musicians provided piano accompaniment to the familiar songs. A giant, live fir tree dependably showered guests with rays of multicolored Christmas lights. Gingerbread houses and all manner of treats topped a rectory-sized table. Attire was anything goes. Guests arrived in elegant velvets or utilitarian puff vests. Hand-crafted hats of Christmas tinsel, Elizabethan gowns and costumes sparkling with sequins brought more smiles and gaiety.”

Lauded as far back as 1981 by D Magazine as a celebrated Dallas party destination, Bellamy maintained the Moon Mansion’s stalwart reputation among Dallas’ hippest until his passing — thanks in large part to his Fezziwig event’s enduring fame.

“My Dad lived next door to the Moon Mansion for almost 20 years, and I remember the first Christmas Eve that I heard that drum circle,” East Dallas scene elder Monique Roberts recalls. “I had no idea where it was coming from. Then one of my friends called me and said, ‘Why aren’t you at the Moon Mansion? It’s next door to your Dad’s place.’ I had no idea what they were talking about, but I followed their directions… and walked through that nondescript, kinda rickety side gate into what my mind had always envisioned Christmas parties to be like. It was everything, and it seemed like everyone I knew had convened in this one place. I can’t describe the magic of seeing this old church painted and decked out for the holidays.”

Dallas musician Poppy Xander saw another side of the event’s appeal as one of its regular performers and lead carolers in recent years.

“Mr. Ashley was an archetype of Christmas spirit,” she says. “The Moon Mansion was like something out of a late classical dream. He opened his home and his vision of communal celebration to everyone on Christmas Eve and that’s what made it so special. So many people were a part of it over the decades. Being able to play the piano and help lead the adventure of Christmas caroling, which is really what the party was about, I felt like I got to embody that Christmas spirit as well. Without the Moon Mansion, Mr. Ashley, his lovely family, and his open door, I wouldn’t have ever known what Christmas was about.”

Past Moon Mansion resident and veteran Dallas bartender Khurk Maeder, who says he spent almost 20 years of adult life living in various East Dallas multiplexes Bellamy owned, echoes the sentiment that there was something uniquely special about those Christmas Eve affairs.

“There would be parties in everyone’s apartments that would coincide with the Christmas Eve party, so it always continued on after the main party was over,” Maeder says. “You never knew who was going to show up — older folks who knew Ashley and the family, people who rented and lived there, famous musicians, supermodels. People from all walks of life: Punk rockers, hippies, corporates, gutter-punks, musicians, artists, millionaires. It didn’t matter. We all came together and celebrated Christmas Eve. Hell, even the atheists were singing Christmas carols! It just seemed right.”

Revered as those parties were, though, Maeder emphasizes that Bellamy’s passing means far more than the loss of another anticipated event on the Dallas’ social calendar, albeit one that uniquely appealed to a multitude of disparate scenes. Bellamy’s consistent and continued support of the young creatives he provided affordable living spaces to will also be sorely missed, Maeder says.

“I feel like I grew up and became a man while living at his places,” he says. “It really had a profound affect on my life. [Ashley] took care of people, regardless of their pasts. He believed in people.”

Christmas or no, it’s an admirable legacy Bellamy leaves behind — and Dallas at large would do well to do all it can to maintain it.