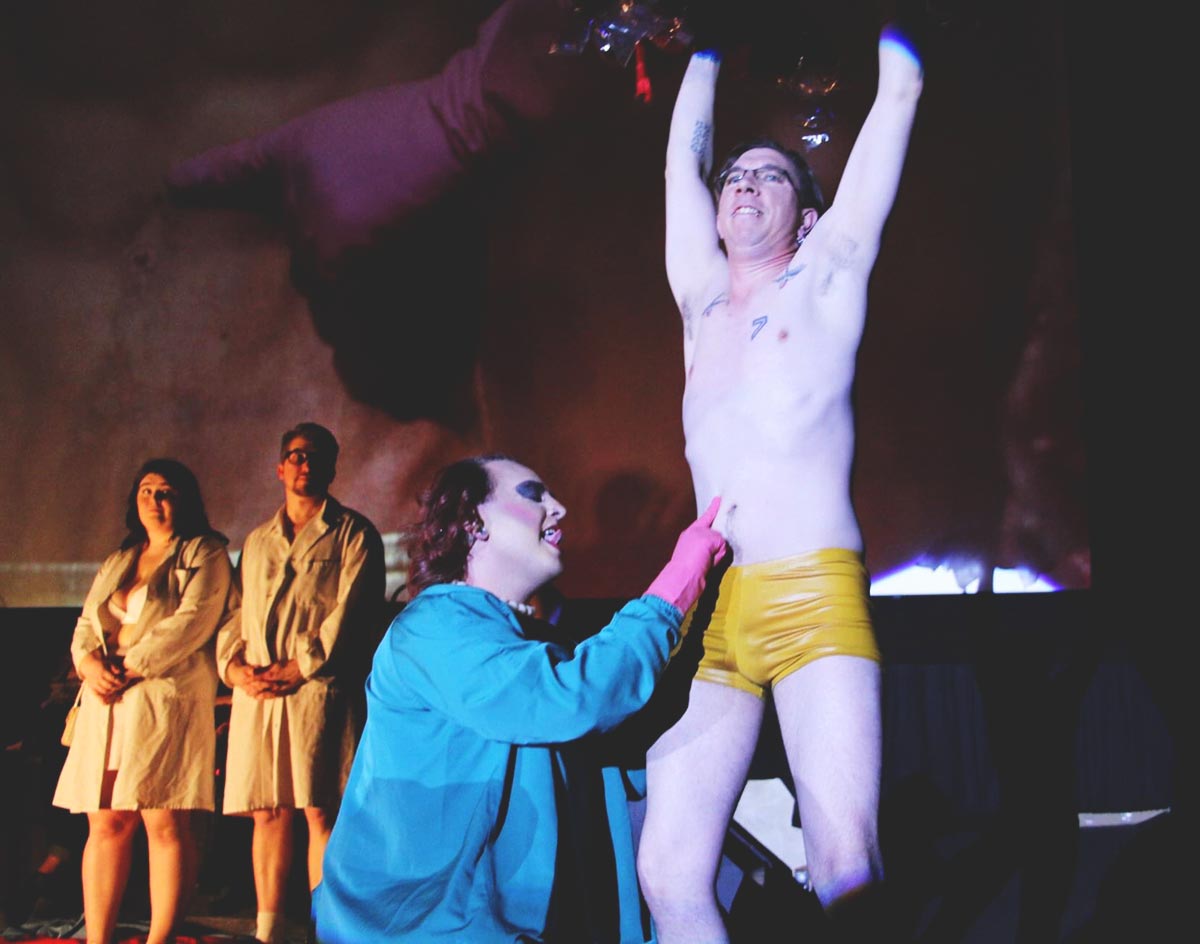 A Look Into The Comeback Of The Most Beloved ‘Rocky Horror Picture Show’ Shadow Cast In North Texas — And How They Handled Their Pandemic Hiatus.

There are few things in the world more magical than watching a Rocky Horror shadow cast at play.

You’re in a dark theater full of half-naked strangers who are spraying water guns into the air, all of them screaming dirty jokes at the screen and chucking toilet paper across the aisles.

It’s absolutely the wrong way to act at the movies, but it feels so right.

The history of cult classic movie musical, The Rocky Horror Picture Show, is a vast one that spans since 1975, the year of its release. It’s one of those films that’s so uniquely itself that no other has gotten even close to matching its spirit.

One of the reasons why Rocky Horror has kept its iconic status throughout the decades is its shadow casts — the superfans who recreate the costumes and set pieces from the film, then act out the movie in front of the theater screens. These shadow casts bring whole new interactive life to the musical: There’s props to throw, callback lines to yell and, of course, attendees are always encouraged to be in costume.

North Texas has its very own long-running Rocky shadow cast called Los Bastardos, which has been doing the Time Warp around Dallas-Fort Worth since 1998 — until this past year, when the still-ongoing COVID-19 pandemic ground their efforts to a half. For an ever-evolving community that’s been serving packed theaters for over 20 years, it’s been a very jarring thing to suddenly cease performing.

The last Los Bastardos performance before their involuntary hiatus came in late February of 2020. Now, though, the unconventional conventionalists are making their long-awaited return to the stage on Saturday, September 4, at the Ridglea Theater in Fort Worth, one of their staple venues.

“Most of us are getting chubbier,” cracks Madame Leah, who corrals the Transylvanians as the cast’s director, when asked about what her team has been up to during the pandemic. “There is not one of us that isn’t like, ‘Oh, we need to make sure all of our costumes fit.'”

At the start of lockdowns, the cast started off having virtual meetings on platforms like Discord, but soon realized a break was actually appropriate, considering the severity of the world’s situation.

“Once it got really, really crazy, we were like, ‘OK, we’re just going to sit back for a while,'” Leah says. “We realized that it was going to go on a lot longer than we thought.”

With rehearsals put on pause, Leah had time to check things off her to-do list for the show — things like getting new costumes and tending to a “never ending” batch of prop repairs, including the huge rainbow tank in which the titular Rocky Horror is created. No pandemi-fied shows were held during the cast’s 18 month-long break, except for a single socially-distanced, drive-in show. During the time away, the cast took some time to reflect, while still maintaining online chats with each other. They’re a tight-knit group, after all.

“When everybody started getting vaccinated, we were like, ‘Oh my god, I miss you so much!’ and we started making plans,” Leah says.

With their return to theaters fast arriving, the group has several live full rehearsals under their belt, with additional smaller break-out ones held out of caution due to the Delta variant. In these efforts, Leah says, the passionate cast proved to be anything but rusty. No members quit during the hiatus, and many even had improved attitudes, says Leah. It helps, she notes, that she’s been sending out an itinerary before rehearsals, letting cast members know who should bring their A-game — or else, as she puts it, she’ll “chew their faces off.”

“We got in there, did a couple of really solid runs, and I didn’t see any weak performers or weak spots, so that was really exciting to me,” Leah says. “Of course, training new people will always be a thing, but as far as our seasoned performers who were there before the pandemic days, they’re going ‘We’re ready… if we can squish into our little costumes.'”

As part of their return, Los Bastardos will be following the current CDC guidelines and adjusting their set up as necessary. Their September 4 show at the Ridglea will be held at 50 percent capacity, with masks encouraged for attendees and required for theater staff.

Beyond that show, the group for a time had as many as eight additional dates on their calendar, although those all have since been put on hold as COVID numbers continue spiking. Despite it still being a scary time, though, the cast and fans alike are itching to put on their fishnets and lipstick — well, maybe not with the mask — and head over to Fort Worth to be taken on a strange journey once again.

“We will be there with bells on, causing as many problems as we can,” Leah says. “We’ve missed everyone dreadfully. Everyone is so committed to the love that this community has for everyone in it. They’re ready to see everybody and they’re ready to do it safely. We’re so happy to be there again and feel the energy — and the toilet paper.”