Sound Bites: Josh Farrell Wants To Be Sure His Food Rocks. 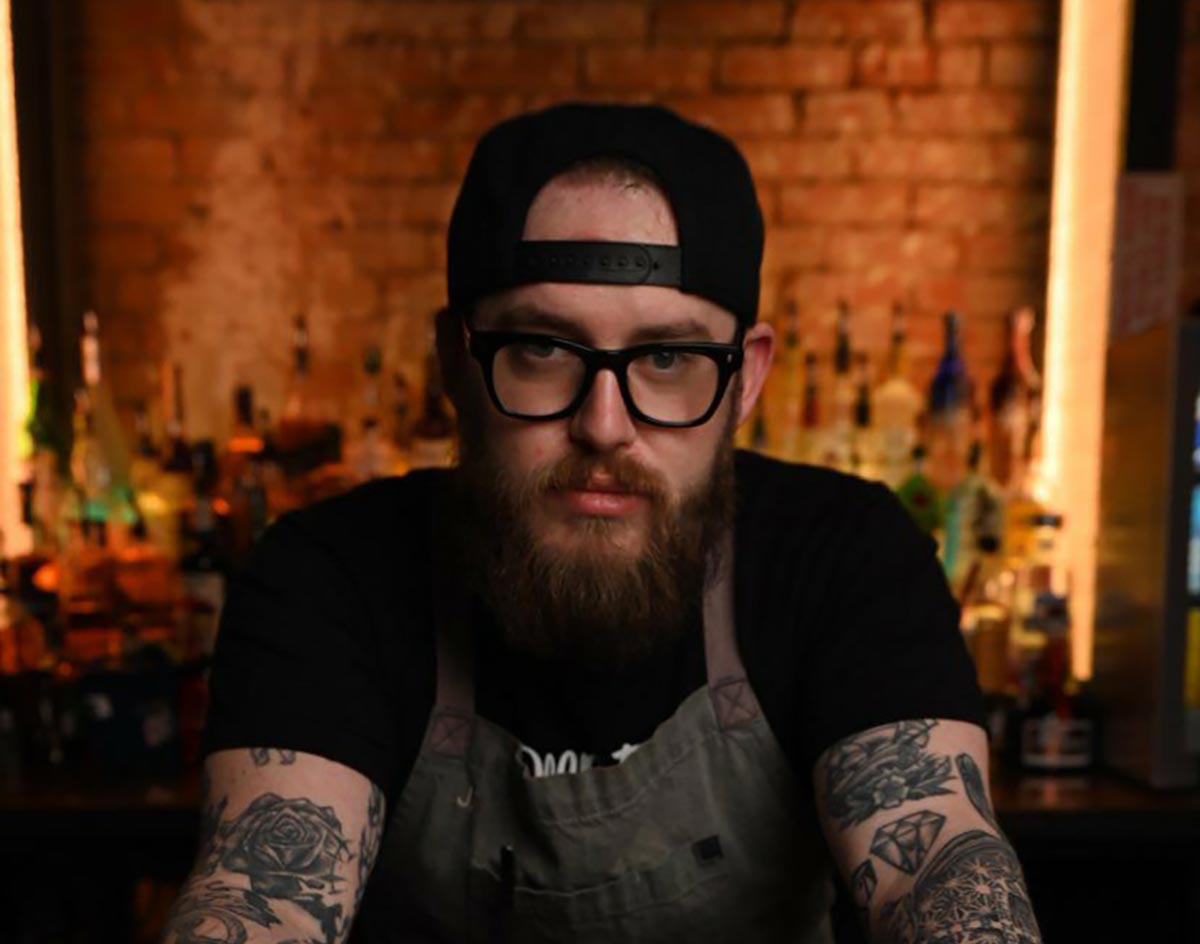 Will Call’s Josh Farrell Isn’t The Rock Star He Once Dreamed Of Becoming, But He’s Cooked For Some Of His Biggest Music Heroes, And That’s Pretty Damn Cool.

Josh Farrell grew up with dreams of becoming a rock star.

As a kid, the chef jammed to a Joan Jett & The Blackhearts cassette in his room. His mom took him to concerts. He recalls holidays spent in the kitchen of his home, cooking with family and dancing to music on the stereo as his grandma shouted to “Turn up the volume!”

“Music was always there for me growing up,” says Farrell.

So much so, in fact, that he even went to school for it. After majoring in music and commercial music at Collin College, though, the chef traded in his guitar for a spatula — at least professionally.

“Cooking seemed like it would pay the bills more,” he says. “So, I veered into that.”

Farrell’s culinary career eventually landed him in kitchens at Jasper’s and The Mansion. These days, he works as executive chef at the music-themed Will Call Bar, which (among other items) serves up some of the tastiest wings and cheesesteaks you’ll find in Deep Ellum or anywhere else in the city.

“I remember we were trying to hire some cooks, and this kid walked in with zero experience and he had a Deftones shirt on,” Farrell says. “Will Call owner J.R. [Muñoz] and I looked over to him — and I was like, ‘All right! Well, yeah, you’re hired. Here’s a spatula. I’ll show you. I will show you the way to the chicken wing.'”

Yes, it’s safe to say music plays a big role in the way Farrell approaches his work in the kitchen.

Hit play on some songs that the chef hand-selected as integral to his approach to food, then read on to check out our full interview about the intersection of food and music with the man himself below.

Do you remember the first album you purchased?
The first album that I picked out on my own and fell in love with — without it being like a parental figure passing it down or whatever — was a Joan Jett & The Blackhearts cassette. It was the first one that I was like jumping up and down to — listening to “Crimson and Clover” and, y’know, just loving life as a kid. I didn’t buy it, though.

The first CD I got was this variety world music CD from the library. I rented it, and I think I just kind of kept it. It had everything from Tibetan throat-singing to African chill music. It was very representative of my upbringing and outlook on life. My mom raised me to be accepting of other cultures. She’s a Puerto Rican, lesbian, single mother from New York, and she showed me that it’s OK to be whoever you are.

The first album I actually purchased was Tenacious D’s Tenacious D. I saved up my $19 or whatever and went to Tower Records in Boston and bought it. I listened to it with my mom and sang along to the songs about kielbasas and all kinds of other inappropriate things.

What was the first concert you attended?
I was probably like 10, and my mom took me to see Little Richard. I think it was one of these “Concerts in the Park” series or something — y’know, where it’s for a family crowd and it’s free or whatever, and everybody shows up with blankets and Dorito sandwiches. It was somewhere in Boston. I just remember there being a lot of people and a lot of blankets.

So he goes out there, on stage, and is like “Screeeeeeam if you love Little Richard!” and everyone goes nuts. And then he goes: “Shut up!” It was incredible. The whole concert was him being like “Yeah! Tutti frutti!” and then talking shit about how bad he got screwed over and how he made no money off his musical career.

It was, like, between the coolest thing ever and then also him showing you the truth behind what happened to him. He really did get screwed over. He needs a Netflix documentary ASAP.

How has music influenced your cooking?
Music has always been a part of my life. I’m half-Puerto Rican, and music is a part of everything we do as a family. We love to eat. We love to cook. We love to dance. We love to party. That’s just how my grandmother and mom raised me. If food is being made, music is being played. If music is playing, food is being made. And if you’re not dancing, you’re eating. Music isn’t in the background playing, either. If you go to Thanksgiving with my family, my grandmother is going to be complaining, like, “Why isn’t the music louder?”

If we’re getting our asses kicked on the line, and I see like six or seven tickets come in, I will stop. I will not call any of the tickets. I will get my phone out, and I will change the music to what it needs to be. Like, if we’re listening to something chill, then we’re changing it to some crazy dubstep stuff or whatever it may be.

I feel like there is certain music to go to certain things. Even when I was at the Mansion, where there’s no music, I would start singing “Bohemian Rhapsody” or something and get all the cooks to join in with me as we’re pushing food out.

What do you like to listen to when you cook these days?
A little bit of everything. I’m definitely known for listening to really eclectic stuff, which makes it fun for the kitchen. Will Call is a music-themed bar. The owner J.R. was in a band called Overscene; they were really big in the 2000s rock era, like, during the height of Drowning Pool and Ill Niño and the like. He’s tied into that. So the place represents that era, and so does our clientele.

It’s the coolest thing ever because I grew up very into music, especially rock music. A lot of people I admired are now in my life. I’ve gotten emotional about it here and there. I’ve been working here for two years, but one of my first customers, who’s now become a really good friend, is C.J. Pierce. He’s the guitarist from Drowning Pool. I grew up listening to them, and now I’m hanging out with this guy and he’s like, “Hey, bring your guitar sometime and we’ll jam out. Oh, and I love your cauliflower.” It is mind-blowing.

Stoney LaRue popped in the other day. He’s a big country artist, and he ran right up to me and was like, “Josh! I miss you! Good to see you!” And I’m like, “What! How do you miss me?”

Josh Abbott came by and bought all my duck fat cookies one time because he wanted them for his tour bus. And then there’s this dude that plays in 5 Billion and Counting — they’re this incredible rock band. There was this time when I was listening to them in the kitchen, and he walked in and was like, “Dude, are you serious? Are you listening to me right now?” And I’m like, “Are you serious? Are you in my kitchen right now?”

I didn’t become a rock star — but my friends are, and they like my food. As long as I get to see them and I get to listen to their music, I’m happy.

What kind of music do y’all play out in the dining room and main bar at Will Call?
J.R. is definitely very good at reading a room. Whether he’s picking the playlist or picking a DJ for a night, he can see the crowd changing and forming, and he’ll put on whatever he needs to chill them out or get them hype. He’s really good at doing that. And we have a great sound system in here.

If you could only listen to three albums for the rest of your life, what would they be?
Nile by Patrice. I found this guy when I was in Germany when I was like 17. I was chilling with some of my German homies, and they played this album. It’s one of the few albums that I can really listen to from beginning to end. And it’s a nice journey. I would definitely say it changed my life. It’s so hard to find. I think I could only find it on YouTube, which I felt bad for over the years because I didn’t get to pay this guy. I got a burned CD which messily said “Patrice, Nile.” I actually hit him up on Instagram a few weeks ago — and he hit me back! I almost cried. It was nuts. I was just like, “Dude, you changed my life!” And I asked him for his Venmo. I told him I’d like to send him some money just to support. I feel like I owe him that.

Tenacious D’s Tenacious D. I can never stop listening to that. I absolutely know every single inappropriate word. Even the little parody things.

The Queen of the Damned soundtrack. I could listen to that nonstop! Oh my god! The first time I saw that movie, like, I had no clue what to expect. Everything was just so amazingly done. I was very much into vampire rock, dark and griminess at the time. I think I was in eighth grade or something. The way that it was put together as an album was very well done in terms of the flow of it.