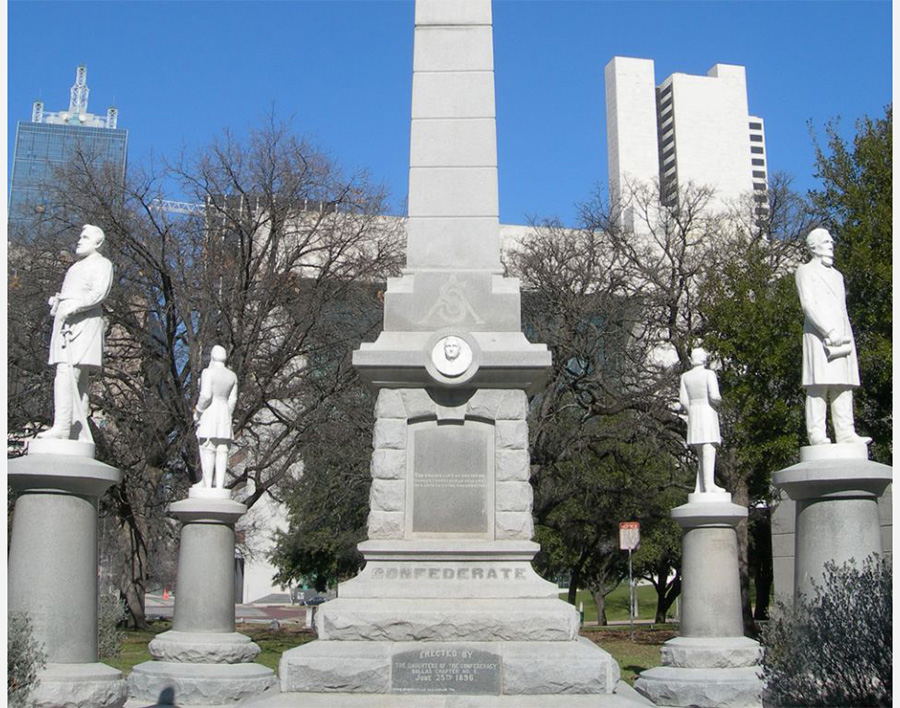 The City Approved It Two Fridays Ago, Construction Workers Dropped Off The Needed Gear Last Wednesday And They Finally Started Taking It Down On Monday.

A full 16 months after an 11-4 Dallas City Council vote in February 2019 to remove it, the 60-foot-tall Confederate War Memorial in Pioneer Park is finally coming down.

Its removal had previously been delayed due to a lawsuit filed by a group represented by former city council candidate Warren Johnson, but city attorneys filed a motion with the 5th District Court of Appeals on Friday, June 12, arguing that its continued presence represented possible danger amid the ongoing social unrest and protesting in the city.

The courts agreed, paving the way for its immediate removal. On Saturday, Jun 13, Confederate sympathizers gathered in front of the memorial ostensibly over fears that protesters might take the matter of its removal into their own hands before the city could get to it:

In a statement released Monday, June 15, the city said the statue’s removal could take up to 10 days.

On Wednesday, June 17, construction workers began preparing the site for their task of removing the long-standing piece.

On Monday, June 22, workers officially began the removal process — first by removing the four statues that stand on platforms surrounding the piece’s central obelisk, including one representing the likeness of Confederate Army commander Robert E. Lee.

Construction workers take down the statue of Robert E. Lee as they begin the removal of The Confederate War Memorial in Dallas. // Photos by Ryan Michalesko, @dallasnews https://t.co/g2ZE8JPgSK pic.twitter.com/0wOX9YHaRK

A webcam fixated on the statue allows you to follow along with its removal from the comfort of your own home.

The entire process is expected to cost the city $396,000 — less than the $480,000 it had once set aside for the purpose, but by no means a small figure. (As we have said before, we’re happy to volunteer our own, cheaper services — hell, we’re even happy to melt it.)

Where will the statue go upon its removal? Tough to say.

After another prominent Robert E. Lee statue was removed from Turtle Creek Park (formerly Lee Park) last year — its removal was also delayed by dubious lawsuits — that piece was put up for auction, where it eventually netted the city $1.435 million when it was purchased by an Addison-based lawyer. Eventually, that piece settled at the Black Jack’s Crossing Golf Course in Lajitas, Texas — a property owned by Dallas billionaire Kelcy Warren.

You may recognize Warren as the host of the recent fundraising dinner held in North Dallas for President Donald Trump’s re-election campaign. He is also the CEO of the Dallas-based Energy Transfer Partners company behind the controversial Dakota Access Pipeline, as well as the father of the namesake behind Dallas’ Klyde Warren Park. (He’s also a regular in our Biggest Dallas Asshats of the Year series.)

Warren is not the only monied area businessman with a predilection for statues of disgraced historical figures; real estate investor Harlan Crow keeps the busts of a number of disgraced dictators in his Highland Park home’s closely guarded sculpture garden.

Perhaps more important than where these statues end up, though, is which of Dallas’ many monuments to the Confederacy comes down next?