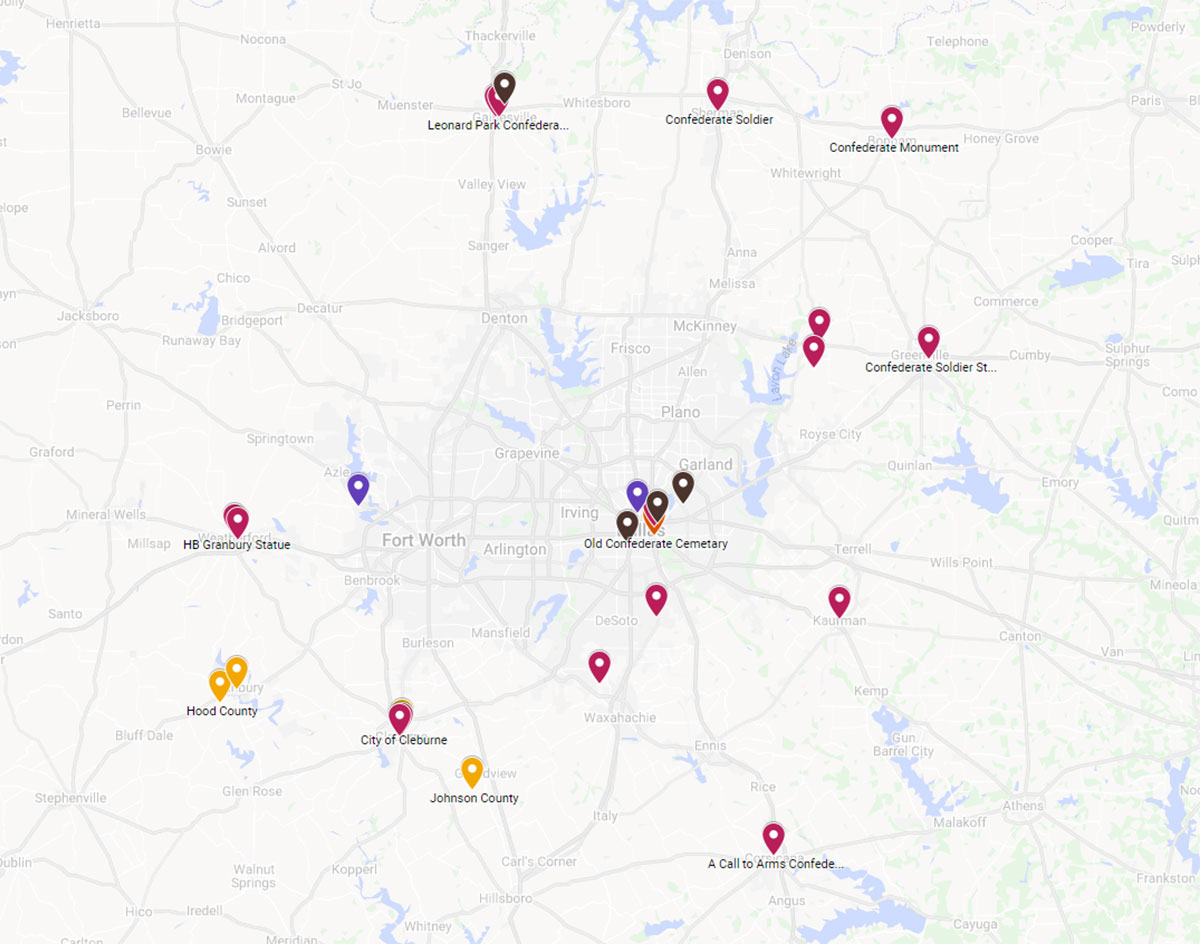 On A Saturday In Weatherford, Protesters And Confederate Sympathizers Clashed Over A Statue — One Of Many Still Standing Across The Region.

About 30 miles west of Fort Worth lies Weatherford, a town of about 25,000 people.

Normally a sleepy hamlet, Weatherford was the site of a heated conflict over the presence of a Confederate memorial this past Saturday. Right in the heart of the community, protesters, counter-protesters and police gathered — and occasionally clashed — throughout the day.

At the center of all this back-and-forth was Weatherford’s Monument to Confederate Soldiers. Erected more than 60 years after the end of the Civil War in 1929, the monument stands outside of the stately Parker County Courthouse, which marks Weatherford as the seat of Parker County. (The monument is not the only storied location in Weatherford; the current site of the Weatherford Chamber of Commerce, called the Santa Fe Depot, was built in 1908 under Jim Crow laws and featured segregated waiting rooms separated by the ticket office.)

Weatherford only marks the most recent flash-point regarding Confederate memorials in North Texas, and its monument’s placement outside of a county courthouse is not unique; there are at least eight other similar monuments sitting outside of courthouses across the greater Dallas-Fort Worth area.

More broadly, and when including other types of memorials (such as cemetery memorials or the names of cities, counties, buildings and roads), the monument in Weatherford is one of at least 28 still-existing memorials and names venerating the Confederacy in the greater North-Texas area.

SEE ALSO: ONE FOR THE ROAD. // How Dallas’ Roads Got Their Names.

It’s worth noting that neither these monuments, nor their construction, are a thing of the past. One was erected only five years ago in the town of Cleburne.

As cities and counties across the North Texas area continue to address the question of how to handle the complicated matter of memorializing a faction that sought to maintain the institution of human slavery indefinitely, it is worth highlighting the remaining memorials and landmarks stippling North Texas.

Erected in 1905 by the Confederate Veterans Association and the Daughters of the Confederacy, the monument is dedicated “to the Confederate soldiers who sacrificed their lives for a just cause.” It still stands outside of the Fannin County Courthouse in Bonham.

Johnson County was named for Middleton T. Johnson (1810-1866), a prominent politician in Texas. Johnson, who had opposed secession, nevertheless raised regiments for the Confederate army after the outbreak of the war. Johnson fled to Mexico after the defeat of the Confederacy fearing living under Reconstruction, but eventually returned to Texas, where he was elected to the state constitutional convention in 1866 shortly before his death.

In 1917, a Confederate Soldiers Monument was erected outside of the Johnson County courthouse in Cleburn.

In 1922, the Confederate Memorial Arch was erected in the Cleburne Memorial Cemetery.

Most controversially, the Statue of Patrick Cleburn was installed near the Johnson County Courthouse in 2015.

There are still a number of monuments, parks, schools, and streets with confederate names within the City of Dallas itself, although leaders have already removed two of the city’s most prominent statues.

John H. Reagan Elementary School is named after John Henniger Reagan, an American politician who served as the Postmaster General for the Confederacy and was noted as a staunch supporter of slavery who participated in the secession convention and believed “abolition would require Southern whites to ‘exterminate the greater portion of the [black] race.’”

Oran Roberts Elementary School is named after Oran M. Roberts, the 17th Governor of Texas and a pro-Confederate politician who was elected president of the Secession Convention. He was a Judge on the Texas Supreme Court and a Colonel in the Confederate army.

The Old Confederate Cemetery contains the graves of Confederate War veterans and is maintained by the City of Dallas Park Department. There is a Confederate monument in the center containing the names of many buried in the cemetery

At Fair Park, one of the statues in the Portico is dedicated to the Confederacy.

Lee Parkway, named after Robert E. Lee, remains to this day despite a recommendation to rename it from the Mayor’s Task Force on Confederate Monuments and a renaming of Robert E. Lee Park to Oak Lawn Park.

Outside of the City of Dallas — but still within the county in the town of Lancaster — lies a historical monument to a Confederate pistol factory.

In Farmersville, a Confederate Memorial was erected in 1917, per the Texas Confederate Veterans website.

In McKinney, there is a Confederate Memorial at Pecan Grove. It was installed in 2000 by the Sons of Confederate Veterans.

Gainsville in Cooke County hosts two Confederate monuments and a public school named after Robert E. Lee. Just recently, the city council voted to remove the monument in Leonard Park. The Courthouse monument and school name remain, but the future of these memorials is unclear.

Hood County, founded in November 1866, was named after Confederate General John Bell Hood. In a letter he wrote in 1864, Hood described his conviction that “negroes” were an inferior race.

In November 1866, the legislation organizing Hood County specified that the county seat, Granbury, be named for General Hiram Brinson Granbury, who served under General Hood.

A statue dedicated in 1913 to Granbury stands outside Hood County Courthouse. Granbury was “one of the most popular and colorful leaders in the Confederate Army” according to an essay written by a member of the United Daughters of the Confederacy in 1993.

In Hunt, a Confederate Soldier Statue was erected in 1926. Since 2004, it was standing on the grounds of a local museum — until just recently, when it was (reported by Herald Banner) moved to an “undisclosed, safe location” because the local chapter of the Sons of Confederate Veterans claimed there were (unconfirmed) “legitimate threats” against the monument.

A Confederate statue stands outside of the Kaufman County courthouse. The statue was originally constructed in 1911. Recently, Kaufman County Commissioners created a 15-member citizens commission to gather input on the statue and make a recommendation to the court on what its fate should be.

Confederate Park Road in Lakeside previously held two small Confederate flags, which were removed in 2017. But the road still bears the name and is considered a Confederate landmark.

In June, protesters clashed outside of the Grayson County Courthouse in the town of Sherman over the monument for Confederate Soldiers that was erected in 1897.

Outside of the Ellis County Courthouse stands a monument to Confederate Soldiers raised by the United Daughters of the Confederacy in 1912. In June, Ellis County citizens started organizing for its removal.