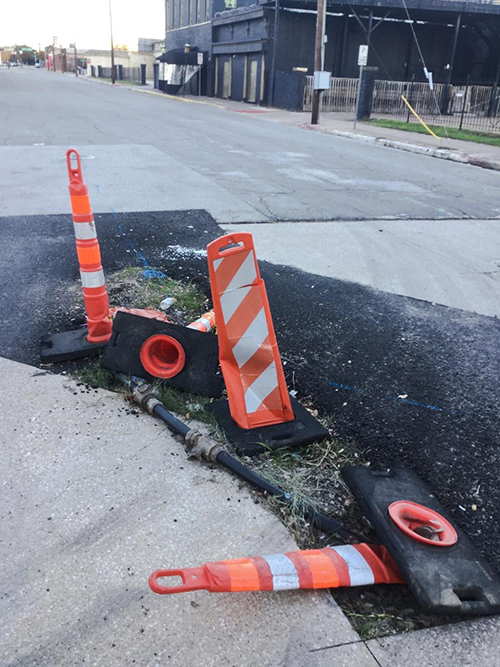 Measles And Potholes Wore Us Down This Week.

Just the Vax, Ma'am: Well, it finally happened. The fringe group of parents who don't vaccinate their kids against infectious diseases because of widely debunked science have made their “personal choices” a problem for the rest of us. A student at Schell Elementary School in Plano ISD, who wasn't vaccinated, contracted the measles and put other students, teachers and parents at risk. Though the student has since returned to school, officials won't be able to give the all-clear until the end of the month. Look, if you're a parent reading this? Vaccinate your damn kids! I'm not a parent, but I'm a human, and I don't want you to put other people — like those with weak immune systems — at risk because of some bullshit you read on the Internet. Minus 5.

Lake of Many Colors: It's not as bad as what's going on in Flint, Michigan, but something happened to part of White Rock Lake on Wednesday that's a little alarming: A section near East Lawther Road was a noticeable turquoise color through and through. There was a noticeable odor to witnesses but, yeah, it's definitely not that color usually. Officials are still running tests on the water, and hopefully whatever it is won't be damaging to people or wildlife. But, for right now, the unknown is a little scary. Minus 2.

Hole-y Shit: Once again, Mayor Mike Rawlings didn't back down. During a year-in-review session, the City Council patted itself on the back for patching more potholes than the year before. But that's not good enough, Rawlings said. As with several other city responsibilities, urgent maintenance has been put off and things actually have gotten worse. I'm sure that's fairly obvious to anyone who's driven these streets or been to any of the arts venues around town. As the DMN points out, expect that to be a big issue for next year's bond package which, even if approved, won't cover all the repairs needed. Minus 2 for still dealing with this, Plus 1 for Rawlings sticking to it.

Play Fair: We've talked before about reaching Peak Festival in North Texas, but apparently we're still not there yet. On Tuesday, the folks who run Homegrown Fest announced the Old 97's County Fair in Main Street Garden set for April 16. They'll also have Drive-By Truckers, Lucero, Deer Tick and local chanteuse Madison King on hand as well. And there's a Ferris wheel, too! Even if there's no way to go to all these (Homegrown will still go on as planned in May), I'm glad we're seeing such an influx of artists, especially since it seems like we're not getting that many touring acts at formerly packed venues like the House of Blues or the Granada Theater anymore. Plus 2.

Home Stand: The Mavs set a new record: They've now had four consecutive home games go into overtime. And, aside from a heartbreaker against LeBron James and the Cleveland Cavaliers, they've won all of them. They may break their streak tonight against the Oklahoma City Thunder. Hopefully that's because they'll win outright. But OKC does have two of the five best players on Earth right now and no Mavs made the starting lineup for the NBA All-Star Game. But, hey, Dirk and newly minted star Zaza Pachulia are likely candidates for the Western Conference bench. Plus 2.