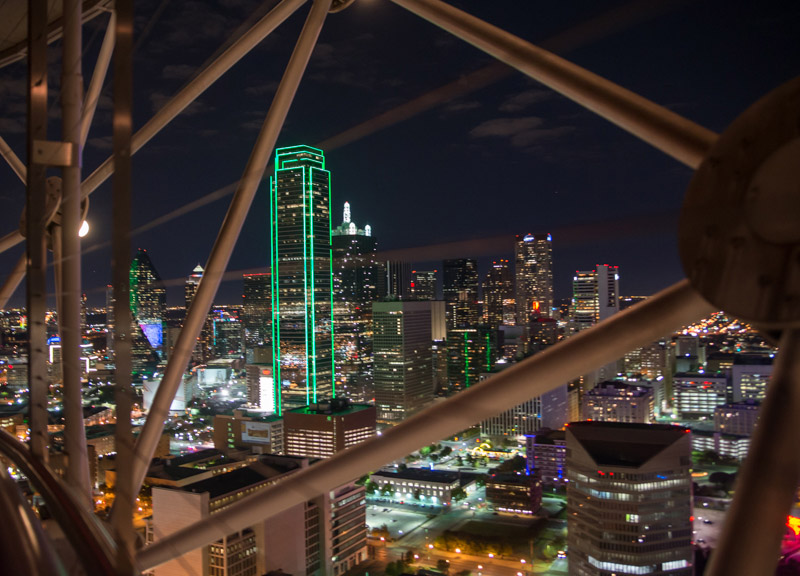 Looking Back At The Best And Worst Of Dallas In 2015.

It's been a crazy year in Dallas-Fort Worth.

On the negative side, we experienced lots of rain in a short amount of time, an appalling amount of Islamophobia and a string of chilling murders near White Rock Lake. Of course, there were some positives too, including a mayor who won't let our city be wrapped in fear, volunteers that pushed back against hateful rhetoric and some great sports action (not counting the Cowboys).

But let's take a closer look, shall we? Here, let's glance back at the best and worst goings-on in Dallas since we rebooted this column back in June.

Then check back here next week as we start with fresh eyes on 2016.

High Point. Good news! Not only is Texas — and the Dallas-Fort Worth region in particular — in a much better job situation than the rest of the country, but our region is also exceptionally good for women, turns out. The unemployment rate between guys and gals in Dallas is actually -0.2 percent, and that's good enough for fifth place in the country, right behind Oklahoma City, Nashville, Austin and San Antonio. In the wake of this news, let's all take a moment to be thankful we're not trying to find work in Las Vegas, where's the gender unemployment disparity sits at +2.4 percent.
Low Point. Without getting too controversial, here are the facts: was a pool party in McKinney; the police were called; and one of the responding officers barrel-rolled into the place, body-slammed a bikini-clad girl and pulled a gun on two on-looking boys. There were rallies and demands for investigation into the whole police department. And that officer? He since resigned. Either way, we made The Daily Show for the second time this year for an incident we'd all wish wouldn’t have even happened. All in all? Yeesh.

High Point. After years of lawsuits, the Supreme Court finally announced its decision: Gay couples have just as much right to get married as anyone else. It was the end of a domino effect, as Texas was one of only 14 states that hadn’t effectively legalized it. And now it’s the law of the land. The big announcement found its big beautiful moment in the union of Jack Evans and George Harris, the first gay couple married in Dallas County. Sure, officials in some counties (and a certain Attorney General) were still dicks about it, but the 5th Circuit Court of Appeals cleared all that up.
Low Point. It was such a happy time. The Mavs had finally landed their first big-time free agent in DeAndre Jordan. All was good in the world. Then that dishonorable S.O.B. went back on his word and back into the arms of the Los Angeles Clippers. On the plus side, I think we've all got a new least favorite NBA player now, huh?

High Point. It'd been a long time coming, but the City of Dallas finally tied Austin as being the best city in Texas for LGBTQ residents. Yup, the Human Rights Campaign gave our fair city a perfect 100 score since LGBTQ government employees (including police and firefighters) now earn equal benefits and treatment. Also fun? Dallas scored a whole 100 points higher than Irving! But that isn't surprising. They don't even like kids with clocks out there.
Low Point. Student Ahmed Mohamed brought his homemade clock to Irving's MacArthur High School. A teacher thought it might be a bomb, called the cops and had the kid arrested and suspended. The kid was humiliated — all because some ignorant person saw a brown kid with an electronic device and immediately assumed it was a bomb. (But they didn't shut down the school or call the bomb squad in… hmmm…) One day, America, Texas and the Dallas-Fort Worth region in particular are going to have to come to terms with Islamophobia. It's got to stop, you guys.

High Point. Believe it or not, a major production actually filmed in Dallas again! The last few shows to film here all got canned fairly quickly: The Good Guys, the Dallas reboot, GCB and the very short-lived Lone Star. But Hulu's 11/22/63, based on Stephen King's novel about a time traveler who tries to thwart the Kennedy assassination, actually shut down parts of downtown to make it a reality. Unsurprisingly, commuters were pissed. But this is a big deal. The Texas Film Commission offers weak incentives for any production to come shoot here. I mean, Matthew McConaughey starred in not one, but two movies set in Dallas, and both were filmed in Louisiana, which offers abundant tax credits. So for them to actually come here speaks to the commitment of the show's creative staff, but also will encourage more productions to come down here.
Low Point. Four people were found dead in the White Rock area over the course of one Monday. Police said none of the killings were connected, but that just added to the uneasy feeling. One of the more grisly murders was that of 53-year-old David Stevens. He was on his morning jog when Thomas Johnson, a former star on the Texas A&M football team, attacked him at random with a large knife. It's a story that doesn't make a whole lot of sense, but nothing seems to be making sense right now.

High Point. Let's give it up for Mike Rawlings, who refused to buy into the xenophobic bullshit peddled by his fellow mayor out in Irving or the governor of this great state. Rawlings said he welcomes Syrian refugees to Dallas, even as Governor Greg Abbott has refused to do so (something he doesn’t actually have the power to do, by the way) in the wake of the Paris attacks. This ignores the fact that the people who committed those atrocities in France were neither Syrian nor refugees, and that none of the refugees that the U.S. has settled since 9/11 have ever been arrested on terror-related charges. (This also ignores the fact that while, sure, it's theoretically possible that an ISIS soldier could apply to be a refugee and then in 18 to 24 months show up in the U.S., it's a lot easier to get a fake passport or exploit our student visa process to gain entry a lot faster. It's also easier to radicalize vulnerable people who already live here.) Rawlings didn't stop there, though. He also stated that he’s more scared of armed white men than he is of Syrian refugees. There's good reason for that, too: Just look at that theater in Colorado, that school in Connecticut or that church in South Carolina; we’re in far greater danger by people that were born and raised here than we are of people looking to flee the violence inflicted on them by ISIS and their murderous president. Thank you, Mayor Rawlings, for being a voice of reason.
Low Point. 31-year-old Paw Eh, a Burmese immigrant, was arrested and charged with attempted capital murder for trying to kill her four-year-old son. She forced him to ingest ant poison, according to an affidavit. Luckily, her two older kids ran to their grandmother’s apartment and a neighbor called 911. The son pretty quickly was nursed back to stable condition, but “stable” is obviously not a term that applies to Eh.

High Point. A week after a bunch of armed yahoos protested outside an Irving mosque and then took their dangerous antics to new heights by publishing the home addresses of local Muslims, around 200 people showed up in solidarity, welcoming their neighbors and treating them with respect — y'know, like you do if you're a decent human being. It's not quite enough to “restore my faith in humanity,” but this is a step in the right direction. Here's a helpful tip: If you see people harassing your neighbors, don't let them keep doing that. If they threaten you, come back with more people and let them know you won't be intimidated. It doesn't matter our race, gender identity or religion; we're all people. And people don't deserve to be harassed for any reason. It's almost as if there's a rule about this. Maybe one that's golden?
Low Point. Like a rotten onion, this story just has layer after shitty layer: Early on a Sunday morning, Ryan McMillan was shot and killed at the intersection of Fry and Oak streets in Denton. Peel back: He was a UNT student who had just turned 21. Peel back: A police officer shot the student. Peel back: McMillan was allegedly brandishing an ax. Next comes video from the Texas Rangers, who are investigating the officer who shot McMillan. McMillan can clearly be heard shouting, “Shoot me! Just shoot me!” Whatever happened that night was already sad, and continues become more tragic.