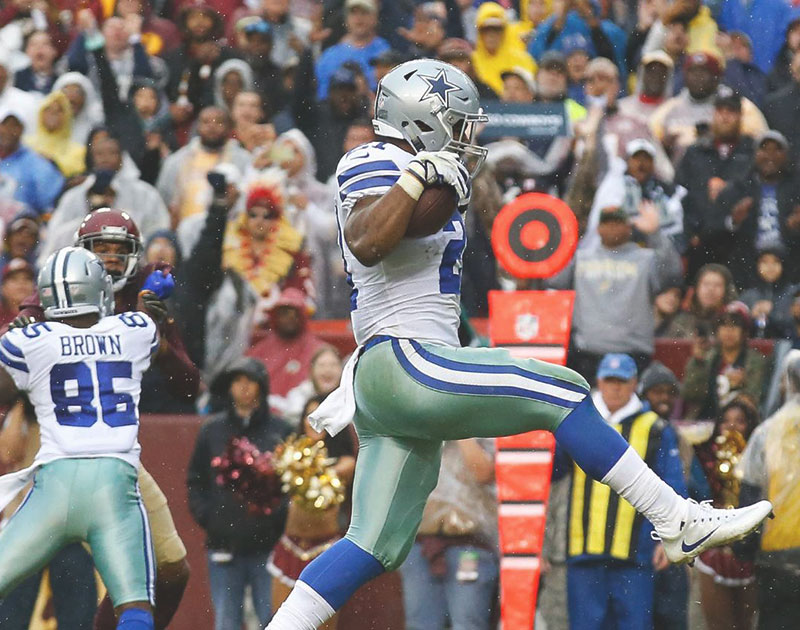 Zeke’s Quick Path To 20 Career TDs And More Takeaways From The Dallas Cowboys’ 33-19 Victory Over The Washington Redskins On Sunday.

Despite the fact that they should be 6-1 at this point, the Dallas Cowboys still look to be hitting their stride following yesterday’s 33-19 rain-drenched road win over the Washington Redskins, which ups the team’s record to 4-3.

Though the Dallas offense stumbled out the gates as Ezekiel Elliott fumbled in the Cowboys’ first offensive play for just the second time in his career and the first time on the season, the offense before long found its footing and scored more than 30 points for the fourth straight game — a good sign as the mid-season point approaches, obviously.

Following that early Zeke turnover, the Cowboys defense held the Redskins to just a field goal and its offense bounced back thanks to a 25-yard catch by Terrance Williams that set up a 13-yard Zeke touchdown where not a single defender was in five yards of his after he burst through the line of scrimmage. The same could also be said of Elliott’s second TD on the game, which came in the final minutes of the first half and gave the Cowboys a 14-13 lead over the Skins that they never relinquished.

Here are my main takeaways from yesterday’s win.

1. That first Zeke touchdown was especially notable due to the fact that, in just his 22nd career game, it was the young running back’s 20th career TD, making him the third-fastest all-time rusher to reach that mark. And Elliott, as he does, got even better as the game went on, finishing the day with 150 yards to go with his two touchdowns on 33 carries, with 102 of his rushing yards coming in the second half. While the status of his six-game suspension still looms, it’s nice to see Zeke in top form.

2. Elliott was the lone performer whose day really stands out in the box score. Dak Prescott was efficient, sure, completing 64 percent of his throws. But he only threw for 143 yards. Dez Bryant, meanwhile, only caught four passes for 39 yards, adding more fuel to the argument that he’s no longer an elite NFL wide out. Cole Beasley wasn’t any better, snagging just two catches for eight yards before leaving the game with a concussion. In fact, no Cowboys players beyond Bryant and Jason Witten even caught more than three passes, making Sunday’s performance a weirdly slow offensive one despite the fact that the team scored 33 points, and a surprising effort from a team that had put up more than 500 yards of offense in each of its two previous games.

3. This game provided Cowboys fans our first in-game look at newly acquired kicker Mike Nugent, who was picked up via free agency earlier in the week after a groin injury sidelined all-pro kicker Dan Bailey. Nugent was fine, doing what he needed to do. He went three-for-three on extra points after touchdowns and, while he missed his first field goal try from 49 yards, he ended up four-for-five on the day, connecting on fields goals from 36, 48, 27 and 37 yards, respectively.

4. Tyron Smith and this offensive line may have opened some huge holes for Elliott on the afternoon, the unit is still adapting to some position reshuffling and racking up way too many penalties. In all, the offensive line accounted for 50 penalty yards in the first half alone.

5. Just when it looked like Washington was about to extend its first-half lead to 16-7 over the Cowboys, Tyrone Crawford blocked a field goal attempt that was scooped up by Orlando Scandrick and ran all the way down to the Redskins’ four-yard line. After Elliott punched that ball in for his second TD on the game, the floodgates opened and the Cowboys rattled off 19 unanswered points. Momentum is a real thing!

6. Second-year corner back Anthony Brown has really been struggling. It’s just extremely evident at this point, as the secondary again stood out as the team’s clear Achilles heel. Just when it seemed as if the Cowboys were going to cruise to another win, holding a 26-13 lead for most of the fourth quarter, the Redskins scored on throw from Kirk Cousins to Josh Doctson after a pass interference call on Brown brought the ball to the one-yard line.

7. Weak as the secondary appears, the defensive line seems to be gelling more and more: Demarcus Lawrence and Company picked up another four sacks on the day and held the Redskins to just 49 rushing yards. Lawrence now has a league-leading 10.5 sacks on the season, making him the first Cowboys player to notched double-digit sacks in a season since Jason Hatcher pulled off that feat in 2013. And the season isn’t even halfway over yet! Pair that with David Irving’s five sacks (in just three games following his early season suspension) and with Tyrone Crawford’s four sacks of his own, and this defensive line is playing better than any we’ve seen from the Cowboys in years.

8. Following yesterday’s win, the Cowboys are now 2-0 in the division. Just as important was that this W marked gave the team its first back-to-back wins on the year. Barring a slip from the Philadelphia Eagles, who are now 7-1 on the season, the Cowboys are likely eyeing a wildcard entry into the playoffs, and will need more win streaks to feel comfortable about that position.

Will the Cowboys be able to extend their win streak to three games next week? It won’t be easy as the team welcomes the 5-2 Kansas City Chiefs to town. But there’s one thing every fan should be excited about: The game is being shown on CBS rather than FOX, and Antonio Ramiro Romo will be in the booth, calling his first ever Cowboys game since retiring in the offseason.