Como Somos: Sucio Doesn’t Want To Be Like Everyone Else. 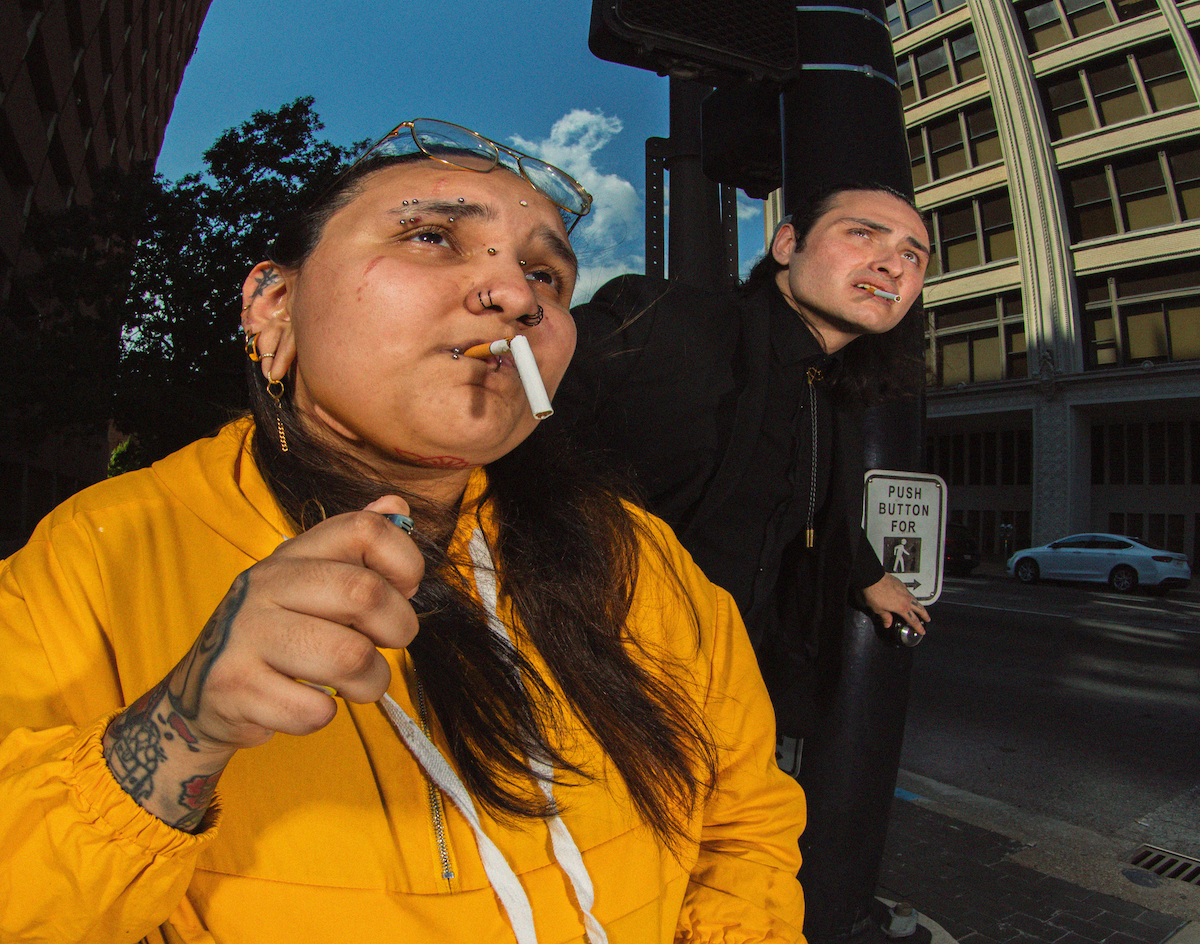 Ahead Of Its Upcoming Mini Album Debut, We Talked To Latinx Darkwave Duo Sucio About The Importance Of Being Yourself When Writing Music.

Welcome to Como Somos, a new recurring Central Track series about Latinx music in North Texas. Como Somos, a phrase that translates to “as we are” in Spanish, focuses on the up-and-coming Latinx acts that are heavily inspired by the sounds and roots of their cultural backgrounds. Here, they share their stories of what it means to be a Latinx musician in DFW today, as well as Spanish tracks that helped shape their artistry, to better connect with their ever-growing community.

Sucio is really fucking cool and only getting better.

Back in 2021, it seemed like Sucio only came to drop three alluring darkwave, gothwave and synthwave (all the waves, yes) tracks — one of which made it to No. 15 in our list of “2021’s Top 100 Area Songs,” and then, well, dipped. While we were waiting for Sucio, the darkwave Latinx duo made up of Ana Vasquez and Emilio Sterling, to release new music, they were both venturing on to other things — playing for other bands and secretly plotting the next move.

When Sucio announced its debut album was on the way, we think we speak for every one of its fans when we say: It’s about damn time. One of the most exciting bands to watch for in 2022 is giving us what we want to see and more. New music, new music videos, a fucking video game and physical copies of its new album.

Of course, we had to get to the bottom of this and figure out just who the heck these two think they are. We think we’ve figured them out, but this is still only the beginning for them. The two met years ago at a funeral (very goth, we must say) and officially became bandmates thanks to Sterling’s sister.

“I had been hanging out with my sister and listening to Molchat Doma and thinking, ‘Man, I wish I could find someone who would want to write stuff like this,” Sterling, who has played in other Arlington bands, says. “She was like, ‘You should check out Ana’s Instagram. It’s right up your alley.”

What makes Sucio such a badass band isn’t just because it’s one of the only young bands in DFW making this kind of stuff, but how it incorporates its family history into its music. Vasquez was inspired by her Mexican background and the sounds of her family’s village, while Sterling takes from his late mother’s favorite ’80s goth and indie music.

Between Spanish and English lyrics and the European post-punk movement, Sucio proves there are no borders in music.

Straight out of Arlington, or “Aggtown,” this is what Sucio had to say for themselves. Plus, a dope ass playlist of their favorite Spanish tracks.

Last year, I was going down a Spotify rabbit hole trying to find new music for Song Of The Day when I came across Sucio and the song “Tonight.” It blew my fucking mind and I think it blows everyone’s mind when they hear it for the first time. I was like, “Who even are these people and where did they come from?!” So, let me ask you the most basic question, who the fuck are you guys?

Emilio Sterling: As a unit, we are an aggtown Latin darkwave band.

Ana Vasquez: We’re trying to enjoy ourselves. We just let out fingers do their thing and let shit out.

What inspires your sound?

Vasquez: I keep thinking of childhood, like them old Mexican hits like “Tren Al Sur.” I go to Mexico and in our little village there’s always this party thrown. You know the sounds that Mexican keyboardist use? I was like, “I like that.” I was like, “I’m gonna do something with that.” Just fast, catchy beats and stuff.

Sterling: For me, it was mostly childhood. My mom listened to a lot of Depeche Mode, The Cure, Bauhaus, but she also been into The Smiths and Pearl Jam – that was one of her favorites. She really had a wide range, but I would say it was mostly her, for the New Wave stuff, that I mostly clicked with.

When I listened to you guys, I could not get over two things. Emilio’s Ian Curtis vocals and Ana’s Spanish lyrics. I’m a huge fan on Spanish darkwave and to see you guys making that kind of music here was exciting. So, let me ask this, why make Spanish and English music? Why not stick to one?

Vasquez: Everything we do is different; we’re not sticking to one thing. When we write it just comes out. Sometimes while we’re writing something, my vocals just come out in Spanish or it come out in English. Every song is different. One song he takes 80% and I take 20%. One song I sing completely. One song is half and half. It’s just basically so we can each explore our [artistry] and so we can enjoy ourselves.

Sterling: Yeah, we don’t really stick to one variation. When we first linked up, we were listening to a lot of Spanish darkwave, so it really just came naturally. Especially with “Attencion,” which was the first track, we were in the studio and we went in there with an entirely different sounding track. As things got going, it developed into “Attencion.” She actually hit me with the first line of the song, “Don’t say you know me,” and I kind of build off that. While I was in the booth doing that part, she was outside of the booth writing her for chords. So, it was kind of just happened.

Vasquez: You know, when you hear joke in Spanish, and you translate it to English, and it makes no fucking sense? Yeah, it’s just basically something similar, and Spanish was it.

Yeah, some things are easier to express in your native language. I totally get that. What are y’all’s cultural backgrounds?

Sterling: I’m just a good old American mutt, really. My dad is from East Texas, Scots-Irish, half Indian guy. His father was Scots-Irish Appalachian. My grandmother was from Mississippi-native. My mom is a Mexican. She hails from Michigan. She grew up in Port Huron, and then after she joined the army and conceived me, she moved to Texas.

Did you guys grow up with a mix of Spanish and English music?

Sterling: I grew up with my grandmother and she’s mainly the one who played a lot of the rancheras and the Tejano stuff. One of my earliest memories is Michael Salgado’s “Palomita Blanca” and it’s still one of my favorites. “Un Puno De Tierra,” of course was a classic, whenever she gets her booze on that one’s always playing.

Vasquez: Whatever was a hit at the moment was what my mom was listening to. She loves Luis Miguel so I got into orchestra type of shit.

What are your thoughts on the Latinx music community here?

Sterling: I think it’s growing for sure. I think it’s exciting and it’s very fun. Even just bands that aren’t from Texas, like the genres of the The Marias, it’s always so nice.

Vasquez: I like the Dallas scene. There’s a pinch of everything. You can’t say there’s no orchestra artists or something because there’s always going to be someone. I like it because everybody here is pursing something. Overall, people are really supportive and really nice. It’s motivating to watch other people.

Your first release was “Attencion” last year and you just released the official music video for it. Who all took part in that?

Vasquez: I contacted Porous Freak and they replied and flew from New York to come here. They helped me get the casting, they got people to be the characters and people to help out with the lighting and the atmosphere and shit like that. We did it in Dallas. We did it under this bridge where a bunch of people to burnouts – a bunch of Trokiando people were there. While we were shooting, some people were doing burnouts in the background. You can hear it in the video and the bloopers.

Sterling: They must have thought it was a car meet or something, but it was a lot of fun. It all just came together and all those extras put 110% into that video – so, nothing but high praise to them. They all really committed 100%.

You guys have a new mini album coming out this month, could you share the album’s theme with us?

Vasquez: The concept of the album — photo wise — it’s pretty, like, industrial-looking.

Sterling: There’s not really a set narrative that the album follows. It’s not telling a grand story or anything, like the album is essentially just everything that we’ve kind of created so far. Just put together in another little bunch. Yeah, just in a little package. It’s kind of just our …

Vasquez: … growth. You can hear the differences between the songs so you can tell we’re getting more comfy. It’s a wide range.

Sterling: Shout out to our producer, JoJo [Centineo], who has helped us grow as artists. He really taught us a lot recently when we went out to LA to work on one of the last tracks of the album.

Vasquez: Stop following other people, I guess. You don’t have to sound like certain people just do your thing. Yeah, just go for it, you know. I’m like “this is cringe, I don’t know,” but this isn’t for anyone, this is for me.

We asked Sucio to share 10 Spanish tracks they love or were inspired by, in no particular order. Check out our Spotify playlist to listen.