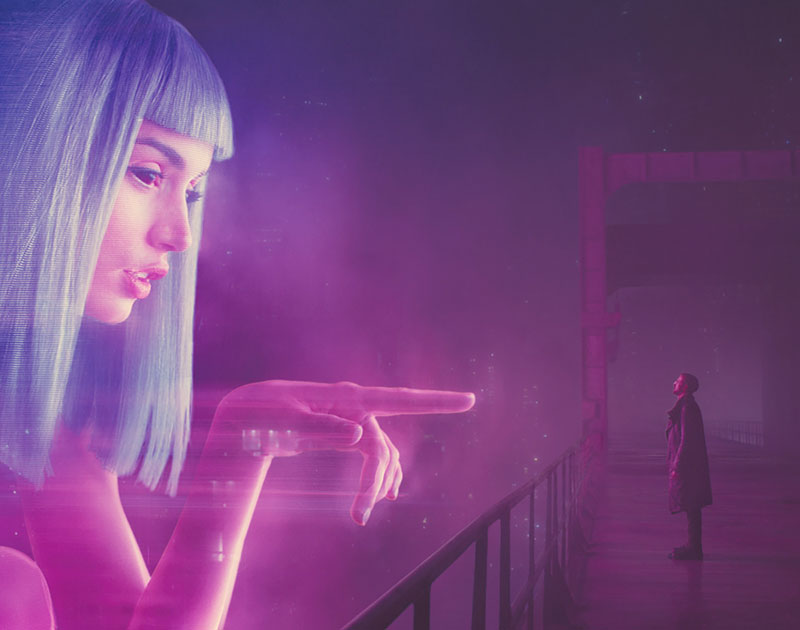 On Blade Runner 2049, The Florida Project And The Rest Of October’s New Releases, Limited Showings and Repertory Screenings Across Dallas.

This month is really action-heavy — but that’s only because the comedy and animation offerings are pretty dire.

Still, it’s not all explosions this month. Pretty much every offering that’s slated for limited release this month has a solid chance of picking up at least one Oscar nomination.

Oh, and because it’s October, you can bet that almost all of the repertory selections are appropriately scary. The Texas Theatre in particular is a treasure trove for horror junkies this month, with screenings of iconic films like Night of the Living Dead, Texas Chain Saw Massacre and Hellraiser.

That all said, here’s where you’ll be planting your butts in seats this month.

Blade Runner 2049.
Director: Denis Villeneuve.
Writers: Hampton Fancher, Michael Green.
Cast: Ryan Gosling, Harrison Ford, Ana de Armas, Jared Leto.
Opens: Friday, October 6.
I’m trying my best to temper my expectations for this belated sequel. Denis Villeneuve is one of the most fascinating filmmakers working today, having knocked it out of the park with his cartel revenge thriller Sicario and last year’s astonishing alien invasion drama, Arrival. In this follow-up, set 30 years after Ridley Scott’s original, Ryan Gosling is the one hunting replicants, teaming up with Harrison Ford’s grizzled veteran detective. Even if the movie doesn’t connect emotionally — a small problem with the original, truth be told — it’s going to be the most visually stunning movie of the year.

The Foreigner.
Director: Martin Campbell.
Writer: David Marconi.
Cast: Jackie Chan, Pierce Brosnan, Charlie Murphy, Michael McElhatton.
Opens: Friday, October 13.
Jackie Chan goes full late-period Liam Neeson in this thriller. After his daughter is killed in a bombing and the government refuses to help – and may even be involved in a cover-up – our lead strikes out on his own for some sweet vigilante justice. Chan — sorry, that’s Academy Award winner Chan — may not be as spry as he used to be, but few things are as pleasurable as seeing him wail on a bunch of thugs and narrowly escape certain death.

Only the Brave.
Director: Joseph Kosinski.
Writers: Ken Nolan, Eric Warren Singer.
Cast: Taylor Kitsch, Jennifer Connelly, Josh Brolin, Miles Teller.
Opens: Friday, October 20.
It’s been a long time since we’ve had a firefighter movie, which should be come as easily and frequently as movies about the military considering they check all the same boxes — excitement, bravery and camaraderie. This one’s got a hell of a cast, which also includes James Badge Dale, Andie MacDowell and Jeff Bridges. Plus, director Joseph Kosinski’s movies always have breathtaking visuals, even if their scripts are often lacking. Luckily, he’s working with different writers this time.

The Snowman.
Director: Tomas Alfredson.
Writers: Hossein Amini, Peter Straughan, Soren Sveistrup.
Cast: Michael Fassbender, Rebecca Ferguson, Val Kilmer, J.K. Simmons
Opens: Friday, October 20.
It’s October, which means we are destined to get a dark, R-rated thriller based on a best seller. Last year it was The Girl on the Train. In 2014, it was Gone Girl. This year, it’s The Snowman, based on Jo Nesbo’s seventh novel about detective… hold on, this can’t be right… Harry Hole? Weird. Anyway, Fassbender plays the investigator trying to catch a killer who likes to leave clues, and also decapitate his victims and replace their heads with snowman heads. Director Tomas Alfredson (Let the Right One In) knows how to balance snowy landscapes with horrifying violence.

The Florida Project.
Director: Sean Baker.
Writers: Sean Baker, Chris Bergoch.
Cast: Willem Dafoe, Brooklynn Prince, Valeria Cotto, Caleb Landry Jones.
One of the most acclaimed films of the year so far is this poignant dramedy. The Florida Project refers to a housing project where several kids live as they try to navigate the hot Florida summer and try to hold onto their innocence as they deal with things they shouldn’t have to worry about — things like being adjacent to drugs, prostitution and crushing poverty.

The Killing of a Sacred Deer.
Director: Yorgos Lanthimos.
Writers: Yorgos Lanthimos, Efthymis Filippou.
Cast: Nicole Kidman, Colin Farrell, Raffey Cassidy, Barry Keoghan.
The Lobster was one of my favorite movies last year — a frequently funny, occasionally terrifying, completely realized world. The latest from writer-director Yorgos Lanthimos goes straight into horror territory, as Martin (Barry Keoghan) tries to infiltrate the life of surgeon Steven Murphy (Colin Farrell), who may or may not have accidentally killed Martin’s father while he was under the knife.

Wonderstruck.
Director: Todd Haynes.
Writer: Brian Selznick.
Cast: Millicent Simmonds, Julianne Moore, Oakes Fegley, Michelle Williams.
Todd Haynes, director of some of my all-time favorites, tackles his first kid-friendly movie. Brian Selznick adapts his own novel, which tells parallel stories of kids with trying to find themselves in New York in the ’70s and the ’20s. Selznick also wrote the novel that became Hugo, which similarly gave a master filmmaker a chance to make a story for kids deeper and more impactful.

Friday the 13th Marathon.
Director: Steve Miner.
Writer: Sean S. Cunningham.
Cast: Betsy Palmer, Kevin Bacon, David Kagen, Kane Hodder.
Playing At: Alamo Drafthouse Richardson.
Showing: Friday, October 13.
Relentlessly mocked when it first came out, the saga of Jason Voorhees has gone on a lot longer than anyone ever expected. Like any long-running horror franchise, some entries are better than others. But because there’s an actual Friday the 13th in the spookiest of all months, and this is the rare chance to see all the original films on that spookiest of days. For $31, you get all eight original films, from the 1980 classic to 1989’s Jason Takes Manhattan.

The Exorcist.
Director: William Friedkin.
Writer: William Peter Blatty.
Cast: Ellen Burstyn, Linda Blair, Max von Sydow, Jason Miller.
Playing At: Majestic Theatre.
Showing: Sunday, October 29.
This one’s a lot slower than you remember — for real, all the best-known moments happen in the last 30 minutes — but it’s also sadder and more devastating than most horror movies. It’s so well-crafted, it’s no surprise it was nominated for 10 Oscars, a feat no other horror movie has ever matched.