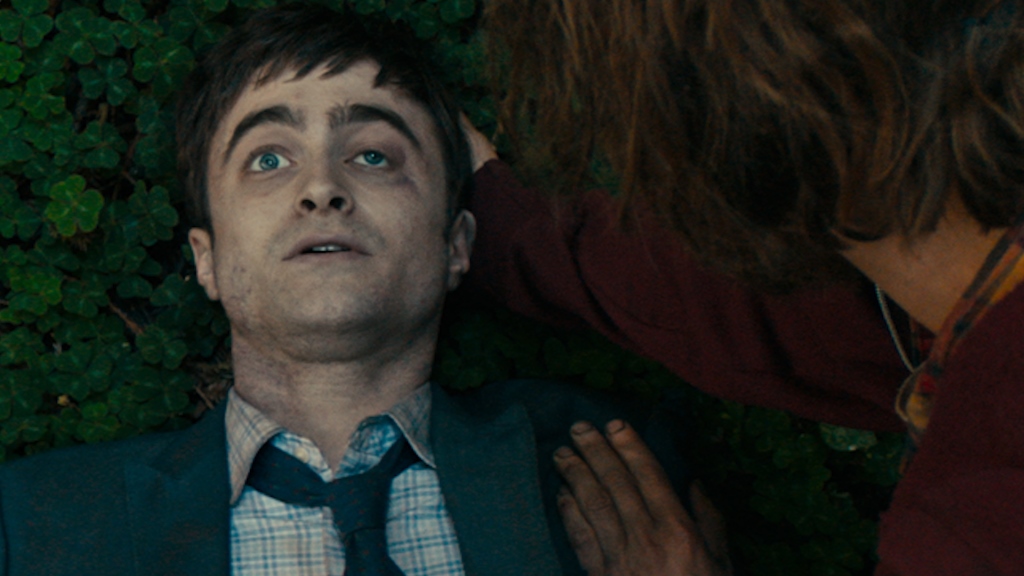 On The Farting Corpse Movie, And The Rest Of July's Best Bets.

It's hard to believe the summer's already a month over! Or, wait, is it harder to believe that we've still got a few months left of this crap? Either way, it's already way too hot outside — and on that much, I'm sure we can all agree.

Maybe we can agree this too, then? Let's all spend the anniversary of the greatest Brexit of all time on July 4 — and the rest of the month while we're at it — by taking in the best movies coming out, which we'll take a closer look at before.

As always, just remember to check local listings for theaters and showtimes before leaing the house, and especially for limited releases.

Swiss Army Man.
Directors: Dan Kwan, Daniel Scheinert.
Writers: Dan Kwan, Daniel Scheinert.
Cast: Paul Dano, Daniel Radcliffe, Mary Elizabeth Winstead, Richard Gross.
Yes, it's the farting corpse movie. But reviews have been surprisingly strong for this riff on Cast Away that features Paul Dano as the lone survivor stranded on a desert island — along with his re-animated buddy (Daniel Radcliffe). If nothing else, no other release this summer will be as weird or as memorable as this comedy.

Ghostbusters.
Director: Paul Feig.
Writers: Paul Feig, Katie Dippold.
Cast: Melissa McCarthy, Kristen Wiig, Kate McKinnon, Leslie Jones.
Anything that pisses internet trolls off this much must be pretty good, right? Look, like most reboots, this is wholly unnecessary. I'd much rather see these four fabulously funny ladies do an original comedy with a solid director like Paul Feig. Really, my apprehension has everything to do with Hollywood's lack of originality and nothing to do with ladies getting all their femininity on an '80s property (which I, for one, hold no affection for anyway).

Star Trek Beyond.
Director: Justin Lin.
Writers: Simon Pegg, Doug Jung.
Cast: Chris Pine, Zachary Quinto, Zoe Saldana, Idris Elba.
The previous Star Trek series and movies carry no weight with me whatsoever, but I really enjoyed J.J. Abrams' two Star Trek movies (blasphemy, I know). This one finds Justin Lin behind the wheel, since J.J. left for Star Wars' greener pastures. Lin's best known as the director of entries three through six in the Fast and Furious franchise, but he's a lot more visually nimble than J.J. — and has a better visual sense of humor. A little levity is just what this world needs after the, well, darkness of Star Trek into Darkness.

Jason Bourne.
Director: Paul Greengrass.
Writers: Paul Greengrass, Christopher Rouse.
Cast: Matt Damon, Alicia Vikander, Julia Stiles, Tommy Lee Jones.
The Bourne Supremacy and The Bourne Ultimatum are two of the best action movies of '00s, so I'm extremely pumped for the return of both Matt Damon and Paul Greengrass to the series. Yes, the series basically boils down to some well-choreographed fights while an overqualified actor stands in a room with too many monitors, yelling at staffers: “Get me everything you can on this guy!” But it's the level that it's executed at that sets this franchise apart.

De Palma.
Directors: Noah Baumbach, Jake Paltrow.
As I noted in our wrap-up of this year's Oak Cliff Film Festival, De Palma is a delight for devotees of the director, as well as for aspiring filmmakers. This career overview is a history lesson, tribute and film school all in one. On July 1 and 2, you can follow this with his breakthrough film Carrie at the Texas Theatre.

Don't Think Twice.
Director: Mike Birbiglia.
Writer: Mike Birbiglia.
Cast: Mike Birbiglia, Keegan-Michael Key, Gillian Jacobs, Chris Gethard.
Mike Birbiglia is one of my favorite comedians, partly because his jokes never feel like jokes. His debut film Sleepwalk with Me is a low-key gem, too. This follow-up should provide even more laughter and melancholy as only some members of a close-knit improv troupe get called up to the big leagues. The Dallas Comedy House is also sponsoring two screenings of the film at the Magnolia on Sunday, July 10, with Birbigs himself in attendance.

Our Kind of Traitor.
Director: Susanna White.
Writer: Hossein Amini.
Cast: Ewan McGregor, Naomie Harris, Damian Lewis, Stellan Skarsgard.
I will be the first to admit that the first half of Tinker Tailor Soldier Spy doesn't make a lick of sense. But I am still all about well-dressed European people solving twist-filled mysteries written by John le Carré. This time, it's Ewan McGregor and Naomie Harris getting caught up in an international disaster, with both the Russian mob and British Secret Service wanting them dead.

Café Society.
Director: Woody Allen.
Writer: Woody Allen.
Cast: Jesse Eisenberg, Kristen Stewart, Steve Carell, Corey Stoll.
As always, Woody Allen is hit-or-miss. (And given his alleged crimes, you may not even be interested.) But this looks like another hit, as well as an Adventureland reunion. Jesse Eisenberg and Kristen Stewart fall in love again, but this time they're navigating the clubs of early '30s New York instead of an amusement park.

Airplane!
Directors: Jim Abrahams, David Zucker, Jerry Zucker.
Writers: Jim Abrahams, David Zucker, Jerry Zucker.
Cast: Robert Hays, Julie Hagerty, Leslie Nielsen, Robert Stack.
Playing At: Inwood Theatre.
Showings: Friday, July 1; Saturday, July 2.
There may be better comedies — ones with more heart, an actual story or better acting. But you would be hard-pressed to find a comedy that provides more laughs per minute than the ZAZ team's finest hour. Even more than 35 years later, there's still at least one solid belly laugh every single minute for its entire runtime. Part of its genius is knowing exactly when to play it straight — the movie is essentially a remake of 1957's Zero Hour! — and when to go broad (or to deploy June Cleaver spouting jive talk).

Blow Out.
Director: Brian De Palma.
Writer: Brian De Palma.
Cast: John Travolta, Nancy Allen, John Lithgow, Dennis Franz.
Playing At: Alamo Drafthouse Dallas.
Showing: Monday, July 18.
One of the best thrillers of all time, Brian De Palma's riff on Blow-Up contains John Travolta's best performance and one of the bleakest endings ever in a mainstream American movie. Travolta plays a sound engineer who may have witnessed the murder of a governor. The truth lies in the audio he recorded that night, which puts him and the people he cares about in danger.

The Band Wagon.
Director: Vincente Minnelli.
Writers: Betty Comden, Adolph Green.
Cast: Fred Astaire, Cyd Charisse, Oscar Levant, James Mitchell.
Playing At: The Magnolia.
Showing: Tuesday, July 12.
When it comes to musicals that don't star Gene Kelly, this is as good as it gets. Fred Astaire plays an aging star hoping to restart his career in a musical retelling of Faust. Yeah, there's plenty of meta-commentary here about how unkind Hollywood can be. That's not surprising considering that Betty Comden and Adolph Green (Singin' in the Rain) wrote the script. Like that film, there are plenty of memorable dance scenes and dynamite chemistry between the two leads.

The Last Waltz.
Director: Martin Scorsese.
Playing At: Majestic Theatre.
Showing: Sunday, July 24.
In my opinion, this is the finest of all rock docs. An insight into what makes great musicians tick, Martin Scorsese's behind-the-scenes look at The Band's final show gives us a peak behind the curtain, showing us the tears in the fabric that caused the band to fall apart. Of course, it also helps that the legendary Thanksgiving 1976 show is one of the best concerts ever recorded, including guest spots from Bob Dylan and Van Morrison. This is part of the Texas Theatre's Rock 'n' Roll Summer series, which also includes The Beatles' delightful A Hard Day's Night, the Rolling Stones' harrowing Gimme Shelter and Bob Dylan's iconic Don't Look Back.