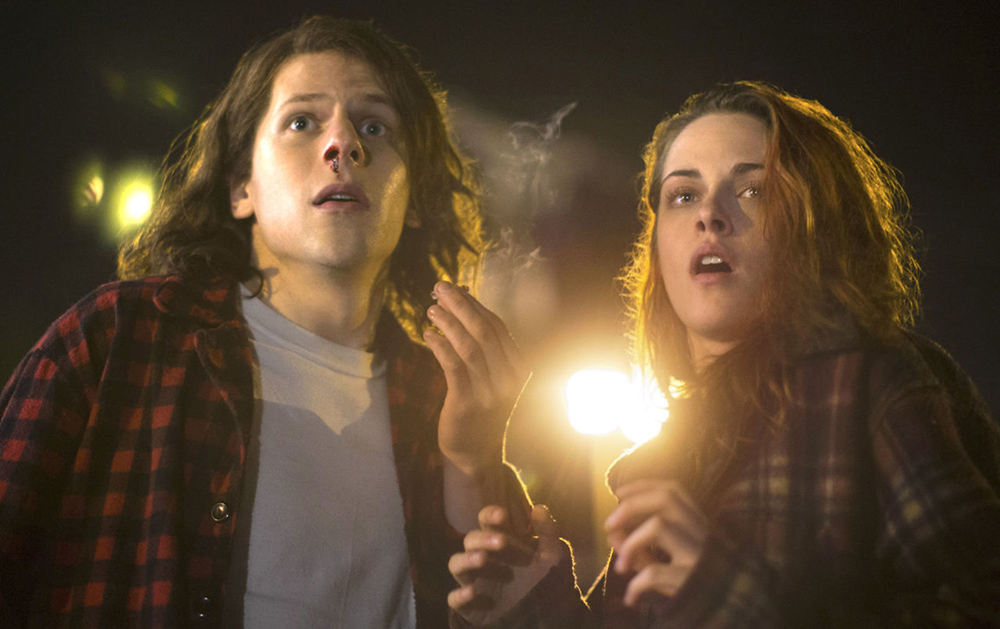 On American Ultra And The Rest Of The Weekend’s New Film Releases.

American Ultra.
Director: Nima Nourizadeh.
Writer: Max Landis.
Cast: Jesse Eisenberg, Kristen Stewart, Connie Britton, Topher Grace.
Playing At: Wide.
Combining a stoner comedy with some international espionage is a risky proposition. But if anyone can pull it off, it's Jesse Eisenberg, who's undervalued as a comic actor. He plays Mike, a convenience store clerk who's essentially Jason Bourne — a trained killing machine unaware of his power until the government comes looking for him. Frankly, we need more nutso movies like this.

Sinister 2.
Director: Ciaran Foy.
Writers: Scott Derrickson, C. Robert Cargill.
Cast: Lea Coco, Shannyn Sossamon, Robert Daniel Sloan, Dartanian Sloan.
Playing At: Wide.
Modern horror movies usually fall into two categories for me: “That looks stupid!” or “That's going to keep me up at night!” This sequel to 2011's unsettling Sinister looks like it falls firmly in the latter camp. It's not the ghosts or boogeymen that bother me; it's the snuff films that the families are forced to watch. Homey don't play that. Just like in the first film, this one features a nice family and a haunted house and some kids lured into some evil places. It's enough to give someone the willies, for sure.

The Diary of a Teenage Girl.
Director: Marielle Heller.
Writer: Marielle Heller.
Cast: Bel Powley, Alexander Skarsgard, Kristen Wiig, Christopher Meloni.
Playing At: Angelika Dallas, Angelika Plano.
Like an X-rated Juno, Minnie (Bel Powley) is a quick-witted teenage girl without a filter. Based on the acclaimed graphic novel, this comedy mixes live action and animation to tell this coming-of-age story. The sharp cast and period setting put this one apart.

The Young & Prodigious T.S. Spivet.
Director: Jean-Pierre Jeunet.
Writers: Jean-Pierre Jeunet, Guillaume Laurant.
Cast: Kyle Catlett, Helena Bonham Carter, Judy Davis, Callum Keith Rennie.
Playing At: Angelika Plano.
While I do love Jean-Pierre Jeunet's Amelie, this one looks a little too cutesy even for me. Here, Kyle Catlett plays the titular character, who leaves his family farm and hitchhikes to Washington, D.C. to collect an award. But like all Jeunet films, it will definitely look pretty.

Being Evel.
Director: Daniel Junge.
Playing At: Texas Theatre.
This doc takes a warts-and-all look at America's most famous daredevil. While most know his death-defying feats on the bike, the movie also sheds light on his violent temper and contentious business relationships. Johnny Knoxville (Jackass) serves as both producer and fanboy here.

She's Funny That Way.
Director: Peter Bogdanovich.
Writers: Peter Bogdanovich, Louie Stratten.
Cast: Imogen Poots, Owen Wilson, Jennifer Aniston, Kathryn Hahn.
Playing At: LOOK Cinemas.
Peter Bogdanovich hasn't directed a feature film since The Cat's Meow (2001). And judging by this tepid backstage comedy, he should probably take another extended break. Owen Wilson plays the director of a play who's having an affair with the leading lady (Imogen Poots) and trying to hide it from his wife (Kathryn Hahn), who's also in the cast. This is a great group of actors, and they deserve better than what they appear to be getting here.

The Decline of Western Civilization Trilogy.
Director: Penelope Spheeris.
Playing At: Texas Theatre.
Showings: Friday, August 21; Saturday, August 22; Sunday, August 23.
Penelope Spheeris' seminal documentaries on punk rockers, metalheads and homeless teens developed a huge cult following over the years. She'll even be on hand to answer questions on Friday and Saturday, sharing, I'm sure, her thoughts on why some think Part II is one of the funniest movies ever made.