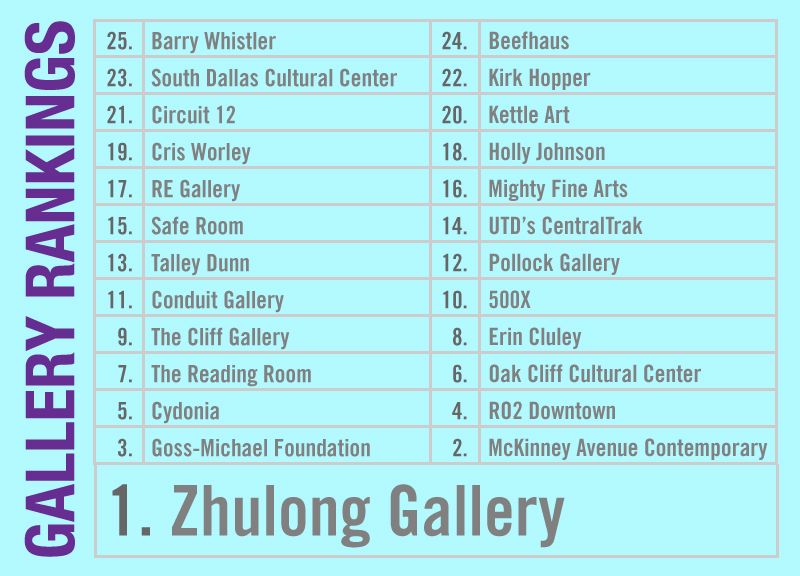 Welcome to Canvassing, our regular look at the conversations that surround the Dallas art world. Pull up a chair. Stay with us for a while. The view's pretty nice from here.

My good people: It's been a long time — too long a time — since we last spoke. I know. I've missed you, too. I also know that a lot has happened since our last correspondence more than two months ago

That said, I come bearing good news! Canvassing is back! And, as ever, it will be full of surprises to both keep you on your toes and informed about what is going on in culture in Dallas.

Before we begin, though, I can't in good conscience go any farther without commenting on the artist Loris Greaud and his misogynistic messages to Dallas Observer arts editor Lauren Smart in the wake of her critical take on his Dallas Contemporary exhibition. I'll be blunt: There's no room for misogyny anywhere, let alone in the contemporary art world. And, no, misogyny is not art, as Greaud is now grossly arguing. Sorry, but it is that simple.

So: Congratulations to Smart for calling Greaud out — and for sparking a national and international conversation in the process.

Now, onto other matters. One new thing that we'll be doing this year with Canvassing is a power rankings of the top 25 non-museum art spaces in Dallas at the start of every month. I know what you are thinking — that it's crazy to attempt to rank spaces that might have very different agendas, audiences, goals, budgets and ambitions. Still, we are going try anyway. Now, granted, I'll be the first to say that these rankings probably won't be very useful to people who are already deeply embedded into the art world. But that's not necessarily who this column is aimed at, anyway. Plus, ranking things is something this site does pretty frequently on other topics already.

For the casual fan, or for the person who might not care at all about contemporary visual art yet, my hope is that these rankings will serve as a possible entryway — a friendly attempt to cut through the noise and create an ongoing, relatable narrative about what is actually happening in the Dallas arts world.

As ever, we invite you to go to all of these spaces, to find a gallery you want to root for, to get upset that your favorite space was snubbed, to argue over beers about which spaces are overrated and underrated and to tell us your own take via social media. Sound good? Good.

Now, one last thing before we dive into these rankings: They'll be based off of the exhibitions, news and happenings of the previous month (January in this case). It's month to month — and, as they state on every financial prospectus, past performance does not guarantee future results. Finally, please keep in mind that all rankings are created very unscientifically by a committee of one.

Without further ado here are the inaugural Gallery Power Rankings

25. Barry Whistler.
24. Beefhaus.
23. South Dallas Cultural Center.
22. Kirk Hopper.
21. Circuit 12.
20. Kettle Art.
Out of any space in the last six spots in these rankings, Beefhaus seems the most poised to move up quickly, thanks to an ambitious exhibition of performance and video art curated by Allison Star that's taking place this month.

19. Cris Worley.
18. Holly Johnson.
These two above galleries just opened new locations right next to one another — and, I must say, their new digs look great.

17. RE Gallery.
In my opinion, RE Gallery was the best arts space in Dallas in 2013. Wanda Dye has slowed down her pace a bit since then, but I look forward to seeing what happens with her newly launched RE Projects concept.

16. Mighty Fine Arts.
Steve Cruz has been holding it down with an excellent space in Oak Cliff since long before that notion became trendy or cool. His might be the most underappreciated space in Dallas.

14. UTD's CentralTrak.
This past month's show at CentralTrak wasn't my favorite. But even this spot's B-game is better than most's A-game.

13. Talley Dunn.
Talley Dunn is another space that gets taken for granted. But similar to The Reading Room, which I'll address shortly, this spot has been very good for a very long time.

11. Conduit Gallery.
Conduit Gallery is like the San Antonio Spurs of the Dallas art scene. Sometimes, their excellence can feel boring. But, at the end of every year, they're always on the short list for the title.

10. 500X.
I've never thought that 500X was quite as bad as some people have made it out to be in the past, but I will say that the new artists and energy in place here has the space feeling important again.

9. The Cliff Gallery.
Giovanni Valderas has made Mountain View's The Cliff Gallery the most important community college space in North Texas. Even more impressive? He's getting people from the Dallas arts scene to consistently make the drive out to actually see the work in person.

8. Erin Cluley.
I just really appreciate how great work looks in this new space. Erin Cluley clearly pays attention to the details — and she is just starting her stretch run of local favorites such as Cassandra Emswiler Burd (currently up), Kevin Todora, Zeke Williams, and Francisco Moreno (all upcoming).

7. The Reading Room.
It's sometimes easy to take Karen Weiner's small space for granted. And, frankly, there are still many people who aren't quite sure where The Reading Room is. But this past months featured yet another smart and interesting show, this time courtesy of Carolyn Sortor.

5. Cydonia.
I love the international ambition of this space — not to mention the fact that Hanh Ho and her assistants are clearly looking at every show in Dallas so as to better learn the scene and improve upon it.

4. RO2 Downtown.
Had anyone asked me, RO2 would have gotten my vote for most improved Dallas gallery of 2014. The space spent last year been very consistent in providing quality shows that are both interesting and, let's face it, a bit odd. Their most recent show, Joachim West's “Mother Earth is a dirty whore,” which closed with performative political campaign stump speeches by West and Thor Johnson for the role of Dallas Art President, is a great example of makes RO2 a must -see.

3. Goss-Michael Foundation.
The Goss-Michael Foundation continues to lead the way in institutional support of Dallas-based artists. This time around, they're using their main space to support exhibitions by Jeff Gibbons and Jesse Morgan Barnett. Both shows look beautiful in the space and will be available to view until March 10th.

2. McKinney Avenue Contemporary.
The Dallas Medianale has been centered at the MAC, and it's another strong example of how scenes that have existed for years on the underground are now taking a larger stage. Michael Morris, in particular, has been making and curating avant garde and experimental film performances for a while now, and I’m happy to see him, the Video Association of Dallas and all of the wonderful curators and artists here pushing the awareness, understanding and possibilities of these media forward. Don’t miss the last two performances of the Medianale on February 13th and February 28th.

1. Zhulong Gallery.
One of the best things about new galleries is that they have an initial burst of energy and risk-taking that can seemingly uplift the mood of an entire art scene. This was true in the early days of Oliver Francis Gallery, the first year of RE Gallery and the former Red Arrow and Circuit 12 corner on Dragon Street. In many ways, it is an act of faith and hubris to open an arts space, but I love the idea of anyone who scans the landscape, decides they can contribute and takes their best shot. Zhulong Gallery is one such entity — and, perhaps as a result, they just hosted the best solo show in Dallas in recent memory. That would be the space's video and sound installation works from Lauren Woods. Seeing Woods' images about both movement and movements, the impeccable presentation and the layeredness of meaning and interpretations made me proud to be working in Dallas. Gallery director Aja Martin is proving that she consistently knows how to curate the type of smart show that would be good in any market. And, at this very moment, Zhulong is the best-equipped space in town for showing digital- and technology-focused art in the city. It's just a great example of what a cutting edge commercial gallery space looks like.