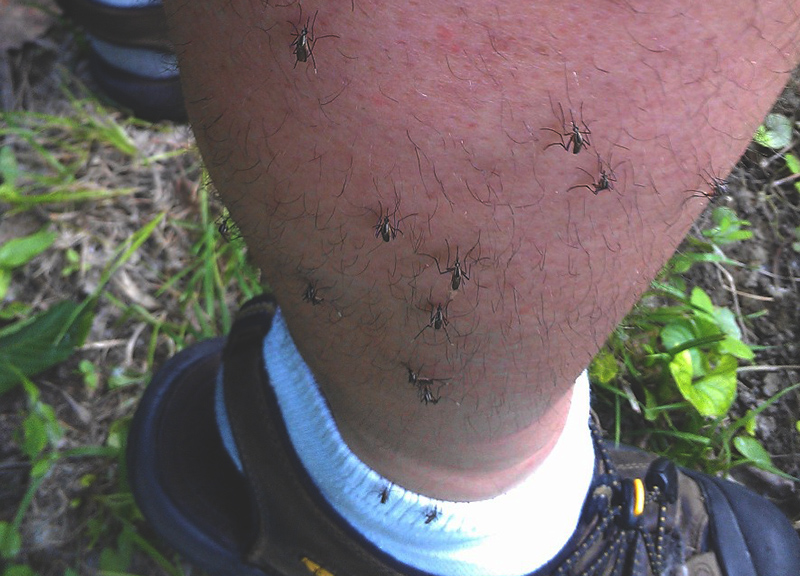 We Talked To A Guy That Got 900 Mosquito Bites. In One Day. On Purpose.

Mosquito Steve wasn’t born with designs on taking over the pest repellent industry.

In fact, it wasn’t all that long ago that the 55-year-old North Texan was simply a man named Steve Moore with a gig in the remodeling industry. But after doing some work in the noticeably mosquito-free backyard of a client who’d recently installed a multi-thousand-dollar mosquito misting system, he found his true calling — and discovered something of a superpower in the process.

For reasons he’s not quite sure, Mosquito Steve doesn’t get all that bothered by a few mosquito bites. He doesn’t get the big, swollen and irritated bumps. And even when he is bit. he just takes a hot shower and he’s more or less OK.

So, realizing the uniqueness of his situation, Steve decided to put his powers to use for good, becoming the first Dallas-based seller of mosquito misting systems while helping to create a more affordable, portable misting system and developing his own completely natural repellent, which he’s tested exhaustively on his own body, including one session in which he withstood over 900 bites in a six-hour period.

After hearing that story in particular, we just knew we had to track down this hero among men to learn more about his world. Here are the most interesting things we learned during our chat.

In Mosquito Steve’s eyes, the record-breaking rain we’ve been experiencing of late will likely lead to a record-breaking year for mosquitoes, too: “If we didn’t get any more rain the rest of the season, then it would probably level out to normal. If we continue to get a normal summer, then I think this will be a really bad year for them. [But] the mosquitoes actually came out earlier this year. Last year, we didn’t see mosquitoes until June. This year, we were making sales in February. That never happens. Usually that’s way too early. This year all the elements came together. It was a perfect storm… The West Nile virus [also] showed up early this year. Usually we don’t have indications of West Nile virus until July. This might be a West Nile virus year.”

Once you get infected with West Nile — as Steve has been — you’ve always got it: “It’s cyclical. Usually, you’ve got about a three-year cycle for West Nile virus. It’ll be really strong one year, then you’ll get a few years without. They actually don’t know why that is right now… In 2007, I was doing a bunch of testing, and I was taking a lot of bites. I had as many as 900 bites doing a control count. We were breeding mosquitoes, and they were so numerous, I was just getting pounded. I’m pretty sure that’s what happened. I got to where I just couldn’t get out of bed. I had to stop testing. That’s the first time anything has kept me from testing. It was pretty bad for two months. I was sick for about two months, and then I haven’t had any other effects. Last year, for about one week in the middle of June, I had flu-like symptoms for no reason — the flu wasn’t going around or anything — so I think the symptoms came back for a little bit, and then they went away.”

Not much is actually known about West Nile, turns out: “The thing about West Nile is, it usually affects older people or those with weaker immune systems or small children… What we don’t know, because it hasn’t been around long enough, is if, when I turn 80 or 85, will the effects then be stronger? It just showed up in America in 1999. It hasn’t been around that long.”

What it’s like to be bit by 900 mosquitoes in one night: “We were at a house in University Park. The mosquito counts were actually low, so we decided what we’d do is — they were having their house remodeled, and they had all these water features, waterfalls and ponds and stuff in the back — we’d unplugged them all so the water would stagnate. We literally bred mosquitoes back there. We would walk into the backyard, and you’d see a cloud of mosquitoes lift up from the water. It was just amazing. They were literally landing on me so fast, I couldn’t count them… We had to do a control count, and during that control count, I had over 3,500 [mosquitos] land on me over a six-hour period. I’m just assuming I had at least 900 bites. I probably had closer to 1,500. I’m very fortunate because, normally, the effects of mosquito bites don’t last long on me.”

Lab tests don’t mean shit: “I don’t enjoy [getting bit]. I’ve got to tell you: It’s not fun. I don’t go, ‘Oh boy! I get to do to testing!’ Usually, the days that I’m going to go do testing that night are very depressing. It’s really painful. But it’s the best way to tell if a [repellent] is good or not. Most products are tested in a lab. I can kill mosquitoes with lemon juice in a lab. I can kill ’em with water in a lab. So results from labs are not very accurate when it comes to mosquitoes. That’s why I do the human landing leg count. That’s the way to tell if a product works or not.”

What you should do if you’re bitten by a mosquito: “Normally what I do if I get a couple of bites is I go put hot water on them. I guess what that does is open the pores so it can drain out. So I put hot water, then I put something like Cortisone on top of it. That usually takes care of it. [After a mosquito testing, I’ll] go home and I get in a hot shower, and I hit my legs with the hot water and it goes away pretty quickly. That’s why I say I’m pretty fortunate — because I know people that, if they get a mosquito bite, it swells up and causes them all kinds of problems. I’m very fortunate. I don’t want to sound preachy, but I do think that things happen for a reason, and the fact that I can stand mosquito bites and I can take it, it’s one of the reasons these opportunities for me have come up. I think that’s why I’ve been able to test all these products. I’ve tested my products, but I’ve also tested others: I’ve tested DEET; I’ve tested toxic stuff: I’ve tested all the natural products that are out there. So, that way, I know I can compare my products with theirs.”