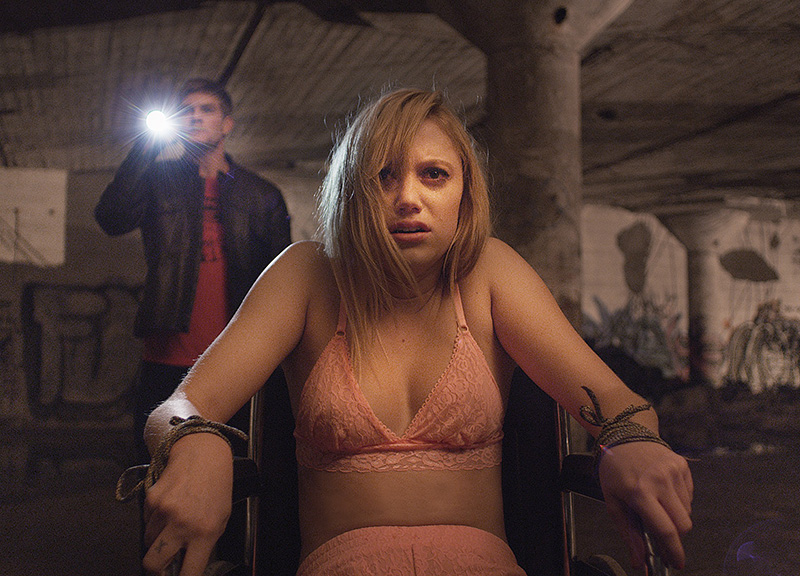 Look Out, Every Other Film Fest In Town: The 2014 Lone Star Film Festival Ain't Messing Around.

No bones about it: Around these parts, the Lone Star Film Festival has always played second fiddle to the Dallas International Film Festival, our region's most favored festival.

But, see, that might not be the case for much longer. I mean, sure, DIFF has had some good runs over these last few years — especially when that festival was a part of the AFI brand — but LSFF's stunning 2014 lineup is sending a loud and clear message to DIFF and other area film festivals alike.

That message? Move bitch, get out the way.

Allow me to explain. Already, LSFF has announced the full lineup for its 2014 offering, which formally kicks off its screenings next Wednesday. Among those are a few films with big stars, sure. But, more important, the 2014 slate offers more films with no-name directors, no-name casts and a promising storylines — or, y'know, just the kinds of films that, with a little luck, could leave an imprint on your big, beating, film-adoring heart.

Here's the blunt truth about film festivals: The best ones aren't the ones that rely on big names, but rather the ones that take on underdog productions and makes you fall in love with them. This is why I love Austin's Fantastic Fest so much. The ambitious leaps of faith that Fantastic Fest's organizers take in their crazy lineup full of movies are unlike anything you'll see anywhere else.

And LSFF 2014, I'm stoked to report, appears to heading down this same path. It's looking right past the bold-faced names and focusing instead on the kinds of films that deserve your attention and otherwise might not receive it. It's just a brave move on LSFF's part — and one that's paying dividends, at least in my book. Looking at the festival schedule, I counted 17 films that I'm going to try to see — a smashing figure for a five-day-only fest.

Of course, I don't expect everyone else to be able to join me in lining up for all of these screenings. I'm my own breed of crazy. But, that said, there a number of films that you really should be doing your best to catch next week.

Here, I'll give you the skinny on eight of them.

Winter Sleep.
One of the films I'm most looking forward to at LSFF is the 2014 Cannes Palme d'Or winner, Winter Sleep. If you don't know what the Palme d'Or is and why the fuck you should care, here are a few of the past winners you might know: Martin Scorsese's Taxi Driver, Francis Ford Coppola's Apocalypse Now and Quentin Tarantino's Pulp Fiction. Last I heard, those three directors went on to have successful careers as filmmakers. And this one, it should be noted, has been tapped as Turkey's submission as a potential nominee for the Best Foreign Film category at the 87th Academy Awards. (Those nominees won't be revealed until January, but Winter Sleep appears a safe bet for a nomination, if not for the all-out win). Anyway, all that awards mumbo jumbo aside, the plot is what really sells this film. Winter Sleep is about a former actor who's now running a hotel in Anatolia. When winter hits — and hits hard — the hotel becomes a place for refuge. Among those in need is the hotelier's sister, with whom our lead doesn't exactly have a great relationship with. As the snow keeps this group grounded in a confined place, frustration and tensions begins to take over. Does any of this sound kind of familiar to you? Maybe you've seen that one movie starring Jack Nicholson and Shelley Duvall, and directed by Stanley Kubrick? I could be way off with this comparison, but let a boy dream, OK?

The Babadook.
The Babadook has been labeled by many of my colleagues as “really fucking terrifying,” and that's always nice to hear. Better yet, it's always nice to watch a scary movie that purportedly also a brain, and this one apparently has a big one. As for the plot, Bababook is about a single mother who's nursing her son and tackling some bad memories about the violent death of her husband. Shit hits the fan when her little one thinks he's starting to see a monster and things start to go bump, bang and crash in the night.

It Follows.
The best thing about film festivals is walking into a movie completely blind, and this is the LSFF most primed for that experience. Just know this: Critics can be pretty harsh on horror films, but this one is currently sitting at 100 percent on Rotten Tomatoes with 15 reviews. That's really impressive.

Mr. Turner.
Mike Leigh has churned out some great films — Topsy-Turvy, Secrets & Lies, Vera Drake, Happy-Go-Lucky, Another Year, Naked and Life is Sweet among them. In short, he's a brilliant director, and his films dazzle. His latest, Mr. Turner, releases in the states in December, but you and I get the pleasure of seeing it before most folks thanks to LSFF. Boo-yah!

The Great Invisible.
The Great Invisible is only Margaret Brown’s third documentary, but she's already established herself as one of the most respected documentarians in the industry. Why? Because she treats the people she's filming as actual human beings and not just subjects, which is, unfortunately, something few filmmakers are ever able to achieve. Considering all the praise she's receive from the people in this film and those who helped make it, she clearly once again flashes her abilities this in The Great Invisible. While Brown may be invisible in this film about the real-life repercussions of the 2010 Gulf of Mexico oil spill, her presence is clearly there.

Zero Motivation.
LSFF describes Zero Motivation as M*A*S*H meets Orange is the New Black. And, well, since Robert Altman (director of M*A*S*H) is my favorite director, that's is all I need to lead me into the theater. I'm also all about a movie about a slacker. Zero Motivation follows three young female soldiers in a remote Israeli desert outpost, with two of them bored as hell and spending much of their time singing, playing video games and whatever else bored-as-hell people can do with limited resources. The third wheel has bigger ambitions in the military, which makes the three clash.

Wild.
Reese Witherspoon is a rarity in Hollywood. Why? She started acting a young age and has maintained a high profile since. She hit her high with Legally Blonde in 2001, got an Academy Award for her portrayal of June Cash in Walk the Line, and then her career started to dip. But apparently she got her groove back with Wild, directed by Jean-Marc Vallée (Dallas Buyers Club). In this memoir adaptation, she portrays Cheryl Strayed, a careless, real-life drug addict who kicks her habit by embarking upon a healing, 1,100-mile solo hike.

Low Down.
There are two actors who could star in anything and still impress with their performances: Michael Shannon and John Hawkes. Put one of these two in Gigli 2 and chances are high that I'd somehow be mesmerized. Fortunately, I'm not these guys' agent, otherwise Hawkes might not have ended up in Low Down, the first feature from cinematographer Jeff Preiss. This name rings a bell if you're a Bruce Weber fan; Preiss shot his documentaries Broken Noses, Let's Get Lost and Chop Suey. Low Down seems to be loosely based on Let’s Get Lost, , which is about Chet Baker, the acclaimed jazz trumpeter who died of an apparent heroin and cocaine overdose. Low Down, on the other hand, tells the story of the fictional Joe Albany, a popular, drug-addicted pianist from the 1960s jazz boom. The story is told through the perspective of his daughter (Elle Fanning), who watches his struggle with the disease while maintaining success.