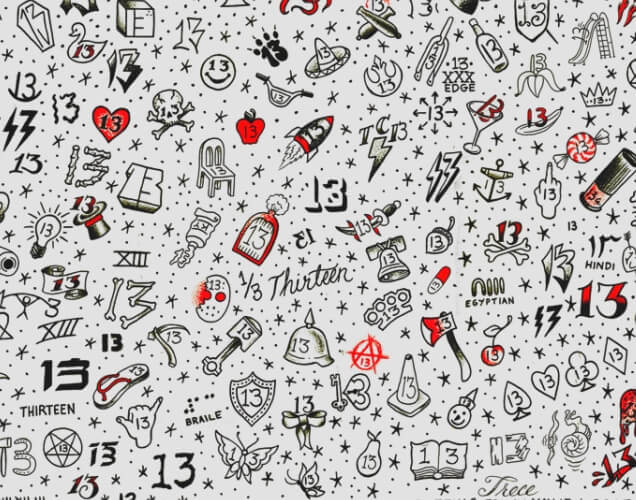 The Biggest Marathon In Elm Street Tattoos’ History Is Also The Most Laid Back.

Getting a “13” tattoo during one of Elm St. Tattoos’ regular 24-hour Friday the 13th marathons is unlike the experience of getting tattooed under almost any other circumstances.

Most years, the experience goes something like this: Interested parties start lining up in front of Elm St. well before the shop opens its doors at midnight, eventually stretching down the block and often well past Cafe Brazil; then folks start being ushered into the shop a handful at a time, where roughly a dozen artists are busy cranking out as many “13s” as they can as fast as they can.

It is most definitely a numbers game. That’s no knock on the shop; when 300-plus would-be clients are all clamoring for work the same day it has to be that way. But, in the end, that long-ish wait and chaos of fighting through the crowd, most would agree, is kind of what makes the whole ordeal a worthwhile and memorable endeavor.

So it would stand to reason that this year — on the 20th anniversary of the first Friday the 13th that Elm St. Tattoo co-owner Oliver Peck spent tattooing the now legendary mark, and, perhaps more importantly, the 13th year of the shop’s traditional 24-hour marathons — Peck and Co. would find a way to make their little corner of Elm Street more chaotic than ever. And by throwing their first three-day/four-night music and tattoo festival — which we’ll remind you takes over four Deep Ellum venues with festivities that include live music, skateboard demos, a Harley Davidson expo and, most importantly, a tattoo convention that includes 50 of the world’s top tattooers — it’s more than apparent that this year’s lone Friday the 13th was without a doubt a huge one for the shop.

Here’s the thing, though: While we’re in no way downplaying the enormity of the weekend’s goings-on, all that additional manpower, more or less, has thus far eliminated the chaos-factor from the marathon portion of the convention entirely. Despite constantly being told that requesting a specific artist was out of the question, we didn’t find this to be the case during the marathon’s typically ultra hectic first few hours last night. In fact, unless your heart was dead set on having Peck — whose first hour of tattoos were being filmed for Spike’s Ink Master reality show, and who had a steady throng ready to wait two to three hours to get their ink specifically from him — one could pretty much walk up to television personalities like Chris Nunez and Tim Hendricks and/or any number of the world’s top tattooers and get a tattoo with little to no line at all.

That was certainly the case for Portland-based artist Tyson Arndt, who previously gave me my first “13” tattoo in January of 2012. Nearly a half hour after the Prophet Bar opened its doors for this year’s marathon, Arndt told us he’d yet to do a single tattoo. By comparison, Arndt did 125 “13s” during one of last year’s marathons — an average of over five tattoos per hour.

To hear Arndt tell it, he kind of prefers it this way, though: “I get to take my time and do it right,” Arndt said while giving me my second “13” tattoo. “Normally there’s a bunch of people staring at you and me, wishing I’d hurry the hell up.”

A few hours later, a still-not-swamped Arndt took the time to get the toes on his right foot tattooed by world renowned artist Thomas Hooper.

Nearby, we found Argentinian artist Rana Almiron Instagramming a picture of a twenty dollar bill.

“Benjamin Franklin,” Almiron said. “The first dollars I’ve ever made working in the U.S.”

That’s when it occurred to me: In a roundabout way, Peck had achieved his goal of making this year’s lone tattoo marathon special. When one considers the opportunity at this year’s convention to have a more relaxed tattoo experience, the chance to handpick the artist of one’s own choosing and, above all, the ability to converse with well-known artist like Almiron, who literally never come to Dallas usually, this year’s marathon is unlike any that’s come before.

And, despite the fact that people all over the world will now be getting “13” tattoos today as countless shops around the world have now copied Peck’s model, we can’t imagine a place more appropriate to get one than the shop that started it all.

“People all over the world get 13s now,” Arndt said. “And they have no idea why they’re doing it.”

It’s a fact that Almiron attests to firsthand: “They do it in Argentina,” Almiron said, agreeing that nobody down there is quite sure exactly why they do it either.

But for folks like Arndt and the masses that congregate in front of Elm St. Tattoo every Friday the 13th, the answer to that one’s easy.

Said Arndt: “It’s all because of Oliver.”