A Disturbance In The Force. 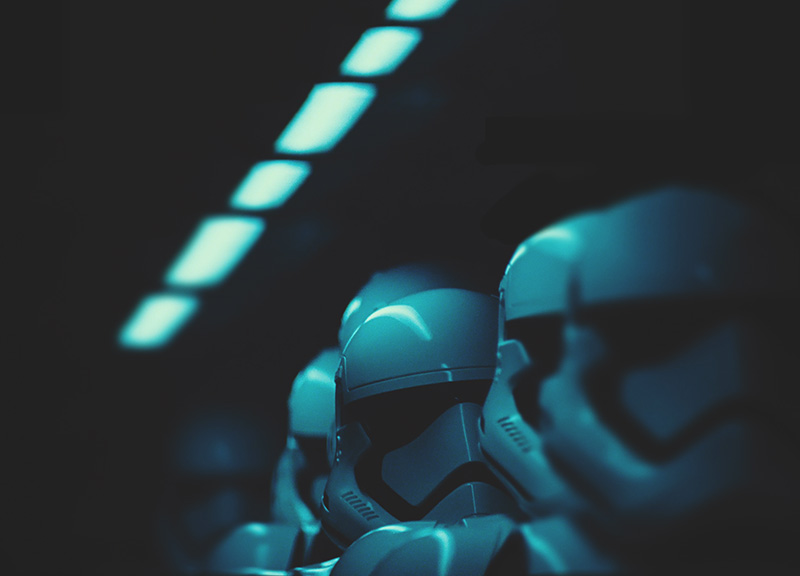 Our Critics Gather For An Anticipatory Star Wars Round Table Discussion.

So there's this little movie coming out next week called Star Wars: The Force Awakens. Maybe you've heard of it?

If not, what rock have you been living under? Between all the commercials, promotional tie-ins and stars making the interview rounds, it's going to be tough for anyone to really go into this movie without knowing a thing about it.

Maybe that's to be expected of one of the most anticipated movies of the year, though. That in mind, we gathered out film critics together for a round table discussion about their Star Wars expectations and anticipations — or lack thereof. Here's what they had to say.

Angela Jones: We're getting closer and closer to probably the most anticipated movie of the year, and it seems as if there's another promo, interview or hidden Easter egg that the Internet needs to break down and analyze to death each and every day. I've gotta say, it all feels a little tedious. I'm personally very excited for this film, if just for the energy the theaters will have. But I am getting weary of all the pre-movie hype. I'm keeping my skepticism about the plot and I feel better that the film is out of George Lucas's hands now, but… it's Star Wars. Disney could have not released anything and this film would still make and break movie records. It's almost a detriment to the film that there's so much saturation in the media; it's going to feel tiresome once the actual movie premieres. That's a lot of hype to live up to. How do you guys feel about all that?

Kip Mooney: My excitement is wholly organic in that I want to see it based on the track records of J.J. Abrams and the fact that he's assembled an extremely talented and diverse cast to bring this next chapter to life. I was fairly obsessed with Star Wars as a kid, but my fandom definitely wore off as I got older. I don't think I've seen any chapter of the saga since high school. And yet I'm pumped to see this one all the same — to a degree. I don't care about seeing this one as early as possible. If I can't get a ticket to see it until the Monday or Tuesday after it comes out, that'll be just fine by me. Personally, of all the tidbits that have been released like clockwork, the most interesting to me is that this movie will only run about two hours. Far too many Sci-Fi and fantasy films have become far too bloated in recent years. My wife was watching the final Hobbit movie earlier this week and it felt like it was never going to end. I'm all for a lean film that knows not to waste a single moment, and that's what I'm hoping for with The Force Awakens. That's more important to me than its “faithfulness” to the legacy.

Javier Fuentes: To be honest, I'm pretty tired of the hype, too. But I think I'm annoyed for different reasons than you guys. The marketing of the movie hasn't been that intense. I mean, the trailers haven't really shown too much footage since the first trailer got released. So we don't know much about the plot at all — although, if you look hard enough, you can definitely find some rumored synopses. What I am getting tired of is all of the licenses. I don't care about needing batteries for my toy light saber, and those are the things that are getting grating. Not only that, but Star Wars fans might be the most annoying this side of Steven Universe fans. The fans are completely deluded and have drank all of that J.J. Abrams Kool-Aid. I mean, just read that piece on io9 about that manchild whining that he wasn't able to buy any toys of characters we have zero context on when he went out shopping on Black Friday. Keep in mind: This is all just the culture surrounding movie. The actual movie itself really worries me, too. As we all know, Lucas began Star Wars as a Flash Gordon update with a little Hidden Fortress tacked in for good measure. Those movies and the stories they were based on were total archetypal “hero's journey” movies with clearly defined roles of “good” and “evil” and how good will triumph over evil. Everything about this movie seems to thematically disregard everything that was set up in the previous movies with this whole world where the Rebellion didn't actually win and the Empire survived. I get that, logically, it makes sense that the explosion of Death Star II would not mean the end of the Empire — but that's not how Return of the Jedi made it out to be. The new movie appears to be a morally grey world where the protagonists didn't win — and that feels wrong.

Angela Jones: Javi, you mentioned how the trailers have shown very little in plot — so how can we assume that the movie is disregarding the previous films? I just don't think we can make that assumption yet because, like you mentioned, we haven't been shown that much of the plot. Really, I actually feel bad for the film. I bet, after its released, there will be two types of reviews — those that review it fueled by nostalgia from their childhood, and those that review it with a shrewd eye. The Internet will revolt over those second reviews. Remember how there was one negative review about The Dark Knight — or was it Rises? I can't remember — that made the movie drop down a percentage or two on Rotten Tomatoes, and the fanboys freaked out and started harassing the critic? Is there any way that doesn't happen here? I guess the saving grace here is that Star Wars doesn't have to worry because no negative review will steer away the crowds.

Javier Fuentes: I should've clarified. Most everything I was referring to regarding the movie's plot is from Heroic Hollywood. There's been some pretty interesting speculation and rumors on there — and most of it has turned out true so far.

Angela Jones: But it's all still speculation until we know for sure come later this week. And one thing I am excited about is seeing the movie on Thursday. It feels like the olden days where you had to run out and get tickets and line up hours beforehand. All the excitement of a midnight movie is cool — except I'm seeing it at 10:30, not midnight, and thankfully seats can be reserved now. Seeing Episode III was still one of my favorite movie-going experiences, even though we don't speak about those awful prequels. Just the anticipation and energy from everyone in the theater made it memorable.

Javier Fuentes: Now that you mention it, the special edition theater re-releases were some of my most memorable movie-going experiences, too. I remember that I had a bad cold, and I was home from school for a few days, but I made sure to come and see CGI Jabba the Hutt just the same. I can only imagine that, in our geek-centric culture, there's going to be a plethora of nerds dressing up in ill-fitting robes at this one. Going back to the movie itself, what intrigues me about Abrams is that, in all of the previous instances when he has taken over a franchise (read: Mission: Impossible, Star Trek), he's always been met with disdain for his product being too different from the source material. He made Star Trek into Star Wars and turned M:I into an Alias episode. I'm curious if he how well he'll do here.

Kip Mooney: At this point, I don't have any plans to see it on the Thursday, Friday or Saturday. The thing I'm most looking forward to this weekend, actually, is Tina Fey and Amy Poehler returning to Saturday Night Live to promote their new movie, Sisters. I feel like I'm the only one intentionally skipping out on opening weekend — and that's OK with me. This won't be an Avatar situation where I wait forever and catch it years later, though. I'll see it. But if I'm not part of what will be the biggest opening weekend of all time, that's quite alright with me. Of course, I will still light saber duel you two for the chance to be at the critics' screening.

Angela Jones: Duel accepted! You bring up a good point, though. Regardless of our feelings on the movie, The Force Awakens will for sure be a box office hit. Now, let's just hope the movie itself is good enough to make the masses return for the eighth and ninth one — let alone all of the spin-offs that are already in the works. Wait. No, none of that matters. The people will show up regardless at this point. We know that with all certainty at this point. Still, I can't wait to see everyone's reactions!

Star Wars: The Force Awakens opens… lol, like you don't know when.