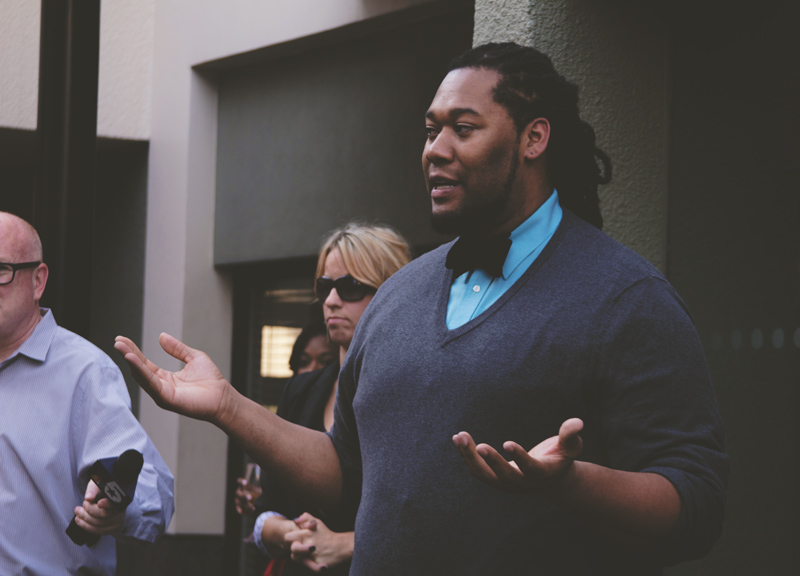 There was little action at Kung Fu Saloon as Wednesday turned into Wednesday night. Just a bouncer carefully resting his head on the railing out front, prepping himself for the small amount of people lining up to enter the establishment as part of the nighttime rush.

Really, the bulk of the action in Uptown at this hour took place elsewhere — and in response to said establishment's recently brought-int-question door policies.

Just down the street from Kung Fu Saloon, over at Momo's Pasta, there was a rally — one formed by Deandre Upshaw in response to the discrimination he believed he suffered at the hands of Kung Fu Saloon's doormen this past Sunday.

It was a protest — a response to Upshaw's belief that he was turned away from Kung Fu Saloon hotspot because of his race and not because, as the bouncers told him on that day, he was wearing high-top sneakers.

There was a huge response, too: Some 150 showed up to Momo's on Wednesday night in support of Upshaw's anti-discriminatory stance. A social media marketing professional, Upshaw deserves plenty of credit: Not only had he made his claims heard, but he'd rallied a passionate base behind him.

And, out on the patio of Momo's Pasta, in a shopping center hidden off the beaten path, but near Kung Fu Saloon, Upshaw rallied his troops and fielded questions from various area media outlets, all the while flanked by supporters of his cause and by people who'd suffered similar fates at Kung Fu Saloon.

He hardly stood alone. Among the crowd joining him was a woman formerly employed by that popular Uptown watering hole — Stephanie Guidry, who claimed to have previously served as an event coordinator at the spot. She told the gathered crowd that, upon her starting her job at Kung Fu in 2012, she had been told to follow a specific screening process for potential attendees at the venue.

“If someone contacted you with an ethnic last name,” she told the boycotters, “you called them on the phone to make sure they didn't sound ghetto, they didn't sound too Asian or [that] the party was going to sound gang-related.”

These, she said, were the explicit instructions given to her by her higher-ups.

But that was just the start. Another former Kung Fu Saloon general manager, she said, once told her that he didn't want his bar to be filled with “too many Asians.” And Guidry believes she was let go from her position for this exact reason — because she hosted a party for some Asian friends of hers.

“'Why are there so many Asians in line?'” she said her boss asked her on the day of one event. “'They're all asking for you.'”

A few days later, as Guidry tells it, she was fired.

And so Wednesday night at Momo's went, with multiple speakers sharing their awkward, race-specific experiences at Kung Fu Saloon.

But few were as incensed as Upshaw himself, who once again on this night shared with the public his own trials at the venue's door, explaining how he'd been barred from the spot as a result, he says, of wearing a pair of high-top Converse shoes.

“Tonight is our first step in saying we are done with it,” Upshaw told his crowd shortly after it had gathered at the event's stated 7 p.m. start time. “We are finished. No more saying that that your socks are too short, your eyes are too brown.”

His hope? That Kung Fu Saloon would acknowledge that it has been denying clientele based on race. But, more than that, Upshaw said he hoped that every establishment in Dallas would take notice — that they would now know that it's illegal to enforce a dress code without its rules being explicitly posted.

And Upshaw and Guidry were but a few of the people who on this night shared their beliefs that Kung Fu and other area bars were violating basic civil rights with their practices.

One local DJ proclaimed that he'd repeatedly been asked to change the music he played while working in Uptown establishments for fear that “too many black people” would show up. Another local nightlife photographer announced that he was told by his publication's editors not to photograph too many black people.

Still, the rally was largely calm, with Upshaw keeping the proceedings intact. Even when the idea of taking an in-protest walk past Kung Fu Saloon was floated and the audience cheered at the idea, Upshaw kept things in check, insisting that the walk would be made in silence and in peace.

Up at the front of that walk, Upshaw kept true to his word, too, silently carrying with him a T-shirt emblazoned with the now-popular hashtag “#NOKUNGFU” in silver letters.

As the protesters walked past Kung Fu Saloon, the scene here had changed: Two Dallas policemen stood perched near the bar's doors, standing before a bouncer who glared on.

The cops kept straight faces. But you could see the bouncer rolling his eyes.

Even so, the crowd remained peaceful as it walked on by Kung Fu and circled back to Momo's.

Upshaw's goal wasn't to incite a riot — and, thankfully, no such thing took place. He simply hoped to increase awareness of the racial issues that still persist in the city.

And, back at Momo's, he was confident that, on this night at least, he'd done just that.

“The city is being affected by these practices,” Upshaw said. “They're saying Dallas doesn't accept people of color. We don't want that.” 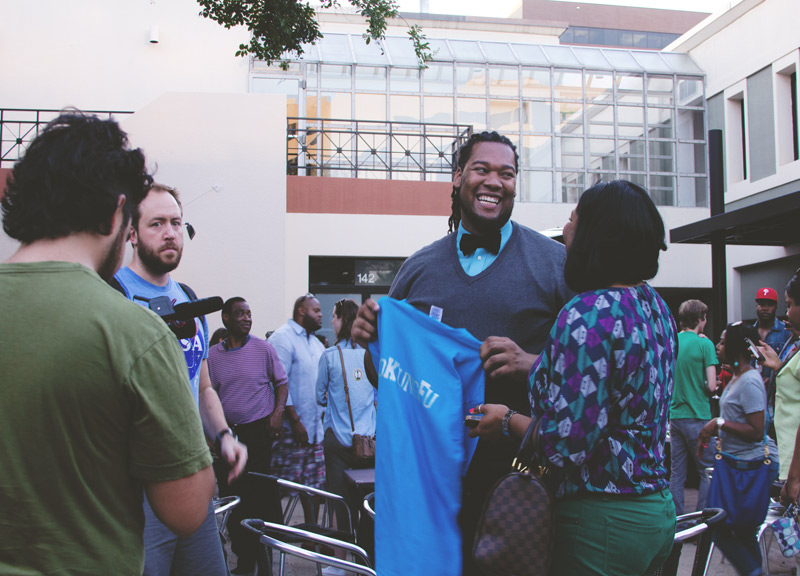 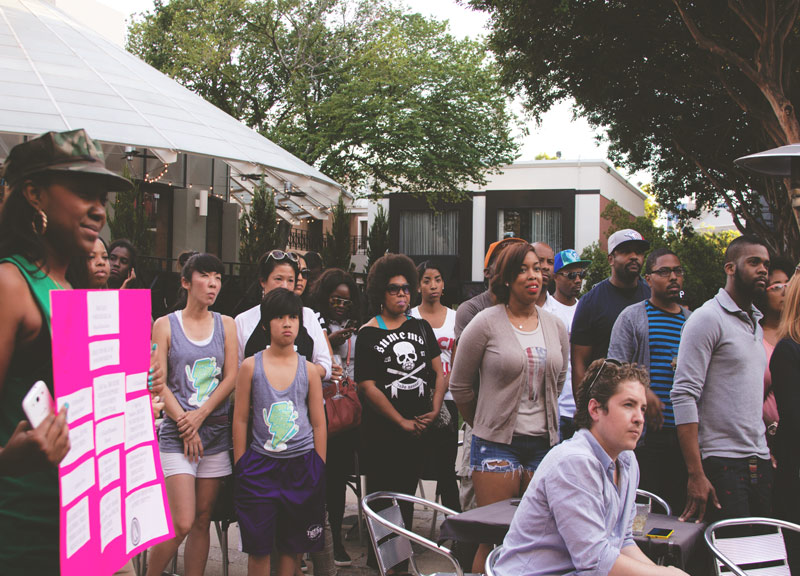 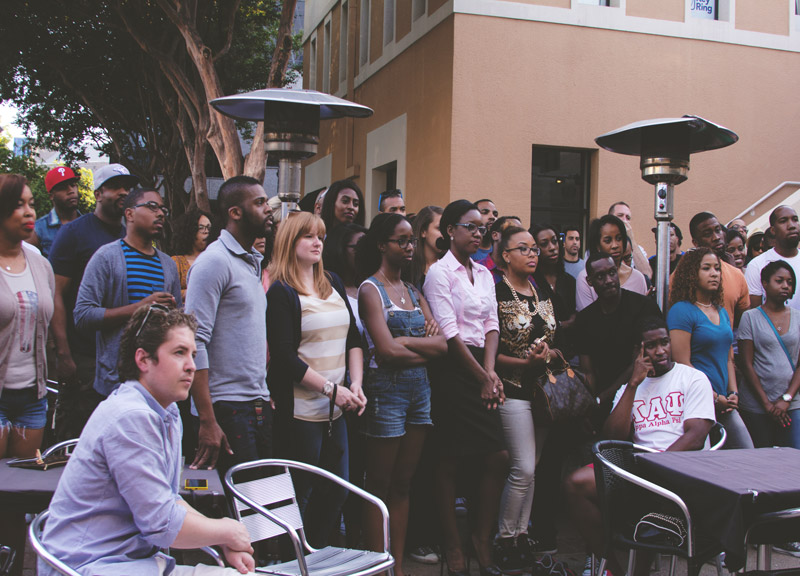 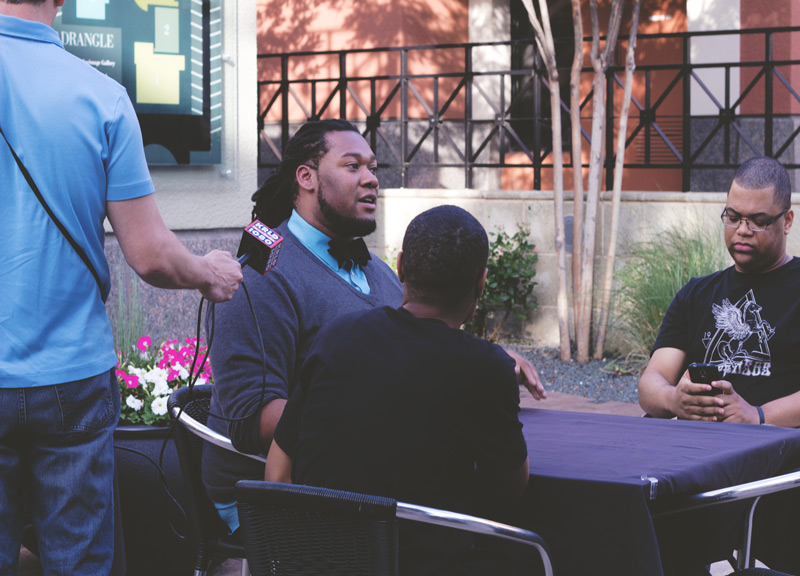 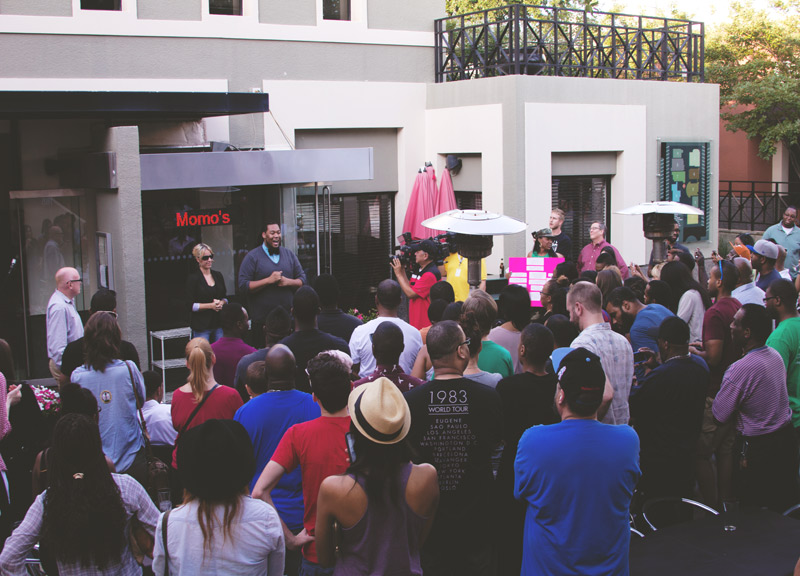 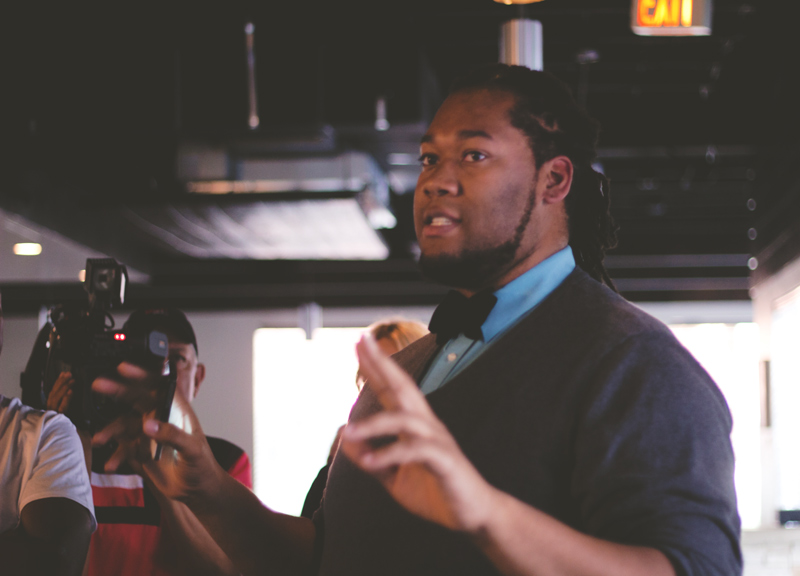 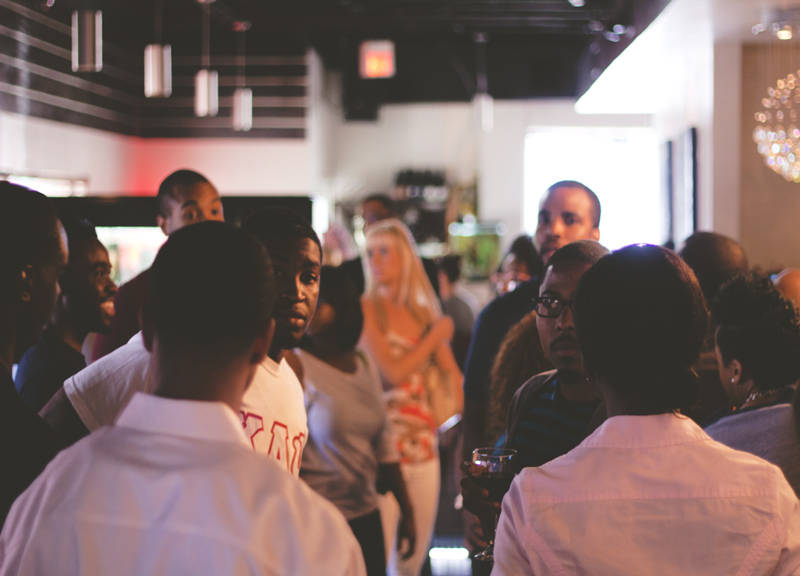 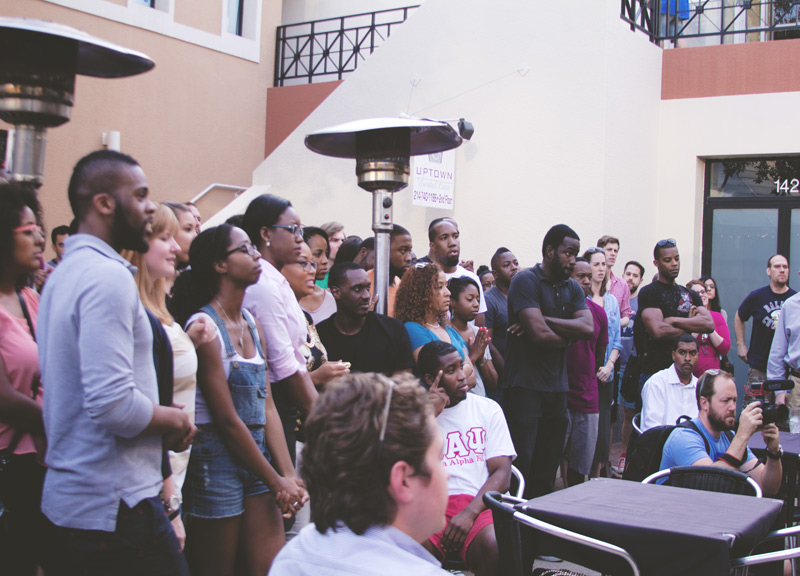 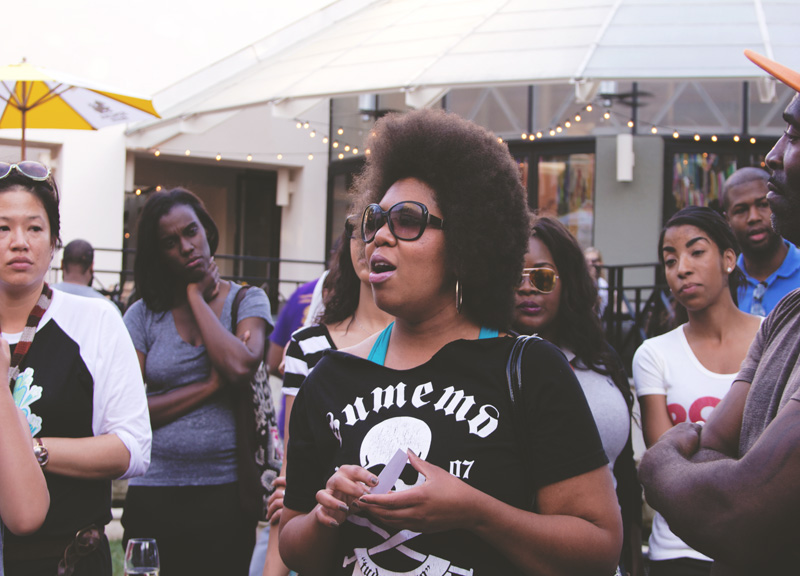 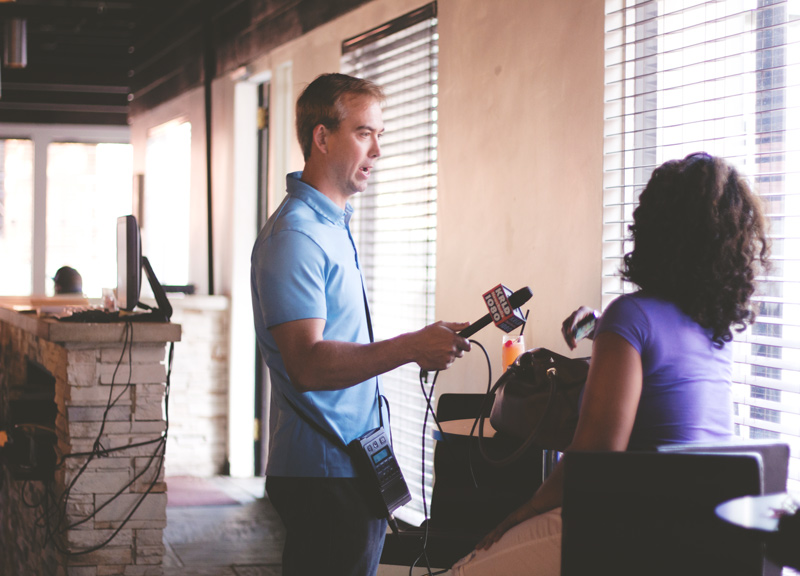 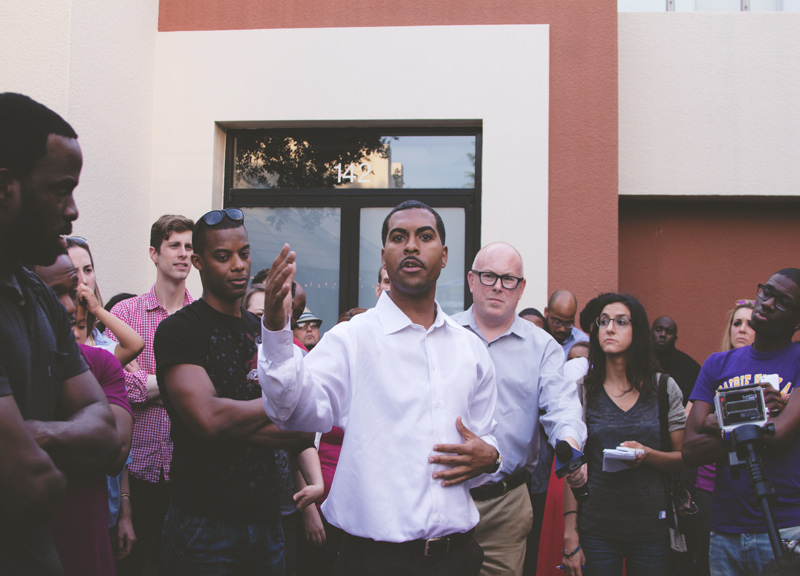 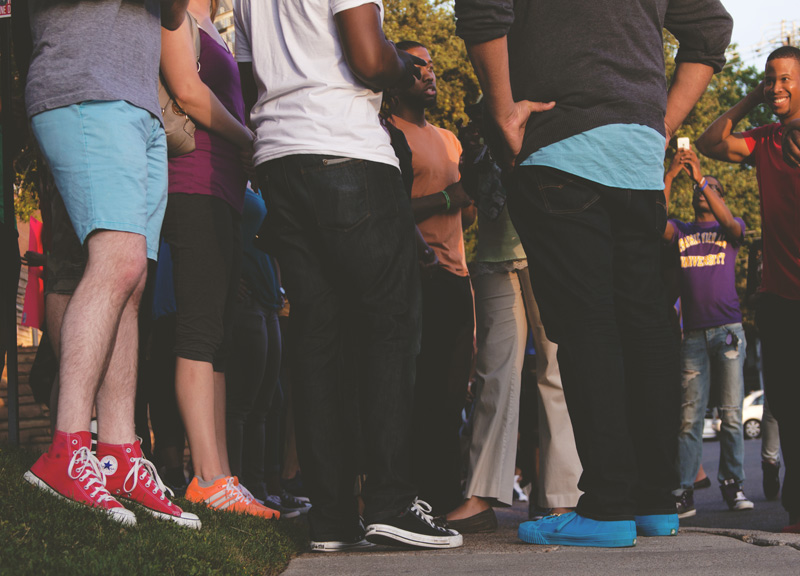 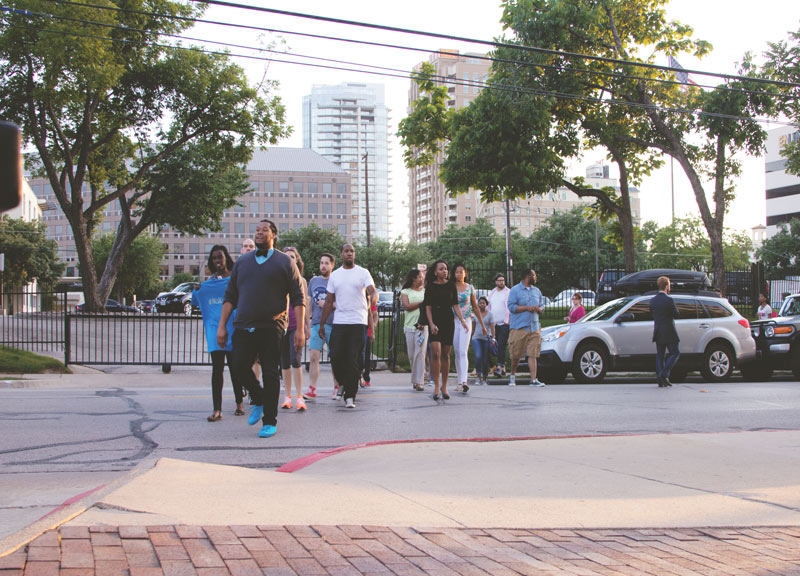 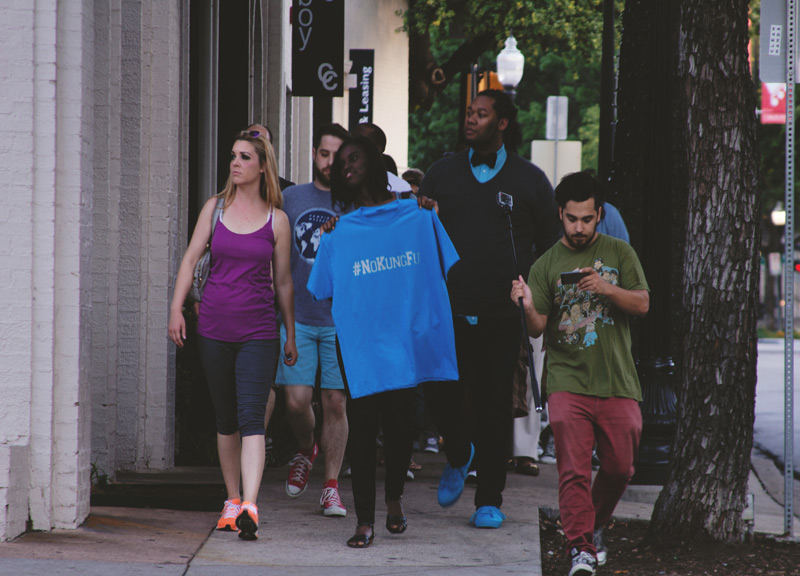 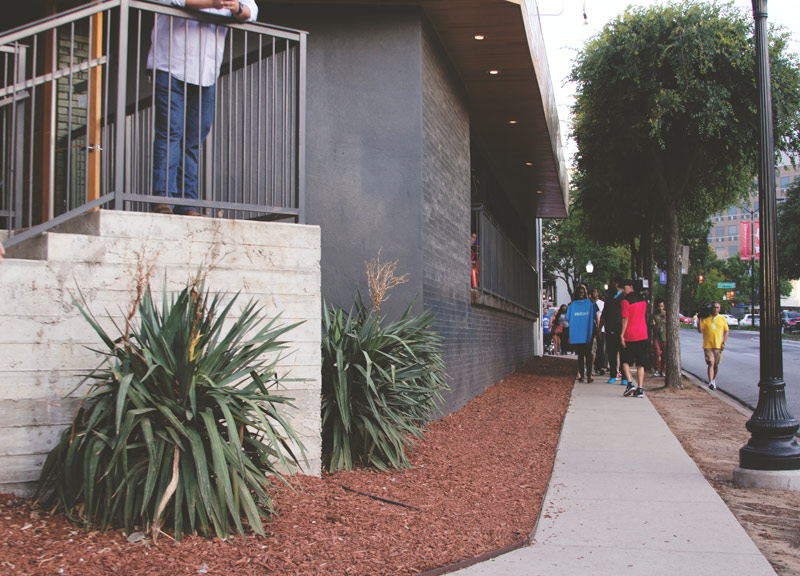 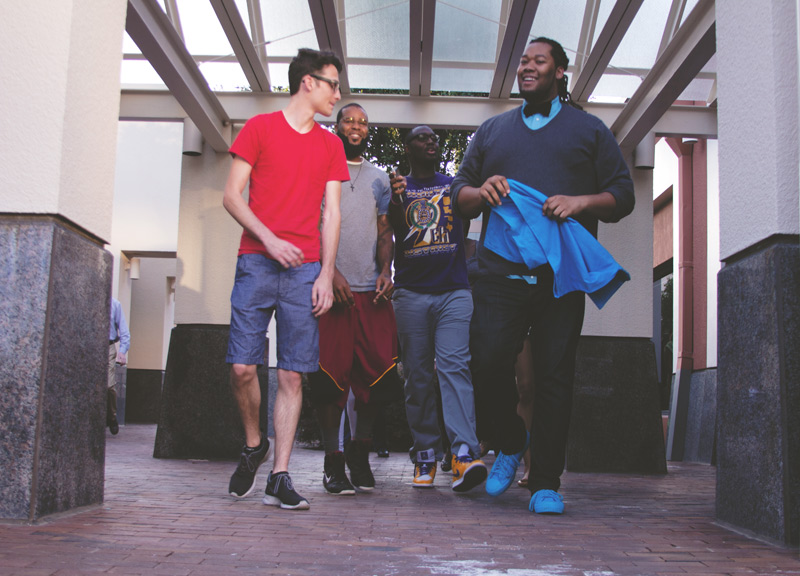 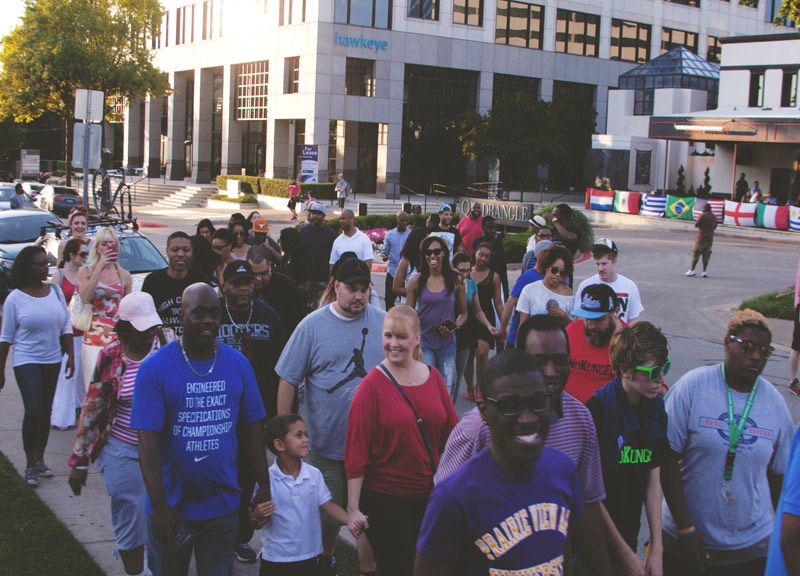 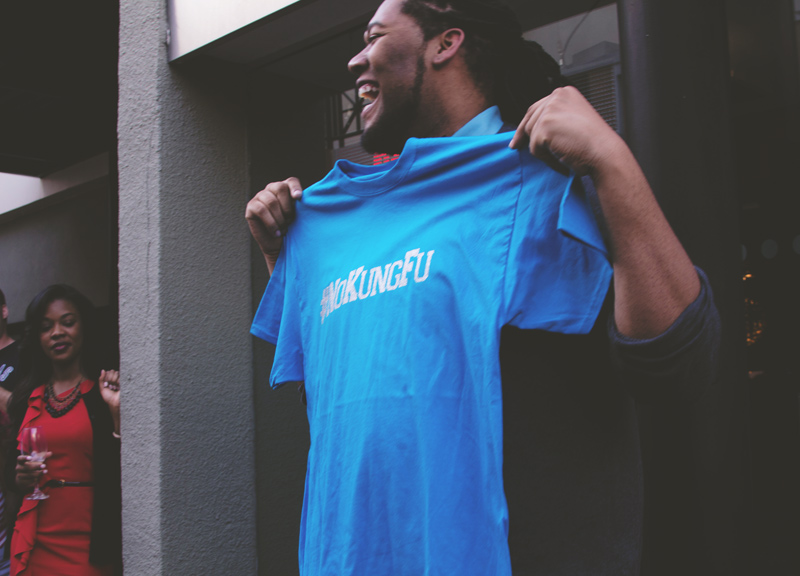