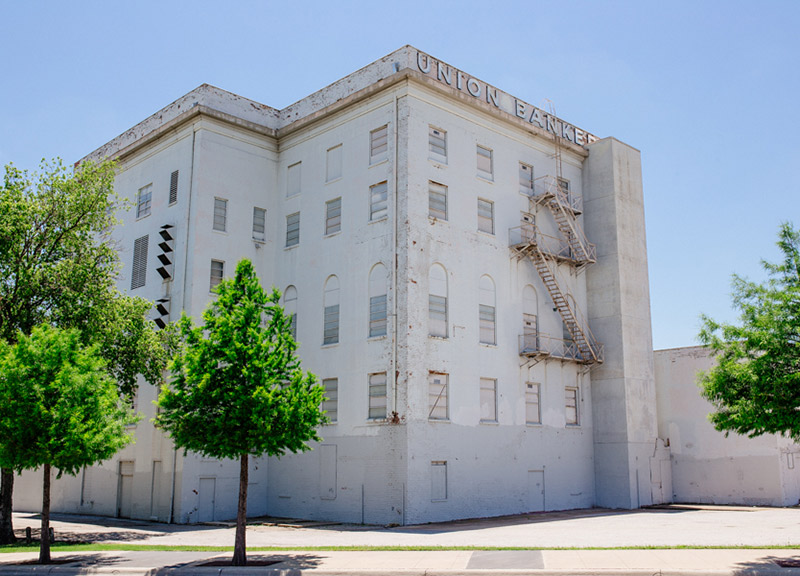 Deep Ellum or Bishop Arts: Which Of These Neighborhoods’ Developments Is More Troubling?

If you’ve driven around Dallas at all throughout this past year, you’ve surely noticed at least a few of your routes impeded by construction. Whether you’re stomaching the still-heinous reconstruction of I-635 on your way to work or vigilantly attempting to not bottom out your car on the road construction found all over East Dallas, the sheer amount of development going on around the region these days is fairly dizzying.

But, hey, don’t worry, because even more construction is coming to a ‘hood near you!

Over the course of these past few months, Dallas has added upwards of $100 million to proposed construction efforts in the enclaves of Bishop Arts and Deep Ellum.

In Deep Ellum specifically, we’ve already seen some of the fruits of these proposals come to life: On Elm Street, at least, the sidewalks are almost finished and the streetlights turn on; poppin’ new bars like Brain Dead Brewing and Cold Beer Company are jumping off; and the cavernously large concert venue The Bomb Factory is up and running. Yet, somehow, Deep Ellum has plenty more still coming: Even while you’re still struggling through the Elm Street construction that’s now seen its estimated completion pushed back to summer this year, there are more developments set to start place as soon as that’s finished.

For one thing? Once Elm Street’s done, then Main and Commerce will get their construction turns. Then there’s Westdale Properties, the company holding the leases to already-neighborhood-favorites The Bomb Factory and Cold Beer Company, and its further plans for the block at the intersection of Malcolm X and Main. Westdale’s thinking big: It wants to clean up the characteristic exposed brick look on the buildings at that intersection, and it hopes to add parking garages behind the Bomb Factory and across from the Prophet Bar, right next to the old Knights of Pythias on Elm, which itself is gearing up to become a mixed-use development.

Speaking of apartments aimed at wealthy renters: The Bishop Arts District and the rest of North Oak Cliff are having to contend with its own set of developments. The most prominent of these proposed developments is the Bishop Arts Village, backed by the father-son Nazerian duo. This proposed deal includes apartments tucked right at the intersection of Bishop and 9th that would be five stories tall, with the bottom floor being reserved for retail space. Fun fact about the funding of this project: The Nazerian’s couldn’t gather all the bank-backed funding they had wanted because the area’s median income is too low for the banks to justify details such as brick-paved roadways and buried power lines

It’s clear at this point: Deep Ellum and Bishop Arts are both in for huge face-lifts and expansions in the coming years. But, as with any change, we have to ask: Is this a good or bad thing? Well, that requires a lot of reading, and a strong understanding of all the infinitesimal details of boring real estate happenings — something most people probably aren’t likely to do.

But we are, especially if it means it helps us answer the following question: Who’s future looks worst, Bishop Arts or Deep Ellum?

So let’s get to it, taking an in-depth, point-by-point look at various elements involved in these developments.

Round 1: Housing. Bishop Arts and Deep Ellum both have more than a handful of housing development in the works at the moment. But what’s the state of each ‘hood before Mrs. and Mr. Deep Pockets move in?

Bishop Arts is but a tiny little strip in Oak Cliff, and though we all often colloquially use that strip to describe the North Oak Cliff neighborhood at large, it’s important to note that most of the homes surrounding the Bishop Arts District are mostly smaller, single-family homes. Don’t live there? Well, you’ve seen it while driving into this neighborhood on any given Saturday evening and are forced to spend 20 minutes looking for parking. The few number of apartments that do exist nearby rarely exceed two stories, and, when they do, they generally fit the decor of the neighborhood, which is to say that they’re older and are generally affordable to the lower-income brackets.

Deep Ellum, on the other hand, is dominated by multi-story apartments and lofts. For the purpose of simplicity, we’ll lump Expo Park’s many lofts into this madness. But even doing so doesn’t change much: Housing in this neighborhood hasn’t been cheap for some time, and it’s only been rising of late. Even the artists studios over at the Continental Gin Building have seen their rents rising, forcing artists who’ve worked there for years to find new spaces elsewhere.

The question at hand, then, is, when the new expensive apartments come in to these neighborhoods, which one really has it worse? The clear answer is Bishop Arts. This place, against all odds, has maintained it small, community vibe even as its relatively small commercial strip has become increasingly popular with higher-income individuals from other parts of town. But these multi-story, and in some cases multi-block, developments that are eyeing the neighborhood? They seem hellbent on kissing that neighborhood vibe and charm goodbye. Oh, you really like looking at all the small houses that line the street on the way to Eno’s? Well, prepare for some eye-sore apartments rising well above those pleasant old houses — places that seem destined to remind us all that, hey, much as we all say we don’t, we really do want the entirety of Dallas to look like Uptown’s West Village. Those developers really know what we want, don’t they?

Round 2: The People. There’s more to the culture of a neighborhood than its buildings. Its people count for a lot, too. So what’s in store for the future of these neighborhood’s crowds?

Well, let’s face it, Bishop Arts has been an oasis for young, white professionals with jobs for some time now. Is it super expensive to hand out here? No, not necessarily. But, make no mistake: Despite the fact that most restaurants and bars still fall in the mid-price range, this neighborhood has long been gentrified. The coming developments don’t really want to change that; they want to accommodate that, allowing the already-in-patrons of these business to live closer by. The problem is that some of the proposed developments are set to come at the expense of the very businesses that draw people to this part of town. But well-off young professionals will still eat these apartments up. So, no, we don’t expect any real change from what we’re currently seeing to the types of people you’ll see running around the neighborhood.

Deep Ellum, on the other hand, is already seeing real changes in the people spending money down there. On a recent Sunday afternoon trip, I saw more than a few things I thought I’d never see in this historically rough-and-tumble part of town. There were families walking around in clean-pressed shirts and pastel shorts, some of them on bikes. There were more than a few groups of what looked like sorority girls taking photos in front of Frank Campagna’s television mural on Good-Latimer. New spaces with generous outdoor seating were absolutely packed — during the day, I remind you. I even saw families riding bikes. Deep Ellum was once dead in the daytime, but, alas, no more. Now, granted, that’s an economic plus for the business owners already down there. But not all of it is gravy, because other are coming in and thrusting their own ideals onto the neighborhood: One new restaurant on Elm, for instance, charges $90 a person per dinner sitting. At this rate, we can expect the price of visiting Deep Ellum to just keep on rising.

Maybe I’m not exactly Scrooge McDucking my way through a pool of gold bullions myself these days, but I tend to agree with my wallet and eyes on this one.

Round 3: The Businesses. Perhaps no other factor has as much an effect on the culture and vibe of a neighborhood than the types of businesses that call it home. They’re what draw the people to the neighborhood and create its character.

For years now, the Bishop Arts District has proved itself an eclectic, safe area through its wide selection of businesses. The main strip is filled with charming boutiques and mid-price dining options. Just on the outskirts of the main drag, meanwhile, we have oases from that in places like Ten Bells Tavern and Zoli’s. Did we mention already the Alamo Manhattan development is being build directly where Zoli’s, Ten Bells and Local Oak are? We did? OK, good. Now, should we worry that the retail spaces coming beneath all these impending apartment developments won’t house similar spaces? Maybe! If the new retailers to the neighborhood include, say, The Gap or Anne Taylor, the real charm of Bishop Arts will be gone. But once an area’s already become gentrified, can it really get that much more so?

On the other hand, Deep Ellum, even as it undergoes its own resurgence, is still holding on, best it can, to the punk aesthetics it built up in the ’80s and ’90s. But some of that charm and character falling by the way side, no doubt. We’ve already seen it. Just this past fall, Murray Street Coffee came dangerously close to having to shut its doors. Then there’s the bizarre but ultimately endearing Eight-Track Museum, which did close. How long before businesses like Lula B’s or Leather Masters are endangered? If there’s one positive here, it’s that Deep Ellum’s developers say they want to keep look of the neighborhood in place, and are constantly assuring the public that Deep Ellum won’t look like Uptown.

Loser: Deep Ellum, if only because the changes seem larger and to be coming to pass more quickly.

Conclusions. Sure, Bishop Arts has a lot at stake. Its neighboring areas already appear on the brink of losing their neighborhood charms, what with Jefferson Street a few blocks over already under threat from development and the Belmont Hotel’s future suddenly uncertain after its recent sale.

But among these two hoods, each of which has its backs up against the wall at the moment, the everyday changes we’re most concerned about are the ones set to come to Deep Ellum.

As if it weren’t already expensive to live down there right now, those prices are looking to only rise in the near future. And with those rising living costs come rising social ones in the form of pricier food and drink options. Are there cheaper options available at the moment? Sure, but the thought of those places falling by the wayside just feels all too real.

Consider this: The most successful new businesses in Deep Ellum aren’t making their money on the late-night crowds that kept this neighborhood from going completely under during the dark times. The businesses coming into the neighborhood no doubt see that, don’t they? They have to. In turn, though punk might not be dead, its spirit is sure getting squeezed out of Deep Ellum isn’t it.

So, for those reasons, if we had to name the neighborhood with a bleaker outlook at the moment, we’d say Deep Ellum has it slightly worse than Bishop Arts. Although, again, neither situation looks all that great.

Here’s to enjoying these neighborhoods while we still can — and can still afford to — I suppose. Here’s hoping, too, that it’s just our fear of change that’s getting the best of us here.

Because, hey, who knows? Maybe these developments won’t be so bad!

Eh, who we kidding? They probably will.