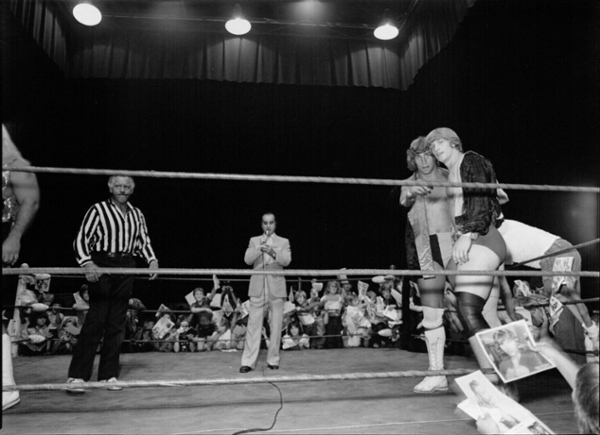 That familiar glass-shattering sound came over the P.A., the power chords boomed and last night, for the first time in four years, Stone Cold Steve Austin came down the aisle during a taping of WWE’s Monday Night Raw.

The first words out of his mouth when he got to center ring? A shoutout to his humble beginnings at wrestling Dallas’ long-gone Sportatorium back in 1989.

Can I get a hell yeah?

Yes, Texas — and Dallas, in particular — has historically had a big impact on the wrestling world — from the Von Ehrics to the dozens of other pros that got their start at the Sportatorium and even to the birth of rock and roll entrance music itself.

All that history is currently on display in a new photo exhibit called “Ringside: Memories of World Class Championship Wrestling,” which features Ciffus Bonneau-shot photos taken at Fort Worth’s Will Rogers Coliseum own Monday night wrestling series throughout the ’80s. The free-to-attend exhibit is located at the UT Arlington Central Library (702 Planetarium Place), and will be on display through January 16.

The exhibit’s curators, like UTA history professor Oliver Bateman, hope the photographs of wrestling’s regionally-flavored past will introduce new fans to the sport and reignite a passion from fans from back in the day before WWE’s biggest event of the year, Wrestlemania 32, attempts to set an attendance record at AT&T Stadium next April.

And who knows? If those rumors of a Stone Cold and Brock Lesner main event do come to fruition, a Texan might find himself at the center of wrestling history once again.