45 Things To Do In Dallas This 214Selena Weekend. 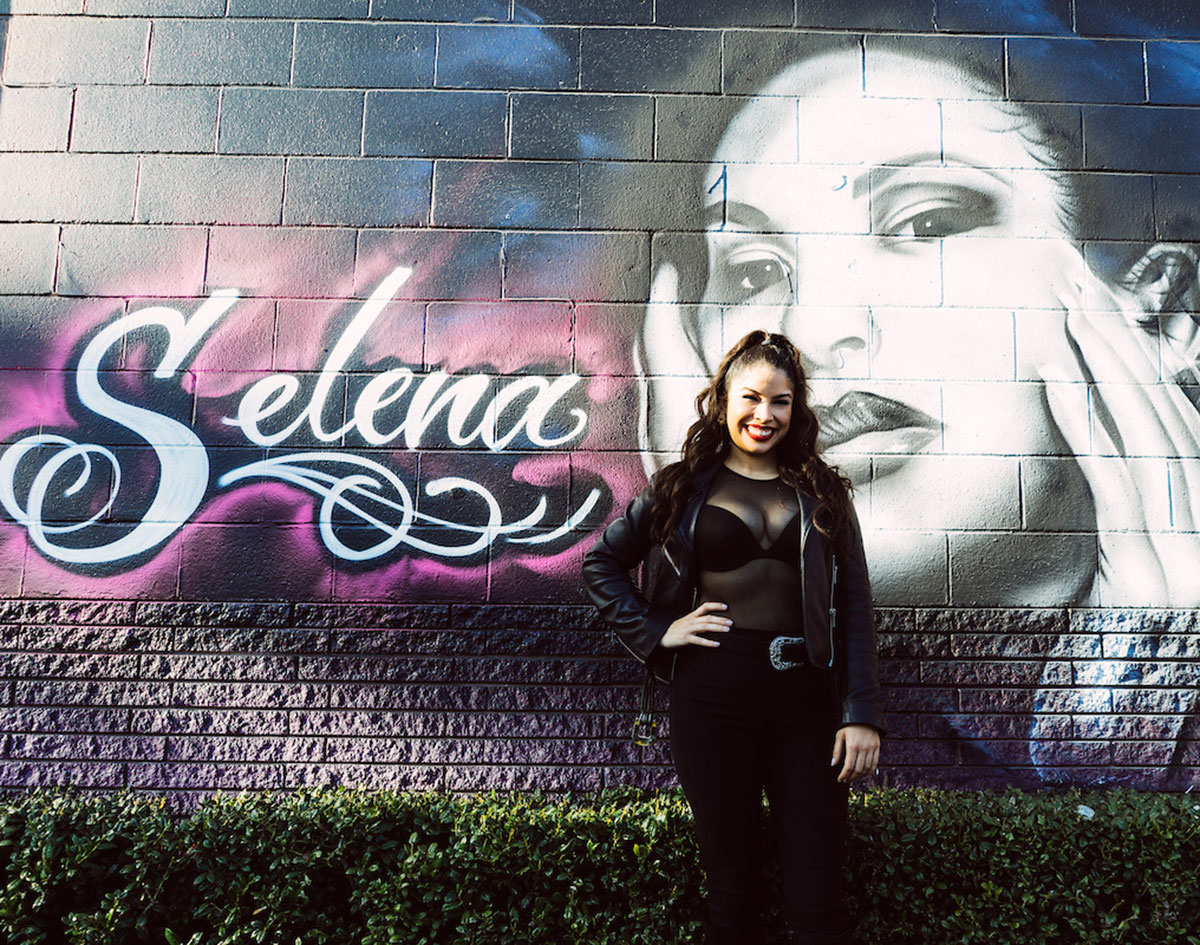 Do Anything For Selena, LOL at the Dallas Comedy Fest, Take Hozier to Church, Close Down the Beauty Bar, Putter Around With Some Rockers and Mods & More.

Now that the full text of the Mueller Report has been released, a good chunk of your weekend is now accounted for.

Let’s face it — it’s going to take a bit to get through the hundreds of pages.

But when you all-stars are done with all that and ready to go play, we’ve got loads of ways to fill in the rest of your weekend’s gaps. — Cory Graves

Guster at House of Blues
It’s in this band’s nature to overachieve and one-up itself. Guster has sold out a 33-date college tour, sold out New York’s Radio City Music Hall. These guys dropped a new album, Look Alive, and hope to return to their late ‘90s college radio glory days. — Mira Scott

Hozier at South Side Ballroom
Andrew Hozier-Byrne is perhaps best known for his 2013 single “Take Me to Church.” It’s been over five years since the release of that single, and now he is touring in support of his upcoming sophomore full-length Wasteland, Baby! — Garrett Gravley

Houses at Three Links
The electronic duo fronted by Chicago producer Dexter Tortoriello became a Pitchfork darling in 2010, following the release of a handful of singles and their signing onto Lefse Records (whose alumni includes How To Dress Well, Neon Indian and Youth Lagoon). Tortoriello was subsequently noticed by Diplo, who signed his solo project Dawn Golden to his Mad Decent label. — GG

The Browning at 2513 Deep Ellum
EDM meets metalcore at the hands of this forward-thinking KC electronicore outfit. Extortionist, BETRAYING THE MARTYRS, The Human Experiment, Dispositions, Navajo, Commit & Conquer, All That Is Flesh and Saints Can Lie all cram sets into this over-stuffed bill, to boot. — CG

Brad Paisley at WinStar World Casino and Resort
Brad “Please Forget About That LL Cool J Collaboration” Paisley is downgrading from the usual arenas and playing to a much smaller room for this one. — GG

Leslie Odom, Jr. at Meyerson Symphony Center
All weekend long, the Dallas Symphony Orchestra will be sharing their stage with Leslie Odom, Jr., the award-winning Hamilton performer. Together they’ll play songs from Broadway, jazz and more staples everyone loves. — MS

Moneybagg Yo at Canton Hall
Moneybagg Yo is the stage name of prolific Memphis rapper Demario DeWayne White, Jr, who signed onto Yo Gotti’s label CMG in 2016. Following the release of a whopping 16 mixtapes since 2012, he released his debut studio album Reset in November 2018. — GG

Jeezy, Trapboy Freddy at Gas Monkey Live
Twenty years in, Yung Jeezy isn’t so young anymore. Before he drops a collaborative album with Master P, he’ll be the veteran on this co-headlining bill alongside Yella Beezy squad member and South Dallas’ own Trapboy Freddy. — CG

Disco, TX // Studio 54 at 7 For Parties
In honor of the recent Studio 54 documentary is a party themed after the famed disco spot. This one, however, requires costumes for entry, and the promotors say they gotta be good ones, too. Oh, and no afro wigs on white folks. Like the namesake club, everyone is welcome here and that racist shit ain’t tolerated. — CG

214Selena Weekend at Tyler Station
Sour Grapes and De Colores Collective’s sixth annual, weekend-long 214Selena celebrations kick off with a Selena-dedicated karaoke night from 6 p.m. to 10 p.m. at the new-ish Oak Cliff Brewery at Tyler Station. As with all 214Selena events — aside from the Saturday biopic screening at Texas Theatre (more on that in a moment) — this one is free to attend. — Pete Freedman

Foam Wonderland at Texas Live
The biggest foam party production in the world boasts a lineup of TroyBoi, Rusko, Wooli, ARIUS and Kaivon. Just remember it’s a game day, which will not only effect traffic, but the parking situation and prices. So plan accordingly. — CG

Band of Heathens at Kessler Theater
With help from local heroes the Texas Gentlemen, these Texas rockers kick off a two-night stand in Oak Cliff. If you’re having trouble deciding which night to attend, know that this show is all standing, while Sunday’s repeat affair will have some chairs. — CG

Chucho at Armoury, D.E.
These guys almost never play anymore, and when they do, it’s almost always in Fort Worth. So don’t let a good, rare, thing pass you by. — CG

Rockers vs Mods
Friday kicks off three days of scooters and whatnots, meeting and greeting at the Belmont Hotel and then riding off in a cluster over to Eight Bells Alehouse in Expo Park. — CG

Dallas Comedy Festival
Slated for Friday is a panel featuring Maribeth Monroe from Workaholics, among others, plus various improv and stand-up shows an a taping of the Pen Pals podcast with Daniel Van Kirk and Rory Scovel. — CG

Cirque Italia at Town East Mall
A cirque that’s no “du soleil” brings its “Water Circus” and the 35,000 gallon tank that gives the show its name over to Mesquite all weekend. — CG

BODY UP!: Last Dance at Beauty Bar
With work on its new location on Main Street in Deep Ellum finally nearing completion (it’ll be located right next door to the country music club the Blue Light), Beauty Bar owner Brooke Humphries announced that this will be Beauty Bar’s last week at its home of the last eight years. She says she’s wholly focused on Henderson’s closure at the moment before turning her attention to the Deep Ellum spot, but notes that she plans to open the new spot within a few weeks of the old location’s end — the dance club’s final nights along the extended Knox-Henderson strip will strictly feature the same recurring weeklies that have been Beauty Bar’s bread and butter for the last few years. — PF

Avant Identity at 723 Fort Worth Ave
Some “weird” performance art meant to explore the concept of identity — brought to you by a City of Dallas cultural grant. It happens both Friday and Saturday nights. — CG

The Tenderloins at Toyota Music Factory
The Tenderloins, aka the comedy troupe whose members goad each other into hidden camera pranks on TruTV’s Impractical Jokers will be on the stage, doing stand-up and showing never-before-aired clips from their show. — CG

Dallas Oddities & Curiosities Expo at Centennial Hall
This expo is for lovers of taxidermy, creepy antiques, bone jewelry, preserved specimens and objects better suited for one of Ripley’s expeditions. Fittingly, sideshow performances and human suspension demonstrations will be part of the proceedings, too. — CG

214Selena Weekend
The 214Selena parties continue with a three-pack of Saturday events: The revelry kicks off with a free-to-attend Selena-centric art show from 5 p.m. to 8 p.m. at the Oak Cliff Cultural Center; and is capped off by a Club Dada-hosted Selena bash from 10 p.m. until 2 a.m. that will feature members of the Faded Deejay crew on the ones and twos, and will be free to get into prior to midnight. — PF

Rita Ora at The Statler Ballroom
The bootleg Lily Allen is on tour behind her second album in six years. — CG

Shea Abshier & the Nighthowlers at Blue Light
The “Hot Mess” Texas country rockers are about a month away from releasing their sophomore record. It comes out on April 20. Because, yeah, they’re that kind of band. — CG

DaBaby & S3NSI MOLLY at 2513 Deep Ellum
Hardcore NC rapper da Baby Jesus is fresh off shooting and killing a would-be mugger in a Walmart parking lot. He performs alongside one of Arlington’s own at this own. — CG

Texas Pie Fest at Summerfield at Tate Farms
Pies, and vendors, and pies, and a car and truck show, and pies and even more pies. — CG

Festival of Joy at Klyde Warren Park
With its roots in the bhakti tradition, this second annual celebration of Indian culture is intended to spark joy in you. — CG

Adventure Club at Stereo Live
As opposed to the long-running KDGE program that was once hosted by Josh Venable, this Adventure Club is a Canadian dubstep duo. Like Skrillex, who the group cites as an influence, these musicians were also members of a Montreal-based pop-punk band in a former life. — CG

Mike Dillon vs New Bohemians at Deep Ellum Art Co.
In lieu of their usual face in Edie Brickell, the NeBos will be joined by renown percussionist Mike Dillon. A band made of Spoonfed Tribe members opens. — CG

Rockers vs Mods
On the agenda for Saturday are a lunch and tour at Moto Liberty, a group ride over to Lee Harvey’s for lunch and a matinee rock show, an award ceremony and a night ride over to the Lucky 7 Clubhouse. — CG

Ali Wong at Winspear Opera House
In summer 2018, Ali Wong’s comedy special Ali Wong: Hard Knock Wife premiered on Netflix, and Forbes praised it by saying it “presents a new gold standard for comedy.” Wong also made frequent appearances in shows such as American Housewife and Inside Amy Schumer, and even paid some dues as a writer for Fresh Off the Boat. Other film/television credits of hers include Ugly Delicious, Ralph Breaks the Internet, Bojack Horseman and many others. — GG

Dallas Comedy Festival
Up Saturday are industry panels, including one on how to build a brand, plus various improv and stand-up showcases and a taping of the Sinisterhood podcast, among other festivities. — CG

Dallas Donut Festival at Four Corners Brewing
Nothing fills us up like craft doughnuts and craft beers. We have a feeling it’ll be next to impossible leaving here without feeling miserably stuffed. — CG

EyeHateGod at Gas Monkey Bar N’ Grill
EyeHateGod carries so much ubiquity in metal that Phil Anselmo himself considers them a significant influence on Pantera’s later output. Their unique take on sludge metal combines blues riffage with the styles of Black Flag, Flipper, Celtic Frost, Black Sabbath, Discharge and Melvins. Despite such a varied palette of influence, they execute it so tastefully that they, along with other sludge metal contemporaries such as Crowbar and Acid Bath, have given New Orleans a reputation as a metal hotbed. The Obsessed, Mothership and Baring Teeth open. — GG

Taking Back Sunday at House of Blues
The well-worn rock outfit kicked off 2019 with the release of Twenty, a compilation record marking the band’s 20th year together. This is the tour in support of both these things. — CG