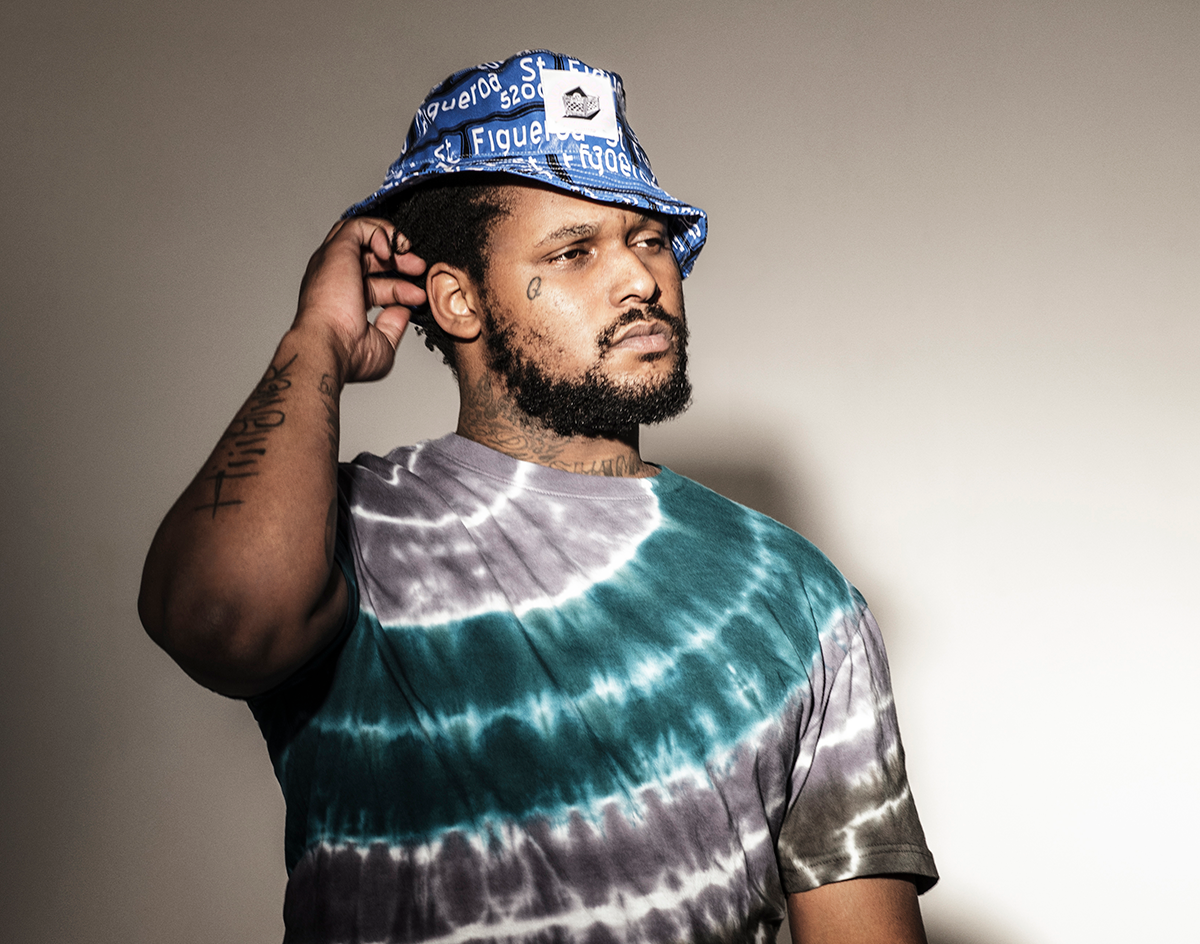 Keep Your Hands On The Wheel For Schoolboy Q, Takeoff To Terminal Paradise With Big Thief And Find A Heart To Break For Kim Petras. Plus More!

On the latest stop of his being booed across the U.S. tour, President Donald Trump made an appearance at Madison Square Garden for UFC 244 on Saturday to mixed reactions.

The booing comes after Trump’s attendance at Game 5 of The World Series in the same week was met with overwhelming jeering, including a chant of “lock him up!”

Although various videos circulating on Twitter show a mix of both cheers and boos at the UFC fight, Donald Trump Jr. was triggered enough to decry coverage of the event his favorite label of “fake news.” And right on schedule, the other Trump son tweeted about fake news too, or something like that. We understand they were just excited to be acknowledged by daddy for once, though, so we won’t go too hard on them this time — the videos speak for themselves.

You, however, shouldn’t hold yourself back from going hard for at least one of the things on this list of things to do in DFW this week. We’re pretty sure no one will be calling for your imprisonment, either. — Alec Spicer

The Roast of Scott Beggs at Trees
The Three Links owner and music industry veteran turns 50 this November, and to celebrate, Trees is throwing an event like the Friars Club Roast, only less prestigious and with bands, dunk tanks and raffles. — GG

Rob Bell at Canton Hall
Rob Bell was a pastor until 2012, then went on to write the New York Times bestseller “Love Wins.” He also hosts a podcast that is lazily titled “The Robcast.” — GG

Lil Tecca at Granada Theater
Most popular rappers don’t wear braces like Lil Tecca, but most popular rappers also aren’t 16 years old. He was originally set to play the much smaller Cambridge Room at the House of Blues, but then he dropped a little track called “Ransom.”  You might’ve heard it, being that it’s been in the Billboard top 10 for a few weeks now. — DV

Kim Petras at House of Blues
The new underground-pop princess just dropped a spooky record called “Turn Off the Light,” but nothing on it is scarier than the fact that she’s still working with notorious producer Dr. Luke. #FreeKesha — DV

Katastro at Dada
Opening for this radio-ready indie pop group is a band with the best name we’ve seen all month: Bikini Trill. — DV

Trisha Yearwood at Bass Performance Hall
If your mom was a country music fan in the ’90s, she’s probably already bought her tickets to this one. — DV

The Allusionist Podcast Live at Sons of Hermann Hall
A linguistics podcast might not sound that appealing on paper, but the way host Helen Zaltzman connects the topic to pop culture and comedy gives it a bigger audience than people who dissect sentences for fun. — DV

North Texas Beer Week
North Texas Beer Week has officially begun, and there are so many events going on throughout the week, we don’t know how you’re going to decide on which ones to go to — pint nights, silent raves and chili cook offs, to name a few. — DV

Big Thief at Trees
A few months following Buck Meek’s tour with Jeff Tweedy, his band Big Thief will hit the road this fall in support of its new album, U.F.O.F. — GG

Kero Kero Bonito at Canton Hall
Sarah Bonito and Co. are still reeling in from their critically-acclaimed 2018 LP, Time ‘n’ Place. After having played Coachella, and following scheduled appearances at just about every major music festival in Europe, the trio will swing by the Metroplex for a second time as part of an eventful year-closing tour. — GG

Titus Andronicus at Club Dada
Ever since New Jersey punk outfit Titus Andronicus’ signing to Merge Records, the band has released two albums – The Most Lamentable Tragedy and A Productive Cough. Neither quite lived up to the expectations set by 2010’s The Monitor. — GG

Scotty Sire at House of Blues
Yet another mediocre figure in the crowded field of Youtubers-turned-pop-musicians. His Instagram handle is @vanilladingdong, which… we’ll leave it at that. — DV

Ximena Sarinana at House of Blues
Actors whose singing careers actually work out are the exception to the rule. (But don’t let that discourage you, Jeremy Renner.) And with her Grammy-nominated folk-pop, Mexican actress Ximena Sariñana is part of that exception. — DV

Schoolboy Q at South Side Ballroom
Kendrick and SZA get most of the shine on Top Dawg Entertainment, but SchoolBoy Q is another dependable MC on its roster. Opening the show is Nav, who hangs in similar circles but is definitely not in the same league as Q. — DV

Wolf Eyes at Rubber Gloves
At this point, the Detroit noise duo might be more famous for its Instagram shitposts than its tunes. — DV

Crisman x Skirts at Good Records
Good Records might have moved from Lower Greenville to Garland Road, but that hasn’t slowed it down fro booking solid live music. The DFW bedroom pop bands Crisman and Skirts will be playing a free co-headlining gig on the green astroturf stage. — DV

Melanie Martinez at The Pavilion at Toyota Music Factory
Didn’t she get cancelled? — GG

Shoreline Mafia at House of Blues
The Bay Area has a long heritage of bouncy, yet gritty “hyphy” hip-hop, and this crew is keeping it strong. — DV

Our Last Night at Trees
Do you remember those “Punk Goes [x]” compilations from the mid-late 2000s where every Hot Topic emo band of the era would do cheeky covers of pop and hip-hop songs? These guys have made their whole career on that niche. — DV

Mat Kerekes at Club Dada
Usually Mat’s the frontman for the emo group Citizen, but on this show he’ll be delivering the sad jams solo. — DV

Glitch Black at Three Links
This synth-wave group is very devoted to the whole vintage technology aesthetic — the press bio for their new album is written in binary code. — DV

Counterparts at Gas Monkey Bar N’ Grill
The frost-bitten arctic wasteland of Ontario has spawned forth this metal-core group. Bundle up. — DV

Zoé at Bomb Factory
Fresh off its first Grammy win, the Mexico City space-rock group is landing in Dallas for close encounters of the psychedelic kind. — DV

Stonefield at Double Wide
If the band Haim had more dark, stoner sisters, they might sound like these Aussie psych-rock sisters. — DV

Windhead at Ridglea Theatre
Windhand was initially slated to open for Russian Circles at Deep Ellum Art Co. on Saturday, November 9, but now it’s headlining this show two days prior. Per the Relapse Records website, they have not announced a November 9 show. Weird! — GG

Sinead Harnett at Granada Theater
Shimmering British R&B, like Sade but if she replaced her backing band with GarageBand. — DV

Wizard Fest at Trees
No matter how lame J.K. Rowling’s tweets get, people still can’t get enough of Harry Potter. Wizard Fest is a pop-up party to help satiate that hunger, featuring trivia contests, cosplay and wizard-themed music. Wizard-rock is a real genre, you know. — DV

The KVB at Club Dada
This U.K. duo sounds like The xx hooked up with the Jesus & Mary Chain and had a very depressed kid. — DV

Flipper at Three Links
Kurt Cobain had impeccable taste in music, from the late Daniel Johnston to punk band Flipper, which is reuniting for its 40th anniversary. As a special treat for noise-rock heads, David Yow of the Jesus Lizard is filling in on bass for these shows. — DV

Ashley McBryde at Shipping & Receiving
Ashely McBryde’s album might not have beaten Kacey Musgraves’ Golden Hour for the  Grammy for Best Country Album, but even just losing to Kacey is an honor in itself, we’d argue. — DV

Torche at Rubber Gloves
Someone could argue that the ideal way to listen to stoner-metal is at home is quite literally while stoned. But there’s something to be said for the contact high of a live show. — DV

Tedeschi Trucks Band at Majestic Theatre
The blues-rock supergroup has over ten members in its live band, which makes Arcade Fire look like small potatoes. — DV

Robyn Hitchcock at The Wild Detectives
Hitchcock’s witty tunes like “Mad Shelley’s Letterbox” and “I Often Dream of Trains” read like poems set to jangly folk-rock, so it makes perfect sense he’s performing at the Wild Detectives bookstore. — DV

Angela Yee’s Lip Service at House of Blues
The Breakfast Club co-host’s podcast was a hot topic on Twitter recently, after R&B singer Tank appeared on the show and argued that just because a guy gives another guy head, doesn’t mean he’s gay. Will this live episode be just as provocative? One can only hope. — DV