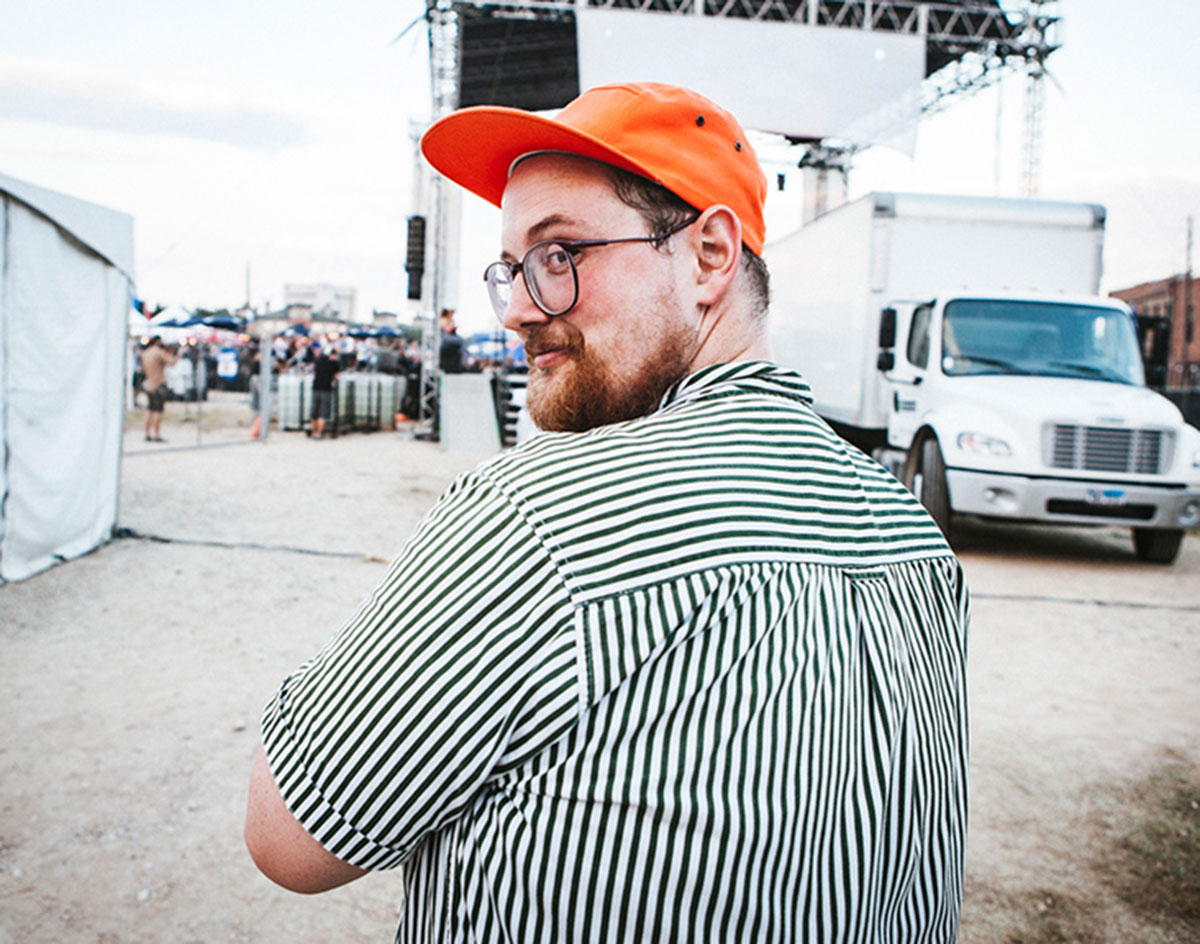 Get Weird With A Dan Deacon-Led Dance Party At The Oak Cliff Film Festival, Test The Waters With Smallpools At The House Of Blues And So Much More.

President Trump debuted a fresh new haircut while making an appearance at a Virginia church over the weekend  — and we’re with Jezebel in thinking that it actually looked pretty good! A marked improvement over his comb-over side-sweep, the new look had a slicked-back, hockey hair appeal to it.

Alas, it appears as if the new ‘do was short-lived: By Monday morning, the president was back to his usual hairstyle.

That’s too bad, we think. See, here at Central Track, we’re all about trying new things. If you consider yourself of the same mind, but also a little gun-shy when it comes to anything follicle-related, perhaps you’d be better off trying something new in the form of attending one of the many cool happenings going down around town these next few days.

Sound good to you? Well, the below compilation of events should help you get started. — Pete Freedman

TTNG at Club Dada
The Oxford experimental rock band, and one of the most notorious bands on Sargent House’s roster, returns to Dada for a show opened by Austin’s The Kraken Quartet. — Garrett Gravley

Smallpools at House of Blues’ Cambridge Room
These Los Angeles indie-poppers appear to have ditched the album model since dropping their RCA-released debut LP, Lovetap, back in 2015.  The three-piece has put out seven singles since 2017, most recent of which is a May-released joint called “SYCS” that sounds like it would’ve made the band among the buzziest, must-see performers at SXSW in 2010. — PF

Father of the Bride at The Magnolia
To be clear: This is the 1950 comedy starring Elizabeth Taylor, not the 1991 remake of the same name starring Steve Martin. — PF

Earth at Club Dada
This Seattle outfit is considered to among the pioneers of drone metal, having influenced other trailblazers of the genre such as Sunn O))) and Boris. They also had a famously tight friendship with Nirvana: Guitarist Dylan Carlson was Kurt Cobain’s roommate and best friend, and unfortunately even purchased the shotgun Cobain used to commit suicide — a subject that Carlson has understandably refused to discuss in interviews. Even without the affiliation with Nirvana, Earth remains a noteworthy act for its infusion of minimalism and drone music into metal — a distinctive interpretation that finds the band’s name offered uttered the same vein as Melvins and Godflesh. Helms Alee opens. — GG

Reverends, Mother Tongues and Mr. Breakfast at Dan’s Silverleaf (Denton)
Denton’s really bringing it this Wednesday night, huh? At this show, Atlanta shoegaze act Reverends tops a bill featuring two of the college town’s most noteworthy own purveyors of the same sound. — PF

Cub Sport, Minor Poet at Three Links
Most of the press surrounding indie pop outfit Cub Sport seems to hinge on the fact that its band members identify as queer, with members Tim Nelson and Sam Netterfield having tied the knot in 2018 following same-sex marriage being legalized in their native Australia in 2017. Feels a little reductive to just leave things there, though, considering the pop melodies, intricate arrangements, sharp production and universal themes of love that can be found throughout the band’s earlier-this-year-released, self-titled, third LP. That said, props to the group for proudly talking its truths in the press whenever asked. — PF

The Big Lebowski at Sundown at Granada
Far as we can recall, there aren’t any rugs to help tie the rooftop above this venue together. Still, any chance to hand with The Dude sounds like a decent time. Order a white Russian, kick your feet up and enjoy this Coen Brothers classic which somehow came out a full 21 years ago. — PF

Jaret Goes To The Movies Live at Lava Cantina (The Colony)
For four straight days, North Texas pop-punk heroes Bowling For Soup will be taking over the stage at The Colony’s Lava Cantinia to celebrate the band’s 25th anniversary. Kicking off the celebration is a live recording of frontman Jaret Reddick’s film-focused podcast, which will present a screening 1985 cult classic The Last Dragon, as well as interviews with that film’s star, Taimak, who will be in attendance to answer Reddick’s many questions.  — PF

Full Of Hell at Ridglea Theater (Fort Worth)
Relapse Records signees Full of Hell return to Fort Worth with Primitive Man and Genocide Pact right before all three play the Austin Terror Fest with Lightning Bolt, TR/ST and others. Since 2009, this group has made waves in the grindcore circuit and has even moved the genre forward with their Merzbow collaboration in 2014. — GG

John Paul White at Andy’s Bar (Denton)
One half of the Civil Wars, singer-songwriter John Paul White is doing the solo thing these days, touring in support of his rustic, newly released The Hurting Kind LP. — PF

Jacob Latimore at Prophet Bar
As an actor, he’s scored roles in films like The Maze Runner and Detroit. As a performer, he’s a R&B performer in the vein of Trey Songz, but with a little trap influence thrown in. — PF

Pedro Capo at House of Blues
Behold the power of the remix: Whereas this Puerto Rican pop singer-songwriter’s 2018 smash hit “Calma” has more than 112 million views on Youtube at the time of this writing, its remix by Puerto Rican rapper Farruko has amassed 1.2 billion views. Maybe he’ll play both versions at this gig? — PF

Camilo Sesto at The Pavilion at Toyota Music Factory (Irving)
The 72-year-old ballad singer from Spain stops off in Irving as part of a North American tour meant to woo all your tias y abuelas. — PF

Weyes Blood at Club Dada
After releasing her last two records on Brooklyn’s Mexican Summer label, California singer-songwriter Natalie Mering’s fourth LP under her Weyes Blood moniker has earned its released via Seattle’s legendary Sub Pop label this past April. Called Titanic Rising, the new collection finds the performer coming off like more ethereal and orchestral Haim, if that group came up on Laurel Canyon types instead of ’80s and ’90s pop. — PF

SonReal at House of Blues’ Cambridge Room
In 2018, the rap-indebted Canadian pop singer-songwriter SonReal released a song called “No More” that bemoans cyber-bullying. Canadians are so nice, you guys! — PF

Republican Hair at Three Links
Surely among the best-named bands in Nashville, Republican Hair deserves a little credit for trying to infuse other genres into its sound, which is constructed upon a pretty sturdy pop-country base — but, really, just a little. You’d expect a band this hilariously named to have substantially more edge. — PF

Oak Cliff Film Festival Opening Night at Texas Theatre
The 2019 Oak Cliff film festival kicks off with a screening of the suburban American satire Greener Grass, for which the Upright Citizens Brigade alumni Jocelyn DeBoer and Dawn Luebbe who star and direct the film will be in attendance for a Q&A and meet-and-greet. Even cooler? That all will be followed by a DJ set from the ever-joyful Baltimore-based electronic musician Dan Deacon. Bring your dancing shoes. — PF