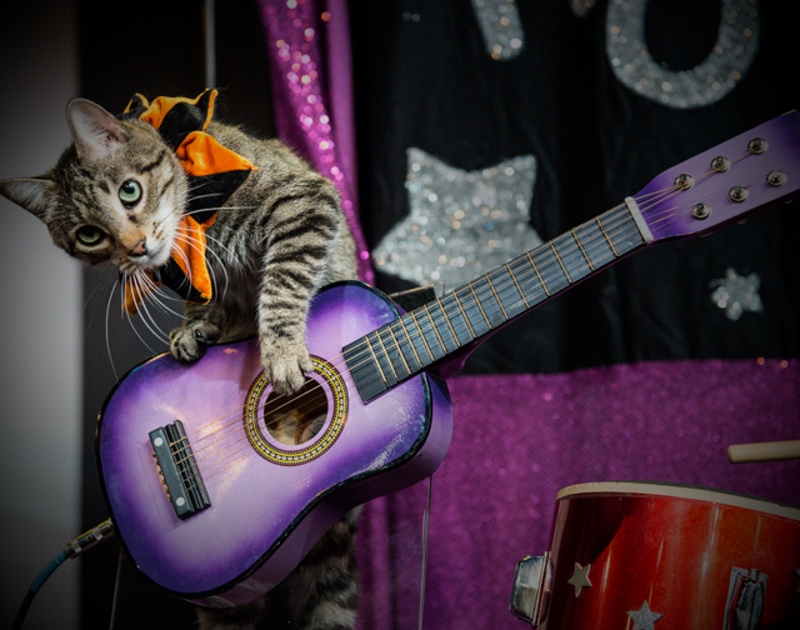 Drink the Wine With Murder City Devils, Toss a Frisbee at Mama Tried, Play a Literary Drinking Game at The Wild Detectives, Pay the Kitty at Texas Theatre and More.

Most of us get on something of a health kick to start any given new year. So as long as we’re working out more and eating better, we might as well do so as efficiently as possible.

I mean, if we’re going to lay of the pizza and burgers in favor of more vegetables, we should be getting the most bang for our buck to make the sacrifice feel all the more worth it. Good thing, then, that the folks over at Mel Magazine have ranked all the veggies in order of how healthy they are.

Another thing you can do to keep that healthy lifestyle up is to stay active. And the good folks right here are Central Track have ranked, chronologically, the best places to go out and keep things moving throughout the week. — Cory Graves

Cirque du Soleil: Amaluna at Lone Star Park
If William Shakespeare’s The Tempest were told via acrobats and a giant bowl of water it’d be this Cirque du Soleil proudction that’s been traveling the world the past seven years. It’s in town through March 3. — CG

A Clockwork Orange at Alamo Drafthouse (Cedars)
This vicious young hoodlum will be transformed out of all recognition. — Anthony Burgess

The Districts at Dada
Signed to Fat Possum in 2013, these childhood friends have gone from sounding like the Dylan’s electric years end of their dads’ vinyl collection to finding their own more indie rock-leaning sound three albums later. Deeper opens. — CG

The Wild Detectives Book Club: Cherry
This month, we’re discussing Nico Walker’s debut novel about an Iraq veteran who turns to robbing banks to pay bills once he gets back home. We hear it’s a comedy. Talk amongst yourselves. — CG

The Man Who Came to Dinner at The Magnolia
The Depression-era farce has been called a ”seminal gay film” thanks to Monty Woolley’s portrayal of the titular tempramental queer icon. — CG

Cheers to New at The Wild Detectives
A staged reading of the short play Well-Intentioned White People that also doubles as a drinking game. Raise a glass to that. — CG

And That’s Why We Drink at Addison Improv (Sold Out)
The comedic true crime podcast hits Dallas for live tapings on Tuesday and Wednesday, both of which are long sold out. — CG

Laugh Your MASS Off w/ Dave Stone at Main At South Side
The recurring bar-set stand-up show returns with headliner Dave Stone, who has done some voices on Squidbillies and co-hosted a podcast with Kyle Kinane. TJ Partridge, Hannah Harvey Vaughan and Tyler Elliott open and, as always, host Brian Breckenridge keeps the show moving. Tickets are $9 in advance and $12 at the door. — CG

COMMU.N.I.T.Y No. 1: Healing the Hood at The Wild Detectives
Here, feminist poet Melania-Luisa Marte kicks off a new monthly talk show series discussing issues of culture and the community. Guest No. 1 is Anthony Whitehead, the CEO of a juice company, who will be “discussing how transforming the conversation around food transforms our community and better equips us to uplift, educate, and create balanced lives for the future generations.” — CG

Serpiente: B L A C K I E at Regal Room
Houston experimental hip-hop artist, B L A C K I E, sets a new bar in terms of the “What the fuck did I just listen to” factor. Though B L A C K I E’s frenetic live performances have made him a somewhat niche figure, in equal measure they have drawn fame and a fair share of notoriety. For all intents and purposes, it’s a brand of unhinged artistry that must be seen to be believed. Lord Byron and Imperial Slaughter open, and DJs Storm, 1-800-Culture and Hesh Law make sure the sound never stops. — Calvin Cashen

Paul Varghese & Friends at Twilite Lounge Dallas (Free)
What good is telling jokes if not for having friends around to laugh at them? — CG

Amen Dunes at Deep Ellum Art Co.
New York-based artist Damon McMahon has put in his time for over a decade with his psychedelic-folk project Amen Dunes. His latest album Freedom was given the “Best New Music” label from Pitchfork, who raved the full-length as McMahon’s, “euphoric breakthrough”. McMahon’s earlier output is certainly more of an acquired taste than Freedom, but the album still possesses the same experimental undertones as his previous work. In January, Amen Dunes returns to Dallas for the first time in almost five years, having previously played City Tavern following the release of his 2014 full-length Love. — GG

Joan of Arc, El Ten Eleven at Dada
For Joan of Arc’s twenty-third studio album, the Chicago noise-poppers changed things up, this time allowing guitarist Melina Ausikaitis to take on lead vocal duties instead of usual frontman Tim Kinsella. It’d be unexpected if not for the fact that the band has built its twentysomething-year-career on keeping its listeners on their toes. Loopy, instrumental math rockers El Ten Eleven co-headline. — CG

The Amazing Acro-Cats at Texas Theatre
Some of the furriest fun to be had. This show will feature Tuna and The “Rock Cats,” a band of trained cats that put on quite the spectacle. Rest assured. The members of this feline troupe are all rescues and the show itself promotes fostering and adoption of all the baby kitties who need forever homes. — Obed Manuel

Taylor Tomlinson at Addison Improv
Dallas isn’t the only place where little girls are realizing their stand-up comedy dreams. Tomlinson got her start performing comedy while still in her teens in her native Canada. She’s since gone on to appear on several television programs, including The Tonight Show, Conan and Last Comic Standing. — CG

SMG4 Live at Trees
Witness the live creation of an episode of popular YouTube gaming show SMG4, which will be based partially on audience suggestions. — CG

Deep Ellum Wine Walk at Discover Deep Ellum
Buy a glass and get free refills as you sip and shop the hood’s unique mom and pop spots. Save $5 when you reserve your glass online in advance. — CG