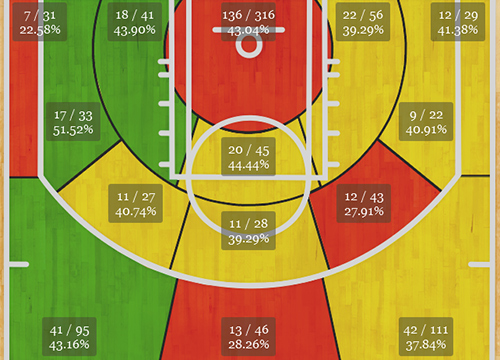 Could Brandon Jennings Be a Long-Term Answer To The Mavericks' Woes?

Two steps forward and two steps back. That's what we've been dealing with all season long with this year's Mavericks team.

Hell, sometimes it doesn't even matter if there are any steps forward at all. It's been a rough season, for sure.

The team's most recent stretch of games only follows this trend. Despite the strong play of the Dirk Nowitzki against the Lakers and Bucks, Dallas fell short in each of its contests this week. Against Los Angeles, Nowitzki scored 30 points, making 11 of 19 shots while pulling down 13 rebounds. On Tuesday night, when Milwaukee was in town, Nowitzki scored 21 points while shooting 50 percent from the floor and collecting 20 rebounds.

But, unlike in the game against the Lakers, Nowitzki actually had some help against the Bucks. Elton Brand also recorded a double-double on Tuesday, scoring 11 points and grabbing 14 boards, half of them on the offensive end. His largest contribution, though, may have been his defensive work in the game.

Seeing Brand's hustle against Milwaukee was great, no doubt. But it was also indicative of a larger problem that has been present throughout the season. The Mavericks are simply not on the same page as a unit during games. There's usually one or two players that step up on any given night, sure. But they're forced into the position of carrying the team when they do.

This may be true of most teams around the league. All NBA teams have players upon which they rely and lean — for Dallas, it's clearly Nowitzki — but good teams have a bevy players who know their roles and contribute when needed.

Dallas has players who fit this mold — Shawn Marion, Vince Carter and the aforementioned Brand, most obviously. But the rest of the players surrounding Nowitzki still haven't carved out defined roles for themselves on this roster. So: When one of Dallas' four dependable veterans isn't clicking (see Carter's 0-8 performance on Tuesday), team play quickly breaks down.

Carter has been playing well of late, but it was only a matter of time before his shots began to stop falling. Unfortunately, he's also one of the key ball handlers on this team. Therefore, when he struggles, players like Darren Collison, O.J. Mayo and Mike James try to overcompensate. The end result is often a turnover.

I have not been as harsh as some in my criticism of Collison and Mayo this season as others have been. I guess that's because I really believe that these players could legitimately develop into something good in the future if they remain on the Mavericks. As of right now, however, they are simply serviceable. Neither player has yet to define their role beyond a positional basis. Meaning? Collison is a point guard and Mayo is a shooting guard. That's it, really. Rarely do they serve as anything more.

This inconsistency is why there is so much speculation about what the Mavericks will do in the upcoming offseason. With Nowitzki rounding back into form — or at least looking that way, many believe, including the team in the Mavericks' front office — he will need another All-Star quality player on the roster to help buoy the team and increase their chances of becoming competitive again.

Fitting, then, that one player that has been all over the Mavericks' rumor radar was in the American Airlines Center last night. Brandon Jennings, Milwaukee's starting point guard, has been listed as a target of Dallas' since before the All-Star break. This just makes him a part of the very long list of every other notable player the Mavericks are expected pursue this summer with their ample financial flexibility, though.

It's also worth noting that Jennings, who is 23, will be a restricted free agent this offseason. Any offer that he receives from a rival team can be matched by the Bucks. Jennings, however, has publicly stated that he has been doing his research and will weigh his options once the offseason arrives. True to form, just before his game against Dallas, Jennings sang the praises of the Mavericks' organization.

“You've got an owner [Mark Cuban] who's so into his team,” he told the Dallas Morning News. “Every time you see the Mavs, you see him cheering or going crazy. They won a championship. They're about winning.”

But would even Jennings fit with the Mavs? Rick Carlisle was kind enough to dole out platitudes about his game when the subject was broached with him. But that hardly means anything.

The one major upside to Jennings' game is his ability to drive to the bucket. Dallas certainly doesn't attack the rim with much regularity, so it is clear to see why this aspect of Jennings' game can be considered appealing. Looking beyond that, however, one can see that Jennings leaves a lot to be desired.

I would usually do a breakdown of Jennings' shooting numbers from mid-range here, but they are rather abhorrent, except from the left side of the floor as one can see from this shot chart culled from from NBA.com:

ï¿¼
What has bolstered Jennings' shooting percentage this season, which stands at a paltry 40 percent, has been his three-point shooting from the right corner and above the break.

Dallas should think long and hard if they feel that Jennings can factor into the future of the franchise. His inefficient scoring and his average defensive abilities make him an odd fit for a team looking to improve and possibly find a future marquee player to lead the team into the post-Nowitzki era.

Fact is, Mayo and Collison's inconsistencies notwithstanding, Dallas already has a roster of youths looking to find themselves on the floor.

Would adding another such player into the mix really help anything? Or would it, once again, be just another step backwards for this team?

If this season's trends are any indication, we might already know the answer.