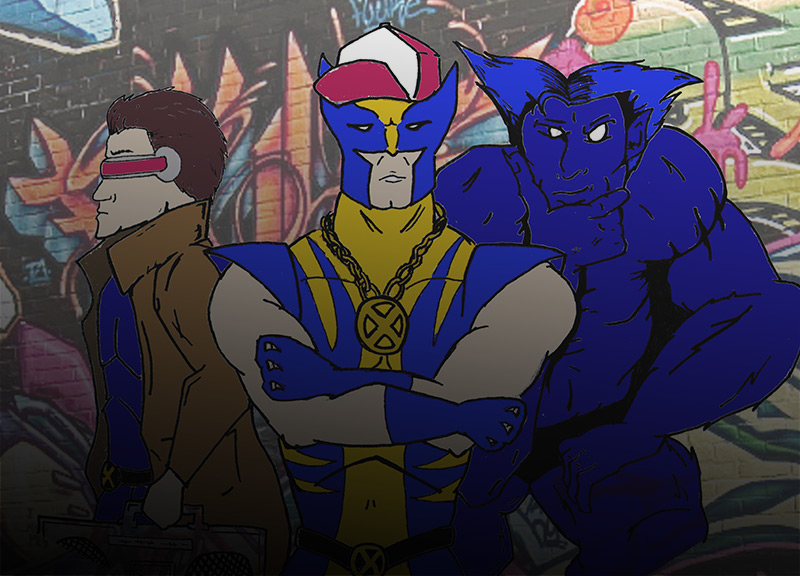 I refrained from judging Kitty Pryde's “Okay Cupid” for about as long as I was allowed to. But, when the moment finally came to think critically about the smash Internet hit, I was mostly just annoyed with the quite-popular-all-of-a-sudden young rapper. The song itself song is quite mundane and the video for it is somewhat cynical — although it's certainly an attention-grabbing move to have a 17-year-old girl rap about drug use and getting drunk dials, while juxtaposed with innocent images of her in a bedroom (complete with Hello Kitty pillows and several visible dolls).

In the end, it's all more than a little creepy. And yet, as it stands, Pryde's video is currently fairly inescapable in Internet circles.

It's all a little unusual is what I'm saying. What's not unusual, though, is Pryde's adoption of an X-Men character's name for her rap moniker. In this case, the would-be aspiring rapper from Daytona Beach, Florida, born Kitty Beckwith chose one that could walk through walls.

While this new Pryde can't walk through walls, she does have the ability to get inner-lip tattoos. And she's joining a long line of other musicians who have adopted comic book names into their onstage personae. For instance? Wu-Tang Clan's Ghostface Killah and Method Man also go by Tony Starks (a la Tony Stark) and Johnny Blaze (from Iron Man and Ghost Rider, respectively). And the inimitable Jean Grae (a la Jean Grey) no doubt drew from the power of the X-Men heroine (who would later go on to become Phoenix) when she was crafting her own persona. Then there's Houston rapper Judge Dredd, who took his name from the authoritarian-loving character from the UK comics. And there's the deceased Big Pun, who shortened his name from “Big Punisher” in his homage to The Punisher.

But there are other X-Men character names worth mining for rap gold, yeah? Here are five.

Magneto: First of all, I'd pretty much do anything for a helmet. Sometimes, I just go into bike stores and try on the helmets whilst whispering to myself, “I am the champ,” Magneto doesn't just have a helmet, though; he has a metal helmet. That is 20 different kinds of cool. Plus, another benefit of adopting the moniker “Magneto” is the ability to rhyme the name with “Neat-o,” one of the most common words I use to signify to strangers that I am a capable and in-control adult.

Blob: I know you might not be following me on this one — because his powers pretty much consist of being a giant, immovable blob — but, in a metaphorical sense, I could have a lot to gain by taking on the stage persona of “Blob.” Shout-out to the haters because, like the Blob, I'm an impenetrable lump of angst.

Gambit: Like Gambit, I also like to throw cards at people, albeit for slightly different reasons. Gambit also has the ability to charm people into liking him — a skill I admittedly lack — but if I refer to myself enough times as “Gambit,” perhaps I can convince those that surround me that he and I have something in common.

Darwin: Darwin has the power of “reactive evolution,” meaning he can change his body to adapt to circumstances and environment. I would call myself Darwin because, like the comic book character, I am incredibly adaptable. One time, I went to a karaoke bar and when I realized they did not have a version of “Fat Bottomed Girls” for me to perform, I quickly adapted and went for the much less convenient “Girls Just Wanna Have Fun.” The similarities Darwin and I share would create a powerful rap alias, I'm sure.